you are here: if it's hip, it's here » audiophile

While no one NEEDS a 50 000,00 € ($56,868.90 USD) headphone homage to the award-winning video game Assasins Creed: Origins, they do exist exist. And they are not for the subtle. END_OF_DOCUMENT_TOKEN_TO_BE_REPLACED

Wheel is about as minimal a record player as you can imagine. Only the Netherlands’ Miniot imaged it first. The turntable technology is all built into the platter and the functions are controlled by the center stick. Additionally, it can be used horizontally on a table or vertically. END_OF_DOCUMENT_TOKEN_TO_BE_REPLACED

Designers Fern & Roby of Richmond, Virgina have launched a $6500 turntable composed of a balanced bronze platter atop a cast iron plinth. The unusual audio (and heavy) component combines an industrial look with luxury. END_OF_DOCUMENT_TOKEN_TO_BE_REPLACED 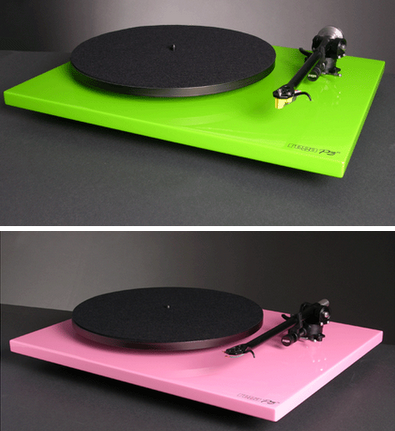 Rega Research Ltd. is a high-end audio equipment manufacturer based in the UK. Founded in 1973, the company’s name was formed of the initials of its two founders (RElph & GAndy). Historically Rega are best known for the Rega Planar turntable, but in recent years the company has diversified into a range of other hi-fi products. END_OF_DOCUMENT_TOKEN_TO_BE_REPLACED

Just because you like your music ‘Old School’ doesn’t mean the equipment has to harken back to the seventies and eighties. With the four technologically advanced, aesthetically pleasing modern designed turntables from montegiro, you can listen to music from decades ago without sacrificing a modern sense of style. END_OF_DOCUMENT_TOKEN_TO_BE_REPLACED

The 20 Wildest Speakers.
When I grew up, in the seventies, you basically had few choices when it came to speakers. The average consumer deliberated between JBL or Kenwood while the audiophile went for Cambridge Soundworks, Harman Kardon or Bang & Olufsen. Besides wattage output, your biggest deciding factor was whether or not you wanted wood paneled speakers or all black. END_OF_DOCUMENT_TOKEN_TO_BE_REPLACED