you are here: if it's hip, it's here » sports » Super Serious Super Bowl Ring Bling Info. New Details, Pics and Facts About All The NFL Championship Rings.

For the past few years I have published this post, updated to include the latest NFL Championship Ring. This year, I’ve also updated several of the specific jewelry design facts and added new images.

One of the most recognizable pieces of bling are given to the players of the National Football League’s annual championship game, the Super Bowl. Who makes them? Who gets them? What are they worth?

What’s On Each Ring?
The rings almost always include the team’s name, logo, and Super Bowl number (usually in Roman numerals), the final game score and the names of the particular player. Several include inscriptions of team’s mantras or mission statements such as the Baltimore Raven’s “Set the Standard.”

Most of the rings also have larger diamonds or diamonds made into the shape of the Lombardi trophy, that represent the number of Super Bowls that franchise has won.

For example, Pittsburgh’s 2008 ring has six trophies and six large diamonds, representing the six Super Bowls they have won to date: 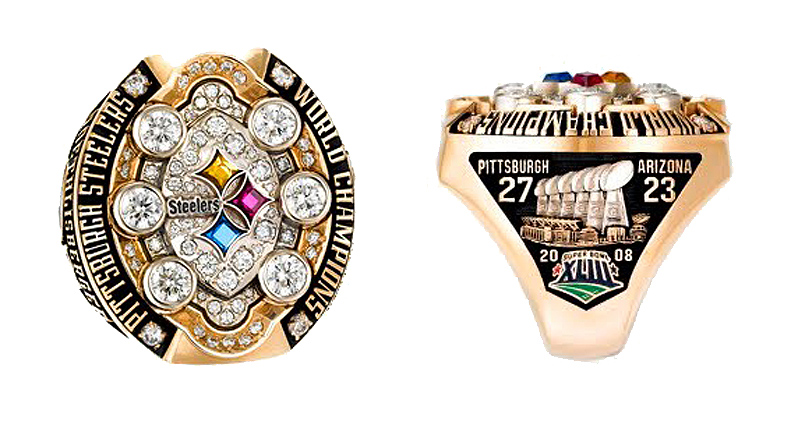 What Are The Rings Made Of?

Gold:
The rings are predominantly crafted of 10k or 14k yellow or white gold (in some cases, both). The varying degrees of yellowness in the gold depends both upon its purity and the other ores with which it is mixed (brass adds yellow, copper adds red, silver adds  white).

Diamonds:
Earth-mined white diamonds are clearly the stone of choice for the Championship rings. Many feature Marquis cut stones because of their resemblance to the shape of a football. Brilliant cut (round) stones in many sizes from solitaires to pave (chips) cover the majority of the rings. Some feature tapered baguettes and still others square or princess cut stones. 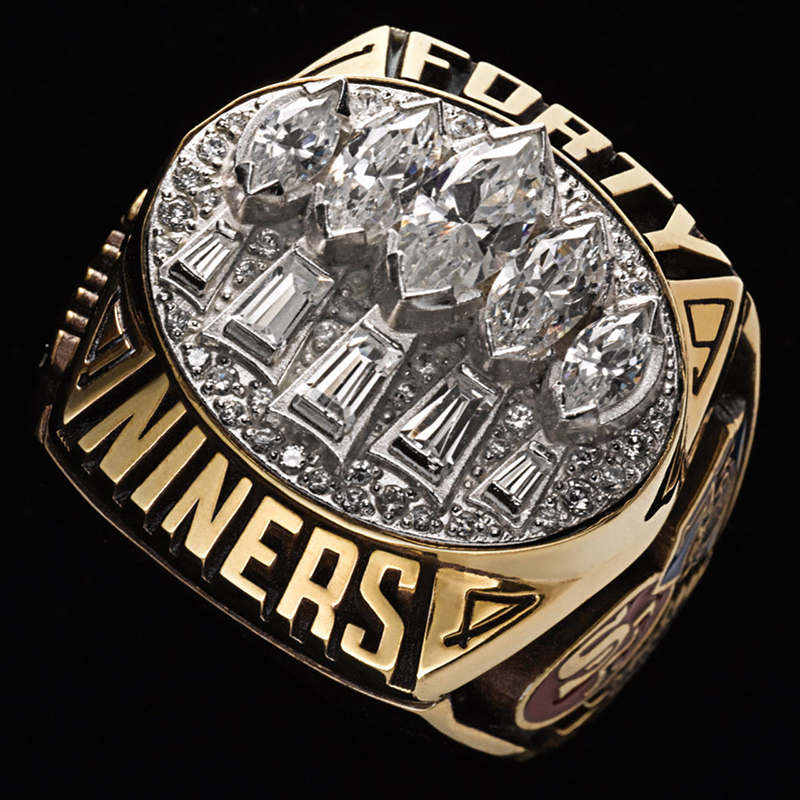 Enamel:
Many of the rings, especially the earlier ones, feature accents of single colored enamel such as the examples shown below: 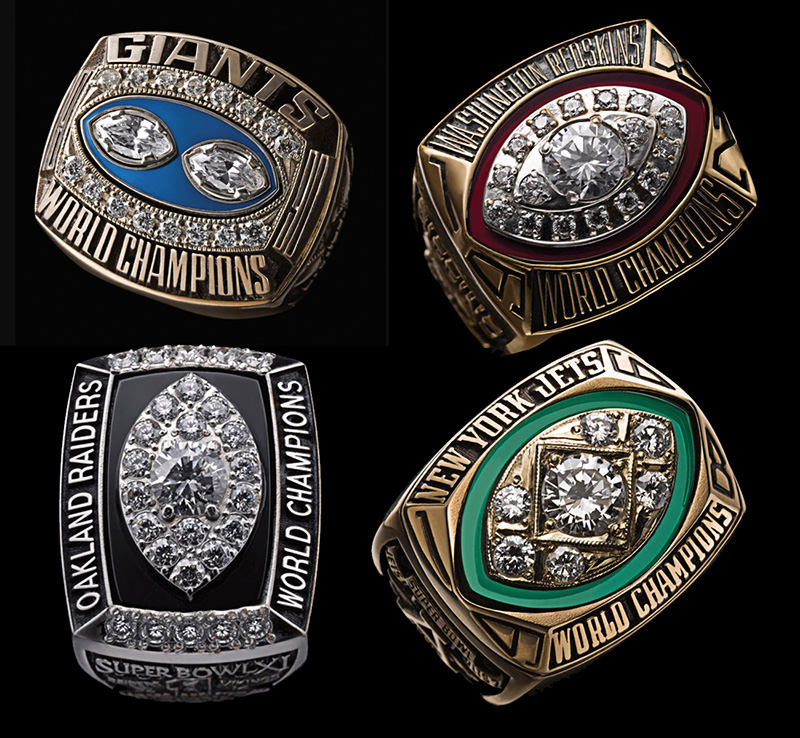 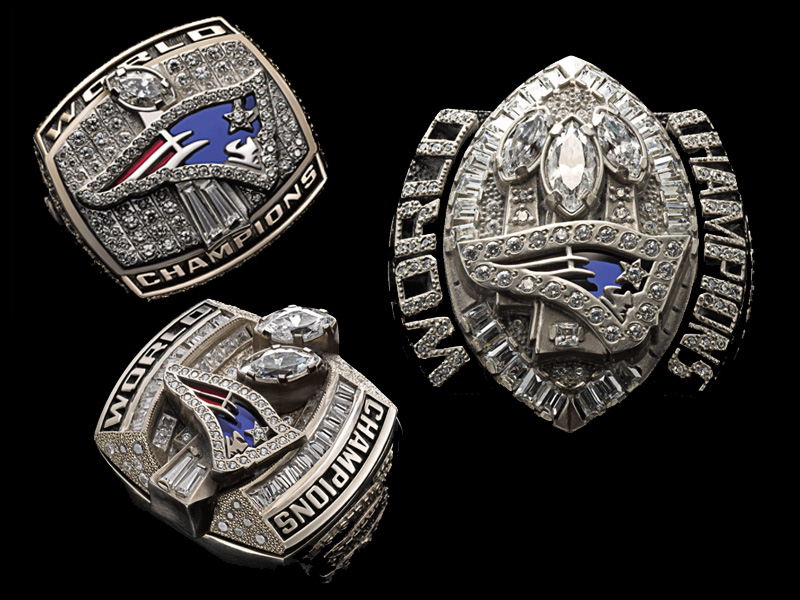 Colored Diamonds:
The Denver Broncos seem to favor colored diamonds as an accent. You can see the use of the cognac, brown or yellow diamonds found in their two consecutive Championship rings for Super Bowls XXXII and XXXIII, made by Diamond Cutters Int’l and Jostens, respectively: 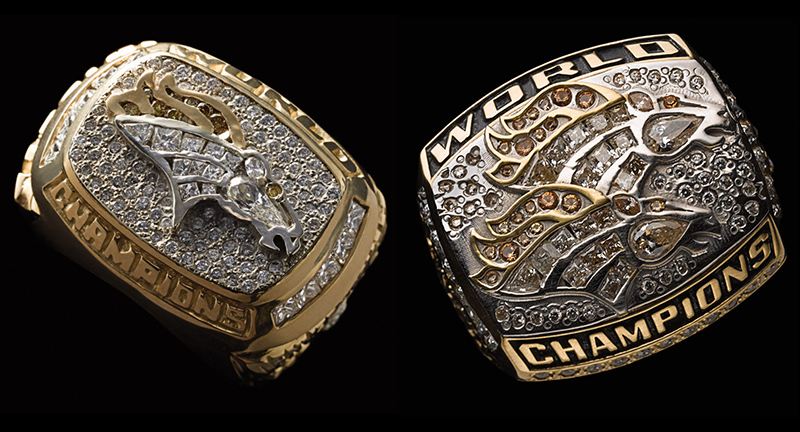 The Baltimore Ravens Championship Ring from Super Bowl XXXV, made by Jostens, has enamel, cognac or yellow diamonds and a ruby for the eye: 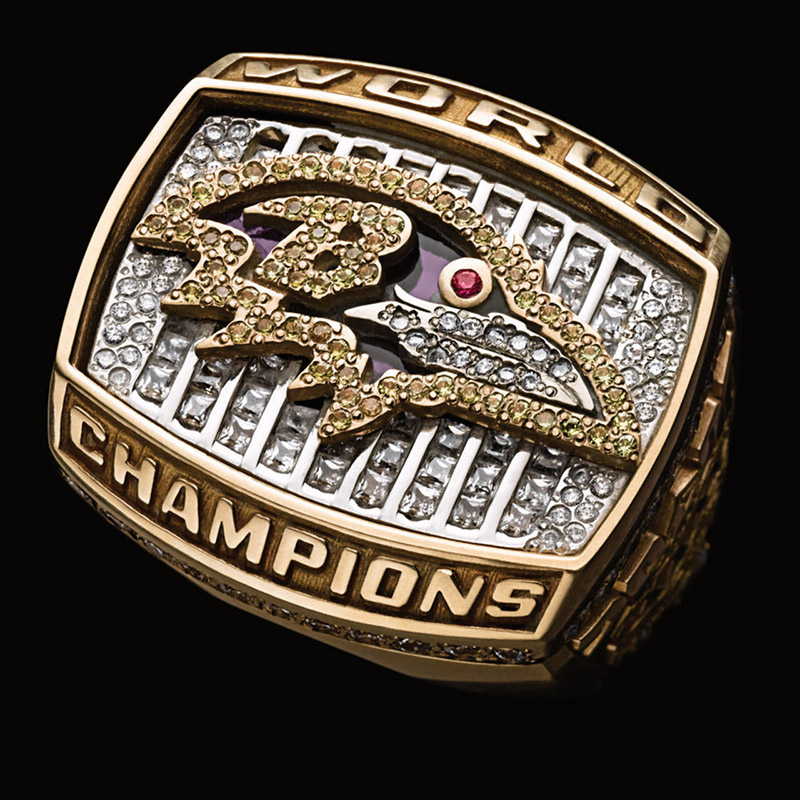 Rubies:
The Washington Redskins Championship Ring from Super Bowl XXII was the first to feature rubies along with diamonds and the first ring made by Tiffany & Co.: 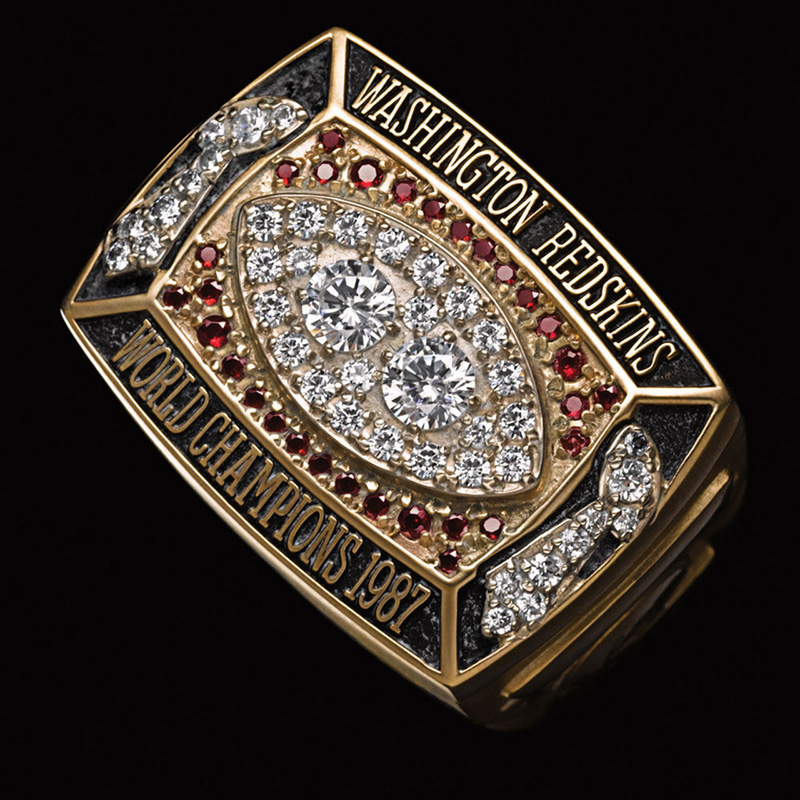 Sapphires:
Adding some blue to the bling, there are 37 sapphires (and some blue enamel) in the most recent ring for the NY Giants from Super Bowl XLVI by Tiffany & Co.: 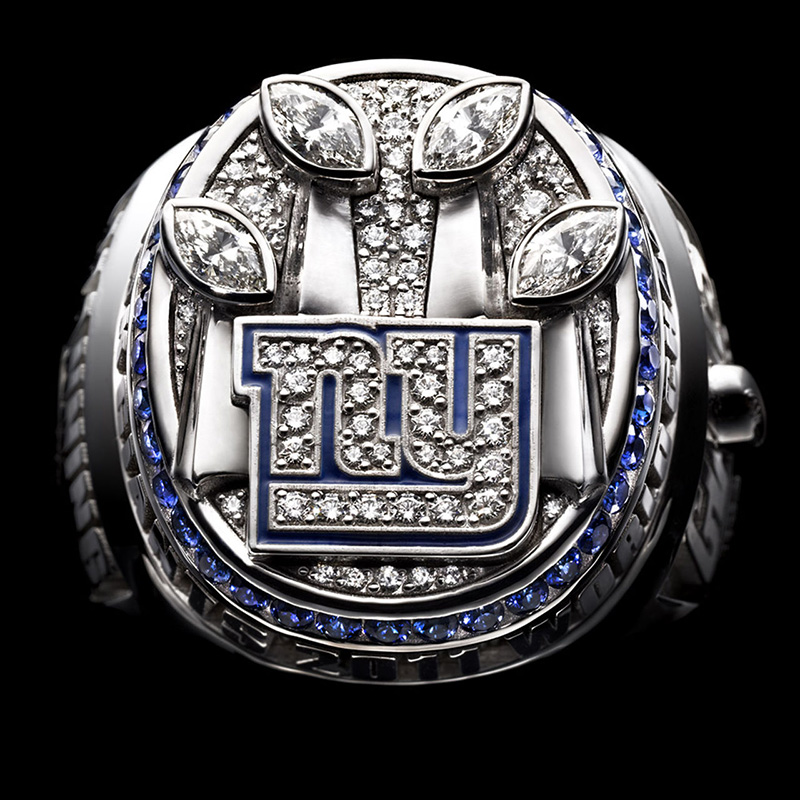 I don’t know how much the total carat weight varies from year to year or the actual market value, but here are some facts about the rings:

Who Pays For Them?

The NFL pays up to $5,000* per ring, with up to 150 rings per team. The NFL pays for the cost of 150 rings to the winning team, at roughly $5,000 apiece, depending upon the fluctuating cost of gold and diamonds. If the rings are over the $5,000 limit, the team owners must make up the difference.

* I suspect, with the increase in the price of gold over the past five years, this number is now considerably higher

Recent rings have been appraised in excess of $20,000, with some valued at $45,000. but manufacturers keep this information confidential.

The rings are made by the company of the winning team’s choosing. The majority of the Championship Super Bowl rings have been manufactured by Jostens in Denton, Texas. They’ve made 30 of the past 46 rings.

The rings are made after the game for obvious reasons, so this years’ ring is not included among the images below, shown in chronological order.