You may recall the disappointment when Starbucks released their annual holiday Red Cup in 2015. The cups lacked any adornment other than the color red and the Starbucks logo, sending the public and fans of the coffee chain into a dearth-design frenzy. They have remedied that this year with the release of 13 new customer designed Red Cups for the 2016 Holiday Season. 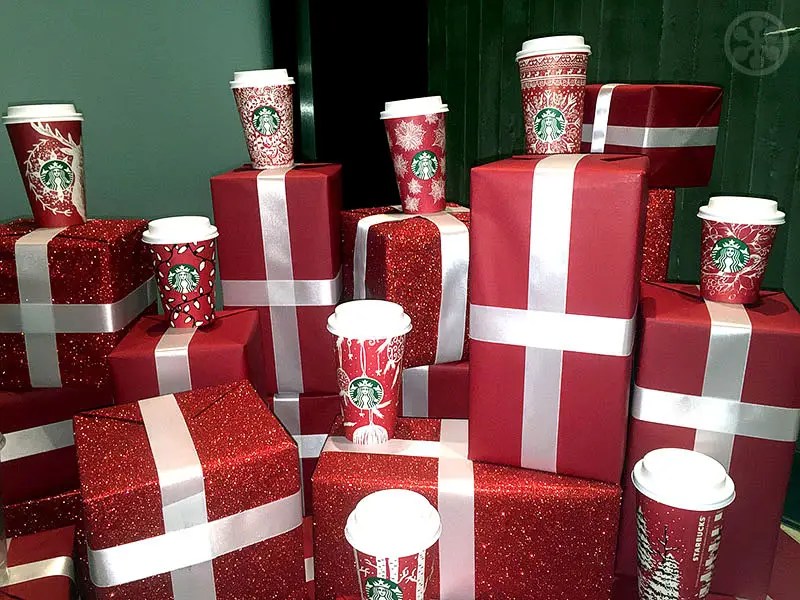 Since 1997, Starbucks has welcomed the holidays with a special red cup that celebrates the spirit of the season. Over the years, designs have ranged from the modern, using whimsical brushstrokes in bold colors, to the nostalgic, featuring mistletoe and ornaments.

This year, for the first time, Starbucks red cups feature designs created by customers with 13 distinct cups in the stores. Taking a cue from customers who had been using their red holiday cups as a canvas, last December Starbucks invited customers to share their designs on Instagram, receiving more than 1,200 individual submissions from 13 countries.

“We hope that this year’s red holiday cup designs express the shared spirit of the holidays as told by our customers,” said Sharon Rothstein, Starbucks global chief marketing officer.

For years Starbucks customers have been decorating their white cups (Starbucks even held a contest to support this creativity). Taking a cue from customers who had been using their red holiday cups as a canvas, last December Starbucks invited customers to share their designs on Instagram. From Illinois to Indonesia, Pennsylvania to Korea, Dubai to Ontario, in just eight days, Starbucks received more than 1,200 individual submissions from 13 countries. Many of the images were featured in an online cup collection.

“We were surprised and inspired by the amount of incredible art submitted by our customers. The designs were beautiful, expressive and engaging,” said Dena Blevins, creative director, Starbucks Global Creative Studio. “We quickly realized there was potential to use the customer-created art for our holiday cups.”

All the artists, their 2016 Starbucks holiday cup designs and what inspired them: 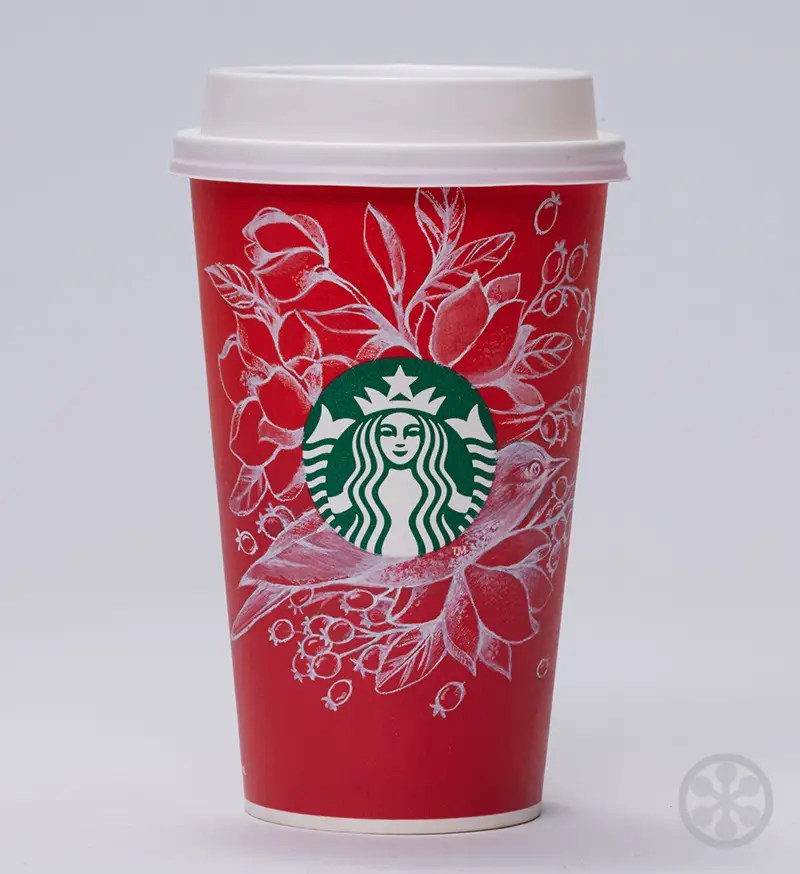 Florencia’s nature-inspired design depicts a bird in a field of magnolia flowers and berries. “The magnolia symbolizes friends and love and the hedge sparrow represents faith and creativity. I hope that my design inspires people to joyfully love life and be creative, even when faced with tough times.” 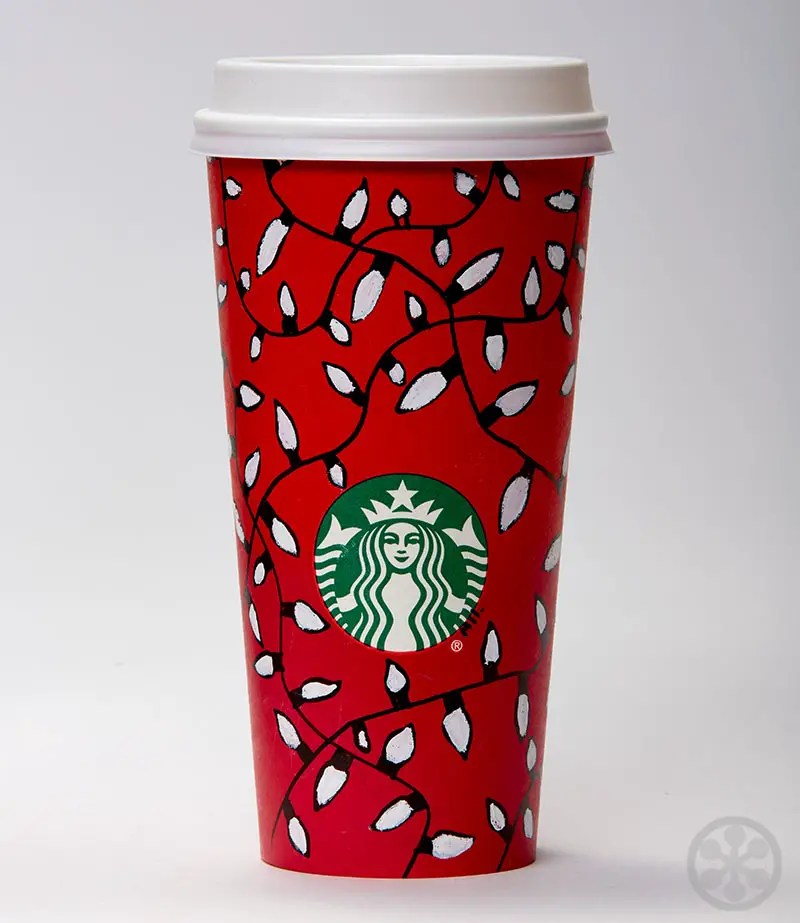 New York-based aspiring artist Maria loves creating bold, graphic patterns. “I was looking around my home for inspiration and when I looked at my tree I thought about how beautiful the lights were,” she said. 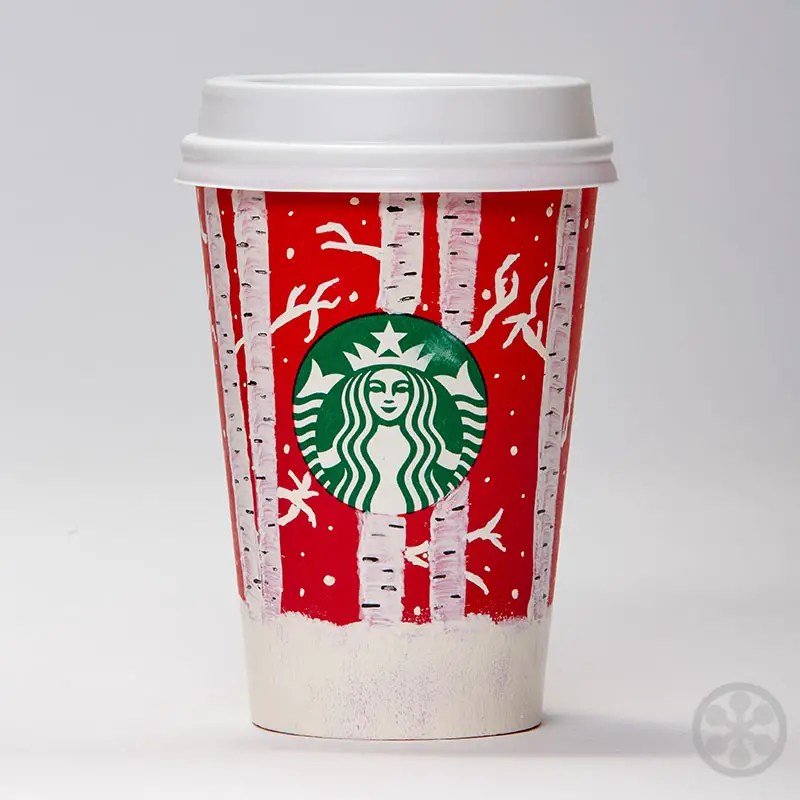 Chloe, a nurse aide in a Chicago suburb, created a wintery design using acrylic paint. “It is such a beautiful sight seeing the bare trees covered up in snow,” she said. “The first thing that comes to mind is home.” 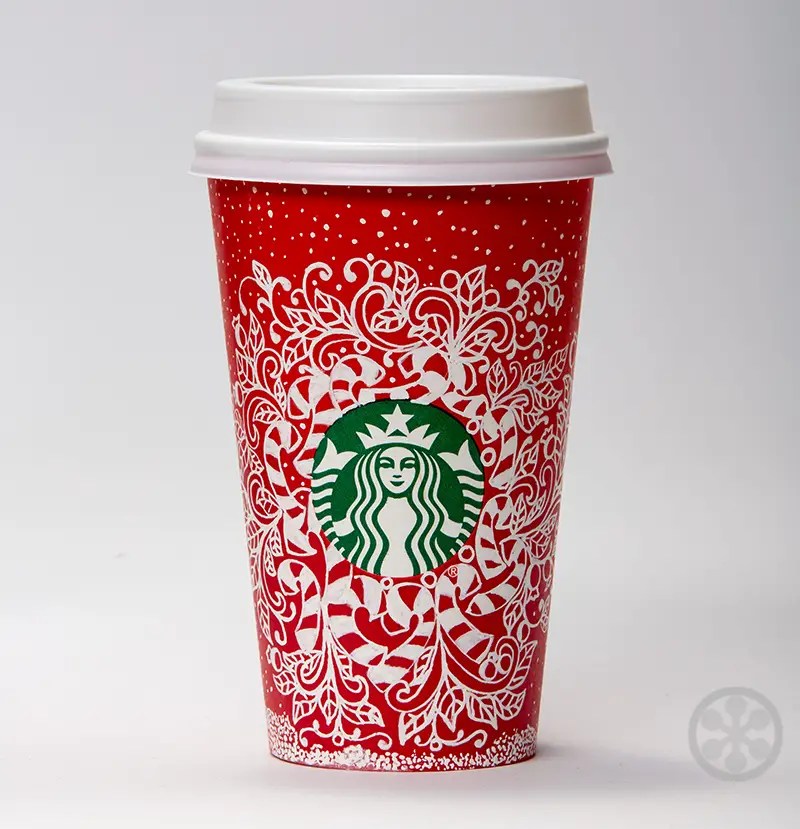 Jennifer, a professional artist who has also illustrated several coloring books, wanted to create a holiday design that people could identify with. “My goal was to merge the whimsical candy cane elements with the botanical patterns in a cohesive, symmetrical design that would not only capture the spirit of the holiday season but also work with the red ombré, which is why I chose white ink. It was a great deal of fun to make, and I thank Starbucks for giving artists such a lovely canvas to work with.” When Anz moved from her home in the Philippines to Dubai, she made a hobby of drawing on Starbucks cups, collecting more than 75 cup creations. When her husband brought home a red cup last holiday, she was excited to try her first holiday design, with hanging ornaments and feathers reminiscent of dreamcatchers. “I love the Christmas season so I was really inspired. To me, the color red symbolizes the celebration of love and life,” she said. 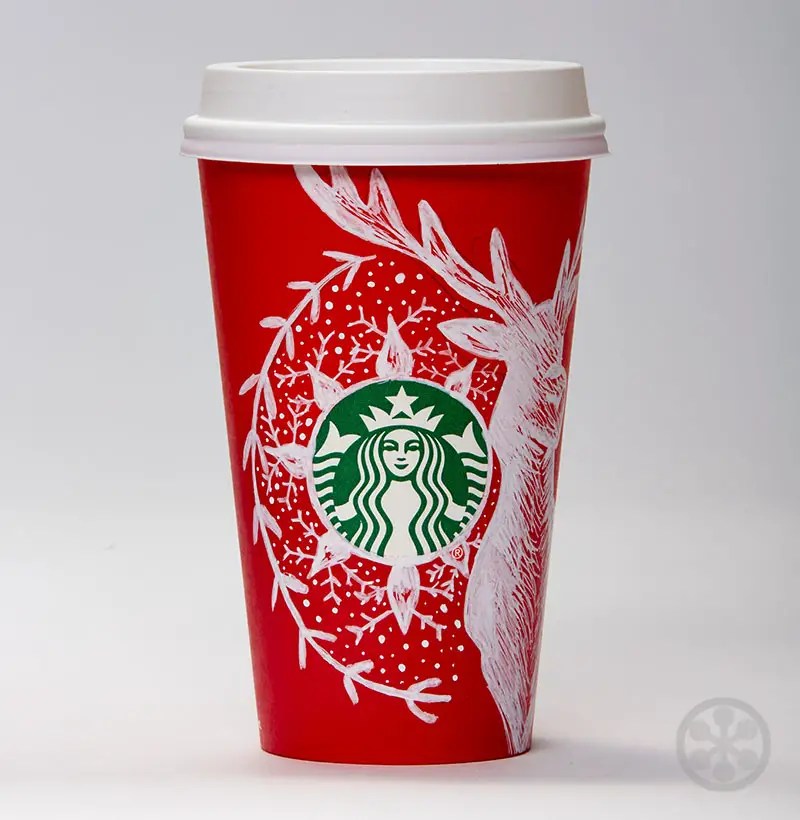 Samantha is a hair stylist who was on maternity leave when she created her wintery design, which features the silhouette of a deer against an evergreen wreath and snowflakes. When Starbucks put out a call for cup designs, “My daughter was three weeks old and I was doodling during nap times,” she said. Now she’s looking forward to creating new holiday traditions with her daughter, who will soon be celebrating her first birthday. Santa’s sleigh and reindeer take flight above a snow-covered village in this design from Anna, who lives in the heart of Toronto – one of Canada’s most vibrant cities known for its rich cultural heritage. Born in the Soviet Union, Anna was trained in petrykivka, an ancient Ukrainian decorative folk art, which influenced her design’s intricate line work and details. A student of landscape architecture, Christina created a design that features the festive poinsettia plant. She is currently working on a public art installation in Bonn, Germany, and said, “Part of the job of a landscape architect is to connect people to the environment by creating a sense of place. I decided to evoke the Christmas spirit by creating a design with a plant that is symbolic of the season.” Erica, a recent paralegal graduate from Markham, Canada, was helping her sister recover from knee surgery when she decorated her holiday cup with playful swirls. “My sister was stuck on the couch for a month, so we spent a lot of time coloring together,” she said. “When I wanted to change it up, I switched to doodling on Starbucks cups!” For Alisa, inspiration for her design came while drinking a gingerbread latte. “The holiday mood made me try to draw on the Starbucks cup for the first time,” she said. Her design features snowflakes and reindeer patterned after a cozy sweater. 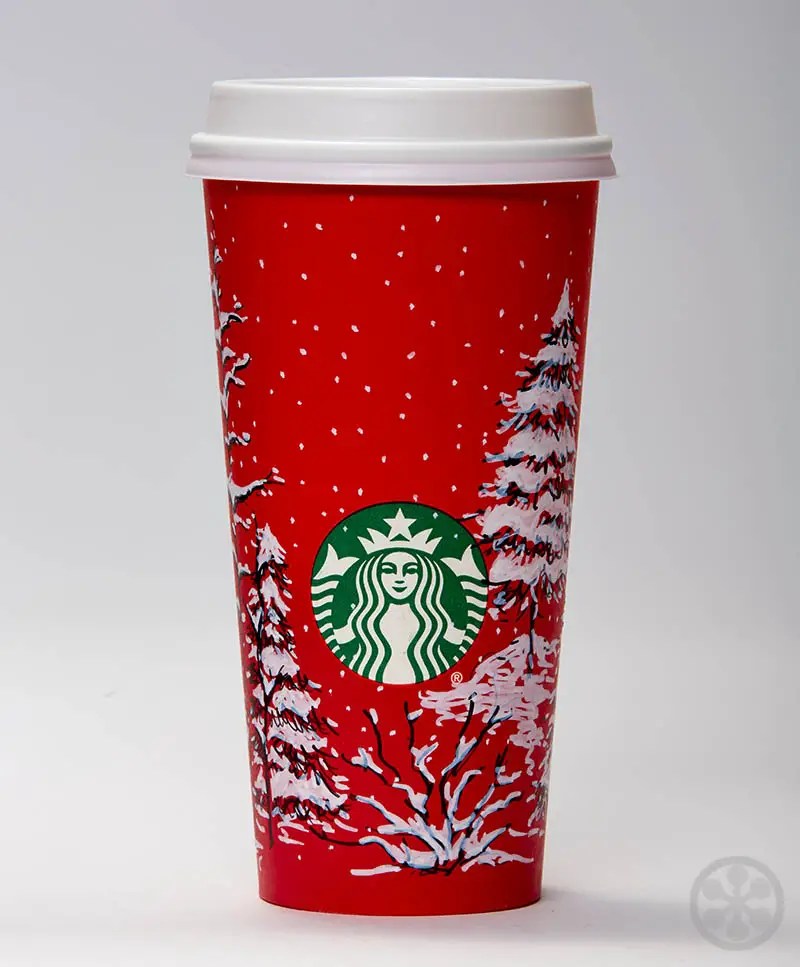 A December hike along a favorite mountain trail was the inspiration for Bronwyn, a college student from Moscow, Idaho. “Everything was still and snow-covered. The contrast was beautiful – it was almost like a black and white photo all around us,” she said. “The simplicity of the image transferred easily into a wintery design.” For her whimsical design, Eun Joo depicted Santa’s sleigh on a starry night. Tiny snowmen adorn overlapping circles. “There are many people – like different patterns of overlapping circles – but everyone can have happy memories with a cup of coffee at Starbucks.” 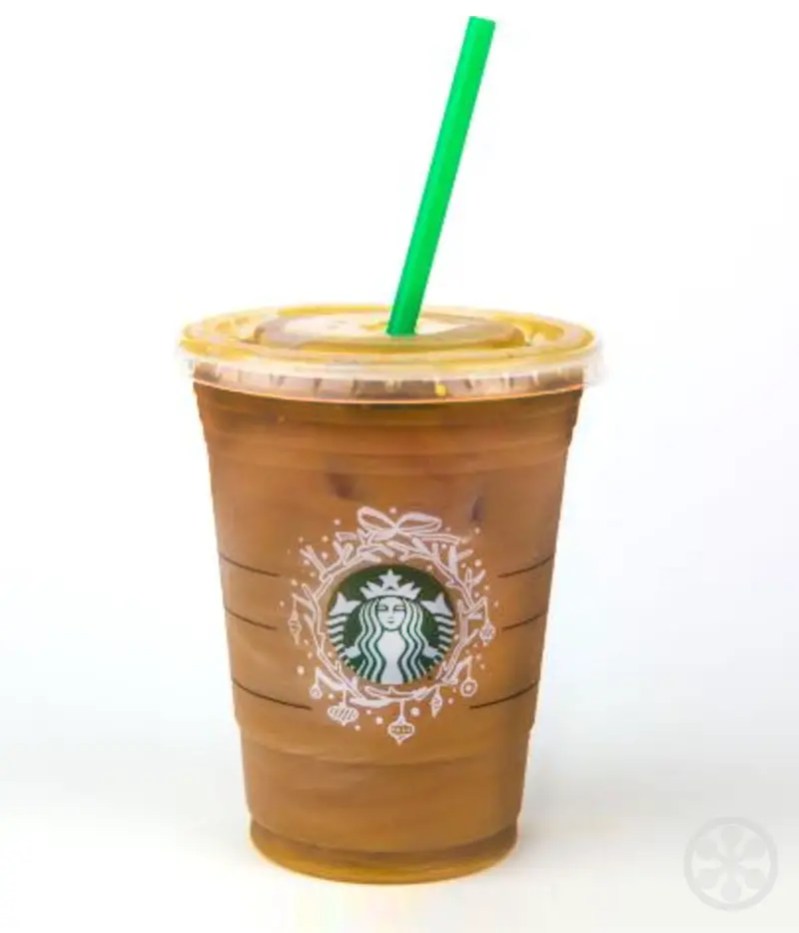 Tracy, a professional artist from Los Angeles, crafted a wreath that encircled the Starbucks logo – a design on Starbucks cold beverage cups. “I love the nature and the woods, so I decided to illustrate a wooden wreath with ornaments of various shapes and patterns. Topping it all off is some snow, a bow and a dash of holiday spirit.”

The Starbucks Creative team printed each design posted to social channels and noticed the themes that began to emerge – graphic, inspirational, intricate, seasonal, typographic. No customer names were included, just a photo of the cup that was submitted.

“We loved how the red cups with white designs naturally created a collection,” Blevins said. “They hang together as one idea, but each expression is unique.”

Next, the Starbucks team asked a small group of customers to mail in their cup so that it could be evaluated for potential production. The team worked to honor the artists and the integrity of their artwork, making as few changes as possible to the original.

In the end, the 13 customer designs shown here were selected from six countries to represent the collective spirit of the holidays around the world. Their designs are showcased on the holiday cups served in the more than 25,000 Starbucks stores in 75 countries.

“People will be walking around the street in Shanghai, New York and London carrying these cups,” Blevins said. “We love that this year our customers’ artistry can play a part in brightening someone’s day.”

Starbucks has even turned three of the designs (Candy Canes, Pine Trees and Christmas Lights) into 12 oz double wall tumblers:

The above tumblers are available here and in select stores.

all info and images courtesy of Starbucks