` The Stanley Kubrick Retrospective - If It's Hip, It's Here
Skip to content

It is the first time that The Paris Museum of Film (La Cinémathèque française) hosts a travelling exhibition not initiated by their own teams but by those of another institution. This Stanley Kubrick exhibition owes its existence to the Deutsches Filmmuseum in Frankfurt and to Hans-Peter Reichmann, its curator, who designed it in 2004 in close collaboration with Christiane Kubrick, Jan Harlan and The Stanley Kubrick Archive in London.

Since 2004, the exhibition has opened with success in several cities: Berlin, Zurich, Gand, Rome and Melbourne, before coming to the Cinémathèque.

The Original Movie Posters from his most famous films:

The exhibition, film after film, includes the unfinished projects:
Napoleon

that Kubrick hoped to direct and his project for a film on the death camps, Aryan Papers. These materials allowed Cinémathèque to get backstage and better understand the narrative and technical intentions of the director who was a demigod of world cinema, a secret and fascinating figure. The exhibition will be installed on two floors of the Frank Gehry building, on the 5th and 7th stories, owing to the bulk of the materials exhibited, including large-scale models and interactive digital installations.

The Stanley Kubrick Archive contains numerous and precious working documents : scenarios, correspondences, research documents, photos of film shoots, costumes and accessories (among them the survival-kit from Dr. Strangelove, the Starchild and the ape‘s costume from 2001: A Space Odyssey, costumes from Barry Lyndon…), as well as a very detailed documentation of his unfinished and cult projects, such as Napoleon (1968-1973).

These documents are presented exclusively in this exhibition, which also retraces the first artistic steps of Stanley Kubrick, who started his career as a photographer for the American magazine Look in the 1940s. Dozens of prints, mostly unpublished, from the collection of the Library of Congress (Washington D.C.), prove that the very young Kubrick already had a solid grasp of visual composition. The exhibition offers us the opportunity to go backstage and to understand the technical inventions of Kubrick (the slit-scan, for example). The special effects are explained by large-scale models and interactive digital installations.

Definitely worth seeing is the on-line exhibition, the best of web creation on Kubrick, a contest in partnership with Dailymotion. 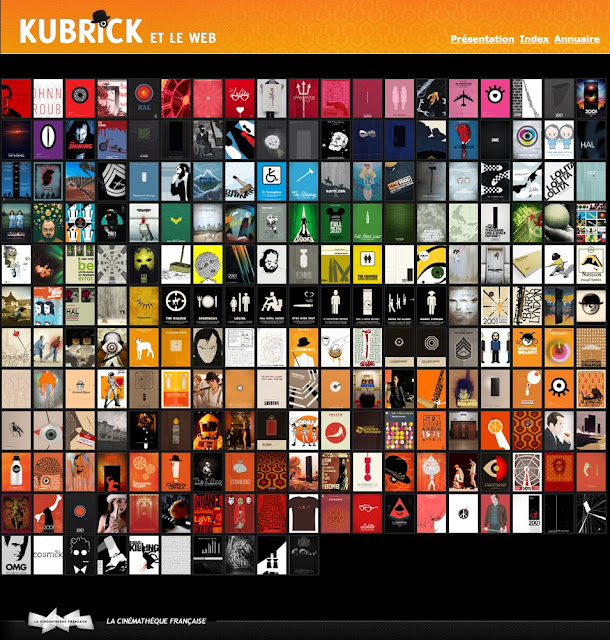 Up until the 30th of April, you can participate in the contest sponsored by Daily Motion. Submit your own video or see the ones submitted by others here. The origin of the exhibition by Christiane Kubrick, Jan Harlan & Hans-Peter Reichmann. In the preface of the official catalogue, Christiane Kubrick, Jan Harlan and Hans-Peter Reichmann evoke the origin of this exhibition and go back over the figure of Stanley Kubrick:

During the 43 years we were married, the question of what to do with the personal effects in case of one of us should die never arose. (…) The suggestion by the Deutsches Filmmuseum to mount an exhibition which after Frankfurt and Berlin might travel the world presented itself as an incentive to deal with the task and to honour Stanley at the same time. The aim was to chose items which best represent Stanley’s involvement in all aspects of film-making. (…) — Christiane Kubrick

An actress of German origin, Christiane Kubrick married Stanley Kubrick in 1958. She played the German singer in Paths of Glory and produced paintings and sculptures for the sets of the films A Clockwork Orange and Eyes Wide Shut

The whole idea seemed strange at first. Exhibiting Stanley’s equipment, his plans, notes, photos? It did not feel right and would have been unthinkable during his lifetime, yet on careful reflection and discussion with Christiane Kubrick it became quite clear that while his privacy had to be guarded, his professional output was for all to be seen to celebrate the life of a great film maker. (…)Overcoming obstacles was part of his personality and one of the passions that spiced up his life. I am reminded of Jean Cocteau’s famous remark : ”I didn’t know that it was impossible, that’s why I did it.” That was Stanley’s approach too. So we undertook the impossible. We had a vast amount of material in many places in England and America, countless boxes full of notes, photographs, correspondence, scripts, reams of draft pages, plans, a huge library and a truckload full of equipment. All this would be meaningless in an exhibition unless we succeeded in making it relevant and could provoke enthusiasm in a visitor to watch Stanley’s films – again or for the first time. –Jan Harlan

Assistant director in 1957 on the film Paths of Glory, Jan Harlan became the brother-in-law of Stanley Kubrick who married his sister Christiane Harlan and, from Barry Lyndon in 1975, was the executive producer of all his films. In 2001, he directed the documentary Stanley Kubrick, A Life in Pictures.

There are many superlatives and they are readily repeated in attempts to explain Stanley Kubrick and his oeuvre. Only few of his contemporaries actually met him. Those who did meet him were often pushed to their limits, yet remain full of admiration. (…) Stanley Kubrick was selftaught, read widely, researched, and questioned everything. He developed plans only to abandon and redefine them according to his own unique and incomparable vision. As a director and producer, Kubrick created worlds of images that to this very day hold an unbroken fascination and continue to inspire and provoke their audience. (…)The exhibition stands out for the interplay of materials from the Estate – props, written documents, photographs, technical film equipment – and walk-through installations that recapture the atmosphere and themes of the individual films. The interdisciplinary exhibition draws attention to Kubrick’s visionary adaptations of influences from the fine arts, design, and architecture and enables us to experience the film cosmos of one of the great artists of the 20th century in all three dimensions.–Hans-Peter Reichmann