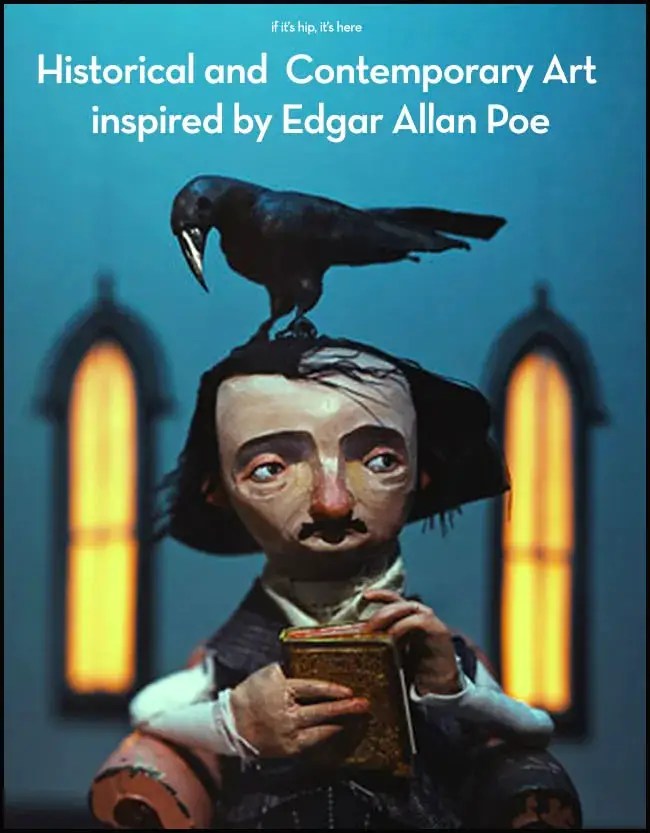 Few historic figures conjure up the macabre as well as the 19th century author, poet and literary critic Edgar Allan Poe. A heavy drinker, Poe was preoccupied with death, decomposition and premature burial (possibly because of his wife’s early demise) and is best known for his Gothic style of fiction. Tim Burton and Edward Gorey are a just two of the well known personalities whose work is inspired by The Master of the Macabre.

Plenty of Poe for Halloween

His poem “The Raven” and his tale of insanity, “The Tell Tale Heart,” are two of his best known darkly romantic works and have inspired many to create art, films, housewares, jewelry and other writings as an homage to Poe.

And Poe’s The Raven narrated by Christopher Walken:

Artists and designers have been inspired by Poe’s work for centuries. To start with, here’s a look some early renderings for publications of The Raven by famous historic artists Édouard Manet, Gustave Dore and John Tenniel:

The following works are from Deviant Art and many can be purchased as prints. A Tribute to Poe by Telegrafixs: A caricature mini bust of Poe by Mark Newman: The following Poe-inspired art, housewares and jewelry can be found on Etsy, click on the links above each image for purchasing information: Red Velvet Cake
Another form of art is baking and check out this stunning Edgar Allan Poe cake by Sprinkle Bakes: get the recipe here • Interactive Poem of The Raven

“Poetry is the rhythmical creation of beauty in words.” – Edgar Allan Poe

The Wyeth’s Penchant for Pumpkin Painting and Halloween

Well, Tickle My Ass With A Turkey Feather! Take A Look At These.