This is an unusual and modern take on the swimming pool that might appeal to those who favor a distinctly different, clean contemporary look. The pool accompanies a wood-clad three bedroom cottage in the Village of Sagaponak in the town of Southampton and is made of Dupont Corian in a pale pink color.

Getting this modern pale pink Corian swimming pool approved in the Village of Sagaponak was no easy feat. Designed to accompany the Surf Shack by Roger Ferris + Partners, and fabricated by Sterling Surfaces, the Corian Strawberry Ice pool was initially met with some controversy. Here’s the story. The owners, The Gallipoli family, have a special interest in British art and decided to go with the unexpected choice of pale pink to suit their creative flair. They ended up with Corian Strawberry Ice, guaranteed by Dupont not to yellow when exposed to the elements.

The Corian-clad in-ground/above-ground pool measures 15′ wide x 77′ long and was installed using the principles upon which Corian Exterior Cladding is based, allowing for seasonal movements of the material as it is exposed to the extremes of hot and cold. The Corian was fabricated in 10′ long panels, with seven across the long sides and shorter panels at the corners. The ends each have on long panel and two shorter panels. 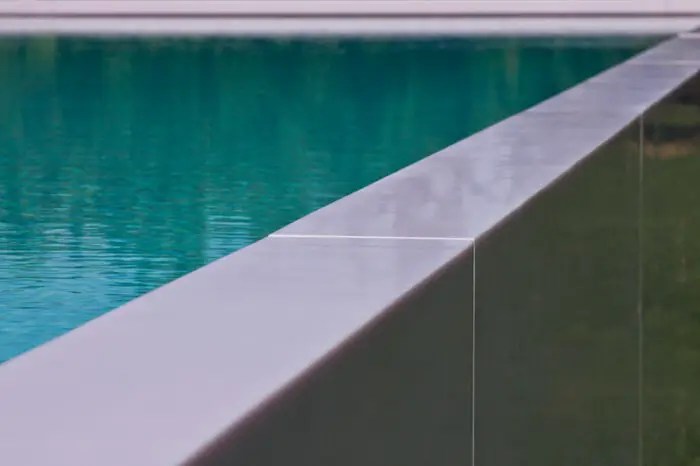 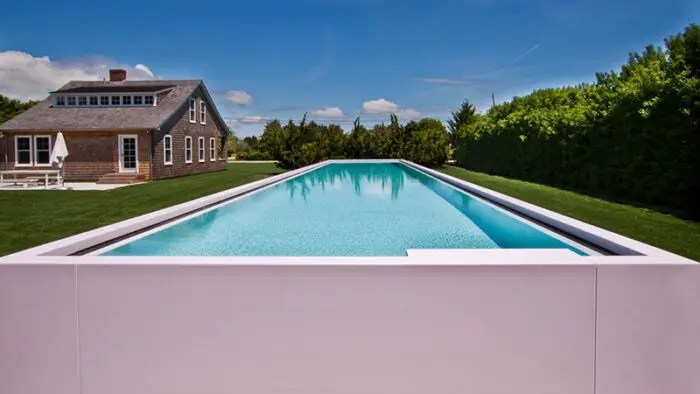 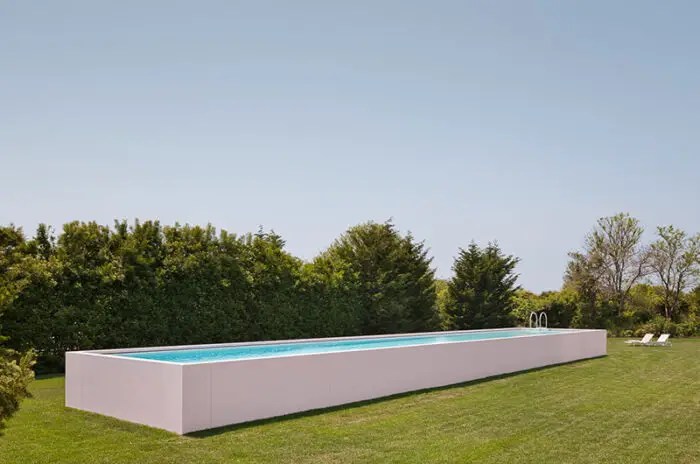 As you might suspect, not all the neighbors were in love with this modern pool. It wasn’t easy to get the town board to agree to this particular pool design, their biggest objection being the color. The owner originally wanted to go with a black (Deep Nocturne by Corian) and although rated for exterior use, the dark colors do fade and become hot to the touch. So, black was out. Members of the board said they preferred a very light gray, but owner Artist Frank Gallipoli thought it would then look like cement.

They suggested several different whites such as Corian Glacier White, Designer White and Abalone, all of which he felt appeared as bright white under the sun and were too garish. The board members even suggested mixing two colors, but the idea of mottling was soon ruled out.

Gallipoli and architects Roger Ferris + Partners talked about what other colors were in the environment. They started focusing on the color of the pool and the sky as it reflects in it, the color of the dawn and the sunset and the pinkish hue that it has in combination with the turquoise of the water. That is how they arrived at this very subtle pink color. When you look at the small sample chip of the Corian Strawberry Ice in indoor lighting, it can be startling, but outside in the sunlight in the landscape, it is actually quite subtle and becomes closer to beige. Eventually, the board approved the strawberry ice color with the expectation for the landscaping plan that a 5’ osmanthus hedge will screen the end of the pool to serve as a view shed as per plan submitted. 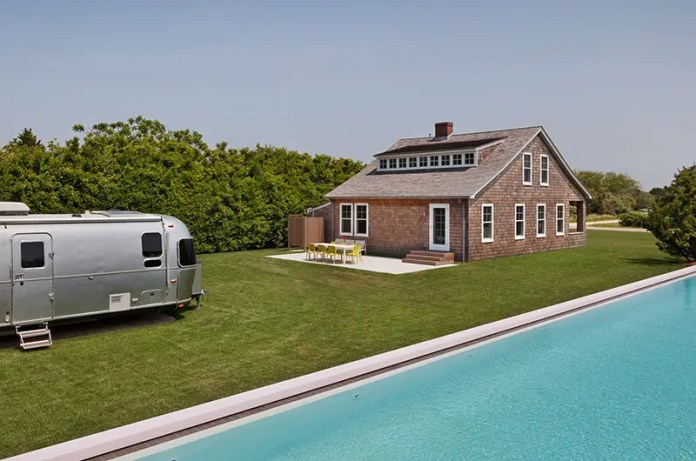 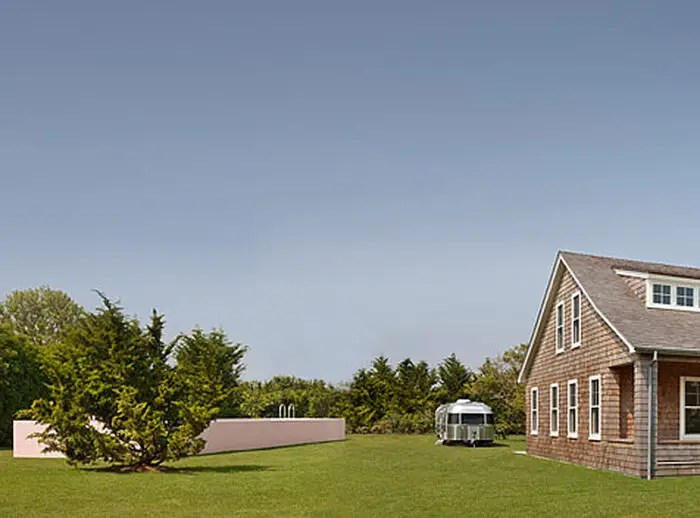 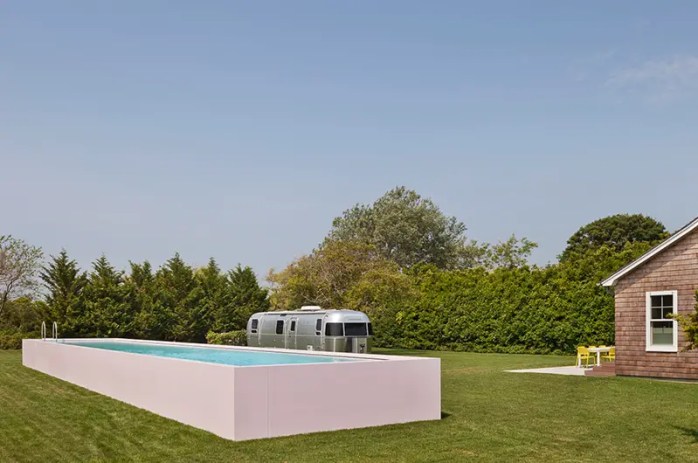 The pool accompanies the “Surf Shack” by architects Roger Ferris + Partners. The design is a refined interpretation of the suburban American Dream: modest scale home, swimming pool and travel trailer. The three bedroom cottage was renovated to introduce more natural light into a more open floor plan. The trailer, an Airstream PanAmerica, occasionally serves as pool house for the Corian clad swimming pool. 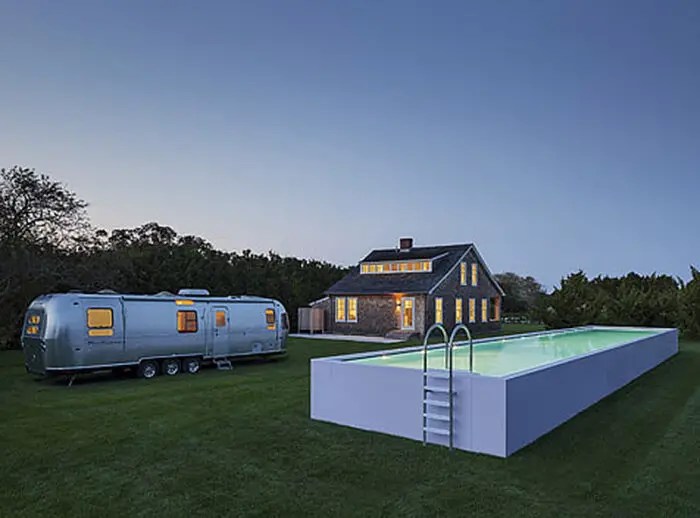 Information regarding the town board discussion and approval of the pool and landscape proposal can be found here, in the minutes from the Sagaponack Village meeting.

Javier Senosiain House Among The Trees