` Paintings That Are Truly Gems. Realistic Crystals and Minerals Rendered In Oils. - If It's Hip, It's Here
Skip to content 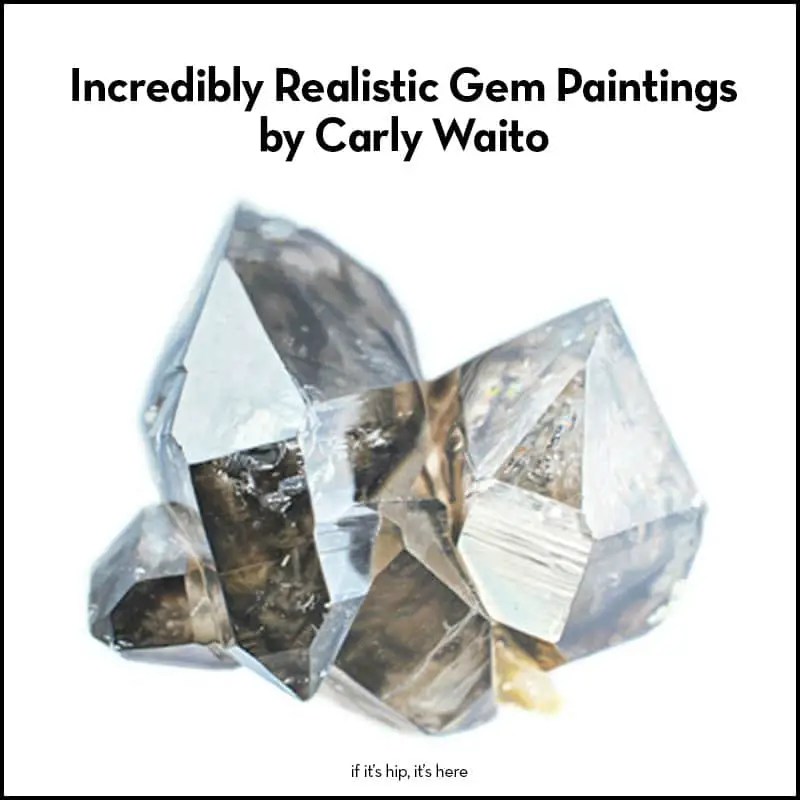 These amazingly realistic oil paintings on masonite by Carly Waito are really precious. Literally and figuratively. The small scale works range in size from 4.5″ x 6″ to 11″ x 12′ and impressively capture the way crystals and rocks reflect and refract light. Given the healing properties of many stones and minerals, these works have appeal in both their craft and subject matter. I’d like to own several of them and hang them together. As you can see, they sell quickly (almost every single one shown in this post is sold). The following three images represent some of her latest work and as you can see, she is exploring black backgrounds for some of her newer pieces. The following text is courtesy of Narwhal Art Projects:
In these works, diminutive specimens of semi-precious gems and minerals are rendered in meticulous detail, exposing the beauty and logic of their structural minutiae. Yet, beyond simple imitation, Carly Waito’s reproductions imbue further worth to objects that are naturally perfect: where each specimen inherently exudes an aura, Waito has both reiterated and enhanced it. The result is a reverent homage to nature’s marvel, the faculty of humankind and the unconditional value of their synergy.

Through curating minerals, photographing them in macroscopic detail and rendering them in oil paints, Waito employs a layered process highlighting the ties between mimesis and levels of value. From the seemingly limitless depths of Smoky Quartz to the chromatic, reflective facets of Sphalerite, the geometry and beauty of each painted specimen speaks to the incredible complexities of nature’s design as well as Waito’s own facility. Each painting expands the infinitesimal traits of the artist’s tiny subjects, rendering them as detailed maps of an otherwise invisible geological universe.

About the artist:
Toronto-based artist Carly Waito was born in Manitouwadge in 1981 and raised in Thunder Bay. A graduate of the Ontario College of Art and Design, Waito co-founded the ceramic art and design studio coe&waito with Alissa Coe in 2005. The partnership is known for its elegant products and sculptural installations inspired by the natural world. As a painter, Waito has continued to pursue this inspiration, with a focus towards geology, geometry and ideas of wonder and curiosity. She has participated in a number of exhibitions, including Little Crowns (Dec 2009) , The Dazzle (Oct 2010) and Specimens (2011) at Narwhal Projects, and Plus 1(2011) at Sloan Fine Art in New York.