` Large Letšeng Diamond and Other Record Rocks
Skip to content 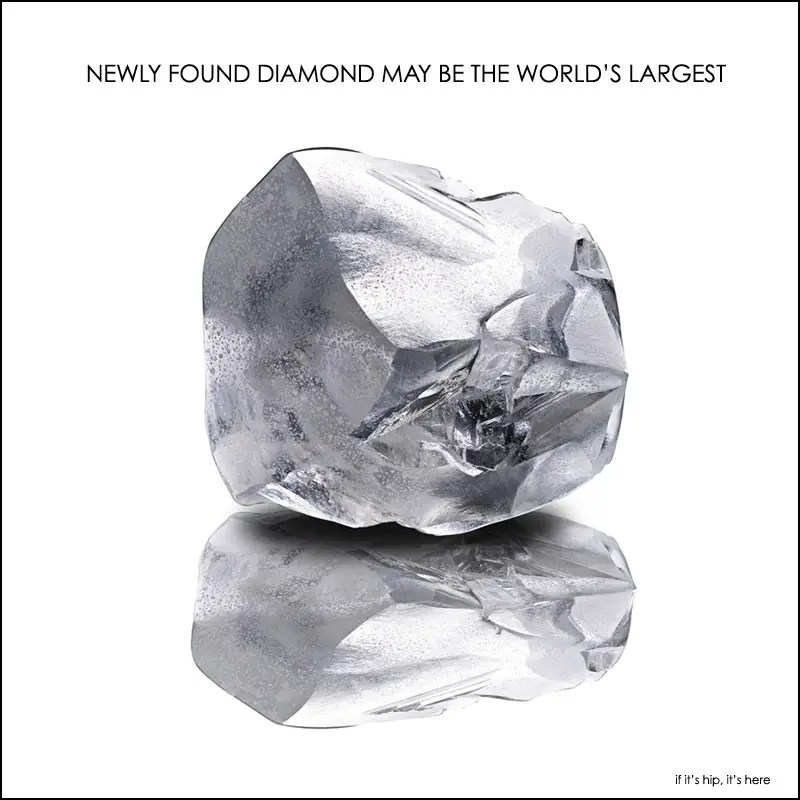 A huge gem stone which could become the largest polished round diamond in history was recently unearthed at the Letšeng diamond mine in Lesotho just this past September 8th, 2008.

Gem Diamonds and the Lesotho Government, a 30 percent partner in the mine, announced Sunday the recovery of a 478-carat type II D color diamond (shown above) which they say has the potential to yield one of the largest flawless D-color round polished diamonds in history. “Preliminary examination of this remarkable diamond indicates that it will yield a record breaking polished stone of the very best color and clarity,” said Clifford Elphick, CEO and chairman of Gem Diamonds.

The diamond was recovered on Monday September 8, and sent to Antwerp for analysis where it was determined to be a type II D color diamond – the highest color grading available for a white diamond, Gem Diamonds explained. above: A model inspects the world’s 20th largest rough diamond, which was discovered at Gem Diamond’s Letsing Mine in Lesotho.

The massive stone is the 20th largest rough diamond ever found, weighs 478 carats and is said to be of outstanding clarity. It was recovered earlier this week at the Letseng Mine, in Lesotho, a small kingdom in South Africa.

The clarity and round shape of the new gem mean it could be worth considerably more than the previous find of the Letsing “Promise” diamond valued at 12.4 million a few months ago from the same mine. In its polished state, this latest find could fetch tens of millions of pounds. The rough stone above is estimated to be capable of producing a 150 carat polished gem stone, dwarfing the Koh-i-Noor diamond which is part of the Crown Jewels.

A spokesman for Gem Diamonds, who own the mine, added that initial examination suggested that the white diamond, which has yet to be named and valued, has a completely flawless center. That means, once polished the uncut stone could become the world’s largest ever diamond. above: The new diamond could be larger than the Koh-i-noor diamond, seen in the Queen mother’s crown (shown above, circled in red).

The Crown of Queen Elizabeth the Queen Mother, with the Koh-i-noor diamond, sits in the Tower of London with the Crown Jewels. It was given to Queen Victoria by 1o year-old Duleep Singh, last Emperor of the Sikhs in 1855.

The mine, which was owned by famous diamond company De Beers for many years, has already produced three of the world’s biggest diamonds including the 603 carat Lesotho Promise, the 493 carat Leteng Legacy and the 601 carat Lesotho Brown.

Clifford Elphick, chief executive officer of Gem Diamonds, said ‘Preliminary examination of this remarkable diamond indicates that it will yield a record breaking polished stone of the very best colour and clarity.’

The find is still dwarfed by the Cullinan Diamond which was discovered in 1905: above: At 3,106 carats, the Cullinan Diamond was the largest gem-quality rough diamond ever found but the biggest polished stone produced from it, the Great Star of Africa – 530 carats – is a teardrop shape. above: The Koh-i-noor is a round cut but at 105 carats it is smaller than the potential size of the new find. It originated in India but was seized by Britain as a spoil of war in 1849. It supposedly brings good luck to female owners and misfortune or death to any male who wears or owns it.

A bit about the Letšeng Mine in Lesotho: above: aerial view of the Letšeng pit

Letšeng Diamonds Proprietary Limited is owned 70% by Gem Diamonds and 30% by the Government of the Kingdom of Lesotho. Operated by De Beers between 1977 and 1982, Letšeng reopened operations in 2004 and was acquired by Gem Diamonds in 2006.

The average elevation at the mine is 3,100m above mean sea level, making it the highest diamond mine in the world. The mine consists of two adjacent primary near vertical kimberlite pipes the Satellite and Main, with confirmed vertical depths of 495m and 655m respectively. The average grade of these resources is 1.72 carats per hundred tons (cpht). With approximately 14% of all stones being larger than 10.8 carats (ct), the production profile is more akin to that of an alluvial than kimberlite mine.

The average price per carat achieved at Letšeng in 2007 was US$1 997 per ct, relative to an industry average of US$81 per ct. As such Letšeng is a remarkable mine producing some of the world’s remarkable diamonds including large gem quality diamonds that sell for the highest per carat price of any kimberlite mine. above: drilling at night at the Letšeng’ mine

Historically 81% of Letšeng’s revenue is from large diamonds (+10.8 ct) and 90% of the diamonds recovered are gem quality with a significant proportion graded as D colour. above: the Promise Diamond, 603 carats, also mined from Letšeng. above: the Letšeng Legacy Diamond, 493 carats

Letšeng Diamonds markets all its diamonds through a tender process in Antwerp. The Lesotho Promise sold by Gem Diamonds in Antwerp for US $12.4 million and the Letšeng Legacy for US $10.4 million.

The mine’s current processing capacity is 2.6 million tonnes per annum (tpa), which will double to 5.28 million tpa by mid 2008 after commissioning of the second treatment plant is completed and commissioned. This will make Letšeng the 7th largest kimberlite mine in the world by throughput. The present life of mine is optimized at 33 years.

Limited Ed. Blackball Sweatshirts Tell The Story of The Negro Leagues Through AR