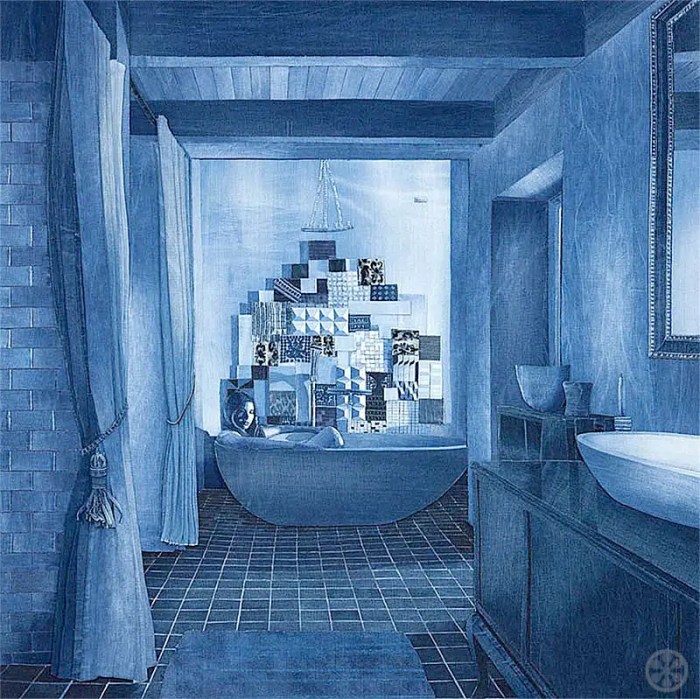 ‘Behind Closed Doors’ and ‘My Beautiful Launderette,’ both presently on exhibit at London’s Catto gallery, feature new amazing denim artwork by Ian Berry. 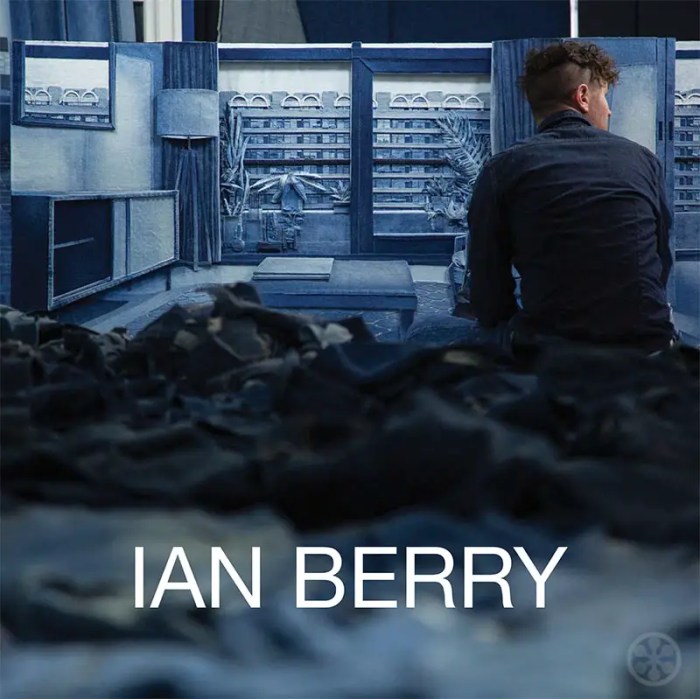 Having shared with you a large post on his Denimu work in 2013, I was elated to these newer pieces from the London-based artist expressed in a two-part show. Ian makes narrative art out of denim. That’s right… he chops up jeans, jean jackets and other denim apparel and uses the all-American textile as a medium. No paint, no bleach, no dyes, just scenes awash in the natural blues of the denim.

the following text is courtesy of Catto Gallery
The inspiration for Ian Berry’s eagerly awaited new show (more accurately, two shows) began in the Museo Reina Sofia in Madrid in 2014. Ian was in Spain to discuss a commission, one of many overseas trips in a whirlwind year for the in- demand artist. He admits it was a disorienting time. The hectic schedule, the constant travel, the days away from his family – all of it nagged away at him.

“I found myself thinking more and more about what home means. At times I didn’t even know where home was,’ he recalls.

Then he walked into that gallery in Madrid, which was hosting a show by photographer Chris Killip. The first image he saw was of Huddersfield, the town of his birth. The next was of the small town of Easington, where his grandma’s family originated. The coincidence jarred him. Immediately, the idea for a series of new works coalesced. He would explore what home means, and how urban dislocation is re-shaping its definition for huge numbers of people.

Two years on, the twin exhibitions – Behind Closed Doors and My Beautiful Launderette – are complete. Without doubt, they mark a huge step forward for the artist. In his sparkling career to date, Ian has wowed art lovers and collectors with his foundational idea: making collages purely from denim. No paint, no bleach. It’s instantly appealing. Add to this the ingenuity of his technique and you get sell-out shows, glowing reviews, global TV interviews and glamorous commissions (Georgio Armani, Ayrton Senna’s family, Debbie Harry and others).

The truth is, it’s easy to get carried away with the novelty of the medium and forget that, first and foremost, Ian Berry is an artist with something to say. Well, in this two-part show he is speaking loud and clear.

Behind Closed Doors comprises a series of interiors. Opulent interiors, mostly. And in nearly all of them there is a woman alone.

But what’s really going on here? What is the truth behind the glossy exterior? “There’s always this gap between perception and reality,” says Ian. “People might look at my life and think it’s very glamorous. I might look at others and think the same. But the truth is always more complicated. In my new works I was thinking about these ideas.”

While Behind Closed Doors expresses Ian’s interest in life inside the home, he also has lots to say about home on a more societal level. Which is why he produced a companion exhibition: My Beautiful Launderette.

As a newly arrived resident of London (he has been based in Sweden for many years and last year was based in Amsterdam), Ian is well aware of the crippling cost of living in the city. And he’s observed the effect this is having on communities.

“Creative people and artists have helped to make London what it is. People want to come here because of that energy. Now, it’s going away,” he says. While searching around for an emblem of disappearing community, Ian settled on the launderette. “They’ve been places where people could meet and talk and get to know each other. Now, they are disappearing. I wanted to capture that. They can also be beautiful in their own way, which helps.”

Ian’s portraits of launderettes in Bow, Poplar, Holloway Road and Ladbroke Grove are beautifully wistful. They also reveal the best of his astonishing technique. Ian admits he relishes the challenge of emulating metallic surfaces in denim. Here, he excels himself.

It’s not surprising. Ian has been working in his favoured medium for over a decade. He knows what he’s doing. He started after a clear-out session at his childhood home yielded a big pile of unwanted jeans. The rich palette of the denim, and the many memories associated with it, gave Ian the idea that has brought him global renown. His work has sold across Europe, America, the Middle East and Australasia, and has been featured in art and fashion magazines from Style to GQ. He was also named a top 30 under 30 to watch in the world by Art Business News.

Ian’s new works will certainly expand his fanbase. Their technical brilliance and emotional complexity mark a new phase in his career. Wherever your home is, it should certainly have one.

all images and information courtesy of Catto Gallery