` The Netflix Binge Scale - How We Watch
Skip to content Ever wonder how long it takes most Netflix Binge watchers to power through a series? According to Netflix, it’s based on the type of programming. The Netflix Binge Scale ranks the global viewing of more than 100 serialized TV series and reports which shows are likely to be the kind that make you stay up all night versus the kind you save for one or two episodes a night. 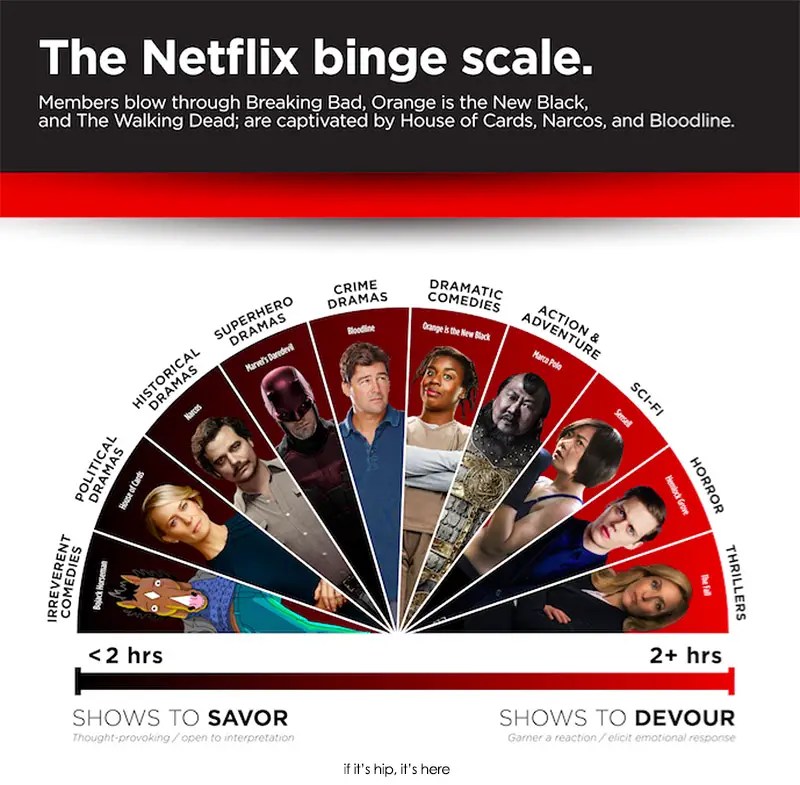 The following text is courtesy of Netflix:
Netflix members around the world are making their own rules when it comes to watching TV. Instead of one episode per week, Netflix members choose to binge watch their way through a series – that is, on average, finishing an entire season in one week. Though binge watching is clearly the new normal, not all series are enjoyed the same way. Today Netflix unveiled The Binge Scale, revealing which shows we devour and which we savor. 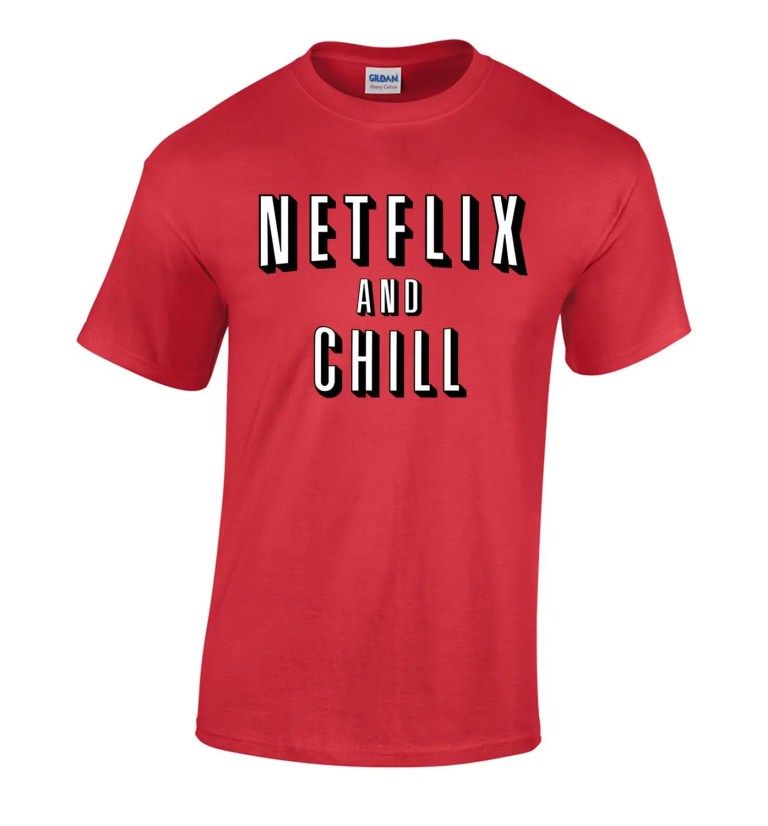 Netflix examined global viewing* of more than 100 serialized TV series across more than 190 countries and found when members are focused on finishing a series, they watch a little over two hours a day to complete a season. When organizing series in relation to this benchmark, interesting patterns emerge, ranging from high energy narratives that are devoured to thought-provoking dramas that are savored. 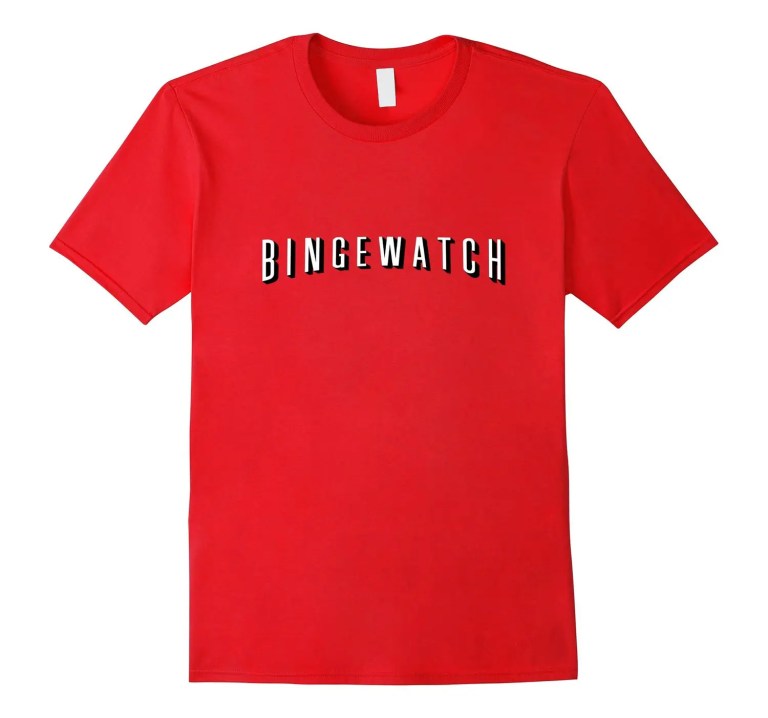 Series like Sense8, Orphan Black** and The 100 grab you, assault your senses, and as The Binge Scale shows, make it hard to pull away. The classic elements of horror and thrillers go straight for the gut, pushing the placement of series like The Walking Dead, American Horror Story and The Fall towards the devour end of the scale. Likewise, comedies with a dramatic bent, like Orange is the New Black, Nurse Jackie and Grace and Frankie, seem to tickle our fancy and make it easy to say ‘just one more.’ Buy the above t-shirt here

It’s no surprise that complex narratives, like that of House of Cards and Bloodline, are indulged at an unhurried pace. Nor that viewers take care to appreciate the details of dramas set in bygone eras, like Peaky Blinders and Mad Men. Maybe less obvious are irreverent comedies like BoJack Horseman, Love and Unbreakable Kimmy Schmidt. But the societal commentary that powers their densely layered comedy paired with characters that are as flawed as they are entertaining allow them to be savored.

“As The Binge Scale indicates, the viewing experience of a series can range from the emotional to the thought-provoking,” said Cindy Holland, Vice President of Original Content at Netflix. “Netflix helps you to find a series to binge no matter your mood or occasion, and the freedom to watch that series at your own pace – whether that’s to appreciate the drama of Bloodline or power through Orange is the New Black.” 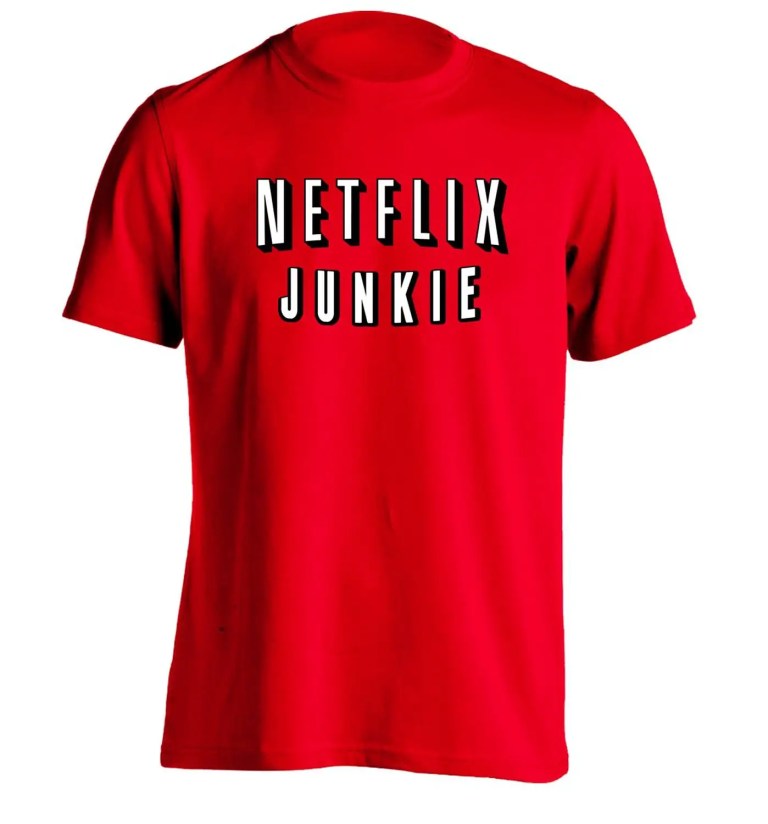 Buy the above t-shirt here

THE NETFLIX BINGE SCALE** (Based on global viewing data)

Netflix Series listed below range from the Savored to the Devoured

Netflix analyzed more than 100 serialized TV series across more than 190 countries between October 2015 and May 2016. The research examined member completion of the first season for all series. Data was only included for accounts that fully completed the season. Completion rates were organized into days and hours. The global median days to complete the first season of these series was five days. The median hours per session for completers overall was two hours and ten minutes. Series viewed less than two hours per day were identified as ‘savored.’ Series viewed more than two hours per day were identified as ‘devoured.’ Series were not restricted by launch dates, runtime or number of episodes. Where a series falls on The Netflix Binge Scale has no relation to viewership.

** Not all series are available in all countries Buy anyone a Netflix gift card and send it via e-mail here.