Boym Partners has a different idea of a souvenir than you may be used to. No romantic recollections reproduced in miniature, no glorification of heroes on porcelain plates, no picturesque renditions captured in snow globes.

Instead they have created tabletop architectural miniatures of tragic sites, blueprints of buildings that were the subject of murders, bomb threats and other disasters, and miniature half-built skyscrapers in bright colors interrupted during their construction due to lack of funding. They even have a birdhouse fashioned after the Unabomber’s cabin hideaway in Montana.

Since 1998, Boym has chosen to honor buildings as symbols of political or human catastrophe rather than for brilliant form or important client. Hence, their best-known work, Buildings Of Disaster. Made from a specially bonded metal, each architectural miniature cast monument is made in a limited edition of 500.

Initially, it was Boym Partners’ innovative three year project, Souvenirs of the End of the Century, a mail-order catalog that went out in November 1988, that spawned their ‘ Buildings Of Disaster’, which is the best selling independent design project of all time.

“The end of a century has always been a special moment in human history. While we no longer expect the world to come to an end, we all still share a particular mood of introspection, a desire to look back and to draw comparisons, and a sense of closure and faint hope. Above all, the end of the century is about memory. We think that souvenirs are important cultural objects which can store and communicate memories, emotions and desires. Buildings of Disaster are miniature replicas of famous structures where some tragic or terrible events happened to take place. Some of these buildings may have been prized architectural landmarks, others, non-descript, anonymous structures. But disaster changes everything. The images of burning or exploded buildings make a different, populist history of architecture, one based on emotional involvement rather than on scholarly appreciation. In our media-saturated time, the world disasters stand as people’s measure of history, and the sites of tragic events often become involuntary tourist destinations.” 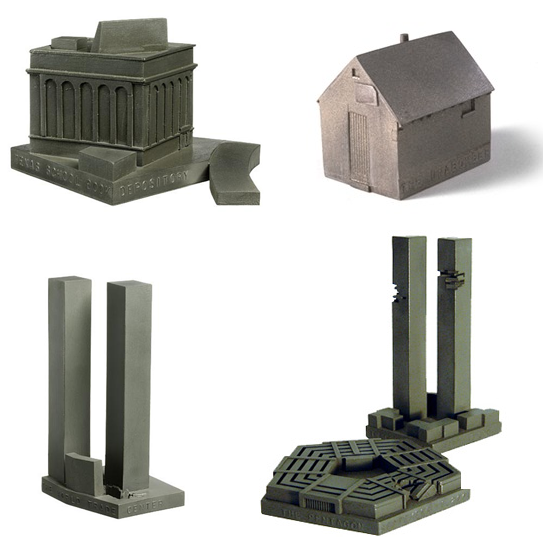 above: Once they’ve sold out, they’re gone (as is the case with The Twin Towers Monument, The Texas School Book Depository, the site of President Kennedy’s assassination, November 1963) and the Unabomber’s cabin. But they continue to add to the collection.

Linda Hale writes:
The Buildings of Disaster project emerged as a response to the end of the tumultuous 20th century. Boym drew inspiration from media repetition, as did Andy Warhol in his own disaster series. Boym acknowledges “one common precedent” but says, “My buildings are commentary not so much on disaster, but on the reflection on the disaster. They have a different sensibility.” The list began with Chernobyl, the Texas School Book Depository, the Watergate complex, and the Unabomber Cabin. A miniature Oklahoma City federal building, its center cratered by a bomb blast, was the first to freeze-frame the impact of terrorism. After Sept. 11, Boym sculpted the Twin Towers scarred by attack, but standing, and a gouged Pentagon. Proceeds went to relief funds. (source)

At present, on their site, the series consists of these models: 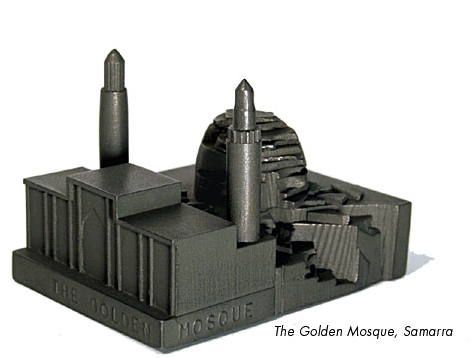 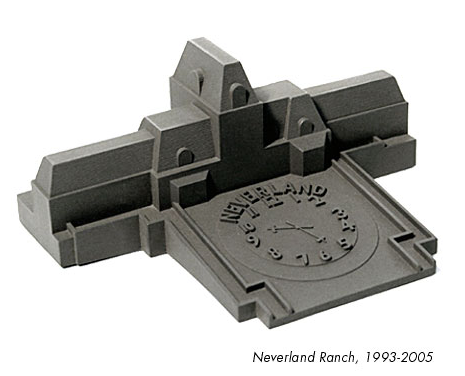 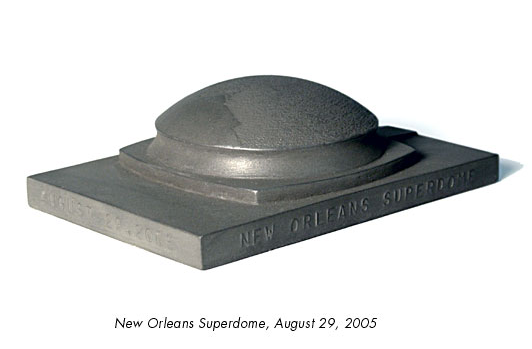 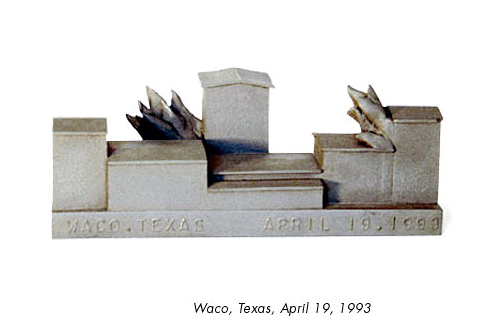 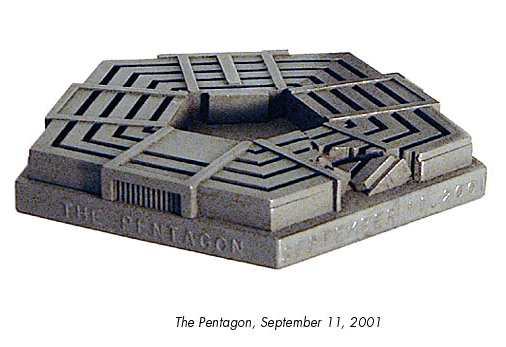 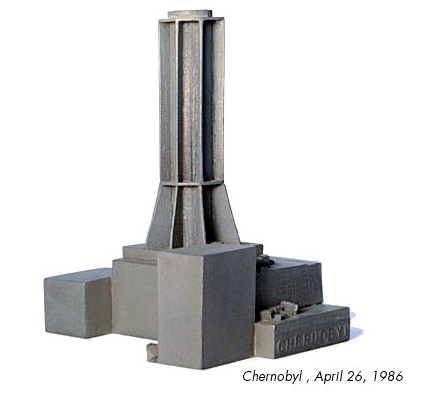 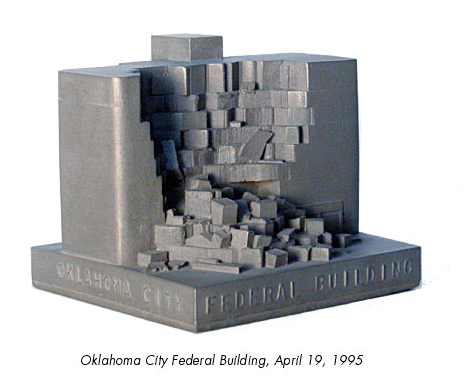 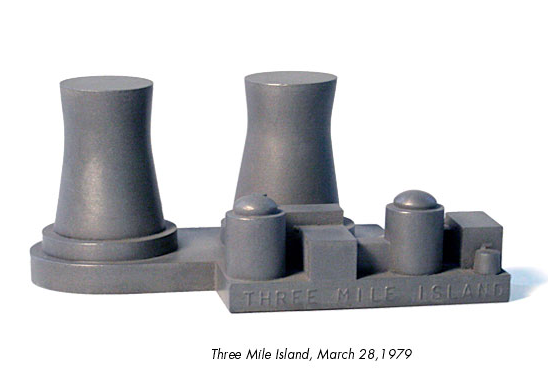 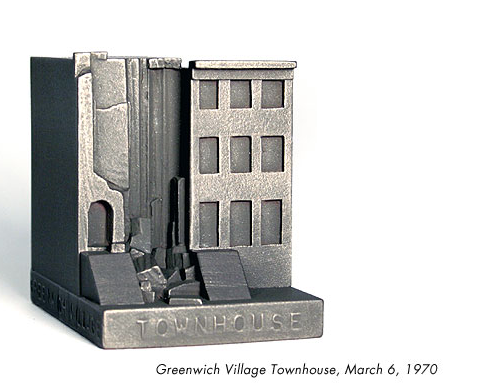 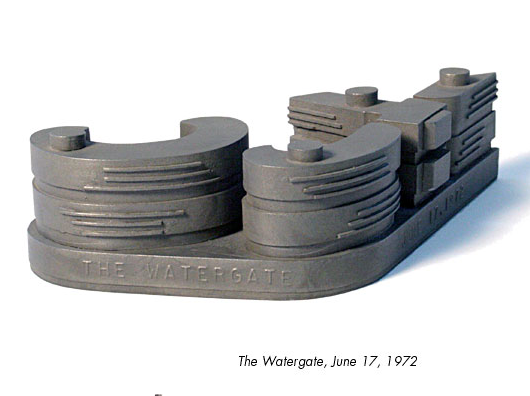 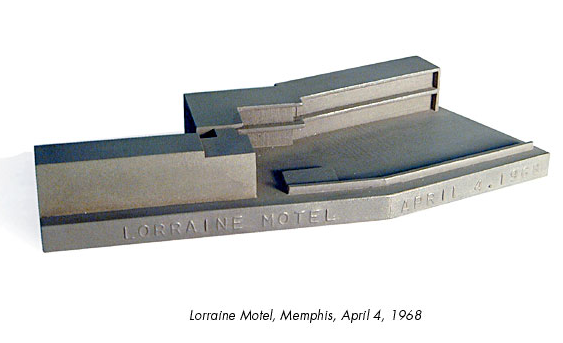 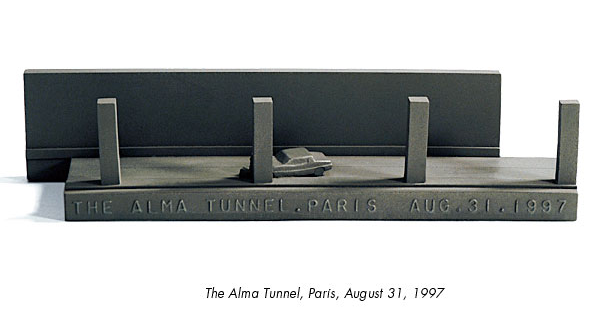 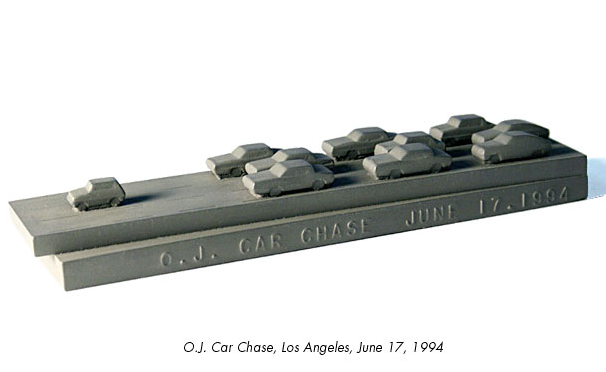 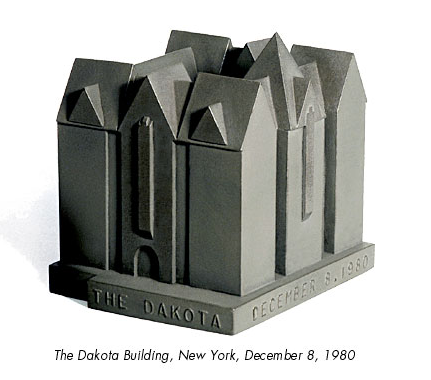 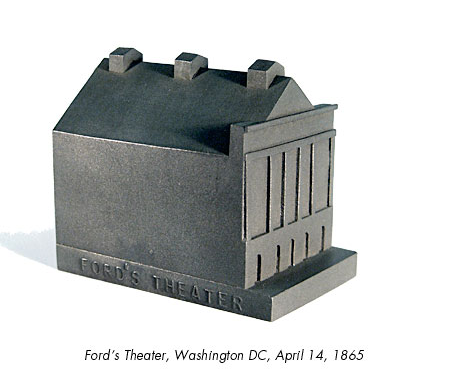 At Design Miami 2007, Constantin and Laurene Boym showed a limited edition 24k gold plated version of their Buildings of Disaster in honor of the 10th Anniversary of the infamous architectural model collection: 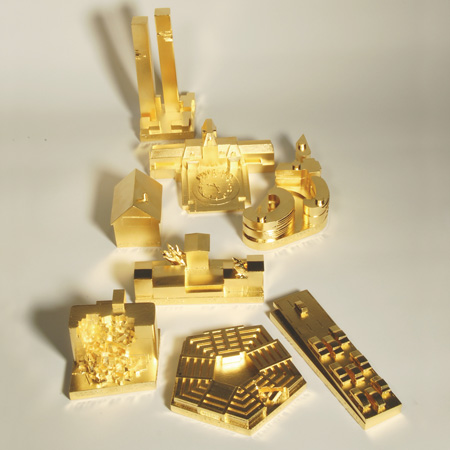 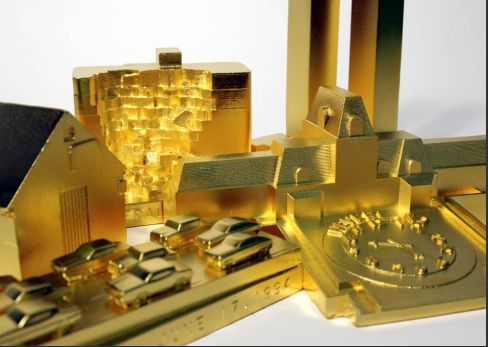 You can purchase some of these Buildings of Disaster (including other editions not shown here) online at Velocity Art and Design or at Unica home or at New York Gifts or Minima and finally, but most costly, at MOSS online.

But that’s not the only way Boym is immortalizing disasters. It may not be as glamorous as Princess Diana’s tragic accident or as perversely fascinating as Michael Jackson’s Neverland Ranch debacle, but today’s economic situation is certainly a tragedy that affects all. Boym has created a new series of souvenirs, Recession Souvenirs to be exact, that capture the building of skyscrapers interrupted due to lack of funds, one of the first causualties of the worldwide recession.

Recession Souvenirs: Interrupted Skyscrapers
The collection includes Burj al Alam in Dubai, The Russia Tower in Moscow (planned to be the largest tower in Europe), the Busan Lotte Tower in Korea (designed as the world’s tallest hotel), Herzog & de Meuron’s Condo Tower in New York at 56 Leonard, and the controversial Cheesegrater Tower intended for the heart of London. 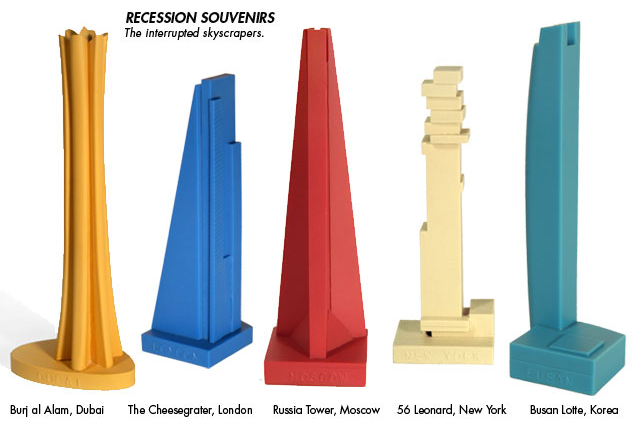 Price is $95.00 USD each, limited number. Available here until sold out.

Bitter Blueprints:
Yet another way Boym has chosen to capture historical calamaties is by printing up digitally offset blueprints of venues such as The Bundy Residence (the scene of the murder of OJ Simpson’s ex-wife Nicole) and the Oklahoma City Building. These can be purchased framed in black metal or if you buy four, in a special collector’s portfolio.

8.5″ x 11″ digitally offset blueprints signed and produced in a limited number of 500 each. 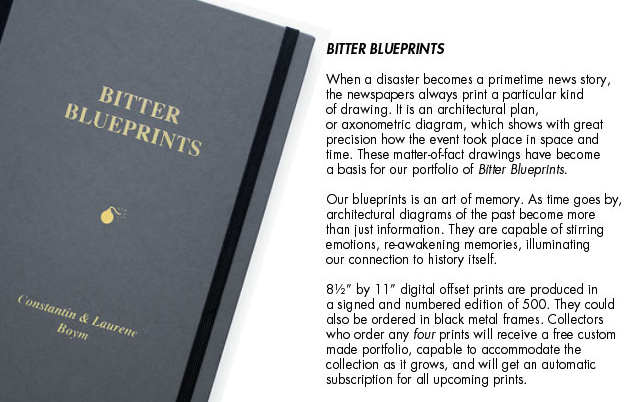 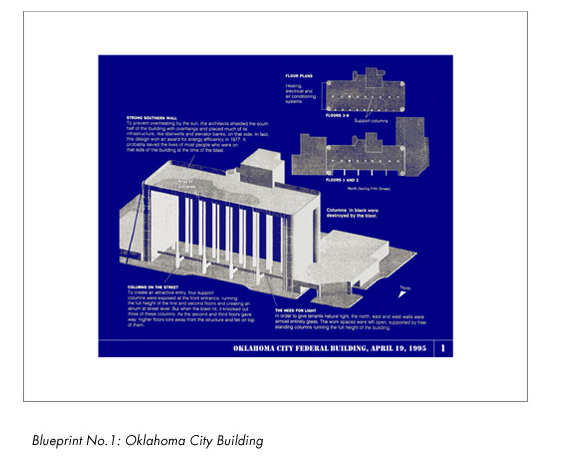 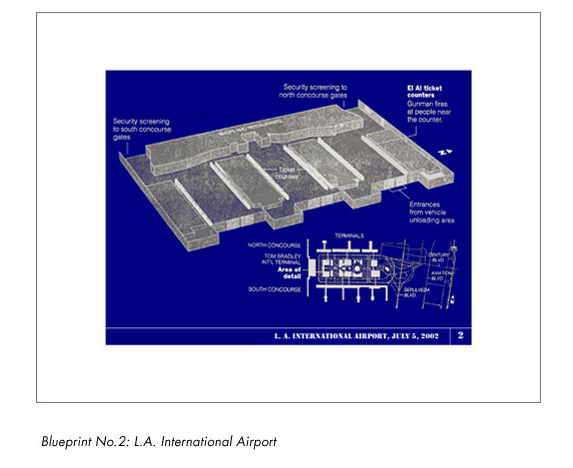 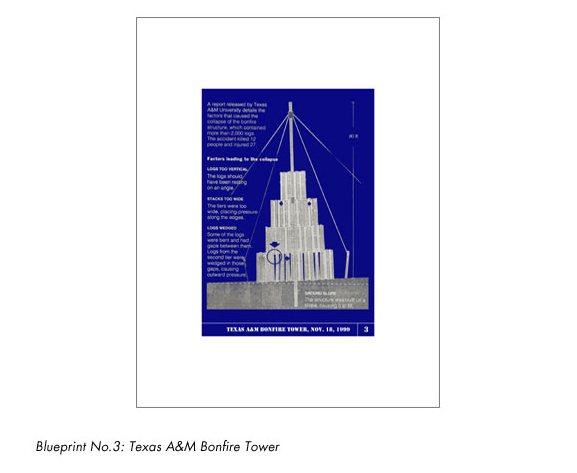 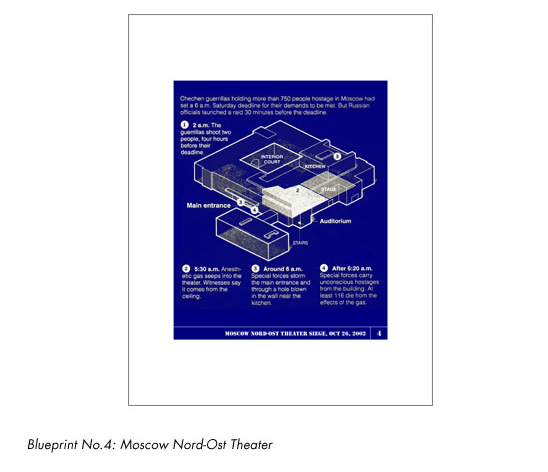 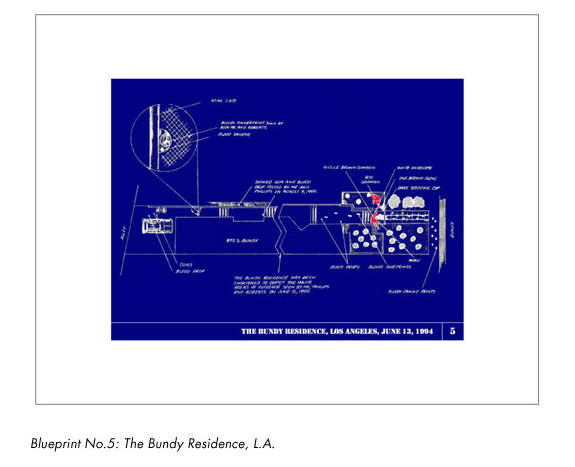 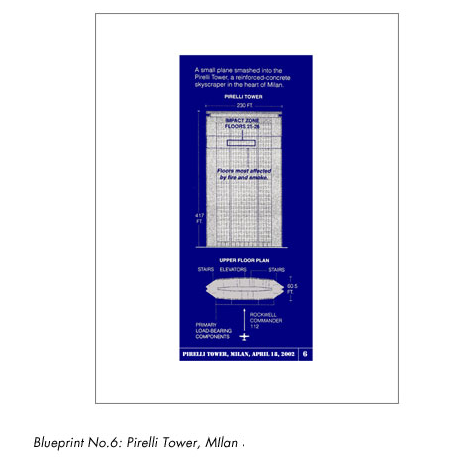 They’ve even recently introduced a limited edition birdhouse based on the Unabomber’s Lincoln, Montana shack. 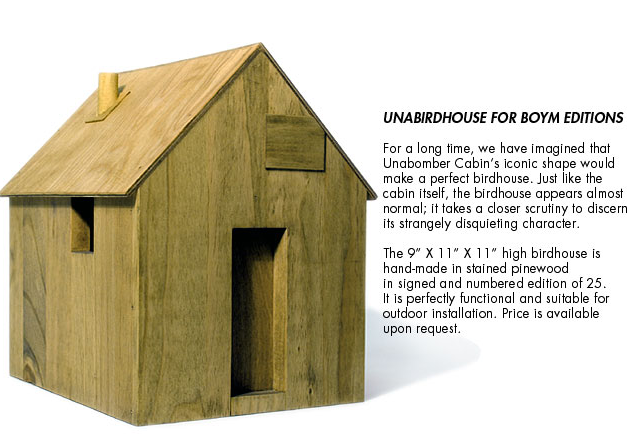 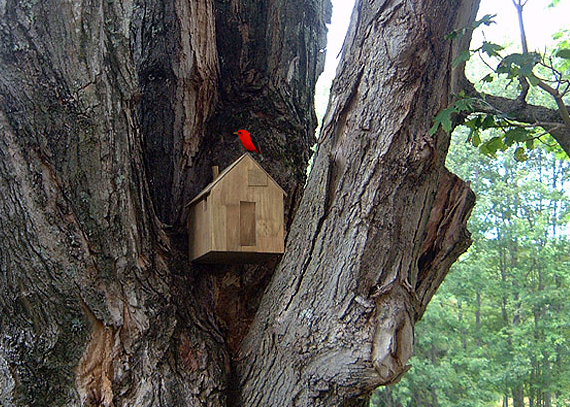 The real thing is a macabre memento of its own:

above: the actual unabomber’s cabin after being removed from Montana (photo by Richard Barnes) Check out a video of the real cabin here. 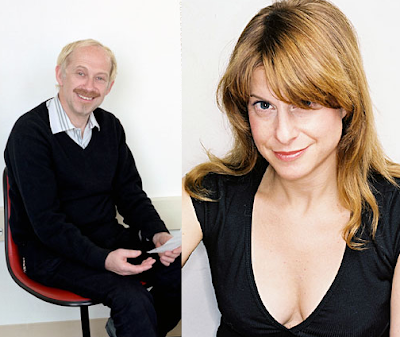 About Boym Partners, Inc:
Boym Partners Inc was founded in New York in 1986 by Russian born Constantin Boym. In 1989 he earned a Masters degree in Design from Domus University in Milan, and then became a registered U.S. architect in 1988. Laurene Leon Boym has been a part of Boym Partners since 1995. Prior to that she was a Designer in Residence at The Cooper Hewitt in 1993. In 1992 she founded AWID (Association of Women Industrial Designers) and she presently teaches in the MFA program at the School of Visual Arts in New York City.

In 2008, the Boym Partners were Finalists in the Product Design Category, National Design Awards, Cooper Hewitt National Design Museum. Their work is published, sold and exhibited worldwide and is in many museum collections, including the Museum of Modern Art, NYC. 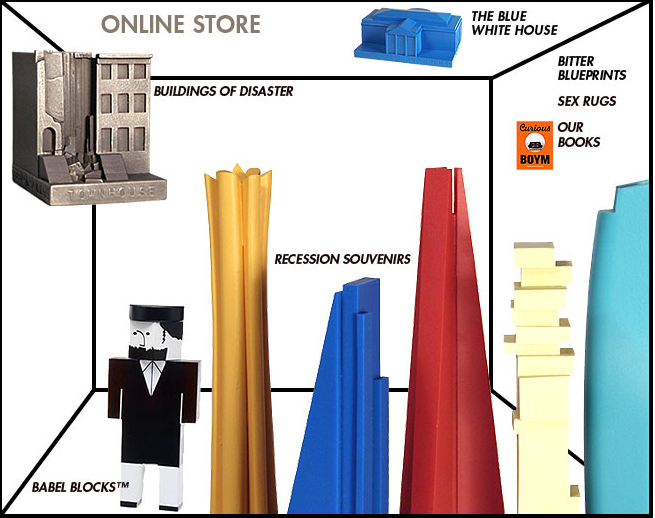 See all their work and shop their online store here.