you are here: if it's hip, it's here » art » art and fashion collaboration » Miracle-Gro Millinery: Tulips and Pansies, The Headdress Affair

Now in its seventh year, Village Care of New York’s annual “Tulips and Pansies: The Headdress Affair” is not your average benefit fashion show – pair New York’s top florists with the city’s most creative fashion designers, and the end result? Floral headdresses akin to wearable rooftop gardens, that are so outrageous and over-the-top they could be their own float in the annual Rose Parade in Pasadena, Calif. 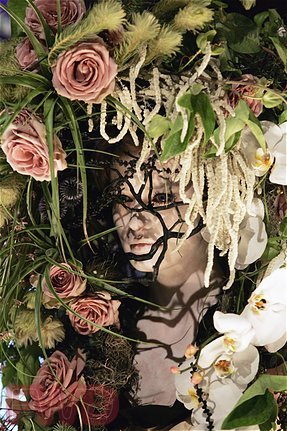 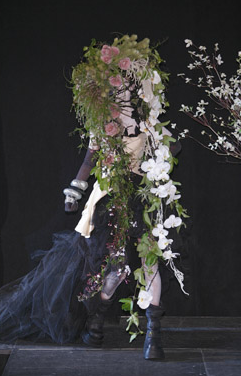 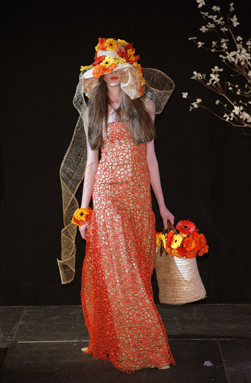 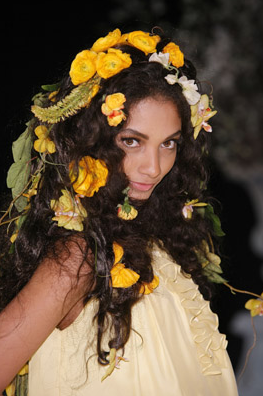 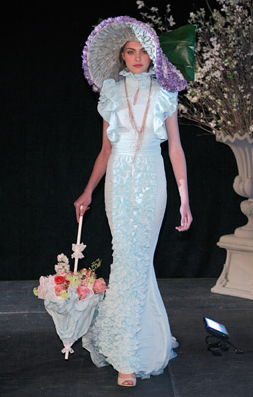 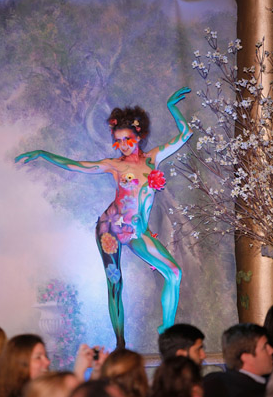 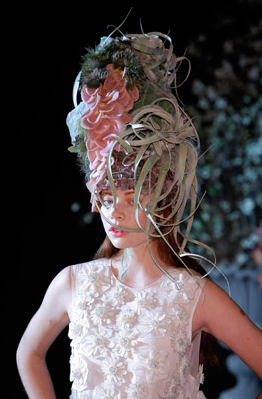 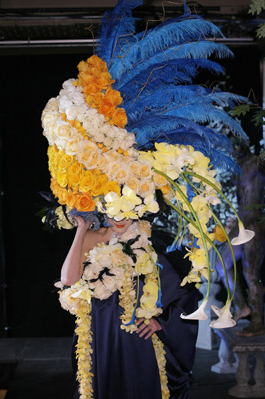 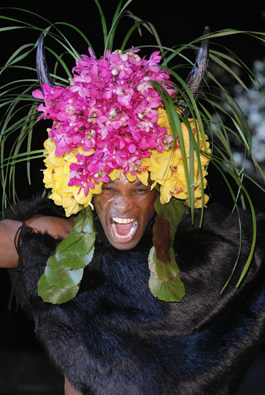 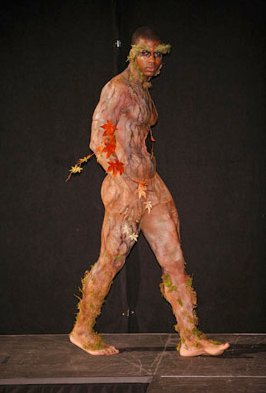 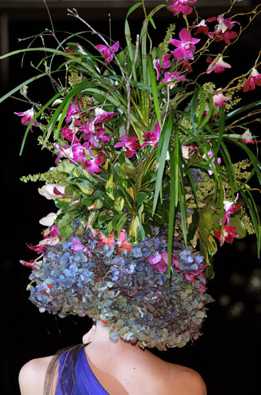 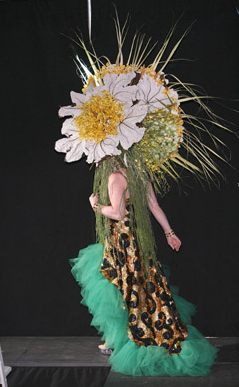 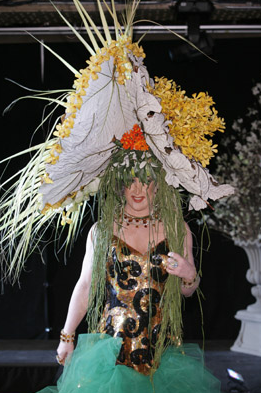 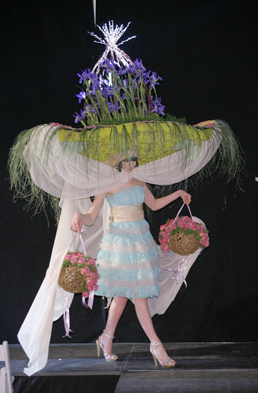 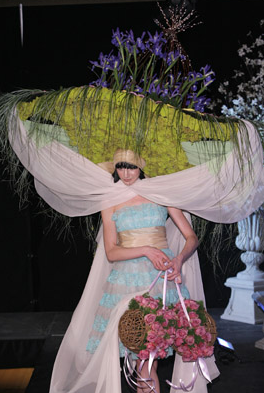 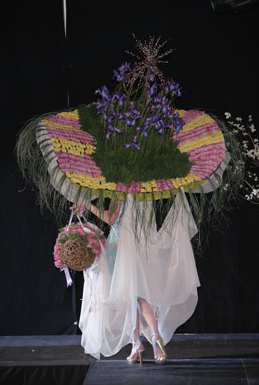 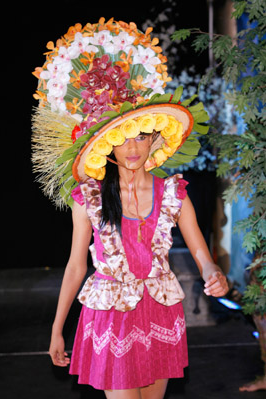 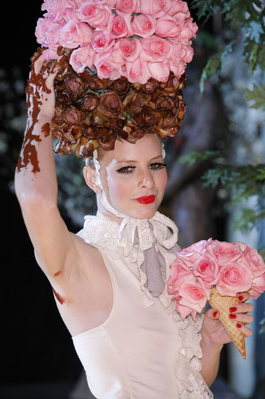 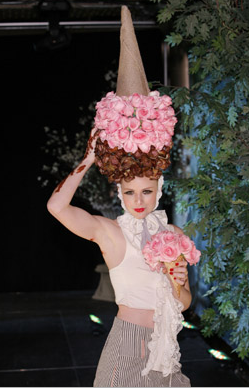 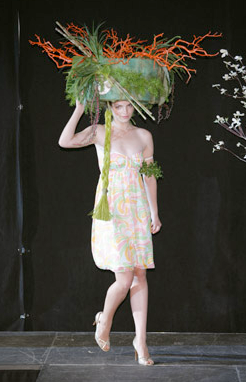 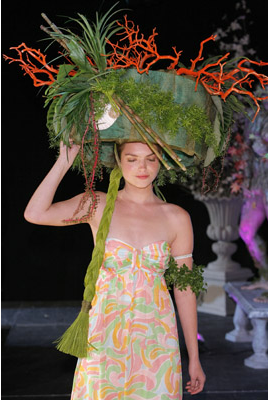 The show, held on Thursday, May 15, raised funds to support Village Care’s medical and other support programs for the 1500 AIDS and HIV patients they serve on a daily basis. With Heatherette’s Richie Rich and Traver Rains and model and actress Lydia Hearst as the event’s co-chairs and James Aguiar of “Full Frontal Fashion” as the exuberant emcee, fashion met floral in 18 elaborately constructed headdresses by designers such as Betsey Johnson, Alvin Valley, Catherine Malandrino, Yigal Azrouel, Shoshanna, Lela Rose, Magda Berliner, Cynthia Steffe, Jordi Scott, b. michael, Alexis Bittar and others. 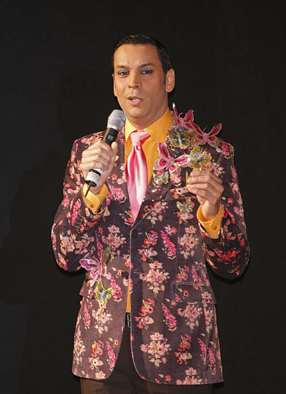 “It smells amazing, the girls look amazing and the drag queens look amazing!” said Richie Rich, who participated in the show last year with a “big flying saucer floral concoction.” 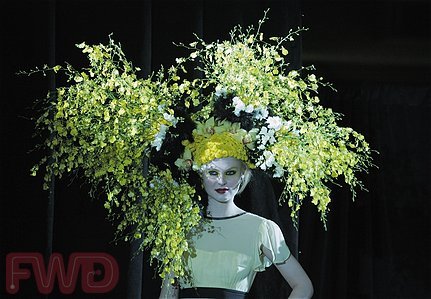 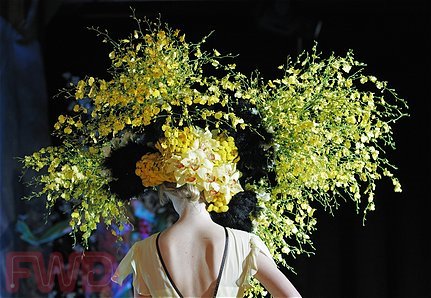 Though working with fresh flowers is no easy feat (“They don’t last! You’re trying to get them on, either sew them or with the glue gun, but the glue gun melts the flowers, and they wilt. It’s like an ‘America’s Next Top Model’ challenge!” explained Richie Rich), it didn’t stop the designers from dreaming up headdress that challenged gravity and gave a whole new meaning to the famous sixties song lyric, “If you’re going to San Francisco, be sure to wear some flowers in your hair.” 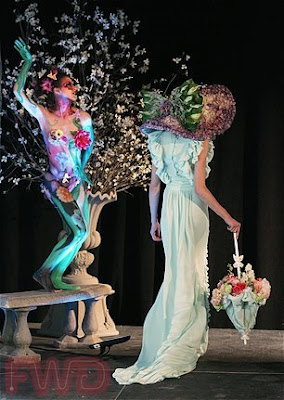 From a corset constructed entirely of pussy willow buds resembling tiny pearls by Empress 22 Charlene Chivoe of Imperial Court of New York (in collaboration with Tara McInerney of Morningside Greenhouse) to long garlands of flowers delicately woven into the model’s hair in Cynthia Steffe and Renny and Reed’s bohemian headdress, the results were varied, but for the five judges – Patrick McDonald, Alison Berlin, Maggie Norris, Frank Di Caro and Richie Rich – there were some clear stand-outs.

The judges named four winners – “Most Outrageous” went to Empress 13 Anne Tique of Imperial Court of New York in collaboration with Brian Fischer of Morningside Greenhouse for their enormous headdress featuring pencil cactus, orchids, peony petals and tillandesis; “Most Beautiful” was Alexis Bittar and Flowers Rock’s Victorian Cyber Goth creation; “Most Original” went to FORM New York and Aristocratic by Tammy’s white orchid and blue ostrich feather design and “Most Engaging” was awarded to the biggest headdress of the evening, Betsey Johnson and David Tutera’s “pussy willow chapeau” with irises, petal brim and grass construction.

Some fun backstage shots for you: 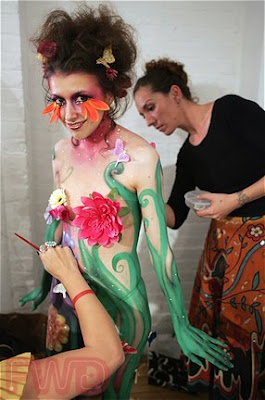 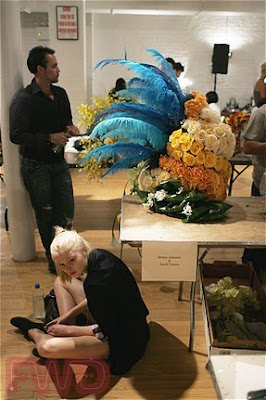 • Be sure to check out the post on the 2009 Tulips & Pansies Headdress Affair here, It’s even more spectacular!