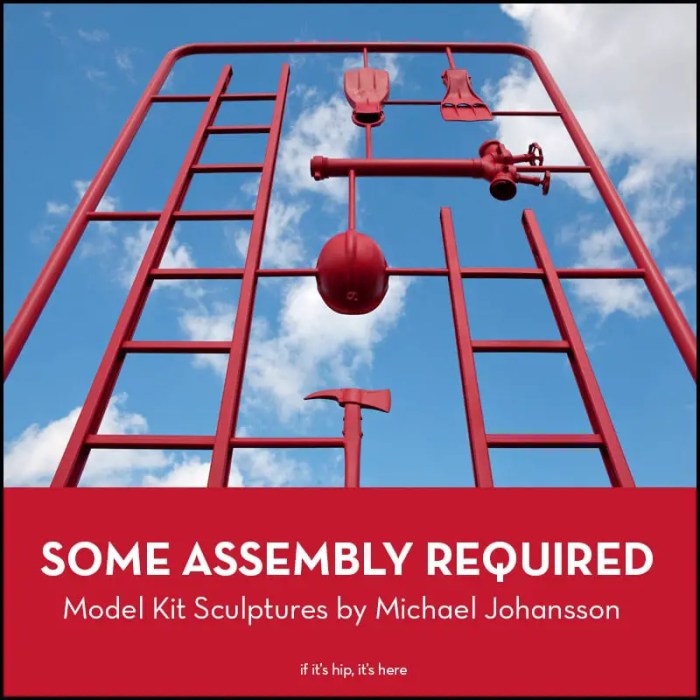 We love artist and sculptor Michael Johansson’s monochromatic sculptures. Made to look like the contiguous plastic molded parts that come with hobby toys and models, these life-size sculptures are made of welded metal and spray paint.

Fascinated by assembling objects from model kits as a child, Michael Johansson’s ongoing sculptural series are a fun take on those little connected molded plastic pieces that come in hobby model kits.

The Swedish born, Berlin-based artist has been transforming everyday objects – as well as entire rooms – into model kits of themselves since his first piece in the series, a boat titled TOYS’R’US (shown below), in 2006.

The pieces are joined together in a welded metal frame and everything is painted in a unifying plastic layer to resemble the surface of a model kit.

The life-size artworks are a commentary on today’s way of living – a synthesis of pieces that when assembled present a complete image. They have been commissioned, displayed as public art installations and exhibited as wall art.

Ranging from the mundane (a screw and a nut) to the complex (entire rooms), the inviting pieces allow the viewer to connect the pieces themselves and imagine a narrative of their own. The blue and orange Deja Vu (2020), now installed in the Regiment Park in Tuusula, reflects the transition from the park’s former Military use to its present use as a residential area: 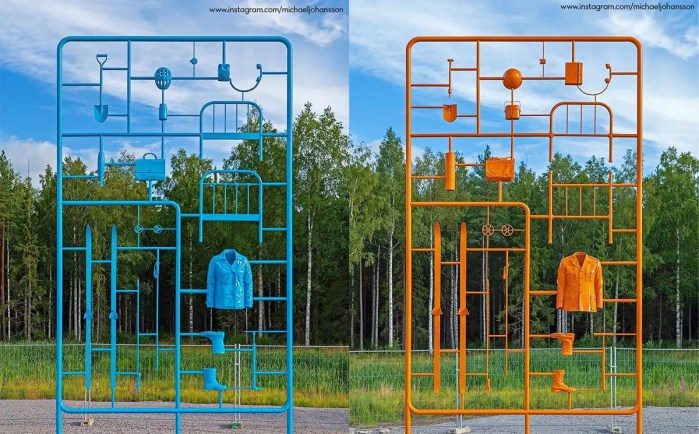 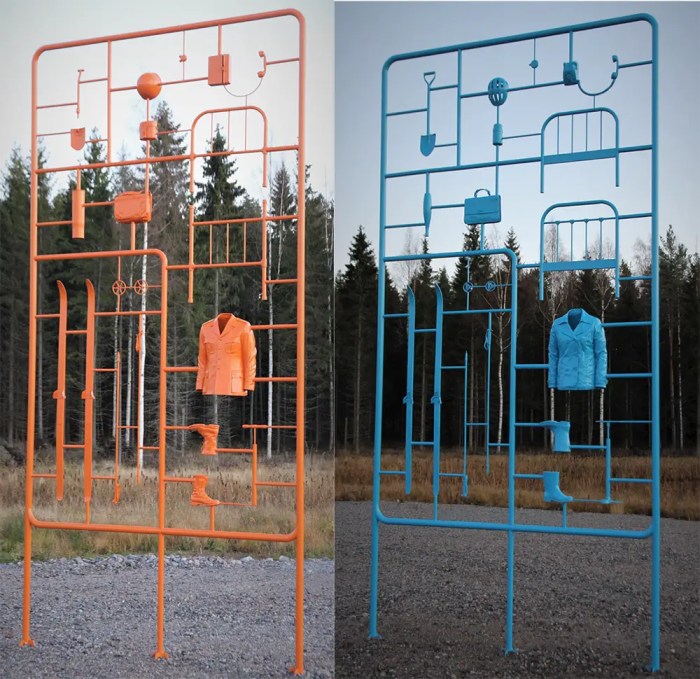 Living Room (2016) comprises a selection of items the artist collected at a recycling centre in Oslo: 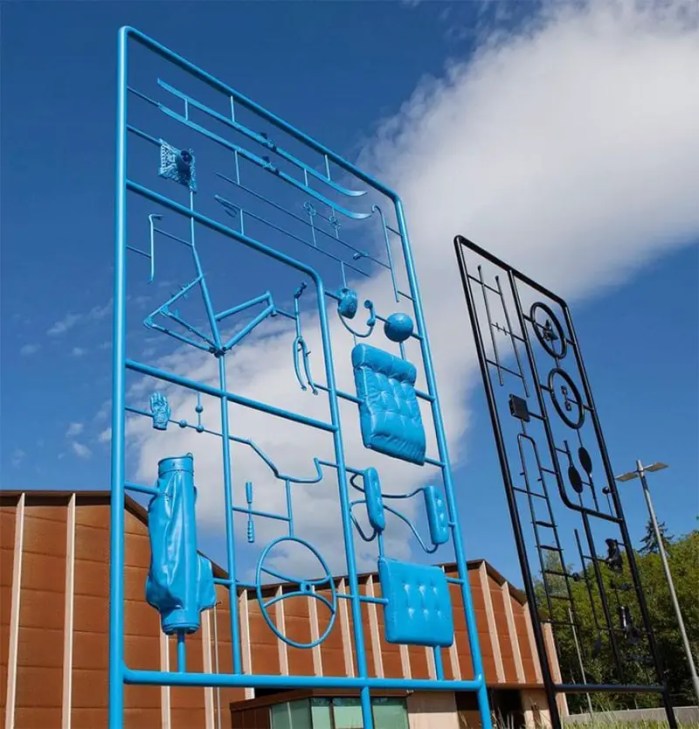 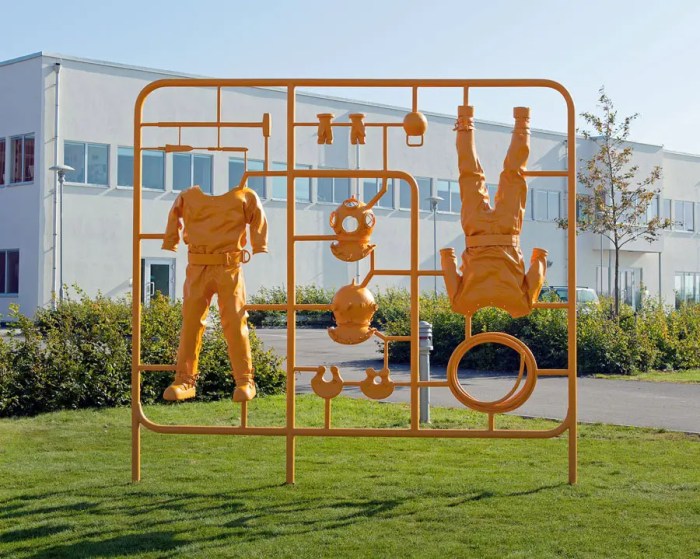 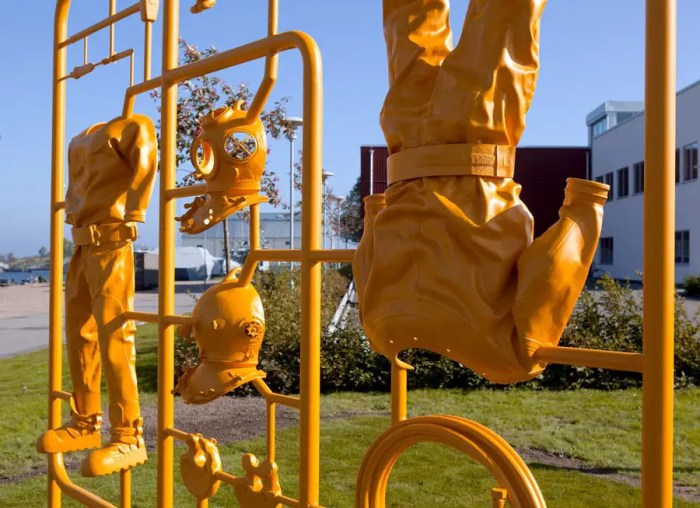 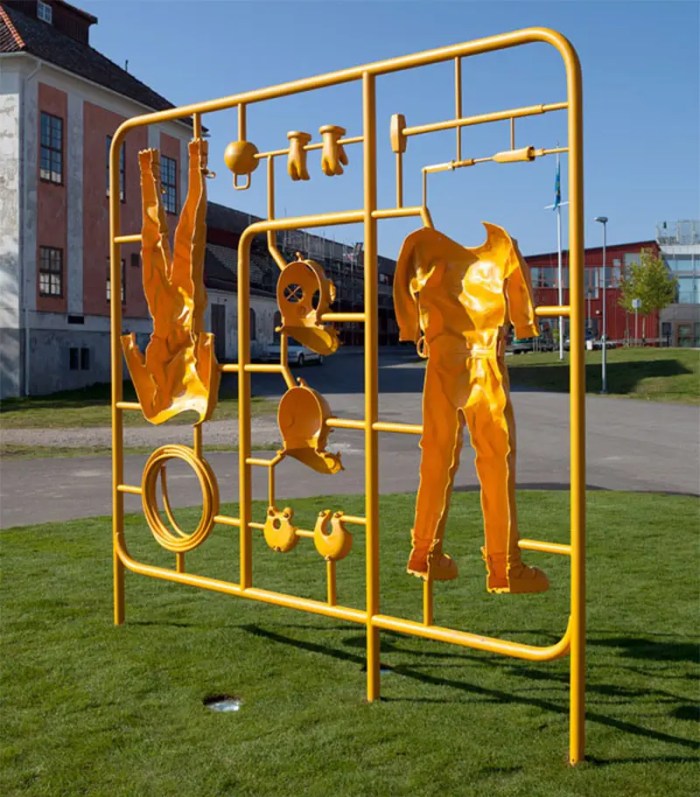 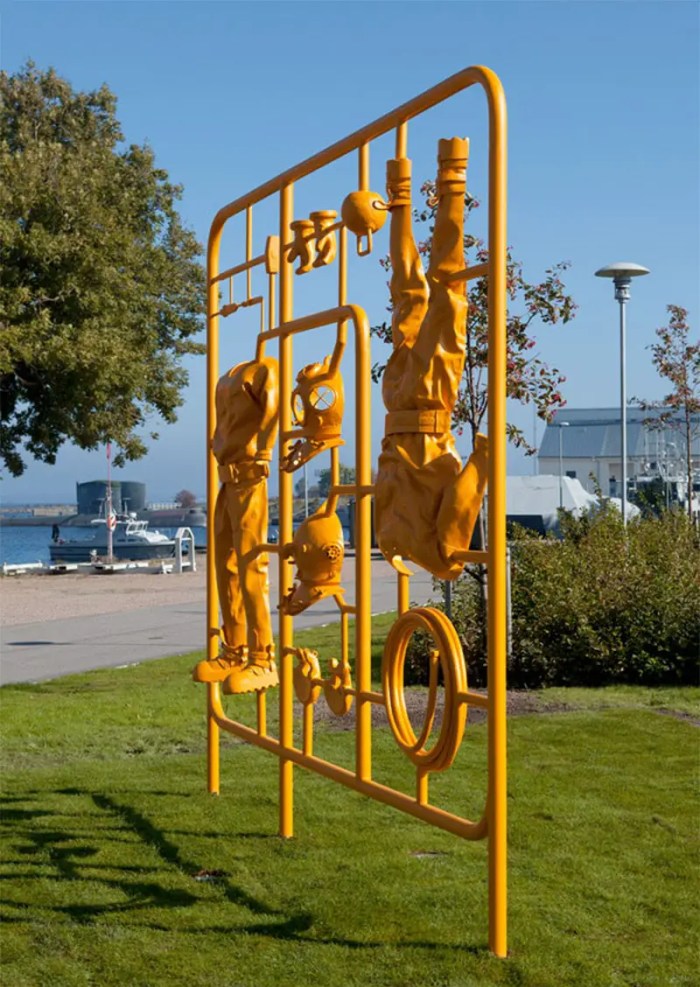 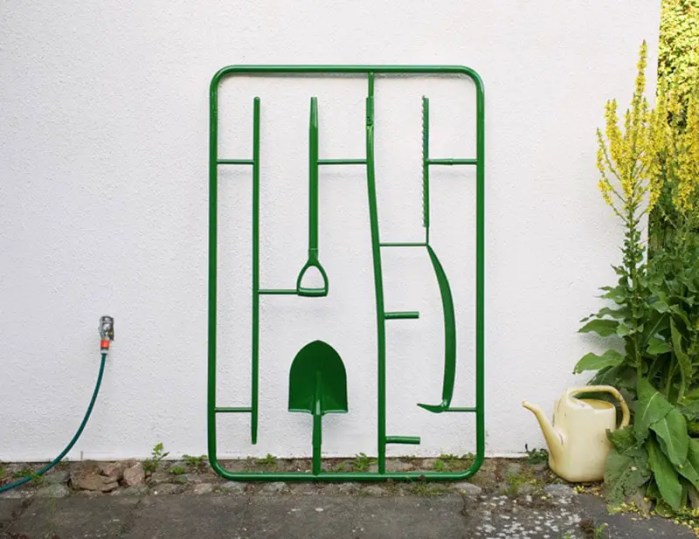 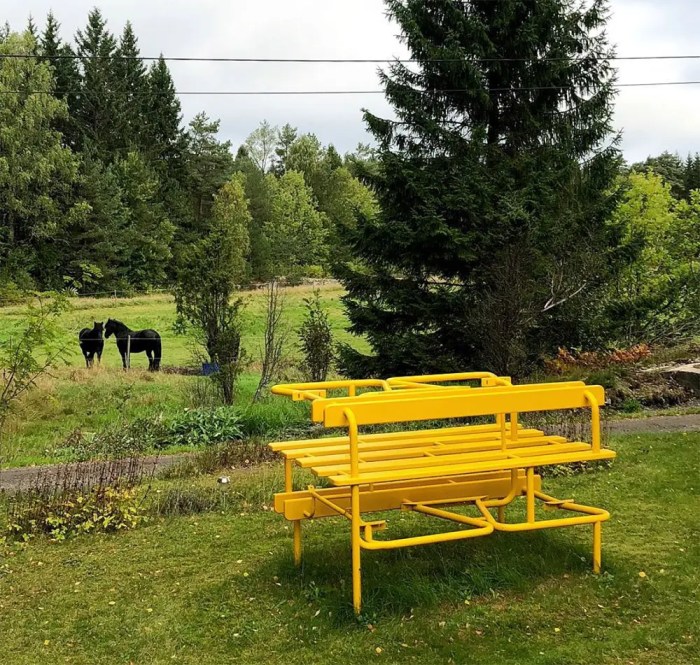 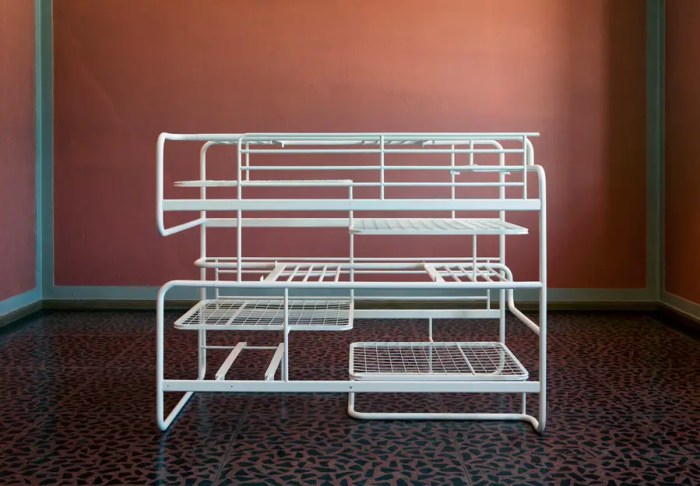 Wall Art
“Engine Bought Separately”, “Strings Attached” and “Some Assembly Required” are the three series names of under which these artworks fall. The Lawnmower piece shown above was one of the pieces in the onsite exhibition “Forever Never Comes” at Area Archeologica di Roselle in Grosseto: 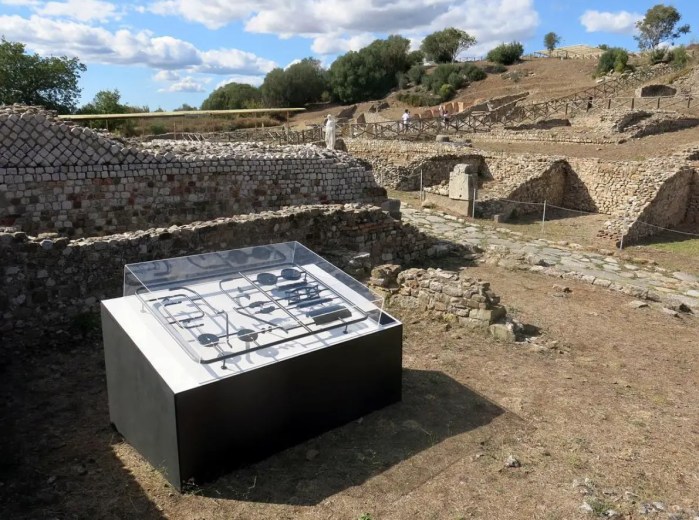 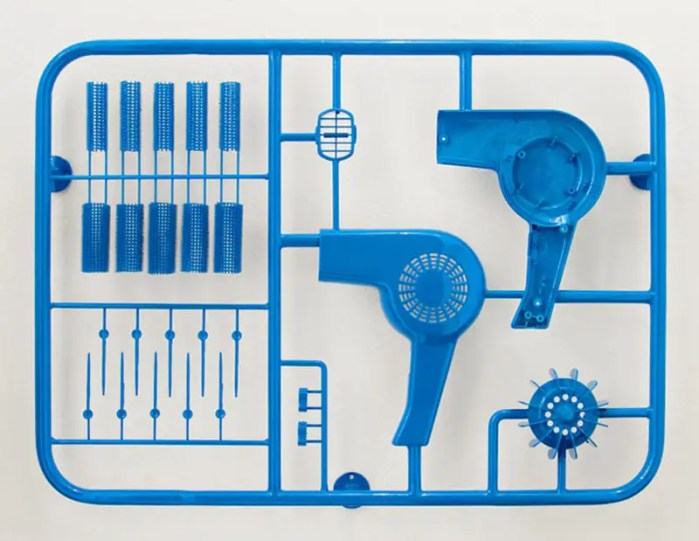 Artist’s Statement:
I am fascinated walking around flea markets finding doubles of seemingly unique, though often useless objects I have already purchased at another flea market. Despite the fact that I did not have any use for them even the first time, the desire to own two of these objects becomes too strong to resist. The unique and unknown origin of the object increases my desire to want the double – the unlikelihood of this sensation repeating itself produces an attraction that is too strong to resist.

This combination of the now-familiar and the new-unknown are among the various factors that come together to create the irresistible pull of these objects. This re-iterated fascination and the overwhelming desire that follows is central to my art practice.

I am intrigued by irregularities in daily life. Not those that appear when something extraordinary occurs, but those that are created by an exaggerated form of regularity. Colours or patterns from two separate objects or environments concur, like when two people pass each other dressed in the exact same outfit. Or when you are switching channels on your TV and realize that the same actor is playing two different roles on two different channels at the same time. Or that one day the parking lot contained only red cars.

These irregularities, these coincidences, are another focus of my artwork.

Be sure to see his other wonderful work at Michael Johansson

Paradise: An Animated Interpretation of The Garden of Earthly Delights