` Menurkey - A Thanksgivukkah Candelabra Created by A 9 yr old.
Skip to content 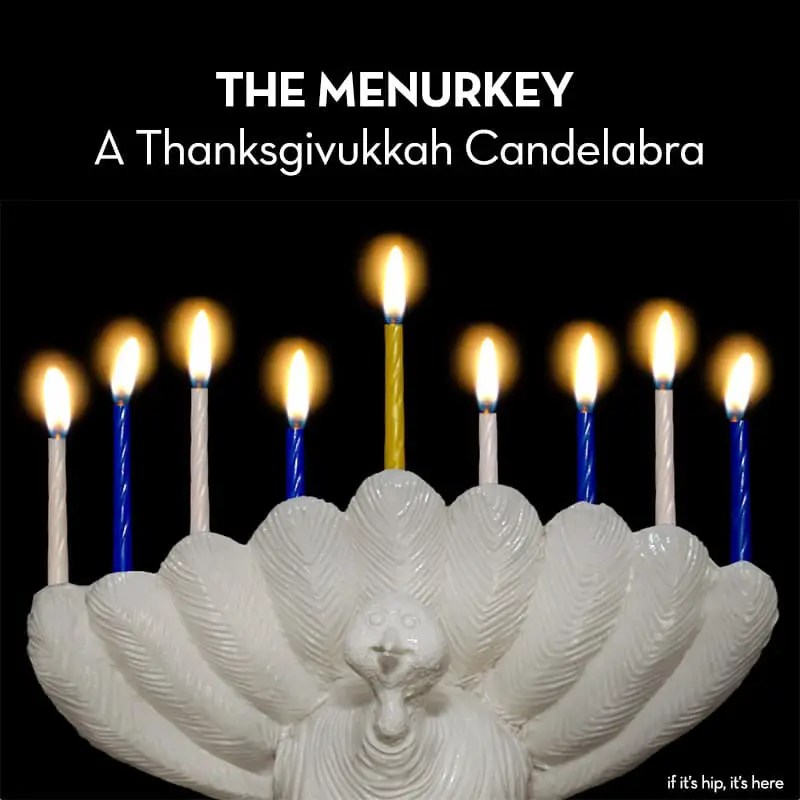 Although I won’t be adding it to my carefully curated list of modern menorahs, the Menurkey is something us Jews celebrating Hanukkah this year ought to at least know of. Since this year’s Festival of Lights falls on Turkey Day (an extremely rare occurrence that last time happened in 1861), it was inevitable that someone would create something such as this. The fact that it’s the brainchild of a 9 year old makes it even better.

The Menurkey is a combination Menorah/Turkey conceived of, designed and named by 9 year old Asher Weintraub, a fourth grader from New York City, who thought of the idea and the name when he learned of this strange calendar anomaly. He says one of the reasons he thought people might like to have a turkey menorah was because the holidays were similar – because in some way both commemorate being ‘thankful.’ above image of Asher with his Menurkey courtesy of WSJ

How he made it:
Asher used Tinkercad, a 3D modeling platform, to make the first sketches of the prototype:

Makerbot Studios then stepped in to help out by printing the 3D prototype: The Finished Editions
The Menurkeys are being made in a limited run of textured ceramic glazed Menurkeys and a higher volume edition of smooth plaster Menurkeys. The ceramic editions will be offered in two versions – white or blue )both shown below). The white plaster editions will be smooth (also shown below). Having already sold out of the limited glazed ceramic versions, you can still purchase the white plaster Menurkey. What began as a way to encourage one of their son’s ideas has grown into a mission – whomever Caroline Baron and Anthony Weintraub (Asher’s parents) tell about the Menurkey smiles and asks questions, and it’s a great way to discuss these two holidays. What better way to celebrate this strange but amazing occurrence with your family than with this funny and fascinating conversation starter? above: Asher Weintraub with his parents and younger brother 2020 Update: The Menurkey has since been updated: images and information courtesy of Menurkey.com

Tread Upon 100,000 Mini Porcelain Skulls To Ponder Your Legacy.