The American Ballet Theater presented the world premiere of its newest ballet, Whipped Cream, about a boy who consumes too many sweets and hallucinates about sugary treats, just last night. Choreographed by Alexei Ratmansky, scored for ballet by Richard Strauss (who also concocted the original libretto), the show features sets and costumes by Pop-surrealist artist Mark Ryden.

Ryden’s first foray into stage design, his creation for the two-act ballet are a sugary delight. Some of the characters, such as Mr. Snow Yak, have made appearances in Mark’s work before.

Thanks to Mark, The Los Angeles Times, ABT and the Segerstrom Center for the Arts I can share with you several studies, sketches, backdrops, props, photos and videos Mark created for “Whipped Cream.”

The story starts with Viennese children (performed by ABT dancers), who, after attending their first communion, ride from church in a big carriage to a pastry shop to celebrate. One of the boys shovels down too many desserts and falls into a delirium.

The end of the first act serves up a twist on the traditional “ballet blanc”: a whipped cream corps de ballet of women dressed in white emerge from the mixing bowl and slide down a chute. When the boy ends up in the hospital, he dreams of a rescue from the doctor by Princess Praline, along with Prince Coffee, Princess Tea Flower and other fanciful, sugary characters. “To contrast with all the light and fluffy stuff, we have the dark, threatening scene of the boy in the hospital,” says Ryden. The liqueurs seduce the doctor and nurses, who then become drunk. The ballet ends with a triumphant celebration of sweets. (source: Joseph Carmen for SCFTA)

Mark posted two videos on Facebook which I can no longer embed here. Try the links below to watch on Facebook:
•A peek of props being created for the show:
•Painting the backdrops 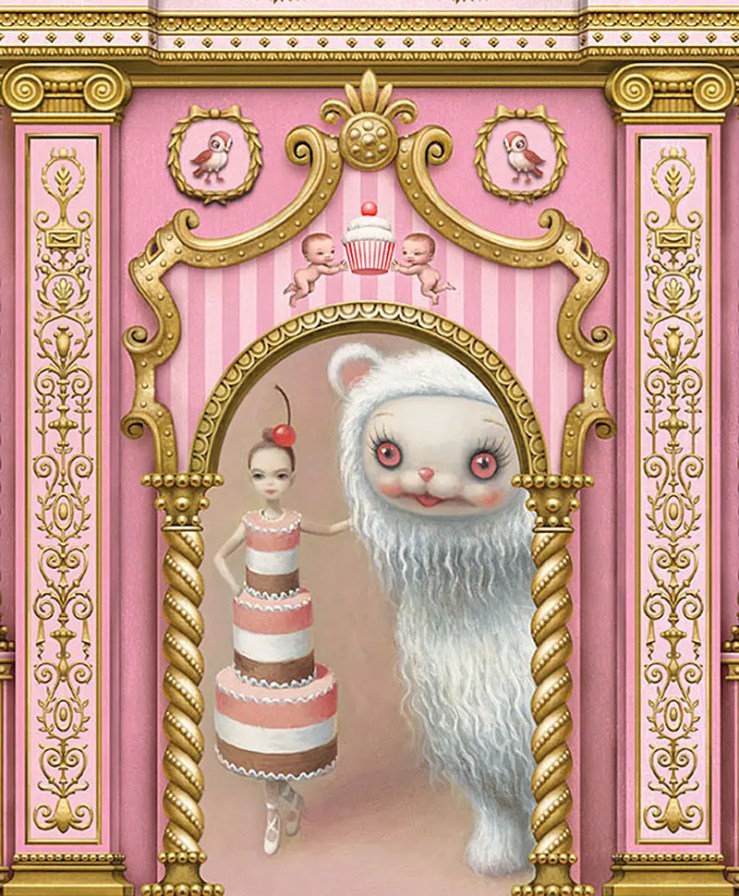 The New York Times reports:
“Whipped Cream” is Mr. Ryden’s first theatrical undertaking. In a telephone interview from his home in Portland, Ore., he said the experience of creating its costumes and décor had been a huge creative departure. “I am used to working in isolation and having complete control,” he said. “I like to create everything with my own hands, but it was a real joy to work with a group.”

He looked at some photographs from the original production but tried not to be overly influenced by the early designs. Instead, he wanted to incorporate “the 1920s aesthetic of a Viennese pastry shop in a very general way, and then give it a more modern, surrealist edge,” he said. “One of the things I really like about the whole production is the contrast between sweet and disturbing — maybe even frightening — elements.” Ratmansky clearly states that the ballet wouldn’t have happened without Ryden. “I contacted Mark and he said, ‘I’ve never done ballet or theater,’ ” he explains. “But since then, Mark led me into this journey. It all started to take shape.”

“Whipped Cream” will premier at the Segerstrom Center for the Arts in Costa Mesa, California this March 15, 2017, and later travel to the Metropolitan Opera House in New York City on May 22, 2017.