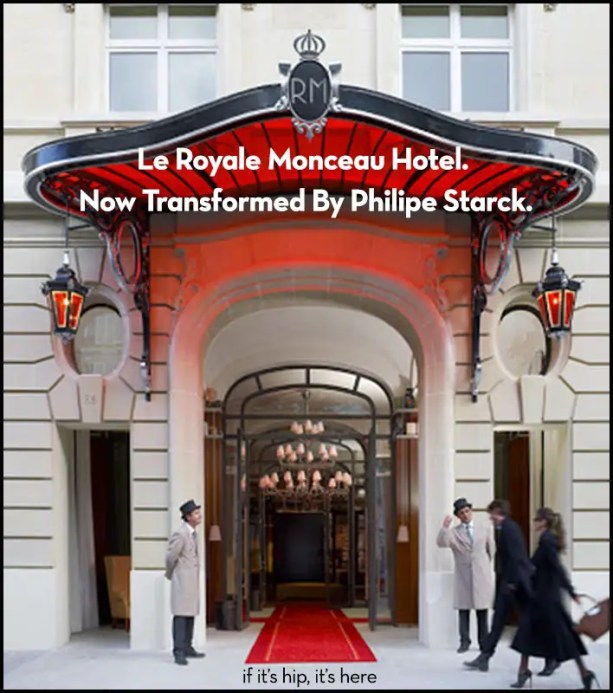 After undergoing two full years of important renovation work, Le Royal Monceau – Raffles Paris, which had closed down in June 2008, opened its doors in October of this year with a whole new look for the luxury hotel. With new decor by Philipe Starck, only minutes from the arc de triomphe and a curated collection of art, it’s no wonder it has quickly become THE place to stay. Impelled by Qatari Diar and Alexandre Allard the creative director, designer Philippe Starck completely transformed the place and re-invented its spirit so as to make Le Royal Monceau – Raffles Paris the first hotel in a new generation of Parisian palaces. The Royal Monceau Raffles Paris has produced a collection of over 300 works of art to be displayed in the guest rooms and the public areas. The project is to include contemporary art in the everyday life of the hotel, within a set of dedicated places like la Librairie des Arts, the Art District or Le Cinéma des Lumières.

The artistic program of the hotel is multidisciplinary, and accessible to everybody. The Royal Monceau Raffles Paris offers a cultural service through the art concierge and the hotel team. The art concierge is in charge of coordinating this service unique in Paris, acting as an advisor and cultural mediator both to customers and the staff. The art concierge is there to guide the residents of the Royal Monceau Raffles Paris through their cultural journey in Paris, informing them of the artistic news and creating personalized activity programs.

They have a blog dedicated to art as well, called Art For Breakfast.

Establishing itself for the first time in Europe, Raffles hotel group is in charge of the management of the hotel while Sylvain Ercoli was appointed managing director, after holding the same position in some of the most prestigious hotels in the world.