` Kip Omolade Diovadiova Chrome Portraits - If It's Hip, It's Here
Skip to content 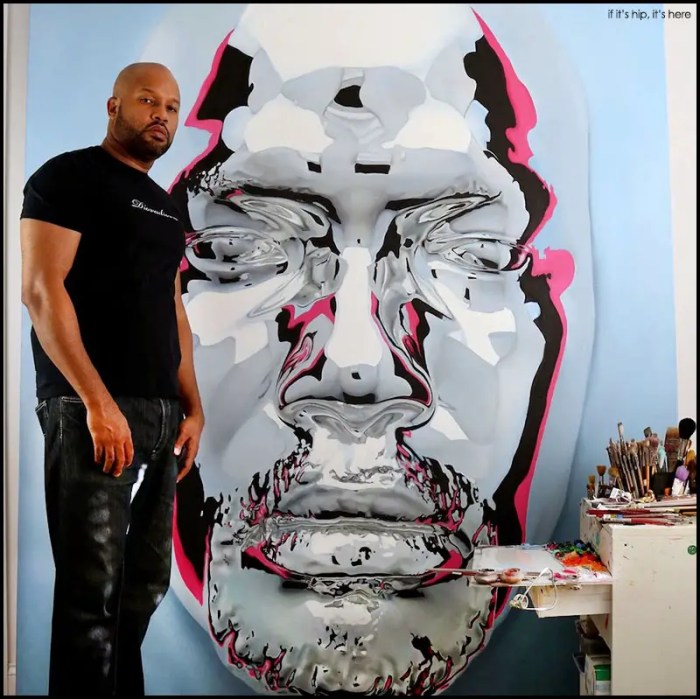 Diovadiova Chrome by artist Kip Omolade is an ongoing mixed media series of chrome portraits that combine African heritage with contemporary pop culture. Inspired by historical African masks and sculpture, the large colorful pieces are created through a labor-intensive process of photography, mold-making, casting and painting.

Diovadiova is a name and concept the artist developed himself to combine the concept of immortality and contemporary iconography. Dio is the Italian word for God and Diva, in the historic sense, means Goddess.

In the series of vibrant-colored portraits, the artist combines historical reference with today’s perceptions of beauty and luxury. Representing a mask that serves as a conduit between the spiritual and natural world, the art is inspired by ancient, traditional African sculptures such as Benin ivory masks and Ife bronze heads. Omolade casts the masks himself and then uses them as models for his hyper-realistic paintings, rendered in intensely vibrant colors.

“I was studying the relationship between art and celebrity, but the process allowed me to explore various ways of representing a person’s face,” he said. “One of my final versions of the ‘Diovadiova’ model was a metallic rendition that referenced sci-fi characters. First I used a combination of sculpture, Photoshop and painting to achieve the shiny surface. But in terms of self-expression, I wanted something that was more truthful. With a lot of trial and error, I developed my chrome technique.” – Kip Omolade

The labor-intensive process involves making a mold and cast of each model’s face, reworking the cast plaster sculpture, producing a version in resin and adding a chrome layer with artificial eyelashes and finally rendering a large photo-realistic oil painting on canvas. The artist puts his best face forward with The Man in the Mirror, literally. For this self-portrait series, Kip used a mold of his own face.

In his own words, Kip says of the work “My self-portraits examine immortality, identity and spirituality as an on-going part of The Diovadiova Chrome series. Originally, The Diovadiova studied the relationship between celebrities and deities, but it has transformed to convey notions of beauty, luxury and power. The project has now further expanded to explore my place in world history as an African American man.

Initially, women of color were my inspiration. However, several of the Diovadiova Chrome portraits of women already depict images of my face. In painted vignettes, I am in the reflections photographing the sculptures. This was a way of using art itself to show the creative process. These embedded selfies were also the first glimpses into my current exploration.

To create the paintings, I used a mold of my face to make a chrome sculpture. Photographs of the sculpted model in various lighting and settings served as references. The remaining painting process is autobiographical as it connects to different stages of my life. The bright, saturated colors and intricate, abstract shapes recall my graffiti days in NYC during the 80’s. My teenage internship at Marvel Comics influences a futuristic, sci-fi aesthetic. The use of oils is the result of painting from life at The School of Visual Arts and The Art Students League of New York.

There is a historical link between Diovadiova Chrome and ancient West African Ife bronze heads. The artifacts required a highly skilled technique and were also crafted from a casting method. These once shiny sculptures used a realistic, yet stylized, method to represent royal deities, but what remains is a universal sense of dignified humanity. While these heads represented actual people, there was a connection to a timeless, higher power. Similarly, my work does not attempt to capture an exact likeness but rather something deeper. I am trying to paint my soul. — Kip Omolade”

About the Artist (from his own site): Born in Harlem, NY Kip Omolade began his art career as a graffiti artist while interning at Marvel Comics and The Center for African Art. He continued his studies at The Art Students League of New York and earned a BFA at the School of Visual Arts. His work has been exhibited in galleries around the world and on Good Morning America, Huffington Post, Juxtapoz and Hi-Fructose. Special projects and partnerships include collaborations with Sony Music, Red Bull and Nike. His work was featured on the album cover of R&B recording artist Fantasia’s latest release “Definition of…Fantasia”. Viacom exhibited and acquired his Diovadiova Kitty Cash V painting, which was a tribute to New York City.