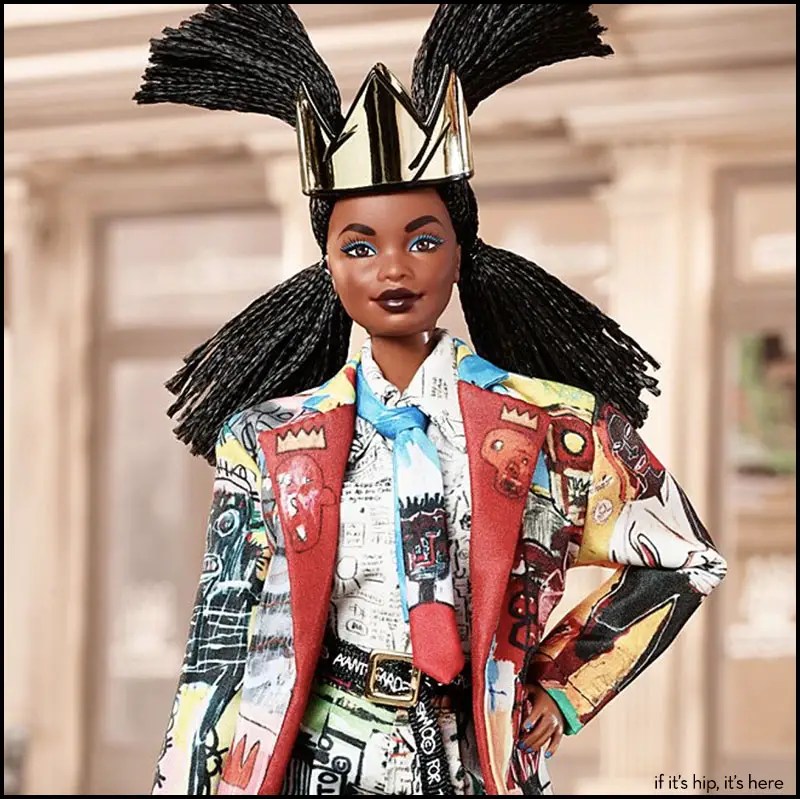 Mattel has just released their latest Art-inspired Barbie and it’s a Jean-Michel Basquiat X Barbie Doll! Stunningly designed by Carlyle Neura, the Barbie Signature doll undoubtedly destined to become a collectible, has just been unveiled and can now be pre-ordered.

The last time Mattel released artist-inspired Barbie Dolls in the likenesses of paintings by Da Vinci, Van Gogh, and Klimt, they sold out immediately and now command hundreds, if not thousands of dollars. It’s likely this fabulous-looking doll will do the same. 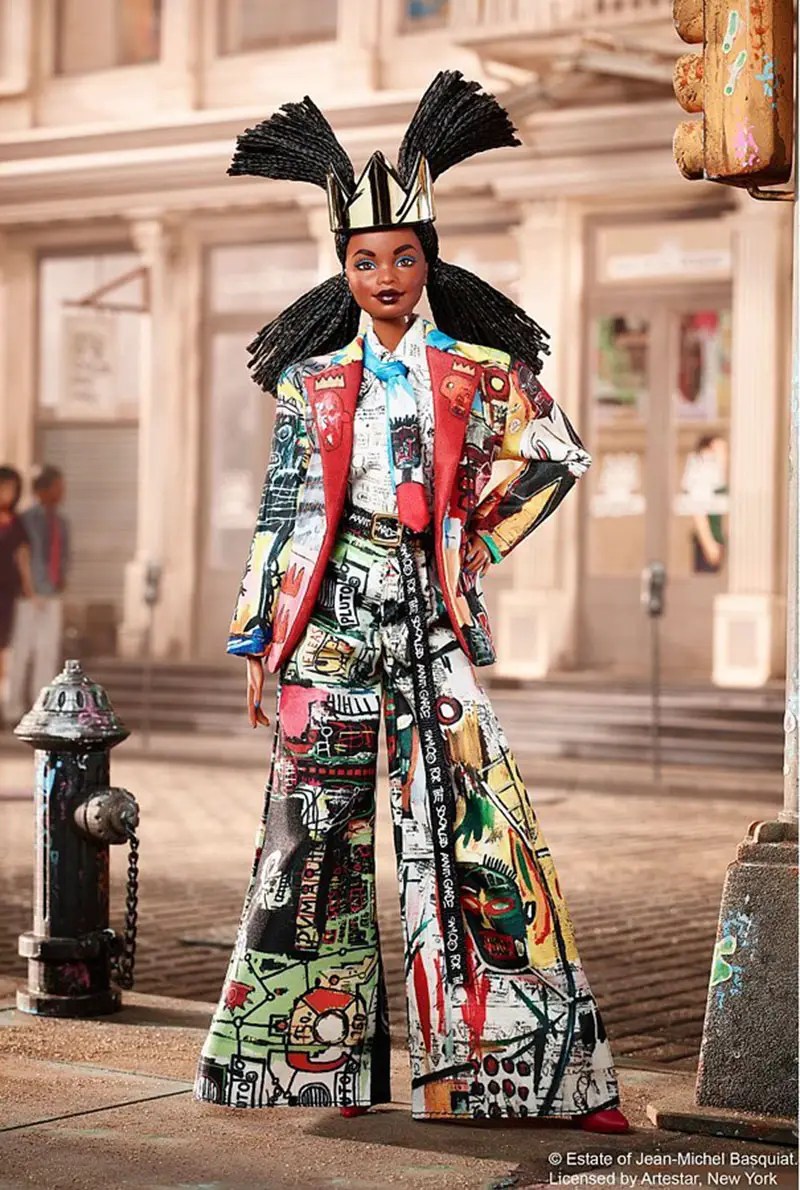 In a stunning tribute to the artist, Jean-Michel Basquiat X Barbie® Doll wears a head-to-toe ensemble featuring many well-known elements from works spanning Basquiat’s career. According to Mattel designer Carlyle Neura, “Each piece of the doll’s outfit is printed with a different work of art spanning his entire career. My favorite piece is ‘Big Joy,’ circa 1984, printed on the suit jacket’s left arm.” The elements from Basquiat’s works are brought together in a bespoke suit with wide-legged trousers, a jacket, shirt, tie and belt, all emblazoned with his signature artwork in a lively color palette. Bold makeup and a golden crown finish her striking look. 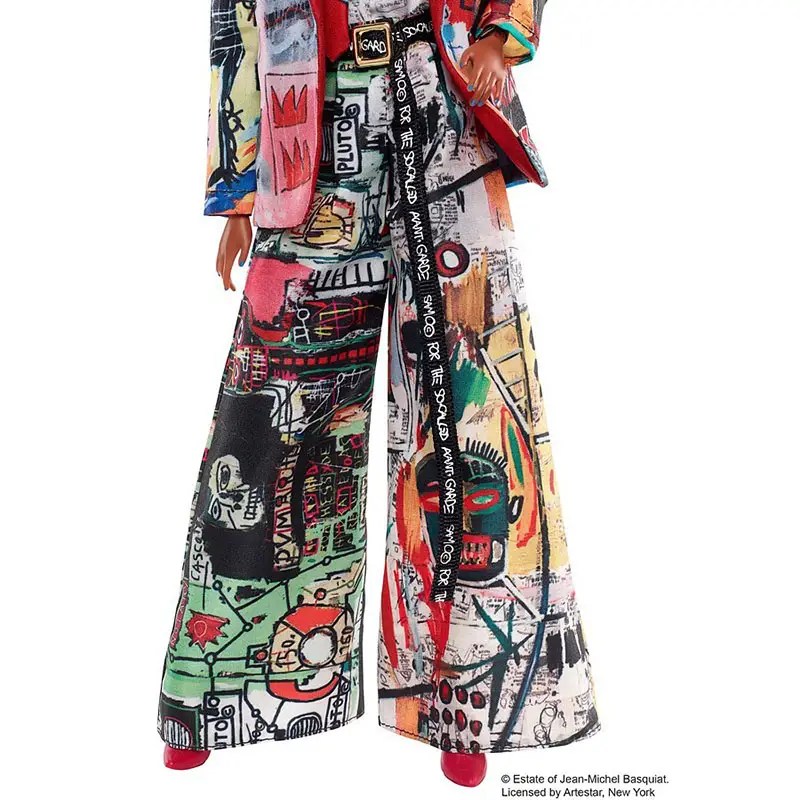 “He often wore suits, sometimes even painting in them, so I put Barbie in a suit, making it super oversized to evoke a 1980s vibe, which was Basquiat’s heyday. Each panel of the suit, shirt, tie and belt is printed with a different work spanning Basquiat’s career, my fav is ‘Big Joy’ circa 1984 on suit jacket’s left arm! The belt features a repeat of Basquiat’s early ‘SAMO’ tag. There’s a portrait of Basquiat where he wears the right side lapel of this shirt tucked underneath his tie, so I wanted to replicate that specific styling. Barbie’s hair was inspired by Basquiat’s signature dreadlocks, crowned with a 3D version of Basquiat’s 2D crown.”- designer Caryle Neura 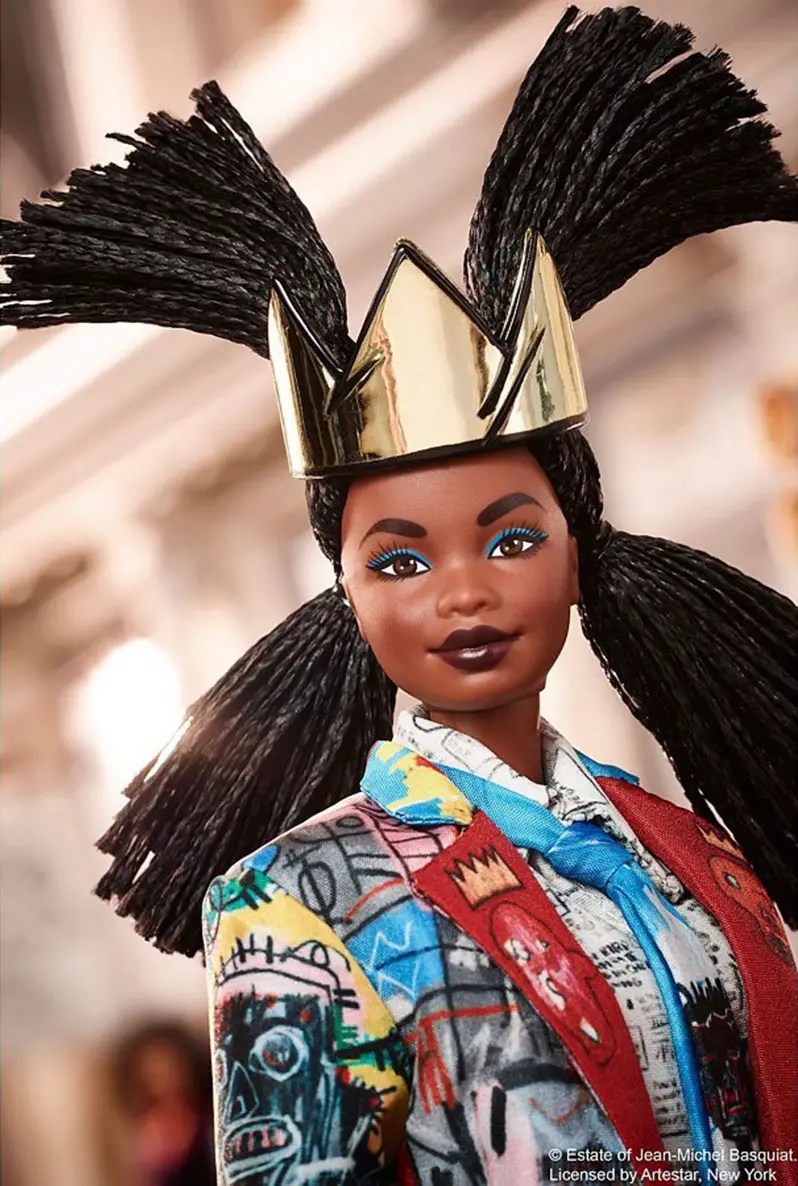 • Barbie celebrates acclaimed artist Jean-Michel Basquiat, whose inspired work played a vital role in elevating street art to the upper echelons of the art world.
• Jean-Michel Basquiat X Barbie doll wears a head-to-toe ensemble featuring many well-known elements from works spanning Basquiat’s career.
• She shines in a suit of wide-legged trousers, a jacket, shirt, tie and belt, all emblazoned with his signature artwork in a bold color palette.
• Barbie doll wears a golden crown in her braids to finish her striking look.
• Celebrate Jean-Michel Basquiat’s life and work with this collectible, giftable Barbie doll. Includes doll stand and Certificate of Authenticity. 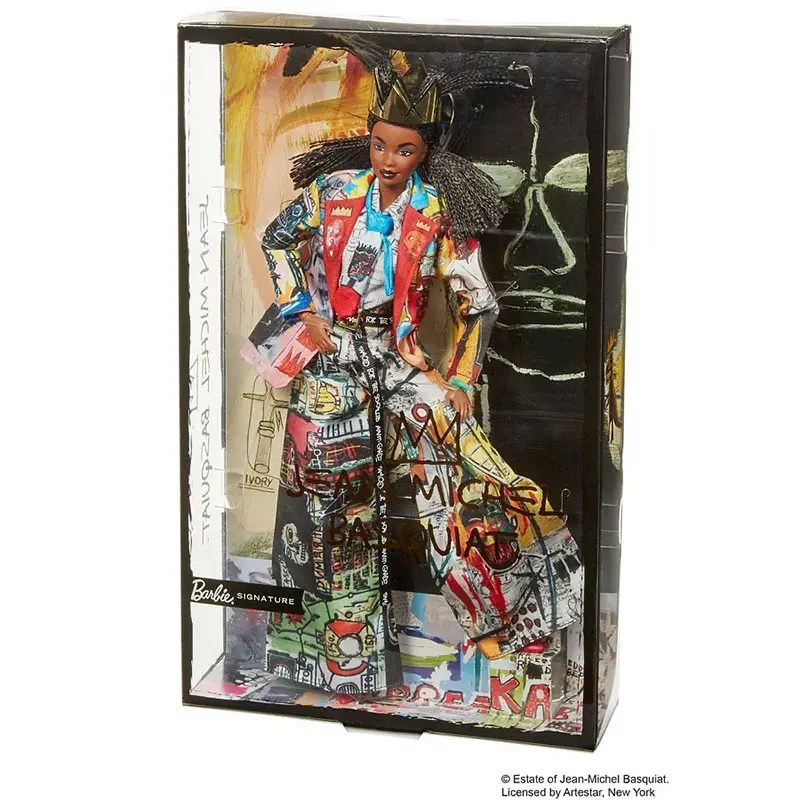 Thank you to Carlyle Neura and Barbie for the images and information.