Commissioned to celebrate the 150th anniversary of Canada aka Confederation, sculptor Janet Macpherson has created an immersive installation, A Canadian Bestiary, of slip cast porcelain creatures and animals. 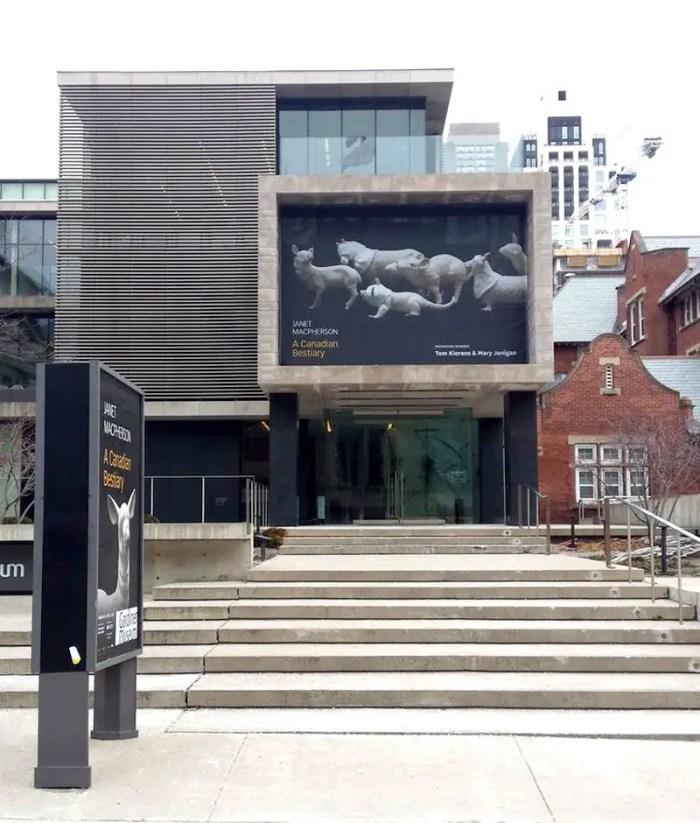 Drawing on her own experiences, memories of a Catholic childhood, illuminated manuscripts, medieval monsters, and a distinct visual language of hybrid creatures that stand in for the complexity of human interaction, McPherson is exhibiting at Toronto’s Gardiner Museum. The installation, A Canadian Bestiary, revisits moments in Canadian history and questions commonly-held conceptions about the North, identity, and our relationship to landscape. In the four sections of the installation: Reliquary, Migration, Decoy and North of North, the intricate slip cast porcelain animal forms are curious, hybrid creatures, often diminutive in scale, wrapped, bandaged or masked. Others are full-sized and true to life. The experience includes sound design by Justin Haynes and Janet Macpherson, and video projections by Renée Lear. Murray Whyte of The Toronto Star writes that ““Decoy” (the bigger beasts, bandaged as they are) nods to subsistence hunting in the early days of colonialism and the interdependence of species we’ve thrown out of balance; “Migration,” the bridge, makes plain that we’re a nation of immigrants, as much now as in the past, with all its complications and hardships; “North of North,” those twisted creatures in low light, represent the weird patriotic connection we have to a place so few of us have seen; and “Reliquary,” where Macpherson brings it all home.” (read Murray Whyte’s full review here) Decoy, with its larger bandaged animals (deer, wolf, owl and ), represents the interdependence of species thrown out of balance as a result of hunting: In Migration, a video of animated Canadian Geese by video artist Renée Lear serves as a backdrop to a procession of tiny creatures, some with gilded hooves, wearily making their way across an arched bridge: 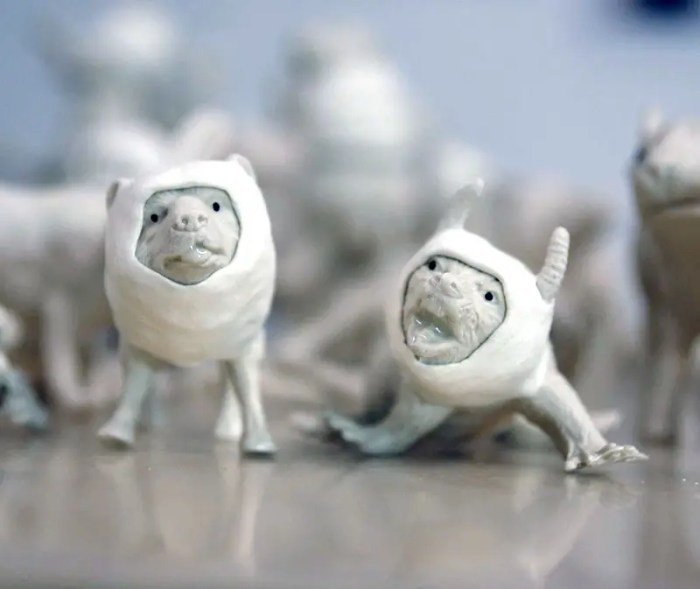 North of North is separated from the installation by a blue green backdrop and features individual animal limbs, pieces and twisted creatures: 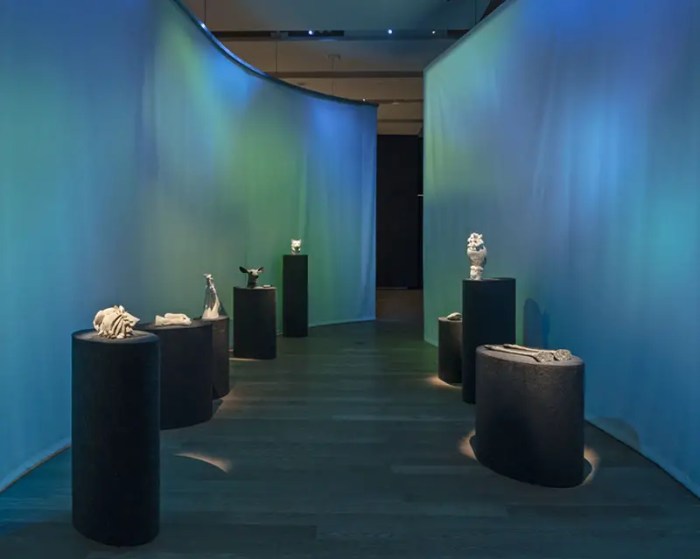 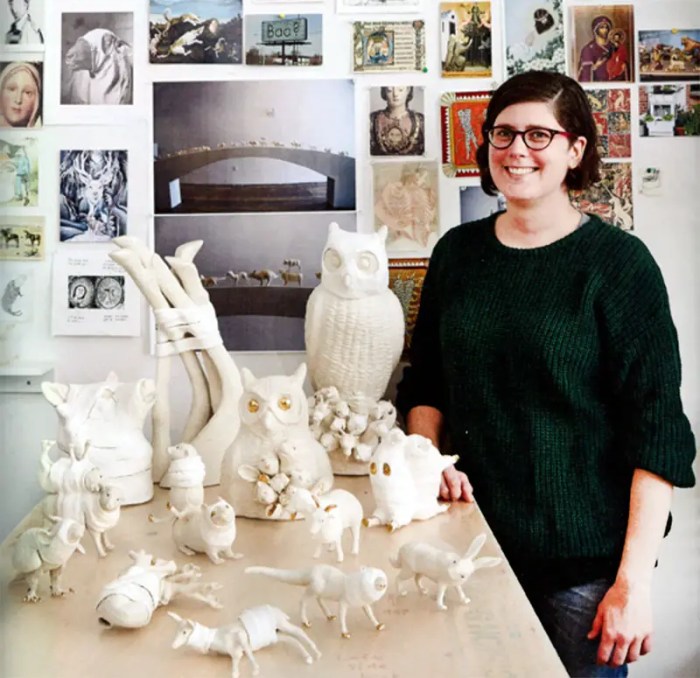 Humans have a complicated relationship with their physical bodies. My work explores this idea, specifically the denial of this physicality that was prevalent in my Catholic upbringing, while simultaneously asserting the body’s messy and powerful presence. This work is influenced by the history of Christianity, martyrdom, and the monstrous. Like the fragmentation of the martyred body, the monstrous body exhibits dissolution of parts, and shows in its disquieting form, hybridization, lack and excess. My work also addresses the hierarchical beliefs around nature in which we categorize, consume and attempt to control the natural world. Using re-purposed commercial plaster molds as well as hand-made molds cast from found toy animals, knick-knacks, and religious statues, I re-compose objects that upon closer inspection reflect an unsettling manipulation of human and animal bodies. 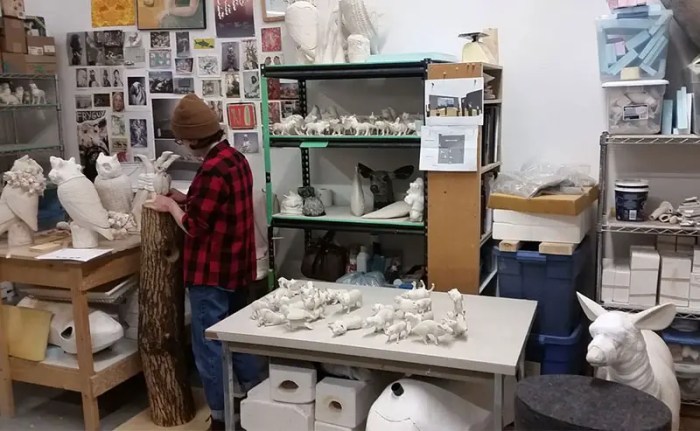 Recently I have been wrapping animal forms in damp porcelain sheets – binding, bandaging the figures, and contemplating the intentions of these gestures. Inspired by visits to the Ohio State Agricultural Fair in Columbus, where farm animals were clothed in protective fabrics, tethered tightly to posts, awaiting exhibition and judging, I have begun assembling my own slip-cast menagerie, in which I play with forms of domestication, sanitation and restraint. Through the use of animal forms I explore ideas of repression, confinement, and torture, the animals becoming a metaphor for our relationships with others, and how we understand ourselves. The exhibit is on display at The Gardiner Museum through May 21st.

images and information courtesy of the artist, The Gardiner Museum and the Toronto Star

The Penis Wall Is An Interactive Wall Of Waving Willies by Peiqi Su.