The AES+F group, a creative collective who combines photography, video and digital technologies, will be showing their bizarrely compelling video installation of “Inverso Mundus” (World Upside Down), an absurd interpretation of 16th century engravings at this year’s LOOP Barcelona. 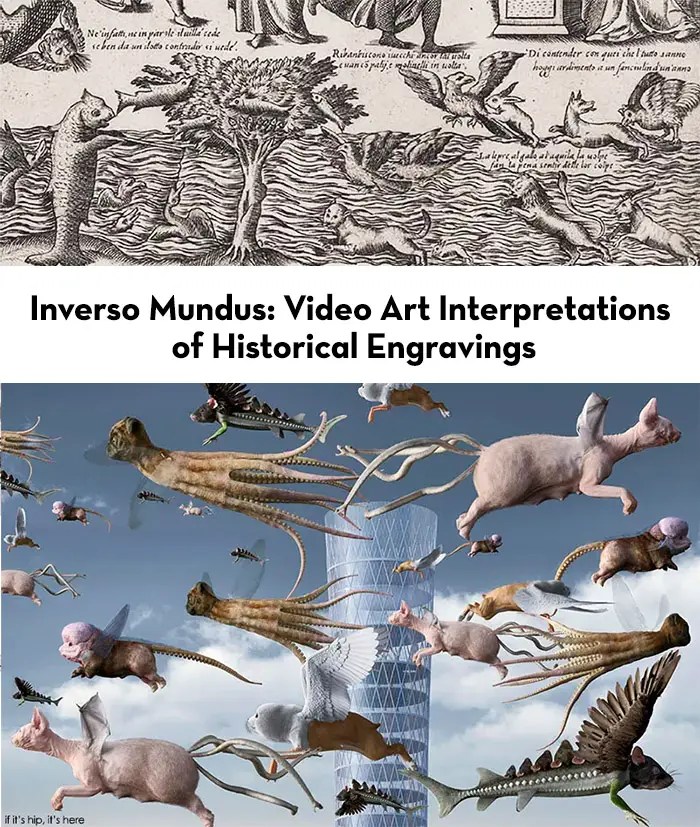 One of the most talked about projects from the 56th edition in the Venice Biennale in 2015, Inverso Mundus, is a feast for the eyes. The visual narrative was inspired by historical engravings.

The series of centuries old engravings “Inverso Mundus” (The World Upside Down) depicts a pig gutting the butcher, a child punishing his teacher, a man carrying a donkey on his back, men and women exchanging roles and costumes, and a beggar in rags majestically giving alms to a rich man. In these engravings there are demons, chimeras, fish flying through the sky, and death itself, depicted variously with a scythe, or behind the mask of Doctor Plague.

In AES+F’s interpretation of “Inverso Mundus”, absurd scenes from the historical carnival appear as episodes of contemporary life in the form of a 7-channel video installation, stills of which are shown below. 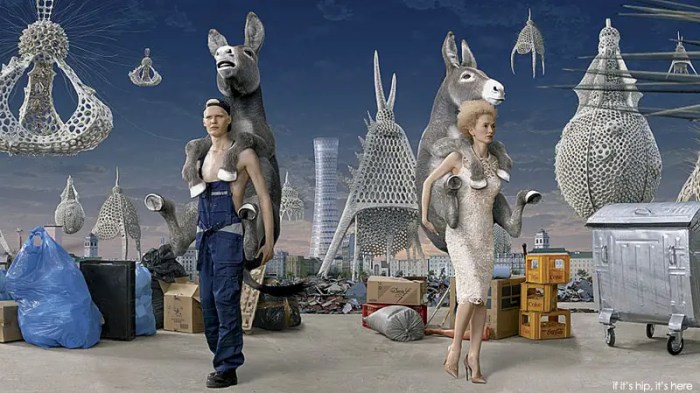 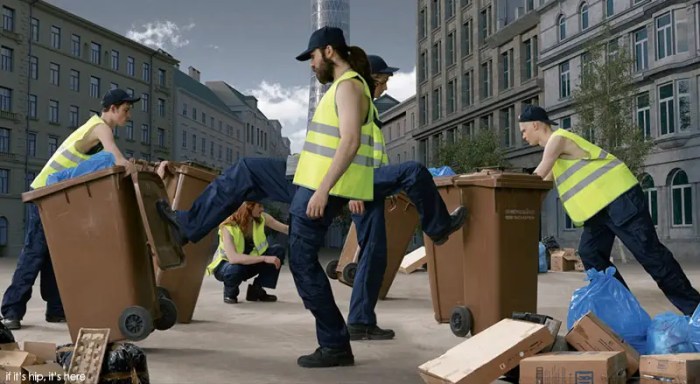 Characters are acting out scenes of absurd social utopias, changing their masks, morphing from beggars to rich men, from policemen to thieves. Metrosexual cleaners shower the city with debris. Female inquisitors torture men on IKEA-style devices. Children and seniors are locked in a kick-boxing match. “Inverso Mundus” is a world where chimeras are pets and the Apocalypse is entertainment.

Stills from the project are available for purchase from Galeria Senda

About AES+F Group:
AES Group was originally formed in 1987 by the conceptual architects Tatiana Arzamasova and Lev Evzovich and the multidisciplinary designer Evgeny Svyatsky. Exhibiting abroad from 1989, the group expanded its personnel and name with the addition of the photographer Vladimir Fridkes in 1995. AES+F’s recent work has developed at the intersection of photography, video and digital technologies, although it is nurtured by a persistent interest in more traditional media — sculpture especially, but also painting, drawing and architecture. Deploying a sophisticated, poetic dialogue among these media, and plumbing the depths of art history and other cultural canons, AES+F’s grand visual narratives explore the values, vices and conflicts of contemporary culture in the global sphere.

For more than a decade, works by AES+F have been showcased in signature festivals and biennial exhibitions of contemporary art around the world, including — in addition to Moscow and Venice — those of Adelaide, Gwangju, Havana, Helsinki, Istanbul, Kiev, Lille, Lyon, Melbourne, St Moritz, Sydney, Taipei, Tirana and Toronto. Their work has also been featured in influential events devoted to new media — such as ARS Electronica (Linz), Mediacity Seoul and Video Zone (Tel Aviv) — and photography — such as FotoFest (Houston), Les Rencontres d’Arles and Moscow’s Photo Biennial.

Judging Art By Its Cover. The Book Sculptures Of Mike Stilkey.