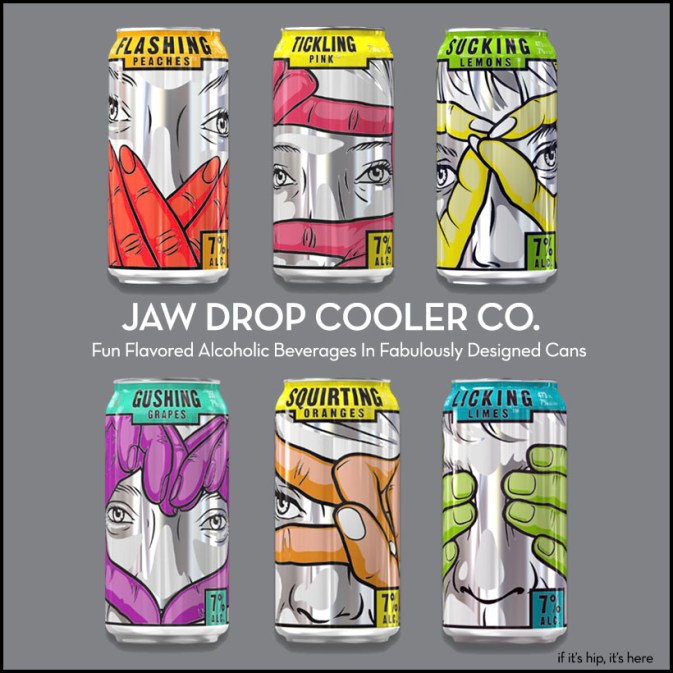 Located in Vancouver, British Columbia, The Jaw Drop Cooler Co. was launched in Spring of 2012 by Aquilini Brands – best known for their real estate holdings but who also launched the 2011 Bassano Hard Soda, which seems to have been replaced by this new collection of flavored vodka and malt beverage coolers.

The line began with two flavors, in eye-catching can designs: Sucking Lemons and Puckering Punch. Squeezing Melons and Licking Limes are the two latest flavors to join the line. At one point, Biting Oranges and Blowing Rasberries were amongst the flavors, but those flavors have been retired and new ones have been added. At last check, the line consisted of the six flavors shown below.

When we wrote this post, only the four flavors shown below were available. As of 2019, they offer 6 flavors, but the drinks are now only available in British Colombia and Ontario. However, that doesn’t distract from the fabulous branding and package design. SUCKING LEMONS
The original Jaw Drop Cooler. Sucking Lemon’s blend of bubbly citrus has been turning company picnics into raves since 2012. Take a big gulp of life and try this tasty beverage. PUCKERING PUNCH
The nostalgia of punch fused with grown-up vodka refreshment = ultimate cooler bliss. If you’re down for a mouth-watering combination of cherries and Tropical flavours, then Puckering Punch is the drink for you. **NEW** SQUEEZING MELONS
Spilling over with voluptuous watermelon flavour! This fun, crimson slush bounces right up in your face and delights the senses. Package Design
Brand Ever was responsible for the terrific brand identity including the naming, fabulous packaging, and collateral designed for the products.