With all the ugliness going on in our nation’s capital these days, it’s the perfect time to share with you a beautiful take on Washington D. C. as seen in these hauntingly elegant infrared photos of Washington D.C. by Scot Howard. 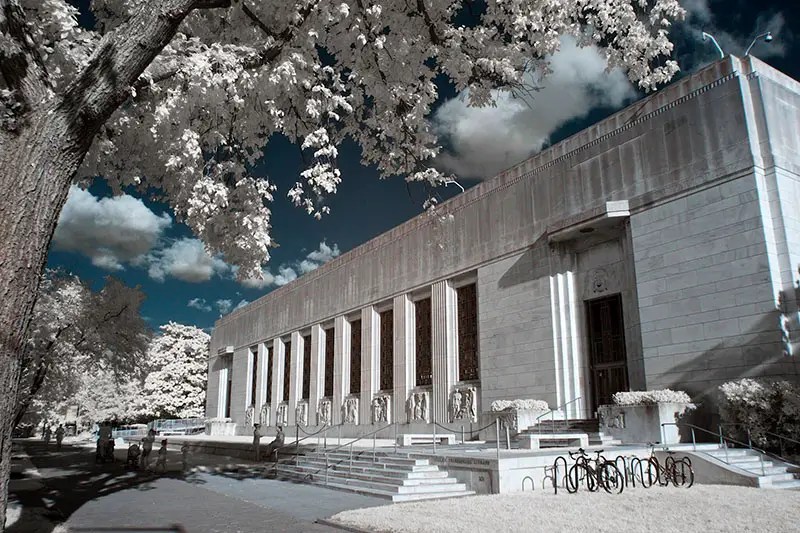 I first came across these photos on Facebook and I was mesmerized. A longtime fan of infrared photography I have often found that much of it screams “effect.” Not so with these lovely images of Washington D.C. by Arlington, Virginia-based illustrator, designer and photographer Scot Howard.

I wrote to Scot inquiring about his photos and whether or not I could feature them on the blog. He was humble and helpful and told me a bit about his hobby began. Below are many of his photos of Washington D.C. and the surrounding areas interspersed with Scot’s words.

“I have lived in the DC area since 1967. It was a dirty place then, tragically polluted and a little scary. In early years I never really identified with DC, it was just a place into which circumstance had deposited me. But I have watched DC grow into a clean and truly beautiful city, and through the years the two of us have grown together. Now I look around and see—and finally begin to appreciate—the power of the its symbols, its iconography, and I feel a deep connection to it. This is the inspiration behind my current project.”

“As I developed my Infrared photography, which began as a lark, but quickly consumed me with its potential for surreal beauty, I realized that it marries perfectly with this low, white marble city, and the gigantic sky that hovers over it. The sky is an unspoken hallmark of Washington. The city’s intentional avoidance of vertical growth means that photos of DC always have that sweeping sky. My images focus on the city itself, and not its people. I avoid human connection to emphasize the singular pursuit of power and influence that often merge the inhabitants of this powerful city with the institutions they embody, which seems to turn them into into the marble and concrete of the city itself. So, I photograph them as if they were carved of it and not flesh and blood.”

“White marble, deep sky, clean, architectural edges, and a kind of impersonal, invisible shell around the people of DC come together to form these somewhat fantastic and intentionally grand images that feel somehow futuristic and a little nostalgic at the same time.”

You can see more of Scot’s Surreal D.C. here

Never Thought Of Snails As Pretty Until I Saw These.