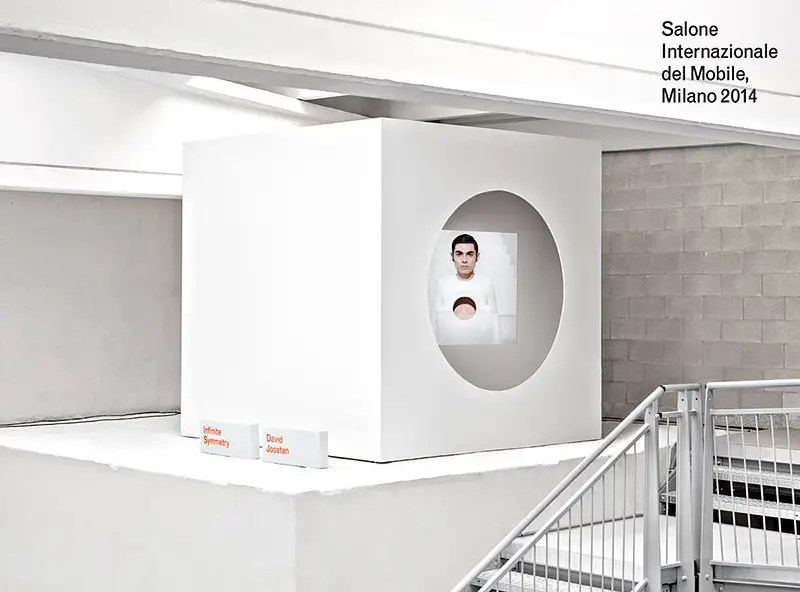 The first, Infinite Symmetry (2012), was Joosten’s graduate project for the Photography department of the Royal Academy of Art. This video installation is the point of departure in a search for perfection deriving from Joosten’s fascination with the untouchable qualities of a symmetrical face, posture, movement and rhythm. He was inspired by the mathematical exactness of DaVinci’s Vetruvian Man. Symmetry and beauty take center stage in this installation.

The sequel, Vanishing Point (2014), shows a darker and more oppressive image: perfection can also be destructive and ask for sacrifices. The unending loops in Inifite Symmetry give way to the infinity of the vanishing point in the following four moving symmetrical portraits. By navigating the borders of photography and film David Joosten makes moving photographs that have no beginning or end.

About the artist:
David Joosten, Amsterdam, The Netherlands
David Joosten recently graduated from the Royal Academy of Art in The Hague. He works with a variety of media like photography, film and animation. His style is best described as having a strong graphic aesthetic. He is always looking for the perfect balance, composition, movement and sound in a movie or moving picture. He transforms reality through physical and digitally created set design and by this creating his own world and reality.

His work was shown in GEM Museum of Contemporary Art in The Hague, Pien Rademakers Gallery and during Dutch Design Week. He worked for clients such as Pauw, Supertrash, Cora Kemperman, Expresso Fashion, Red Magazine and Scapa Sports.

all images and information courtesy of David Joosten and Unit

A Big Loss To the Creative Community: Nagi Noda and A Look at Her Work.