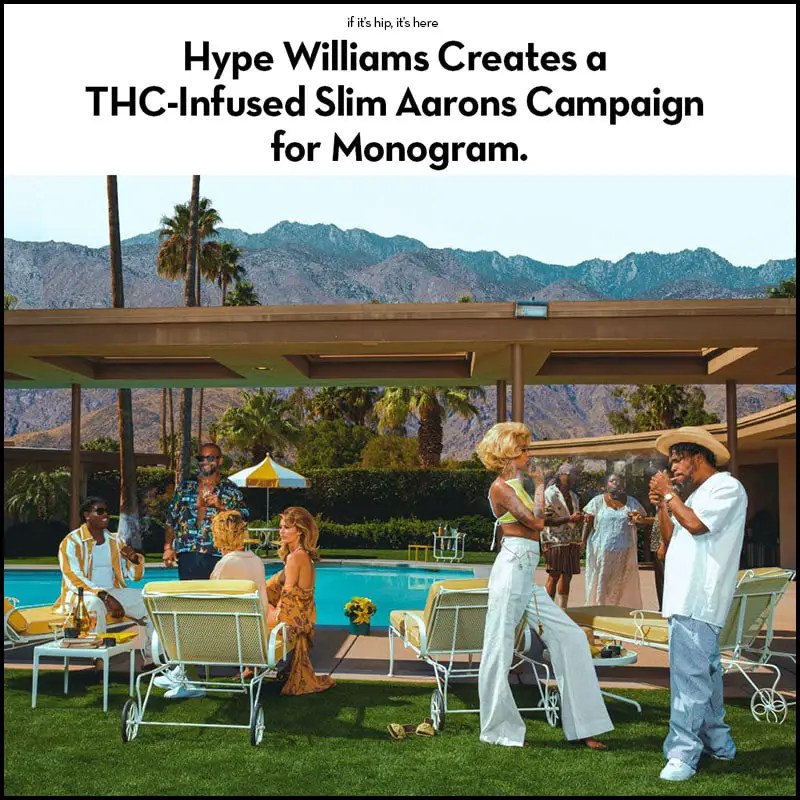 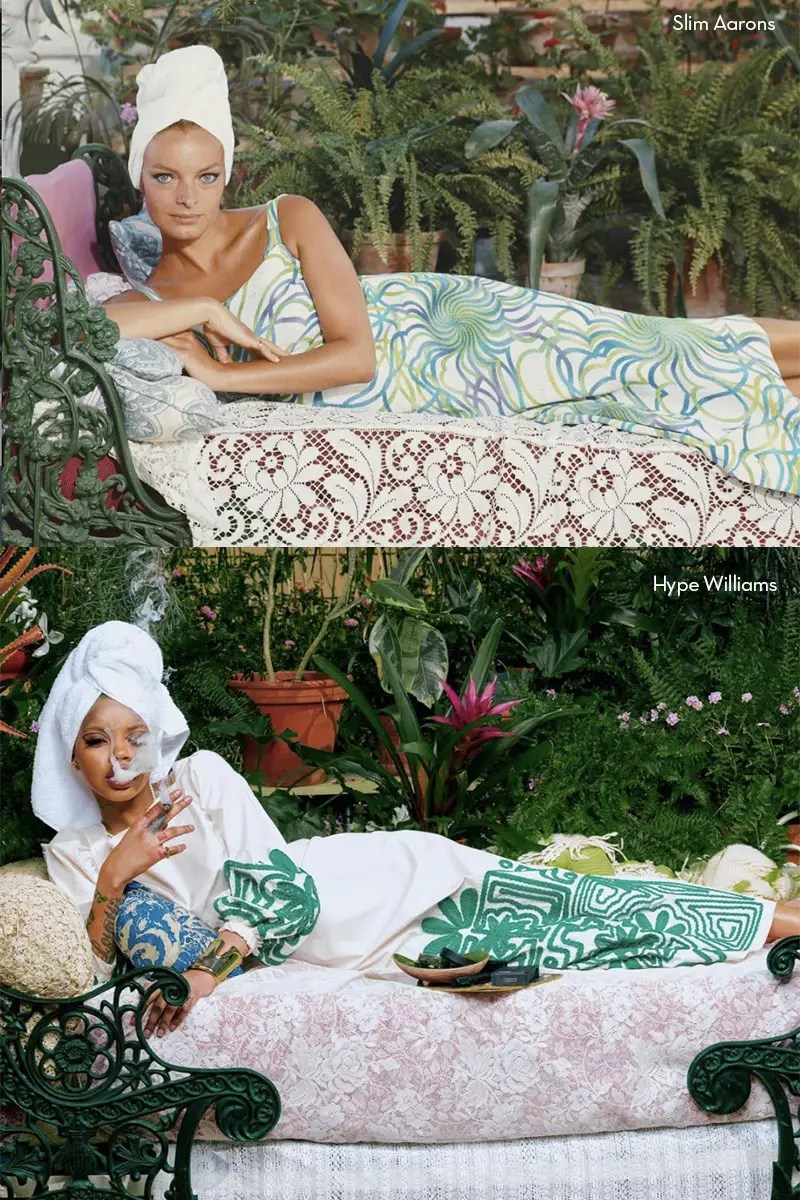 MONOGRAM is one of the many cannabis brands under global icon and business mogul Jay-Z’s The Parent Company.*  For their latest ad campaign they hired music video director, film director, producer, screenwriter and photographer Hype Williams to re-imagine some of Slim Aaron’s most famous photos so they would reflect today’s depiction of the good life.

Even if you don’t know Slim Aaron’s work by name, you’d recognize his oft-published pics of Mid-century poolside cocktail parties in Palm Springs and luxurious poolside vignettes from exotic locales. Born George Allen Aarons, he was an American photographer noted for photographing socialites, jet-setters and celebrities poolside. His photographs have appeared in countless magazines, including Town & Country, Life, Harper’s Bazaar, Vogue, and Travel & Leisure. Prints of his work are sold in galleries worldwide and books of his work look great on the coffee table.

But those were taken four decades ago. Things have since changed and in Williams’ recreation the good life in 2021 is a more heterogeneous affair, with a more diverse cast of characters. A little ink, a little more skin and a lot less White.

In his photos, the depiction of modern success and prosperity include cannabis and streetwear. And they look great.

“The perception around cannabis has shifted a lot since the 20th century. If you were to ask me and my peers how we’d define the good life today, weed would definitely be a part of it. Whether we’re smoking to inspire creativity or to celebrate an achievement, cannabis has a rightful place in modern day culture,” said Williams. “HOV has a vision for the industry that he’s bringing to life through MONOGRAM. His focus for this campaign was to showcase how beautifully cannabis fits into the good life today, and I am honored to be a part of it.”

Below, we’ve stacked Aaron’s original photos above Hype Williams’ so you can compare for yourself. Note that the bubbly from the 50’s has been swapped for Jay-Z’s own brand of Champagne, Armand de Brignac, also known as “Ace of Spades” and now co-owned with LVMH. 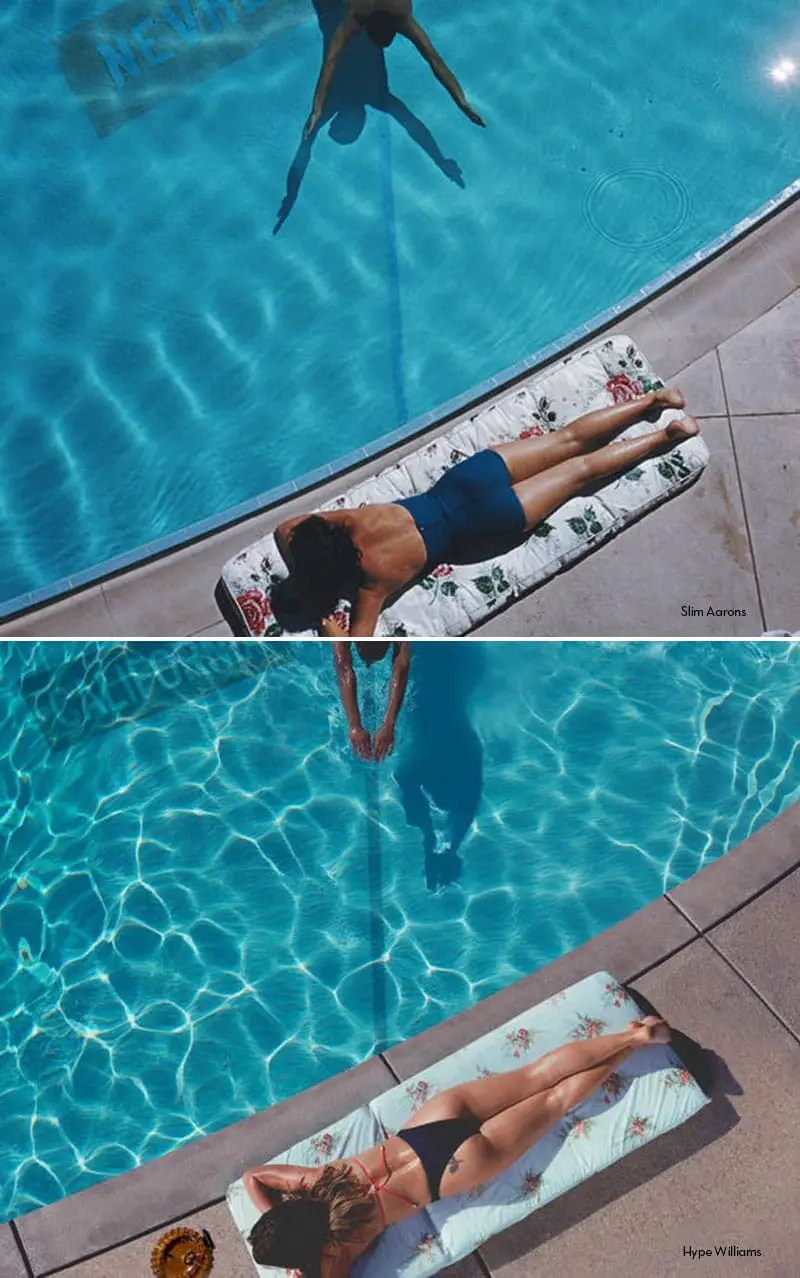 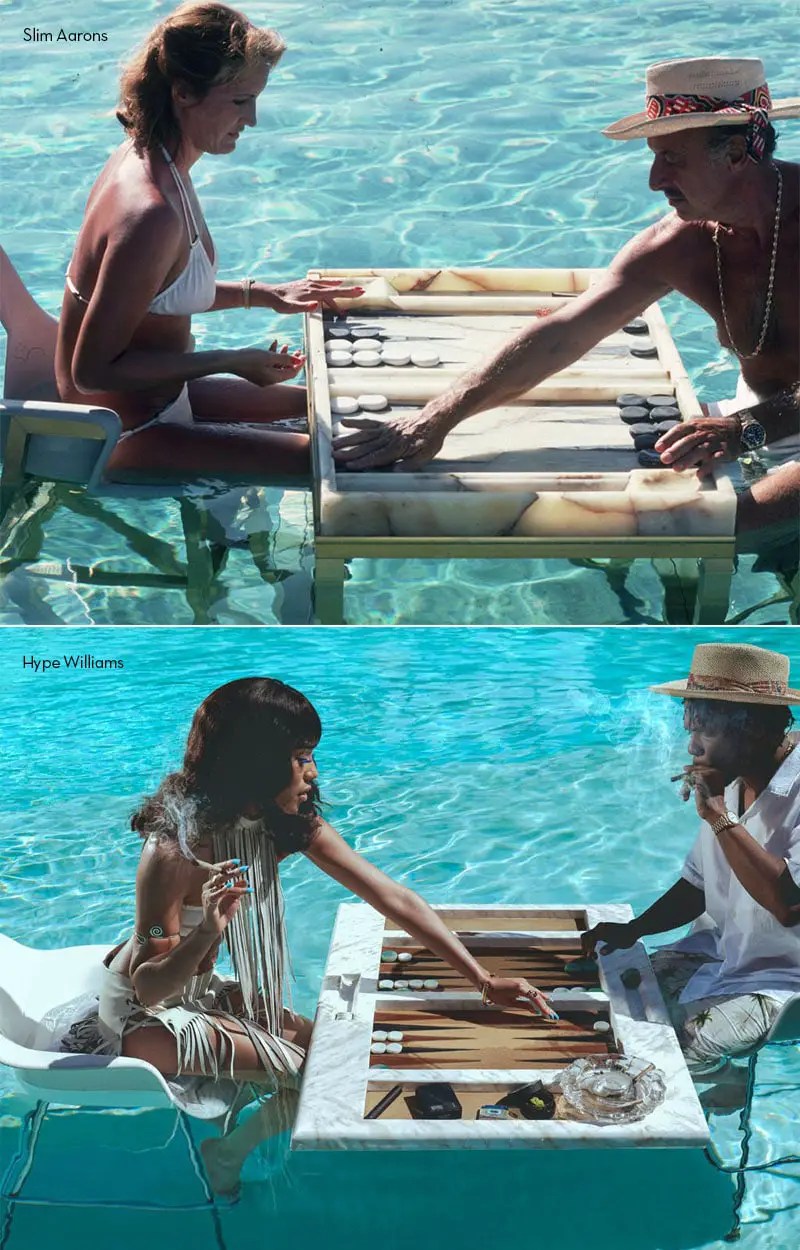 “This is an incredible time for this industry,” said MONOGRAM founder, Jay-Z. “The end of cannabis prohibition is here, and The Parent Company will lead the charge to a more expansive and inclusive cannabis industry. We are paving a path forward for a legacy rooted in dignity, justice, care, and consistency. The brands we build will redefine growth, social impact, and social equity. This is our time. I’m proud and excited to lead the vision of The Parent Company.”

images and information courtesy of Caliva