These wild ‘human motorcycles’ are the talented creations of body artist Trina Merry. One, the Red Ducati, was a commission for a Japanese entertainment show, the other three – a sport bike, dirt bike and a cruiser- were created for a promotional ad campaign. Here’s a look at the mind-blowing work , photos taken during the shoot and a behind the scenes video.

The Red Ducati: This commission for “Itte Q” on the Japanese tv station Nippon TV aired in 2014 and was made of 6 people and body paint. The front “windshield” model is Japanese celebrity Nana Suzuki, who Merry says “was an adorable joy to work with and paint!” A Sport Bike, A Dirt Bike and a Cruiser

In the six images shown below, commissioned to promote the International Motorcycle Show (US Tour- November 2012-Februrary 2013), Trina created a dirt bike, a sport bike, and a cruiser. Other than the gloves, boots and helmets, the illusion of body leathers, clothing and bike parts are all done with body paint. 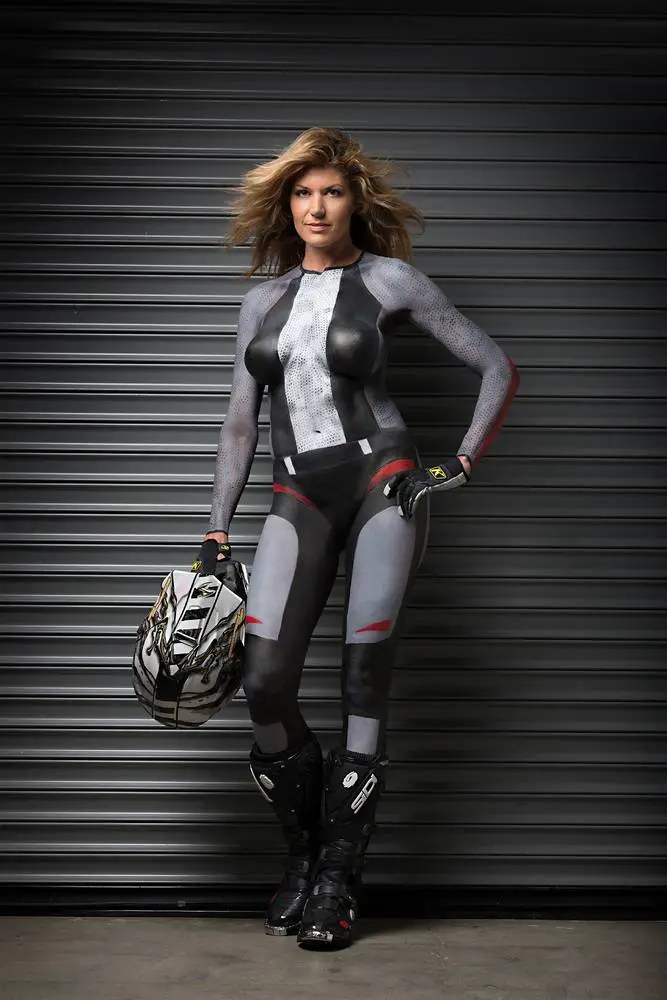 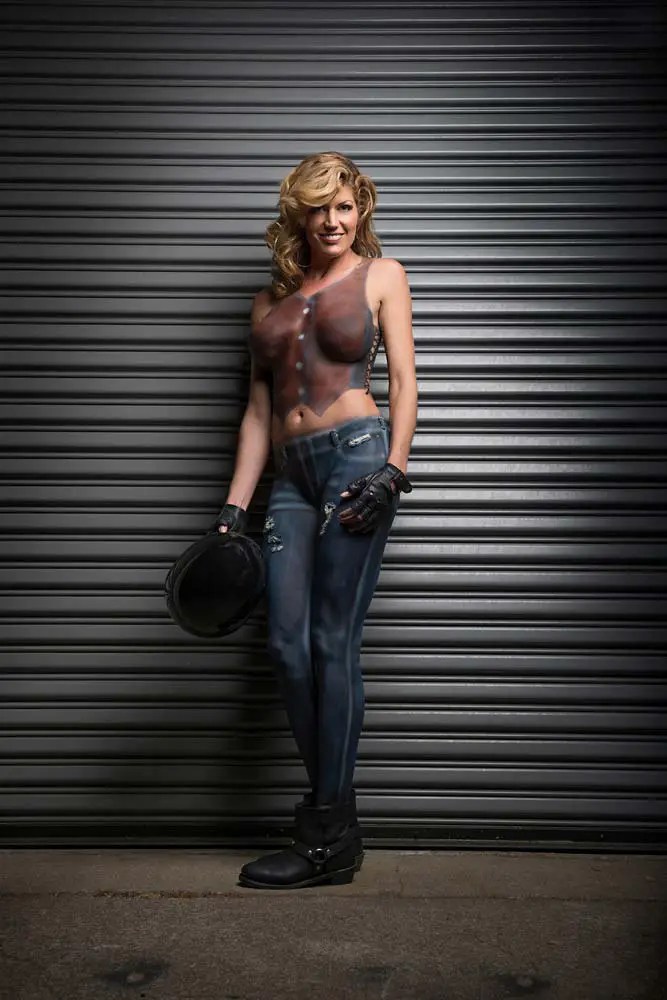 Photos from “Behind The Scenes” at the shoot: 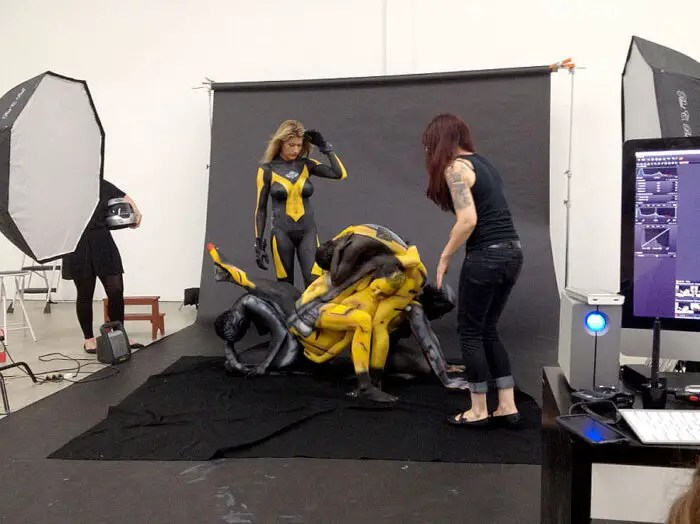 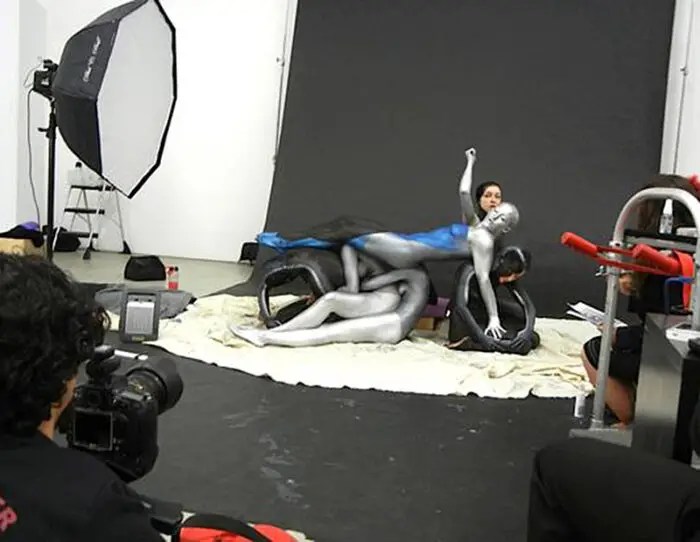 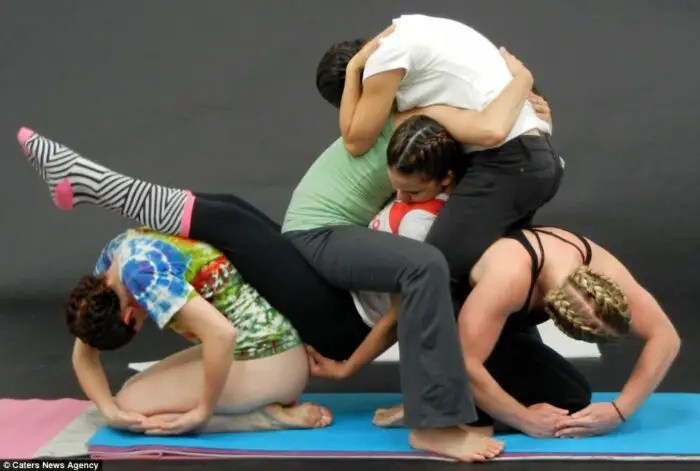 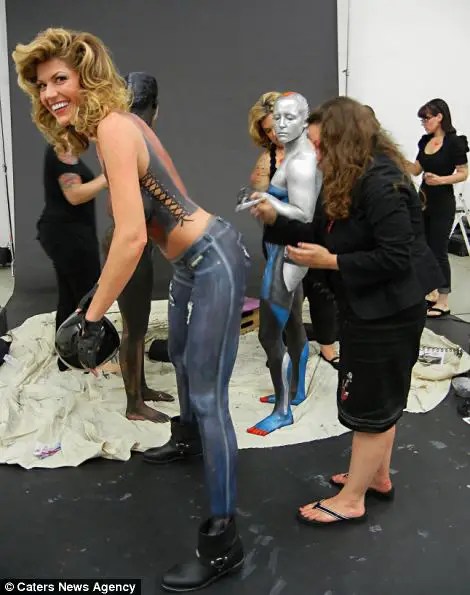 This “making of” video was shot over the course of 3 days and captures the process of bringing human motorcycles to life for the International Motorcycle Show. Trina Merry creates unique mind-blowing body art that has been featured in every major media outlet including TIME Magazine, The NY Times, NBC, ABC, The NY Post, Forbes Magazine and the Discovery Channel. The scope of her work ranges from avante garde performance pieces in museums to commercial advertising campaigns.

A Native of the Bay Area with a degree in film, she moved to New Orleans to apprentice under the world renowned body artist, and current judge on Skin Wars, Craig Tracy. She currently lives in New York City where she studied under Robert Wilson at the Watermill Center.

“Painting on the body creates a special connection to a person that other visual art forms have trouble accomplishing; it’s a distinctly human experience.” -Trina Merry

Highlights of her career include creating 10 commercial and fine art series that have gone viral, crafting living installations at the San Jose Museum of Art and ESMoA, executing a social media campaign for Ford Motors Corporation & a national commercial for NERF, and receiving numerous industry awards. She currently holds the title of “World Champion” in the Fine Art Bodypaint Installation Category.

You can purchase prints of Tina’s work here.

Trina Merry’s work is stunning. See more of it at her official site here

photos for this post courtesy of Trina Merry, Jam Photos and the Caters News Agency

Films of The Coen Brothers Honored by 50 Artists

The Artist Whose Minimalist Trump Became A World Icon