` HefeWheaties Craft Beer - If It's Hip, It's Here
Skip to content 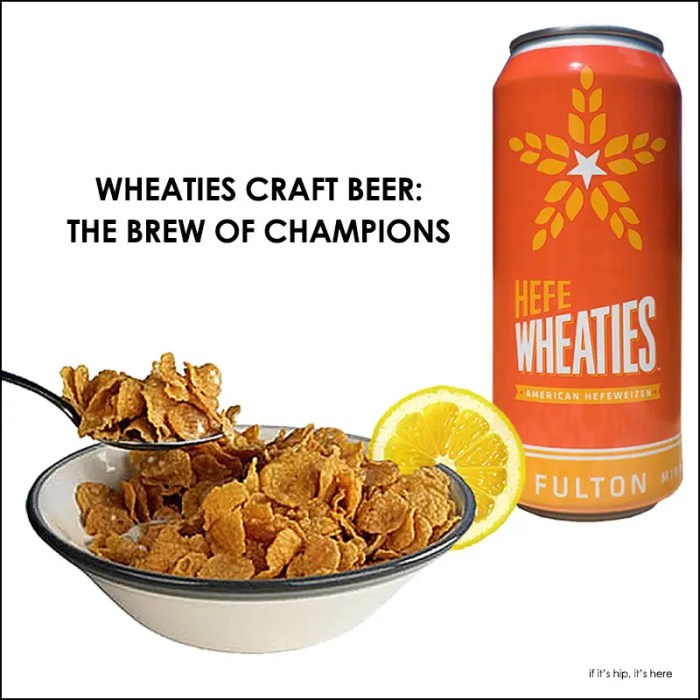 And in bizarre breaking news, General Mills’ Wheaties, long known as the Breakfast of Champions, has partnered with Minneapolis-based craft brewery Fulton, to launch a limited-edition Hefeweizen beer named HefeWheaties. Wheaties is not actually in the beer, but there is wheat. And that connection helped both brands try something interesting.

“We were intrigued from the get-go on this idea for many reasons, including that we’re both Minneapolis companies, and that the beer and the cereal both started from the same place in terms of raw ingredients and the same city,” says Ryan Petz, president and co-founder of Fulton.

So what about the name?

“We had been sampling a number of Hefeweizens, so we had been discussing with the Wheaties team what we liked,” says Petz. “Someone on the team said HefeWheaties, and it kind of sprung out from there.”

The Hefeweizen is a south German style of wheat beer, typically brewed with over 50 percent malted wheat, making it a natural fit for Wheaties.

The “Hefe” prefix means, “with yeast.” This German-style beer often has a cloudy appearance because of the high wheat content and has a little bit of hop bitterness.

Typically served in a traditional Weizen glass, HefeWheaties will be the first beer of this style brewed by Fulton. It’s brewed with water, malted wheat, malted barley, hops from Germany, the U.S. and Australia, and a yeast strain specifically developed for fermenting American-style wheat beers. “This was a true partnership between Wheaties and Fulton,” says David Oehler, marketing manager, Wheaties. “Both teams were passionate about this project and got to work quickly. We enjoyed the chance to collaborate with Fulton throughout the entire process from idea generation to can design.”

The idea for HefeWheaties came up earlier this summer, thanks to some connections between Fulton’s team and employees at General Mills.

Tony Libera, who manages the social media accounts for Wheaties, chatted about the possibility of a beer partnership for the brand with a friend who was a sales representative for Fulton, and the plans were put in motion from there.

The Fulton team also has other close ties to General Mills. Petz worked for us for a few years after business school, as did Fulton’s director of operations. And the wife of another Fulton founder currently works at General Mills.

So where can you find HefeWheaties?

For a limited time, beginning August 26, it will be available in the Twin Cities market in a 16oz. tallboy can. 4-packs will be sold at limited retailers in the area, while quantities last. HefeWheaties will not be available for shipment or purchase outside of Minnesota. Also, the Fulton taproom in Minneapolis will host several events featuring HefeWheaties, with the first being held on August 26.

“We’ll see how people react to it,” says Petz. “If it’s something everybody loves, we’ll obviously consider doing it again in a bigger and more widely distributed way in the future.”

Information and images courtesy of General Mills, and Fulton