Who doesn’t love Betty White? The six-time Emmy winner has been working in show business consistently for more than 75 years, and hers is the longest television career of any female entertainer in history. And today she turns 96. Happy 96th Birthday Betty White!

The self-professed animal lover who also has a fondness for Vodka, Hot Dogs and Robert Redford, recently shared her legacy, memories and recipe for a long happy life in an interview with Parade Magazine.

Her two signature sitcom roles – as Sua Ann Nivens (for which she won 2 Emmys) on the Mary Tyler Moore show and as Rose Nyland (for which she also won an Emmy) on the now cult favorite Golden Girls, have made her a household name among young and old.

Betty’s character on Golden Girls has not only been immortalized through syndication, but also in books, board games, coloring books and Funko vinyl figurines.

Betty had one great love of her life, game show host Allen Ludden, whom she met as a regular guest on the hit game show Password from 1961 to 1975. They were married for 19 years—“Not long enough,” she says—before Ludden’s death from stomach cancer in 1981.

In the interview with Parade Magazine, they printed the following timeline of her most notable work:

1939 White begins her TV career by singing on an “experimental” Los Angeles station.
1940s–1951 Works on various radio shows before landing a live daily co-hosting spot on Hollywood on Television, which earns her an Emmy nomination.
1952 Founds production company and creates the TV series Life With Elizabeth, which runs in syndication from 1953 to 1955.
1954 Hosts her own daily talk show, The Betty White Show, on NBC.
1956 Begins 19-year run as host and commentator of Tournament of Roses Parade.
1962 Makes film acting debut in Advise & Consent.
1973 Begins guest appearances on The Mary Tyler Moore Show as Sue Ann Nivens, leading to two Emmys.
1983 Becomes first woman to win a Daytime Emmy for Outstanding Game Show Host, for Just Men!
1985 Lands Emmy-winning role as Rose Nylund on The Golden Girls.
2005–2008 Begins role on Boston Legal. Joins cast of the soap opera The Bold and the Beautiful.
2010 Featured in memorable TV commercials for Snickers. Becomes—at age 88—the oldest person ever to host Saturday Night Live, which earns her another Emmy. Takes role in TV Land’s Hot in Cleveland.
2011 Stars in the Hallmark Hall of Fame movie The Lost Valentine and receives the Jack Benny Award for contributions to television comedy.
2012 Executive produces and hosts the senior citizen hidden-camera prank series Betty White’s Off Their Rockers. Receives first Grammy, for her spoken-word recording If You Ask Me (And of Course You Won’t). 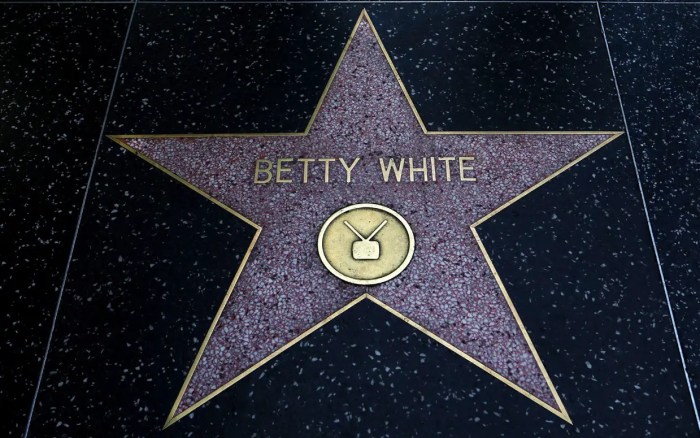 We wish her a wonderful 96th Birthday and many more!

Which Of These Five Ads Would Get You To Wear A Mask?

Iconic Oscar Dresses Worn By Actresses Through The Decades, New for 2015.