` Haagen Dazs Designer Christmas Cakes - If It's Hip, It's Here
Skip to content

Move over Gingerbread, here’s another Christmas confection to impress. Not many in the U.S. know that ice cream brand Häagen Dazs commissioned well-known interior, industrial and traditional designers, one for each eleven years from 2008-2019, to create uniquely beautiful and delicious Christmas ice cream cakes for the annual Häagen-Dazs Ice Show in France and for sale in France, Belgium, Amsterdam, London and Japan at the holidays.

A few years back, we shared with you the desserts that had been created to date. Now we have images and information about all of the ice cream cakes commissioned by Haagen Dazs that make up an impressive archive of edible designs. 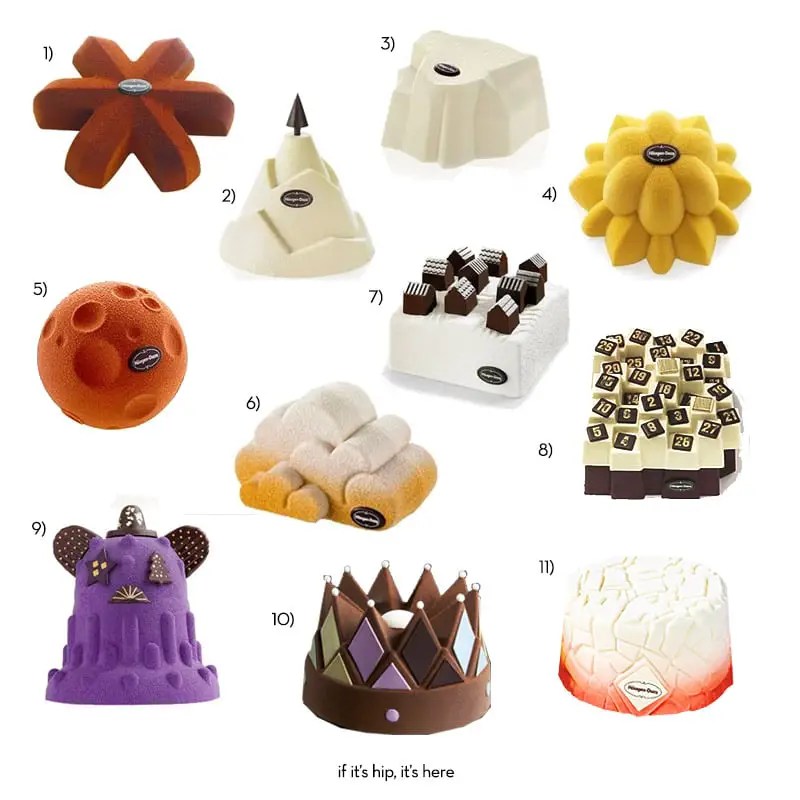 The annual Christmas cakes were each created by well-known designers from all over the world,  many about whom we have blogged before.

The very first for the premiere event in 2008, designer Patrick Jouin created a Snowflake-shaped cake in vanilla and chocolate. Unfortunately we cannot find the interior ingredients or much information on this one, given it was the first. 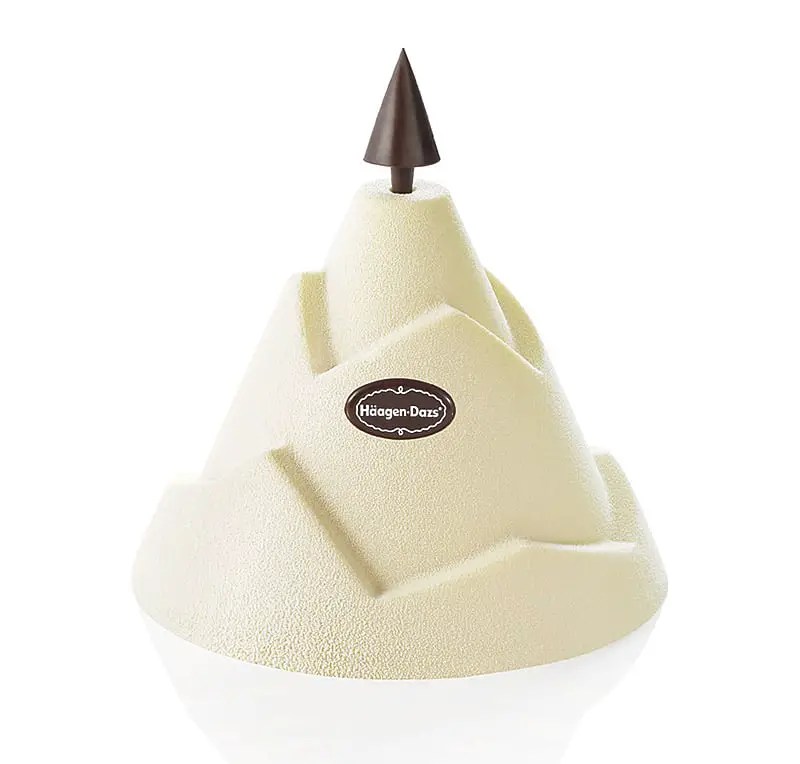 This refined mountain was made of Speculoos Caramel Biscuit & Cream and Macadamia Nut Britt ice creams; white chocolate powder, a crispy base and topped with a dark chocolate tree. 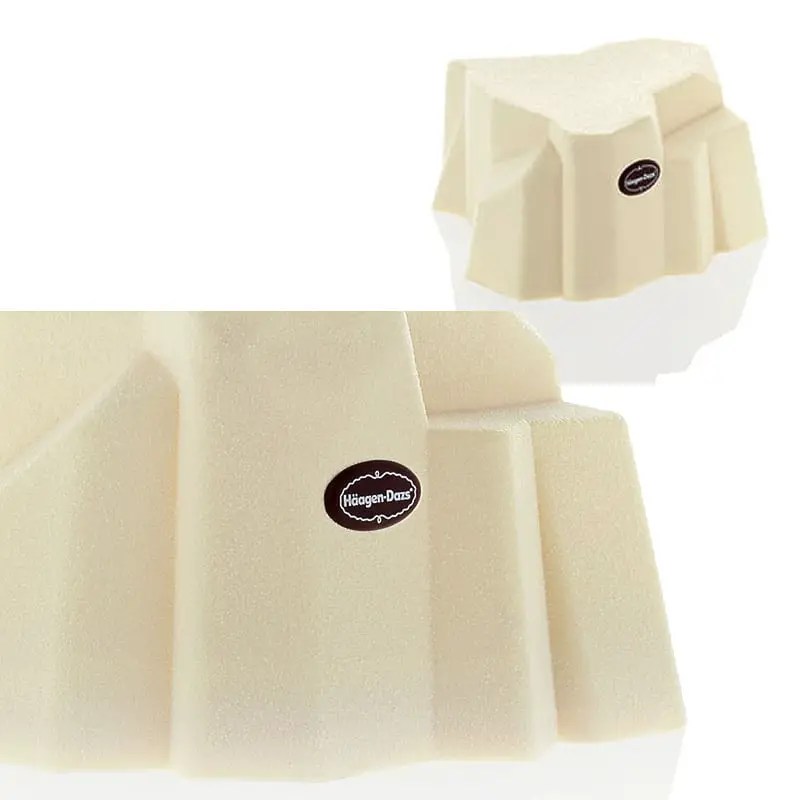 in 2010, 5.5 Designers Created an Iceberg ice cream Christmas cake as a comment on Global Warming for Haagen Dazs. The creamy cake was made from natural vanilla flavors and has a textured appearance. 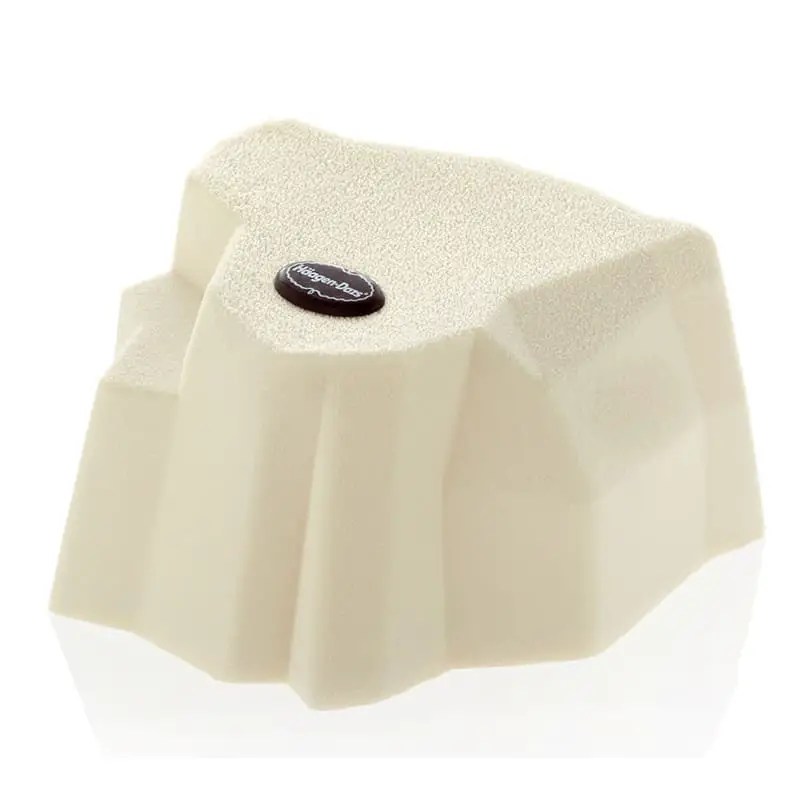 The two Flower ice cream Christmas cakes by Kiki Van Eijk were created in two flavors chosen for their popularity in France: the sun-yellow ice cream flower cake is made with macadamia nut brittle ice cream and mango sorbet, on a bed of hazelnut biscuit with a heart of passion fruit coulis and the white ice cream flower cake has caramel biscuit and cream, biscuits and vanilla ice cream, with a creamy caramel center laid on a bed of crunchy praline. 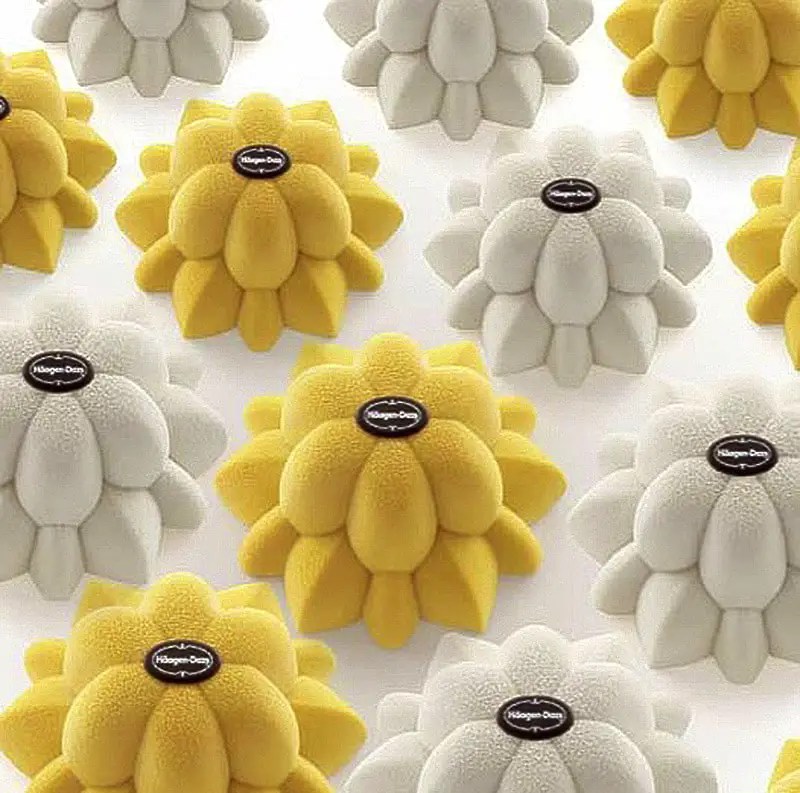 Designers Nina Doshi and Jonathan Levien made little lunar cakes for Haagen Dazs. Spherical moons embellished with craters. The white moon cake is made of a pistachio biscuit base, layers of macadamia nut ice cream and meringue and a coating of raspberry ice cream. The orange moon cake has crunchy chocolate at the bottom, layers of nutty ice cream and salted caramel and a coating of vanilla ice cream.

Sweden’s Front Design group made Christmas cakes were in the form of clouds, Dawn and Dusk respectively, for Haagen Dasz in 2013. The flavor of the red dawn cloud is champagne truffle with Belgian chocolate while the dusk orange cloud incorporates Haagen-Dazs’ well-known flavours, dulce de leche and cookies and cream. Japan’s Nendo created two little Villages for Haagen Dazs that were designed to connect to one another to create a village. 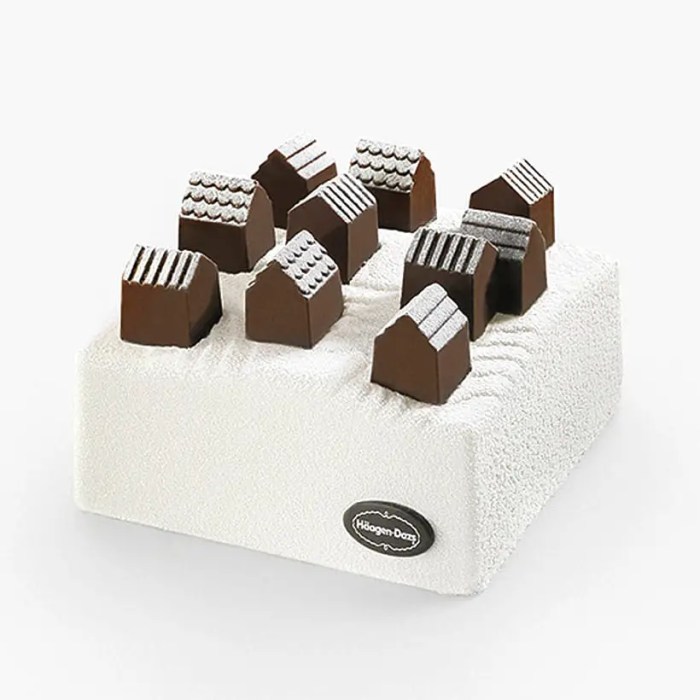 Chocolate Village: Two of France’s best sellers – Dulce de Leche and Macadamia Nut Brittle ice creams – are separated by a salted caramel sauce with roasted almonds. The ice cream sits on a crunchy “Dacquoise” praline biscuit and is topped with houses made of milk chocolate and filled with chocolate fudge sauce and caramelized hazelnuts. Pink Village: A base of vanilla and winter-limited edition Vanilla & Florentine ice creams sit on a biscuit of dried fruits and almonds. An orange and caramel sauce separates the ice cream, which is topped with pink houses made of white chocolate and filled with chocolate fudge sauce and caramelized hazelnuts. 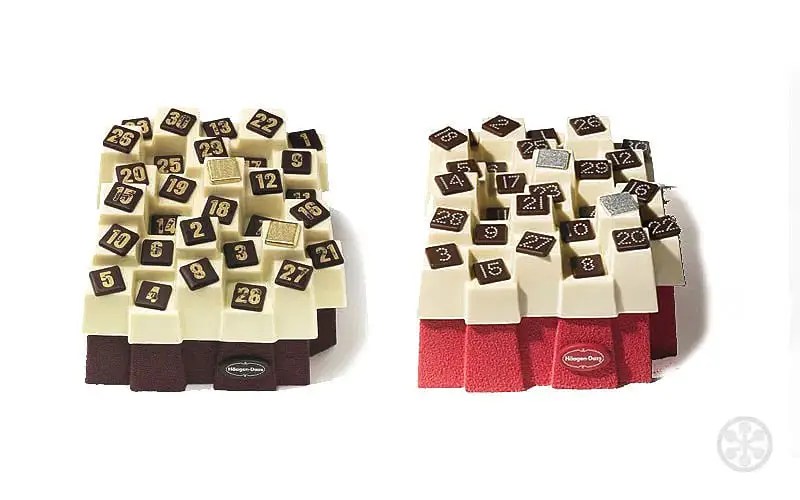 In 2015 designer Paola Navone created ice cream Advent Calendar Christmas cakes for the brand. There are two varieties of the calendar cake available: dark chocolate and almond with a brown exterior, and macadamia nut brittle. 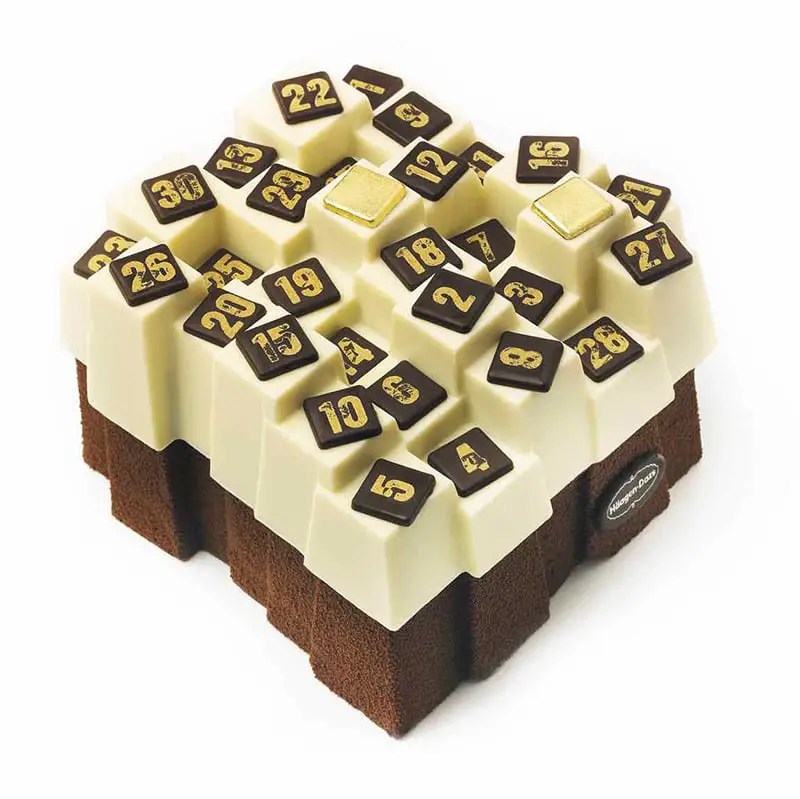 The second cake is Dulce de Leche with a red exterior. Both cakes have crispy bases made from puffed rice and are topped with a white chocolate shell. The white cake creature is built on a crunchy speculoos biscuit base and is topped with a delicious combination of two of the brand’s best-selling ice creams, salted caramel and vanilla. To enhance these ice creams, the pastry chef added indulgent ingredients like salted caramel sauce, roasted almonds and hazelnut praline. 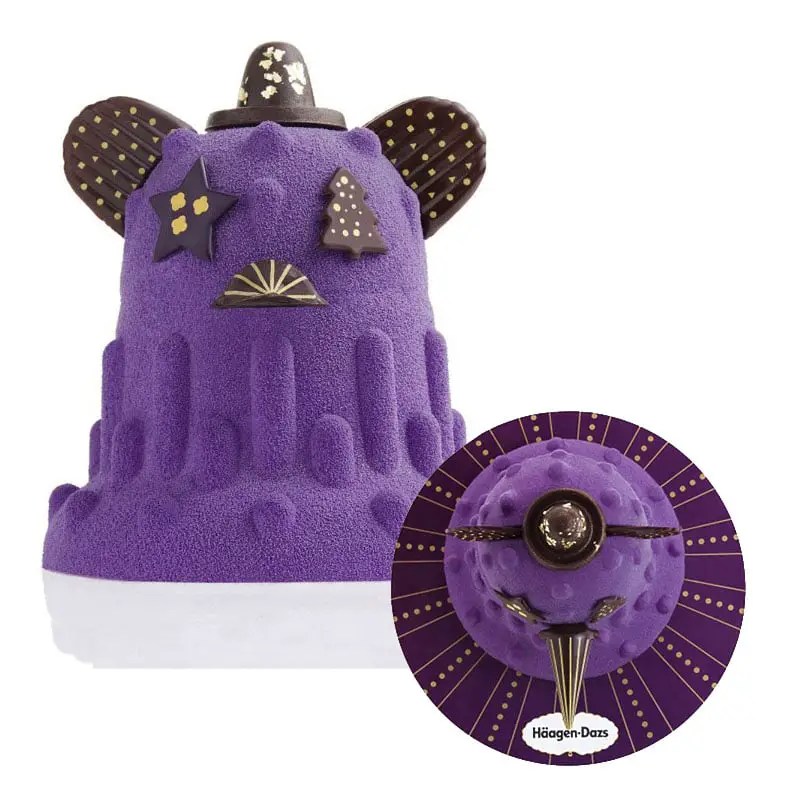 Behind the pointed chocolate nose on the purple cake is a delicate blend of Häagen-Dazs’ new Almond & Cream and Honey Walnut & Cream ice creams, lying on an almond and orange blossom biscuit base. Thin layers of salted caramel sauce with roasted almonds and an exotic coulis centre add extra-indulgence. 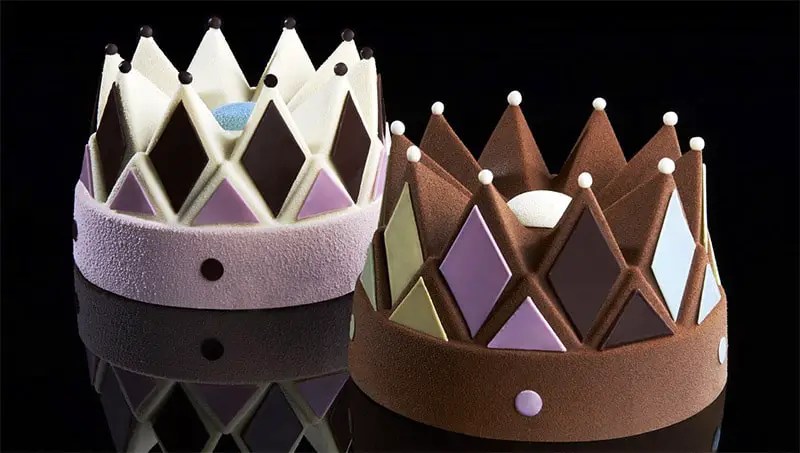 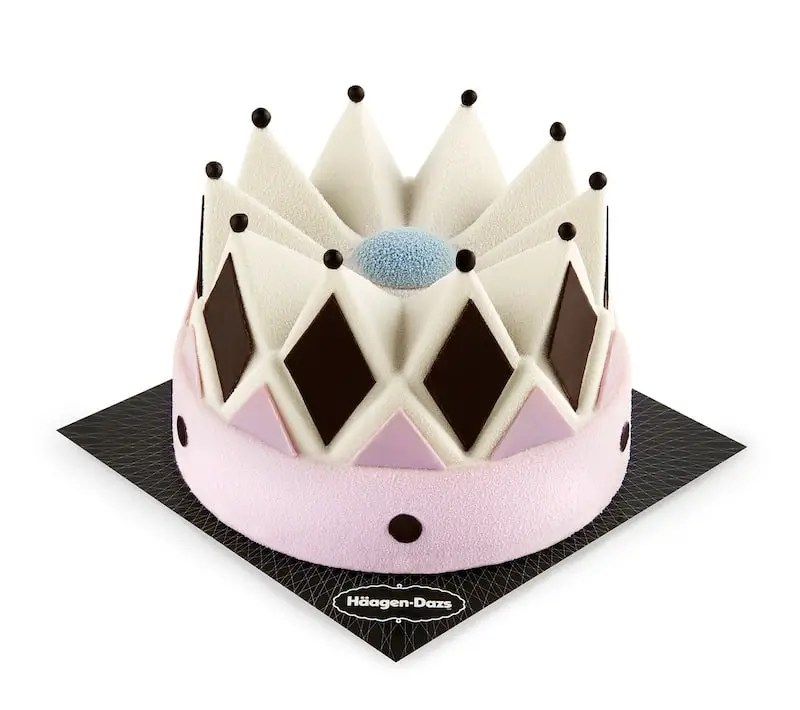 The “Original” white cake features mango sorbet and a smooth vanilla ice cream on a speculoos dacquoise biscuit. A chocolate cream is enhanced by a dash of sourness brought by a mandarin compote hidden in the middle of the crown. Brazilian design duo, the Campana Brothers, created “The Precious Delight” for Haagen Dazs as the final Chrstmas Cake design. The holiday cakes come in Belgian Chocolate & Vanilla and Frozen Yogurt & Raspberry Sorbet flavors with a faceted design as complex as a gem. 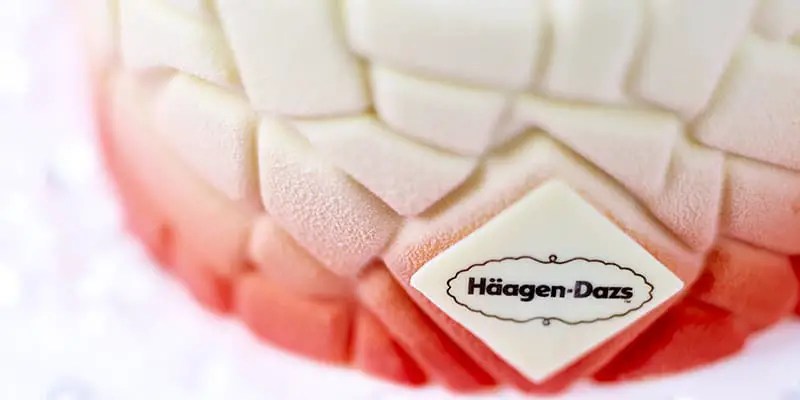 The “iconic” recipe is described as a soft brownie studded with delicious crispy pieces, paired with two iconic ice creams: Belgian Chocolate & Vanilla. The two premium flavors are taken to new heights by the texture of a praline iced mousse and given a twist of originality with a mango and passionfruit confit. 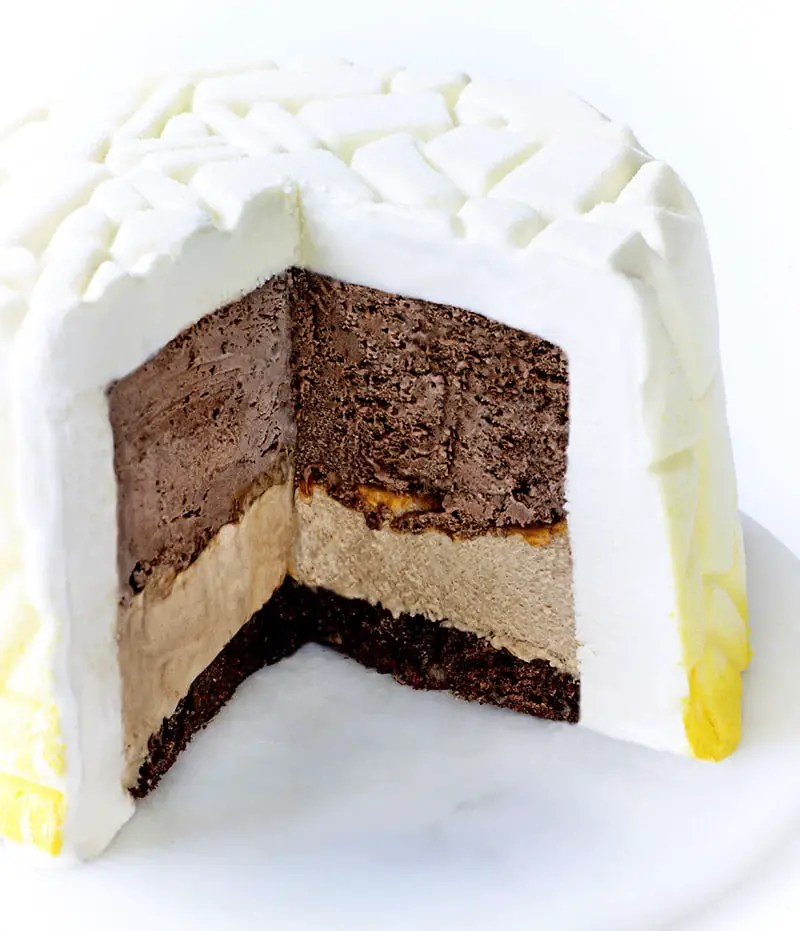 The “original” recipe of a delicious crunchy biscuit spiced with ginger and cinnamon is elevated by refreshing Frozen Yogurt and Raspberry Sorbet which give it a real light touch. This creation whisks you away to another world and its vibrant surprise center is bursting with a delicate jasmine cream lifted by a berry confit.

Thanks to the General Mills Blog for the detailed ingredients.

The Story of Seinfeld’s Festivus and 20+ Festivus-Related Products.