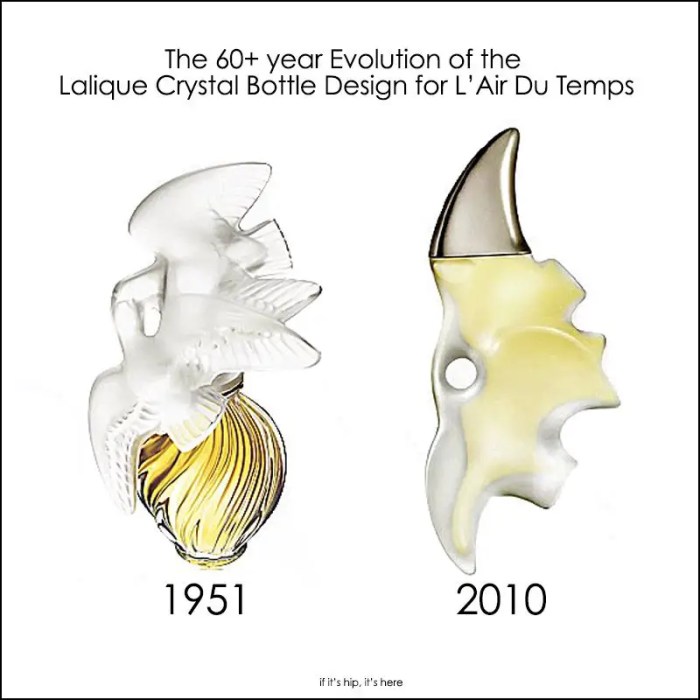 The design of the bottle for one of the most popular and enduring scents continues to evolve. It was announced a few days ago that the classic Nina Ricci perfume bottle for the L’Air du Temps

fragrance spray has been redesigned by omnipresent designer Philippe Starck as a special limited edition.

All The L’Air Du Temps Bottles Since 1948

This is not the first time the L’Air du Temps flacon has been redesigned. The original bottle design introduced in 1948, was made to emulate a sunburst and had a frosted glass insert in the top. Only 3 years later Robert Ricci had Rene Lalique of Lalique crystal design a bottle that has since become a classic. Numerous iterations of dove-topped bottles have appeared since then, culminating in the newest modern version by Philippe Starck.

Below are all the bottles produced for the fragrance, in chronological order In 1951 Lalique crystal created the now iconic bottle with the two frosted doves atop the swirled clear crystal flacon. And most recently designer Philippe Starck has taken the symbolic two doves and abstracted them for the newest limited edition of the perfume and topped one of the wings with a silver cap.

The newest bottle called L’Air du Temps by Starck will be available as a 45ml spray launching in October 2010. This limited edition is reported to cost 69 EUR ($89). 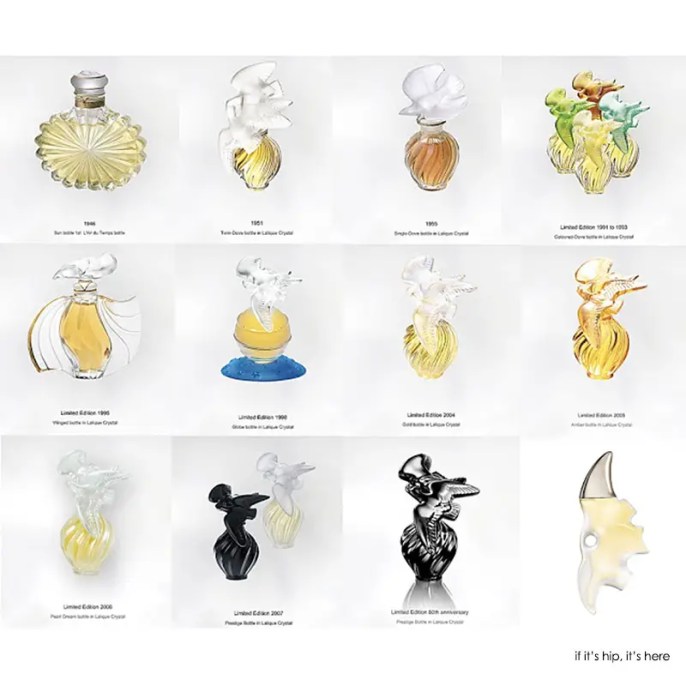 The icon fragrance from the Nina Ricci house was born in a creative and joyful spirit in 1948. The perfect harmony of an enchanting elixir, the symbol of femininity and eternal youth. the emblematic values of L’Air du Temps remain universal: Peace, Purity, Freedom and Love. L’Air du Temps is also the air that we breathe, the mood of the moment, the reflection of each era. L’Air du Temps… An unequalled moment of emotion.

Fragrance : Spicy Floral
This fresh and timeless fragrance is a unique combination of contrasts. The legendary accord of spicy carnation and gardenia is subtly tinged with rose and jasmine from Grasse and caressed with sandalwood and iris for even more sensuality. A fragrance of emotion, L’Air du Temps exudes a mysterious power of seduction. Its fragrance blends into the personality of each woman to bring out her sensual charm and refinement.