` Frank van Brunschot Collector's Cabinet - If It's Hip, It's Here
Skip to content Frank van Brunschot is a custom woodworker and antique furniture restorer in Brisbane, Australia. He’s been crafting with wood since the young age of 14 when he began a cabinetmaking apprenticeship in Toowoomba (a city in Queensland) working for Hagan Furniture. In 2005 he set up his first Australia-based workshop and has been churning out beautiful pieces of furniture ever since.

One of his most exceptional pieces is his Collector’s Cabinet with its 5 cabinets, 45 drawers, 250 dovetails and lathe turned legs. 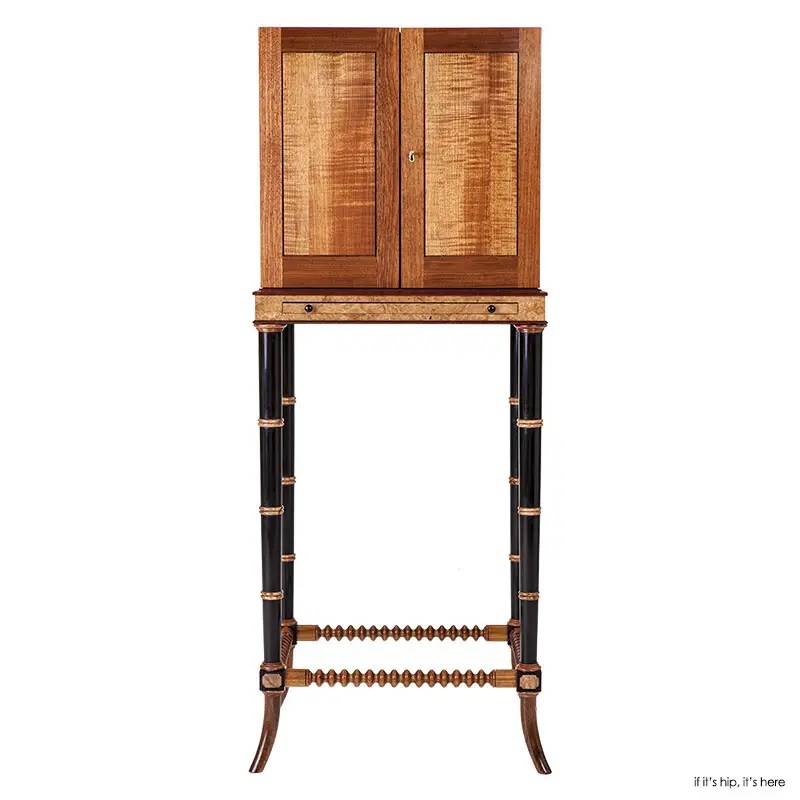 Brunschot explained his inspiration and process to Australian Wood Review :
“I made this piece for the Maleny Expo Wootha Prize competition* which that year had the theme of ‘open and shut’. The idea of having to use exclusively Australian timbers appealed to me. An old Edwardian Australian blackwood sideboard (circa 1910) was given to me by a customer in exchange for some restoration work. It was an imposing piece, stylistically very heavy, and probably for that reason it had been unsaleable. Although damaged, it had panels of beautifully figured blackwood that I couldn’t miss the chance to get my hands onto.

All my working life I have been involved in antique furniture restoration, reproductions and one-off custom made pieces. My work with antiques has strongly influenced my furniture making. While many of the commissions I have undertaken have been contemporary in style, when I have the chance to make a speculative piece I intuitively draw on the rich and varied history of furniture. 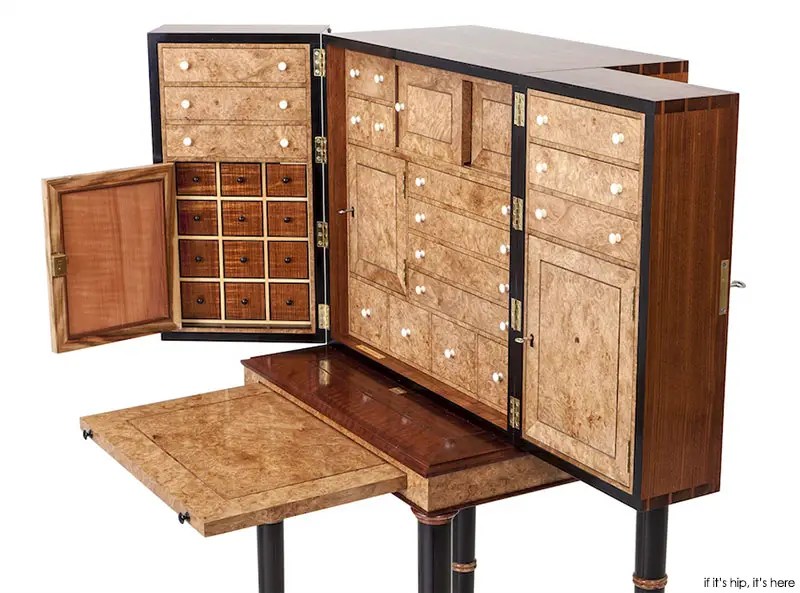 The cabinet on stand with its countless variations has been around for hundreds of years. Dutch and Flemish pieces of the 17th and 18th century were extremely elaborate, veneered with exotic timbers, tortoise shell and ebony, and had ormolu mounts. A modern re-interpretation of this style are the simple and elegant designs of James Krenov.

My interest in this type of cabinet came from working on 18th and 19th century collector’s cabinets that were made to store natural history specimens. Examples are Lachlan Macquarie’s collector’s chest circa 1818, and a cabinet made by apprentice cabinetmaker James Packer, signed and dated circa 18152.

Another influence for me is the Aesthetic Movement of the 1870s and 80s. The beauty of a piece was of primary importance, and there was a rejection of Victorian clutter. Naturalistic elements were combined with classical Greek, Egyptian and Japanese styling to create a new eclectic style. Black japanned or ebonised finishes along with richly coloured light and dark timbers created a striking new look.

My cabinetmaking practice is derived from and influenced by traditional English furniture making. This type of joinery has well and truly stood the test of time. The top section of the cabinet is solid blackwood dovetailed together. Highly figured timber was saved for the panels. All the internal door and drawer faces are veneered with burl eucalypt onto a solid substrate. For the backing veneer a fruitwood was used (possibly apple or pear). Camphor wood, Huon pine and cedar for the drawer components give the cabinet a lovely scent when opened. A flat slide-out panel is positioned above the legs. The idea for this came from Georgian furniture in which chests of drawer and linen cabinets had slide-out panels on which clothes could be arranged and laid out. Small handles were turned from faux bone and blackwood that was then japanned. The small internal drawers behind the doors were veneered with figured blackwood to which contrasting black cockbeading and handles were added. The legs were turned from blackwood. The beaded rings around the legs were made from burl eucalypt then broken into two and glued into a turned recess on the leg. I found breaking the rings worked best, as cutting them removed material and distorted the shape. The legs were polished prior to assembly while still in the lathe. They were ebonised with iron and vinegar, a fairly common technique that works better on some timbers than others. Several coats of garnet shellac mixed with powdered black pigment (instead of the usual pumice) were then applied to fill the grain before rubbing back when dry. The whole cabinet was French polished with white shellac.

I am very pleased with the finished result. To me it represents and celebrates my eclectic interests in traditional arts and craft. There are elements of east and western style. The classical column type legs reference the formal grandeur of western art while the colour and asymmetry has a more eastern flavour.” 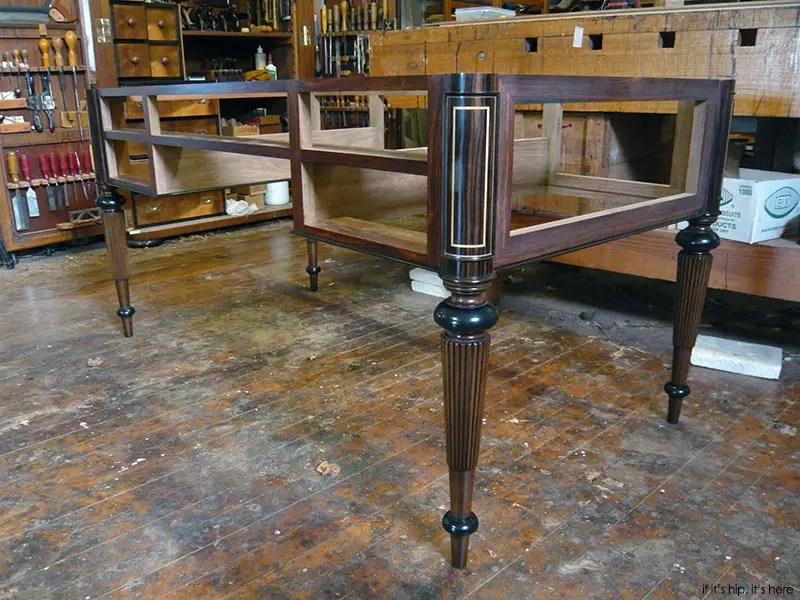 above: Another fine example of Frank’s work is this writing desk currently in progress. The desk is made out of Blackwood, ebony, Rosewood, tulipwood and Huon pine and boxwood inlays. Frank’s passion for woodwork started as a young child exploring his father’s workshop. Frank’s father is a post war migrant, coming from Holland to Australia to start a new life as a carpenter. At the age of 14 Frank commenced his cabinetmaking apprenticeship in Toowoomba (City in Queensland, Australia) working for Hagans Furniture which made furniture and restored antiques. Upon completion of his Cabinetmaking apprenticeship Frank worked in a range of different jobs gaining valuable experience. Frank has always had a keen interest in traditional Arts and crafts and during this time was informally studying Visual Arts, painting and drawing. In the year 2000 Frank began formal full time study at Australian National University and completed a Bachelor degree in fine arts (visual) with Honours 2004. In 2005 Frank returned to Brisbane where he began to gradually set up his own workshop. For many years Frank leased a small workshop in Geebung, Brisbane north. Frank is now set up in his own self built workshop located behind his home in Sandgate. Frank business services all areas of Brisbane, and includes pick-up and delivery.

Here you can take a look at some of his other custom pieces.

Thanks to Australian Wood Review for the interview

* The Wootha Prize is held in conjunction with the Maleny Expo held in Queensland each year.

And You Thought Roombas Were For Cleaning. Light Art Photography By Robotic Vacuums.

The Walking Dead Guitars & Accessories From Peavey With Artwork By Charlie Aldard.