` Frank Gehry Tower at LUMA Arles - If It's Hip, It's Here
Skip to content 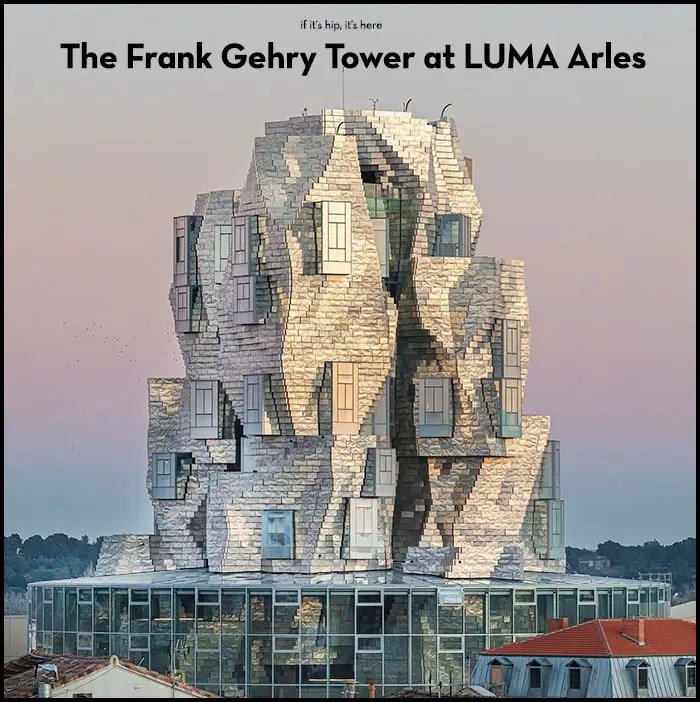 The highly anticipated, albeit controversial, Frank Gehry Tower at LUMA Arles made its public debut last month after 7 years of planning, development and construction. And Wow.

The new nine story twisting tower clad in 11,000 stainless steel panels which reflect the southern light in the city of Arles, can’t be missed. Visible for miles, the Frank Gehry Tower at LUMA Arles looks different from every angle, under different skies and at different times of the day and night.

In 2014 architect Frank Gehry was commissioned to design a new cultural building for LUMA Arles, a 27 acre interdisciplinary creative campus, located in Le Parc des Ateliers, a city in the South of France. The new Tower would house a 1,000-square-meter exhibition hall, two smaller exhibition halls, a cafe, an auditorium, library, artist studios and more.

The Tower began construction in 2016 and made its official public debut on June 26th, 2021.

Like the two aforementioned buildings, The Tower at LUMA Arles which reaches 180 feet, is also clad in shimmering metal. The reflective surface is made up of 11,000 stainless steel bricks and 53 glass boxes and catches the color variations in the sky, giving the building an ever-changing appearance.

This aesthetic choice is a nod to the pictorial practice of Vincent van Gogh, who was constantly capturing the shades of the Provençal sky on his canvases during his time in Arles.

The architect also wanted to give the building a mineral touch through its shape and internal structure, which are imbued with the rocky landscapes of the Alpilles, especially the Val d’Enfer near Les Baux-de-Provence. He even used elements of the geological vocabulary to characterize certain parts of the building, such as the glazed “faults” that run along the façade and connect the towers together.

The Tower itself sits atop a metal-framed, glass rotunda 177 feet in diameter that was inspired by the nearby Arles Amphitheatre. Influenced by the Colosseum in Rome, the two-tiered amphitheater, completed in 90 AD, is among the top UNESCO World Heritage Site-listed attractions in the ancient city. Like the Roman arena, the scale and geometry of the rotunda reflect the influence of Roman urbanism on the city.

• It is made up of 4 interconnected towers attached to a concrete spine that houses the elevators and stairs.

• The façade is decorated with 11,000 stainless steel bricks deformed by a specific mechanical process. Each of these bricks is unique and has a special number and location on the building.

• Glass boxes serve as windows extending beyond the façade to offer different views of the site and its surroundings.

• The glass rotunda, called the Drum, is the central element of the building and measures 54 meters in diameter with a maximum height of 18 meters. Blinds can be spread following the path of the sun to protect the spaces.

• The energy supply for this building, as well as for the other buildings on the site, will be provided by the centralized cogeneration system using waste vegetable oil installed in Les Forges.

information courtesy of LUMA Arles and The Architect’s Newspaper