` Fang Tong Pool Photographs on If It's Hip, It's Here
Skip to content 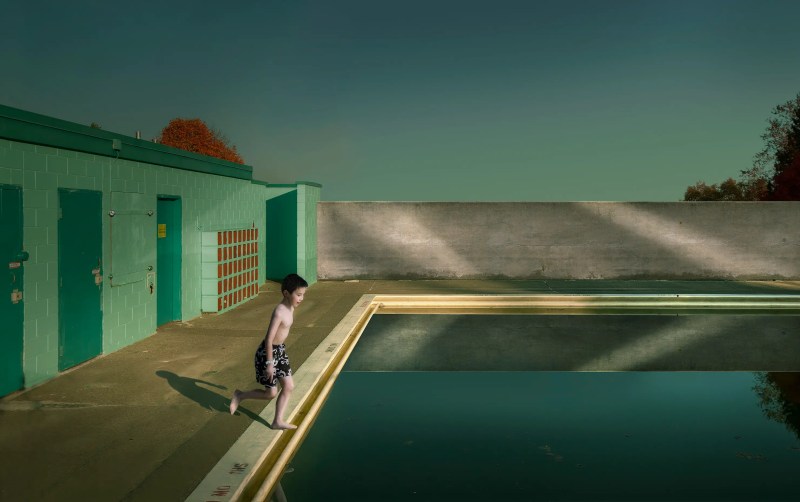 Fang Tong is a Chinese-born Canadian artist and photographer whose work lives somewhere between reality and surreality. A self-proclaimed daydream photographer and spectator of life, her narrative works are plentiful, but – given my obsession with pools, both real and in art, I couldn’t help but notice the numerous appearances of the swimming pool within her works.

The following images are taken from her Love Illusion, The Chen Family and Water series of photographs.

“Under normal circumstance I stay away from create an illusion (sic), give her the tools to develop a storyline in the same way a dreamscape does; the imaginary world strangely familiar while the narrative arc takes us on a hyper-visual ride through our sub-consciousness. It’s this balance between the real and the surreal that pulls us into Tong’s world and in these photographs, of women and a child around a pool, she gives us a specific scenario while being utterly opaque. We know nothing of these characters, they swim, paddle, dive, hang out, yet do not connect. They are very much alone. Within themselves.

This conceptual conceit, along with the application of light and colour, create an initial impression of paradise, a holiday, a tourist retreat, yet the longer we look the more we become unsettled. Something is askew. Wrong. The harmony we experienced on first sight washed away by a sense that these people are trapped in a prison of their own making. And while we are entranced by Tong’s beautiful photographs we are inherently aware of the emotional intent of each image.” – Moray Mair on Tong’s Love Illusion series

Fang Tong graduated from the Fine Arts Institute of Shanghai University and studied in France. Currently living in Vancouver BC, she has explored many aspects of traditional visual media – specifically oil painting, sculpture, installation art and digital media such as 2D and 3D design. In recent years, she has focused on photography, and has been awarded several major international photography awards. She has been published in VOGUE and other major domestic and foreign magazines. The photo ‘Swimming Pool’ won first prize in the Nikon International Photography Competition Category C in 2015. She was commissioned by Sony in 2013 as one of 20 photographers around the world to represent Sony’s camera phone.

The style of Fang’s photography is between realist and surrealist. Everything that happens in her photos is based on real life but there are still some small amounts of odd or strange elements that are included in the work. Fang uses the lens to catch and enhance the mood in the final work. There is always an atmosphere permeating through Fang’s photos.

The following is from her ‘about’ page on her site:
Her works are embedded with an implied narrative, which is left to the viewer to resolve over time with their own imagination. Reflecting her background in classical art, the photography is carefully planned to control the frame and the expression of details, giving her work an ethos of a painter. As a bystander, Fang Tong captures the potential that photography can embody pieces with an eternal quality, thereby creating a slightly fictional world that resembles reality but transcends consciousness. Fang Tong’s passion is for her work to border on the surreal, yet hold back enough to keep it firmly in the real world. Her photos provoke audiences to create a narrative out of cinematic pictures. There may be no clearly defined story behind the scene, but there is a strong mood and atmosphere throughout the whole image. The imaginary world is strangely familiar while the narrative arc takes audiences on a hyper-visual ride through people’s subconsciousness.