Absolut, in collaboration with Stonewall, has enlisted 12 artists and designers to create one-off bespoke versions of their limited edition bottle – Absolut Mix, a colorful design inspired by the six colors of the LGBT Pride flag. The one of a kind bottle designs are being auctioned off in honor of London Pride 2016 with 100% of the proceeds going directly to support the UK’s leading LGBT equality charity Stonewall.

Now, here’s a look at all 12 bespoke editions of the above bottle, presently for auction here. SIBLING is a collaboration between Sid Bryan and Cozette McCreery launching in May 2008. Fun, fresh, vibrant and optimistic – SIBLING was always a knitwear label with a difference and their menswear and womenswear collections shown in London seasonally have become keystones of the cities fashion landscape.

SIBLING have knitted a vodka-cosy! It’s fluffy and rainbow stripe but it has balls! Lyall Hakaraia is a London nightclub owner, event director and fashion designer whose couture pieces have been worn by global talents from Beyonce to Lady Gaga. He owns London’s favourite disco basement, Vogue Fabrics and continues to be pivotal in the curation of it’s exciting and unexpected event series acting as a platform for undiscovered and left-of-centre creativity across the capital and world.

The Absolut VFD bottle is a twist on the classic ‘message in a bottle’ and is displayed in a mirrored case that allows the viewer to fully appreciate the applied art work from every angle. 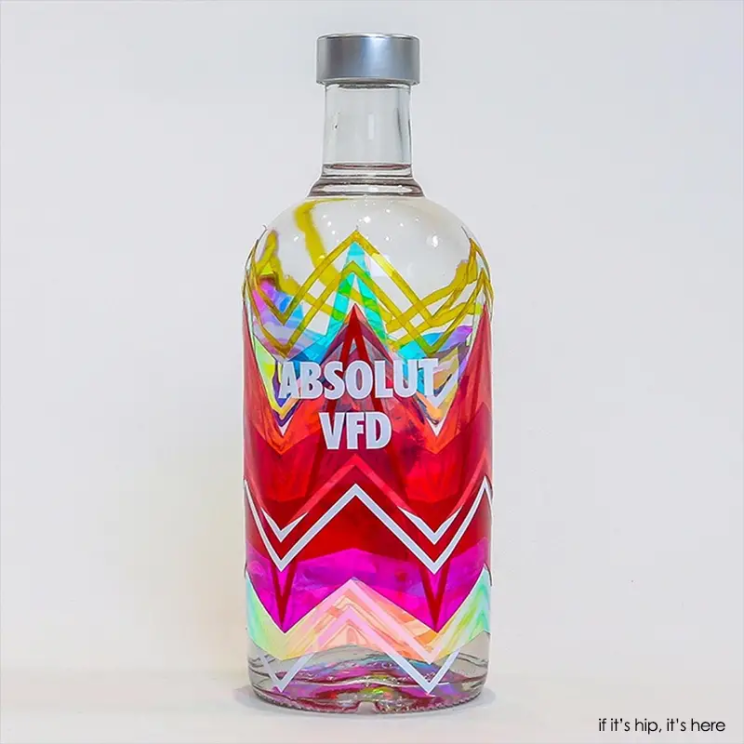 “The design on the bottle was executed by Tino Seubert and echoes the zig zag patterns that dominates the decor at VFD, with iridescent foils that reflect every colour and hue of gender and sexuality.” Described by the Guardian as “A Camptastic rave up, a joyous mess of face paints, glitter and wigs” Sink The Pink is the gender-bending, over the top, anything goes London club night that changed the face of partying in London.

The Sink the Pink philosophy is “more is more”. So they have channelled this with a rainbow pom-pom zing fest applied to the bottle! 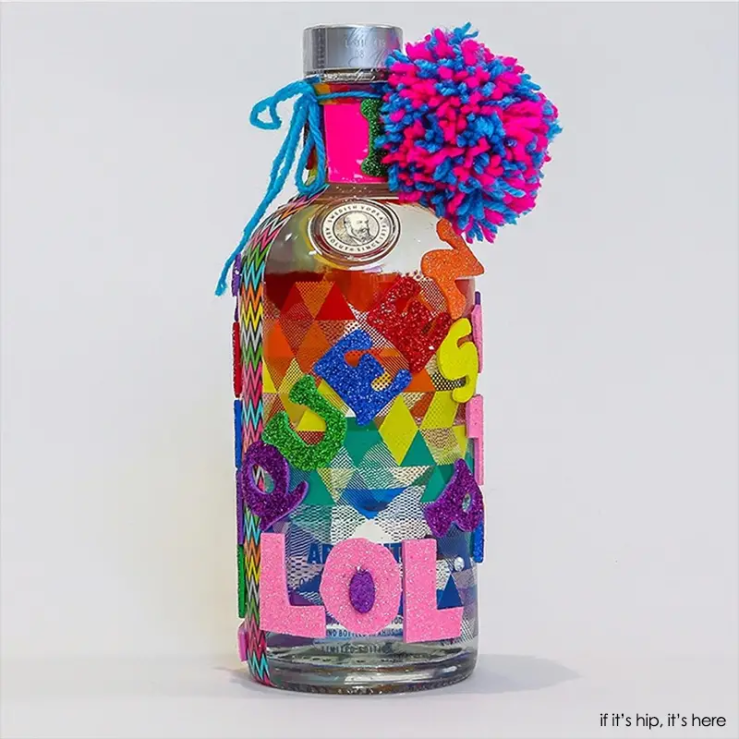 “We live in wonderful, seemingly safe and fabulous times, lucky us. Sadly this is not the case around the world and the message of pride is so important. We will be at the front of this years pride, look out for us! The message we give to the world is love, tolerance and freedom to be you, this is of the most importance. Sending big love to all” 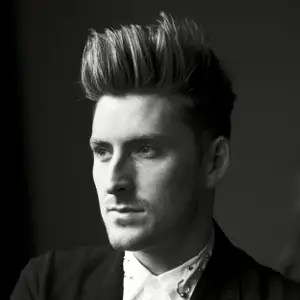 Henry Holland was catapulted into the fashion spotlight in 2006 with his iconic “Fashion Groupies” collection featuring bold catchphrases inspired by stars of the industry at that time. Since launching at London Fashion Week his brand has become a household name with a legion of celebrity fans and collaborating with household brands across fashion, lifestyle and design.

Henry has created a colourful knitted cover for the Absolut Mix bottle. “The inspiration behind our design is celebration. Pride for me is about celebrating who you are, your uniqueness, your individuality and your true self.” 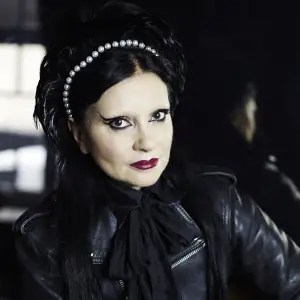 Julia’s bottle is based on drag queens & characters from the scene with some added touches. Piers Atkinson grew up in a household of hats with his mother working as a theatrical miliner for the English National Opera. He moved to London to pursue an education in photography and then hopped, skipped and jumped through journalism, PR, creative direction and finally into fashion. Launching the Piers Atkinson brand in 2008 with a witty, tongue-in-cheek signature style he has become one of only a handful of milliners making an impact on the world stage today.

Piers Atkinson has created a decoration for the Absolut bottle that can worn! Pride is about fearlessness in self-expression so he wanted to decorate the fabulous rainbow bottle with something that could be worn with pride – a red glitter micro-version of the famous cherries, with a rainbow sparkle Swarovski crystal veil following the design printed on the bottle. 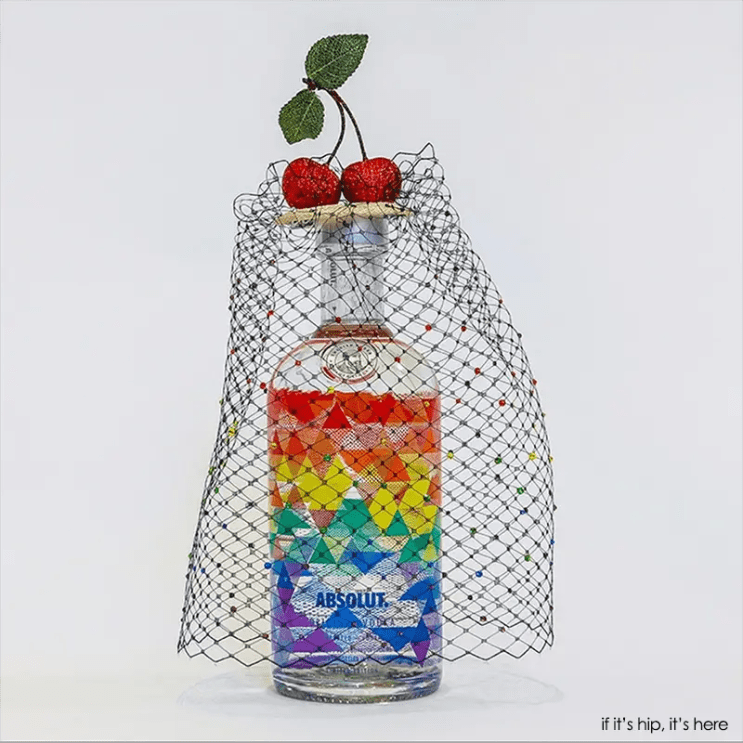 “Any little I can do to promote equality, understanding and acceptance for LGBT people is a little step forward our ongoing fight for tolerance in schools, the workplace, and communities. I am proud to be asked by Absolut and Stonewall to contribute my voice to the chorus.” Fred Butler is a London accessories designer and style personality. Alongside creating collections and showing at London Fashion Week she has also worked with a range of clients to create bespoke set pieces and creative projects across almost every product category imaginable. Her established blow is celebrated the world over for her coverage of London’s creative scene and her cultural perspective on the city.

Bottles are covered in sequins and rhinestones at carnival, so this is Fred’s interpretation of a celebration theme but made with her signature folded foil ruffles. Fred found every colour of the spectrum to make the entire rainbow for Pride. 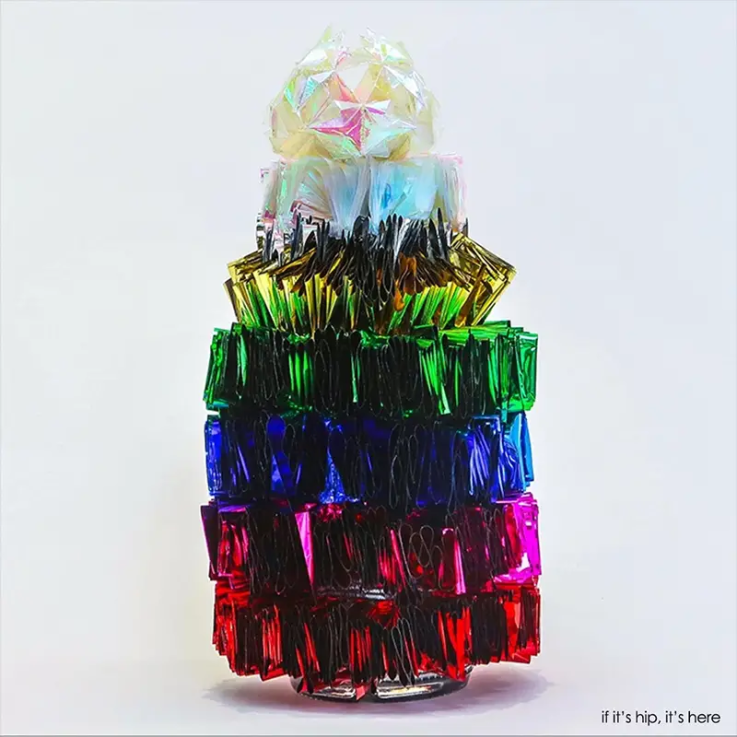 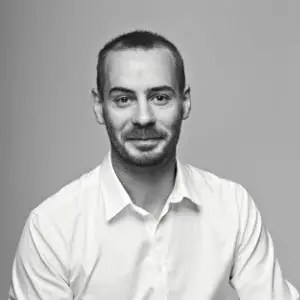 The Most Beautiful Man in The World is one of the newest and hottest new magazines to enter the market. Directed and edited by stylist Frank Strachan known for working with some of the biggest names in pop today, it is a compilation of fashion and photography shot on undiscovered and emerging beautiful men from across the globe.

Frank has always loved a ‘Smash Hits’ style free sticker sheet, and revelled in the chance to create a twist on this using past subjects of The Most Beautiful Man In The World – including their latest issue in a celebration of pride – to decorate a bottle of Absolut Mix! 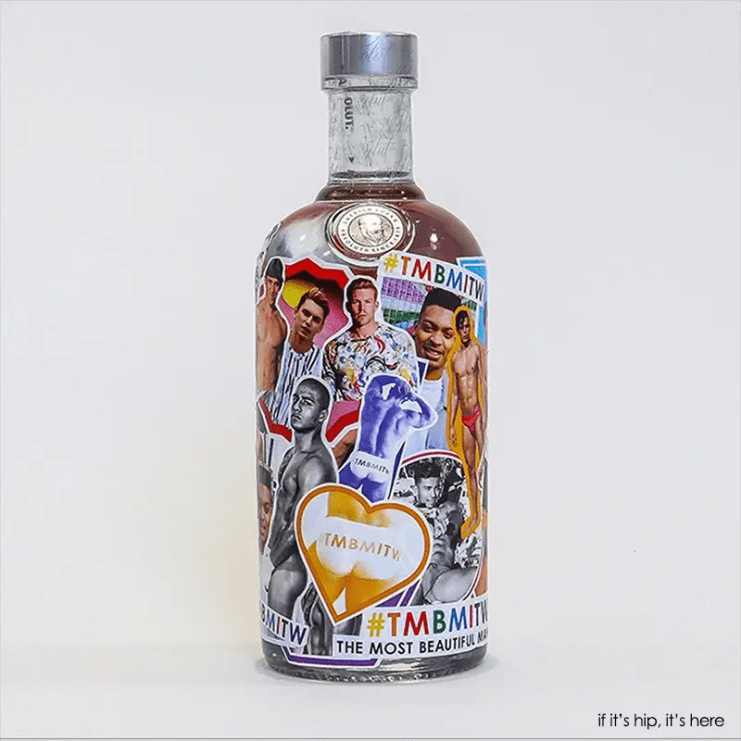 Ed Marler shot to fame after his graduate show from Central St Martins quickly going on to become the hot name within emerging British womenswear talent. Turning the tide of commercially focused designer collections on it’s head his semi-couture, extravagant and theatrical approach to womenswear was harked by many as a return to the golden days of fashion.

Ed Marler has wrapped the Mix bottle in fishnet and adorned it with gems and a crown. “I wanted the bottle to feel quite Soho, a bit old fashioned London pub meets a bit of glitz and glam.” 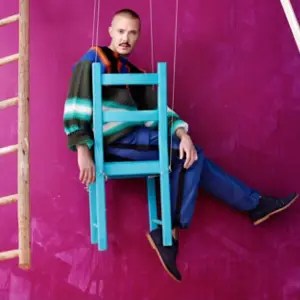 James Davison is a London based illustrator whose style is recognised for its suggestive humor and camp aesthetic. He has sketched at all major fashion weeks and collaborates regularly with designers and brands including James Long, Sibling and MAC cosmetics.

The bottle design features a bright playful bottle that was a bit tongue in cheek, using polari as a nod to queer culture and history. 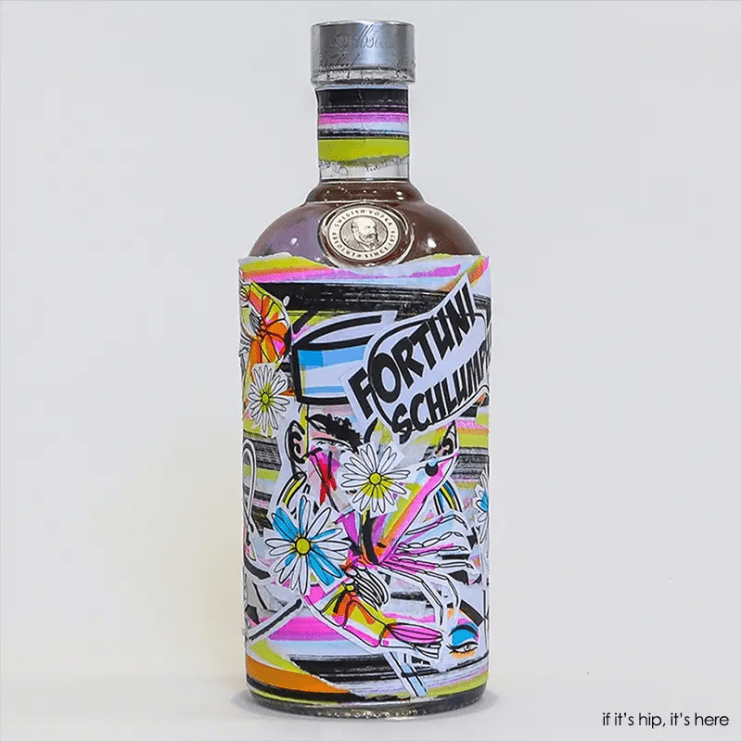 “Pride is important as its one way we acknowledge how fortunate we are but also the challenges we face.” Gareth Pugh is a fashion designer who has received global recognition for both his outlandish clubwear and his novel approach to redefining modern luxury.

Hand-painted with a signature red and white Gareth Pugh design – a candy stripe starburst inspired by the spirit of London’s Soho – the designer has created a piece both elaborate and surreal, in keeping with the ethos of his label. 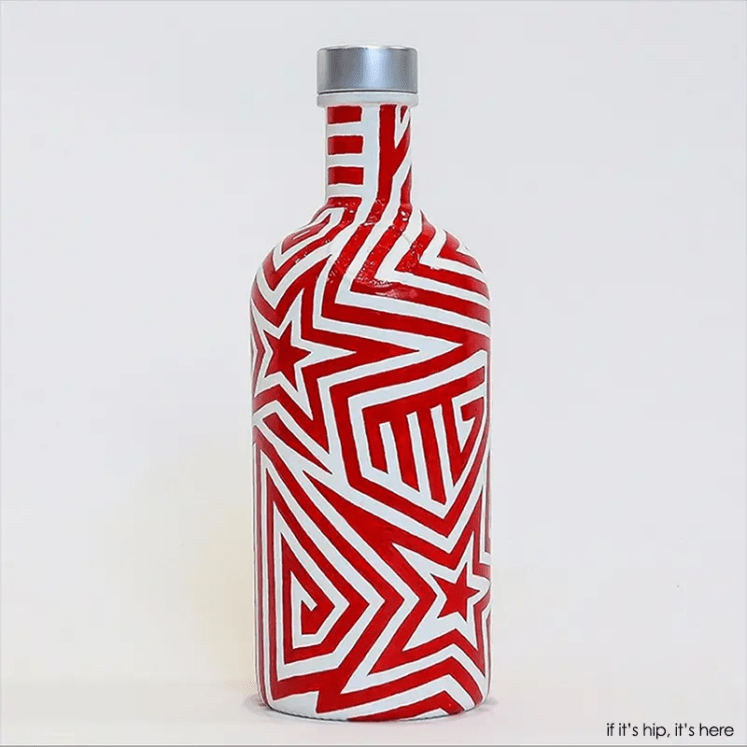 “Pride is a powerful statement as it directly connects an iconic brand with the iconography of progress and tolerance.” 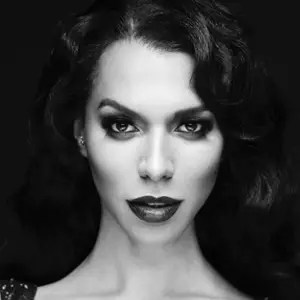 Munroe Bergdorf is a London based DJ, model, activist and advocate for the transgender community. Bergdorf also regularly appears in the media discussing issues surrounding gender and race. She recently appeared in a viral video for The BBC called ‘Things not to say to a trans person’ which amassed over 3 million hits in under two days on Facebook.

Munroe has adorned the Absolut Mix bottle with love for Pride in support of Stonewall! Using red lacquer, she covered the bottle with kisses, from her own lips, in a minimalist but heartfelt design which embodies the love we celebrate each year at Pride. About Stonewall:
Stonewall is Britain’s leading charity for lesbian, gay, bi and trans equality, working to create a world where every single person can be accepted without exception. Founded in 1989, in direct response to Section 28, by a small group of people who wanted to break down barriers to equality. Stonewall continues to campaign and lobby government to change laws and promote inclusion so that everyone, everywhere, is free to be themselves.

Stonewall works in partnership with a growing network of organisations, institutions, communities and individuals to help create real change for the better, and aims to empower LGBT people and their allies to be role models wherever they live, work, shop, socialise or pray.

This Is Not A Toy, It’s A Fragrance. Moschino TOY by Jeremy Scott.