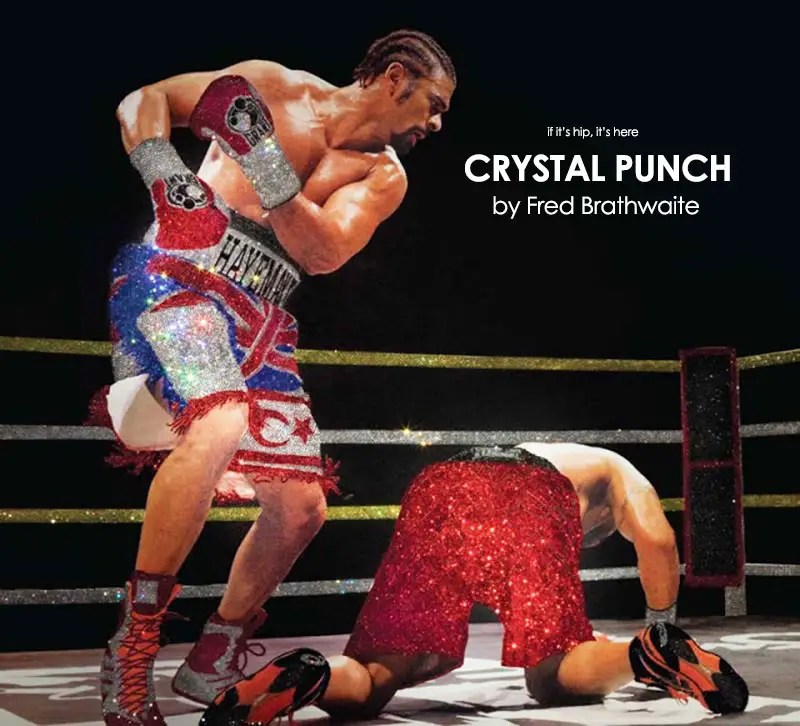 The Cosmpolitan Las Vegas, in conjunction with the Art Production Fund, has been featuring the work of Fred Brathwaite (aka Fab 5 Freddy) as the first artist-in-residence at their on site at gallery, the P3 Studio. The show, Crystal Punch, opened on December 15th and will run through March, 2011. 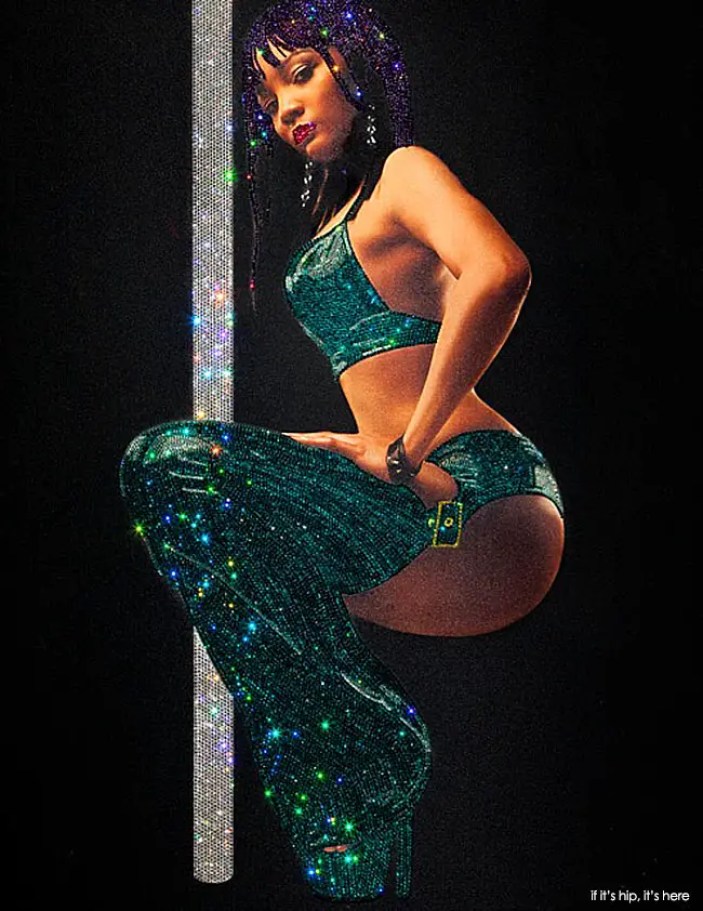 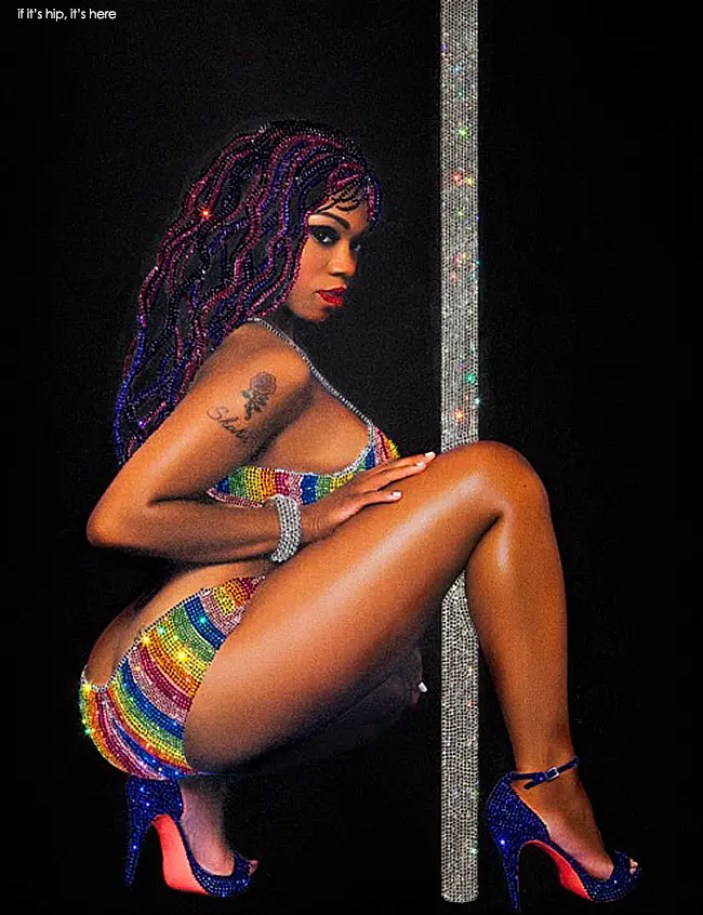 In an article by Michael Slenske for Interview Magazine, Brathwaite says “I started doing these boxers first, then just started adding these women to have a female counterbalance. They’re not necessarily strippers, I see them as showgirls. The pole was added as a formal element after the images were rendered, kind of like a sexy icon, like a Vargas pin-up, or a Renoir nude. I found out later that one of the boxers was the British heavyweight champion David Haye, but it was more about what was happening on the surface,” says Brathwaite, who plans to continue the Swarovski-studded works with future shows in New York and Los Angeles, where he’s working as the curatorial advisor to Jeffrey Deitch for the upcoming “Art in the Streets” exhibition at LA’s MoCA this April. “I first met Jeffrey at Edit deAk’s loft, and he came to see the work I was doing and what was happening as we started to make a buzz, so it’s cool to be working with his team putting this show together.” 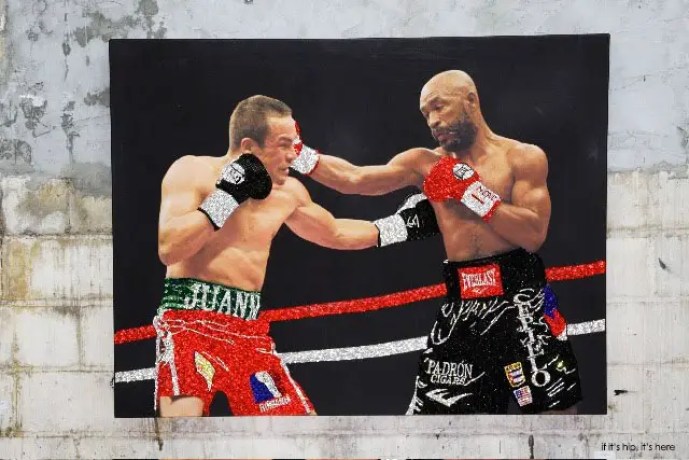 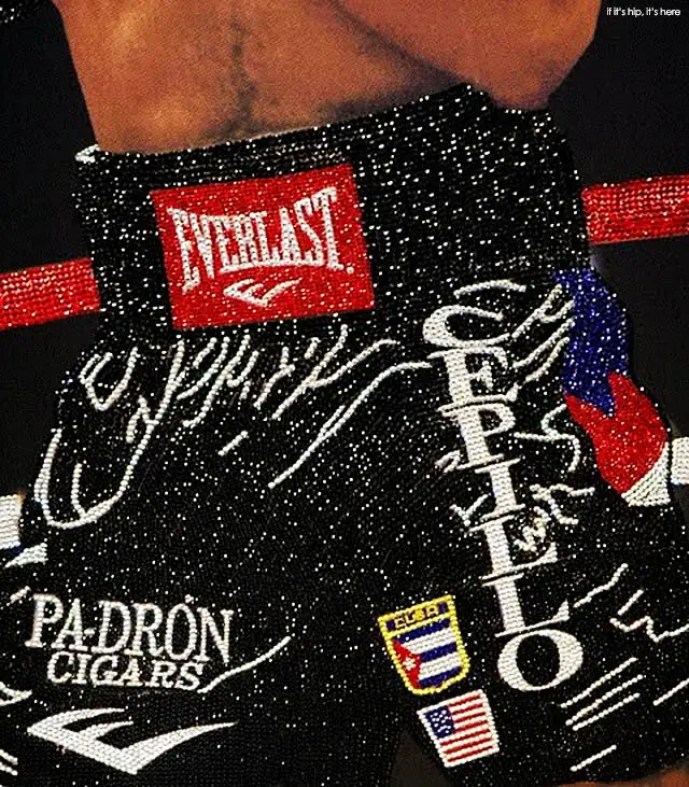 According to Fab, “These pieces are about light and the movement of the viewer, part of a narrative set on a Kabuki like stage where these boxing gladiators are newly illuminated, a reflection of the gloss on their lifestyle and sport. And the crystals add glow and power to these women, set on the same stage.” 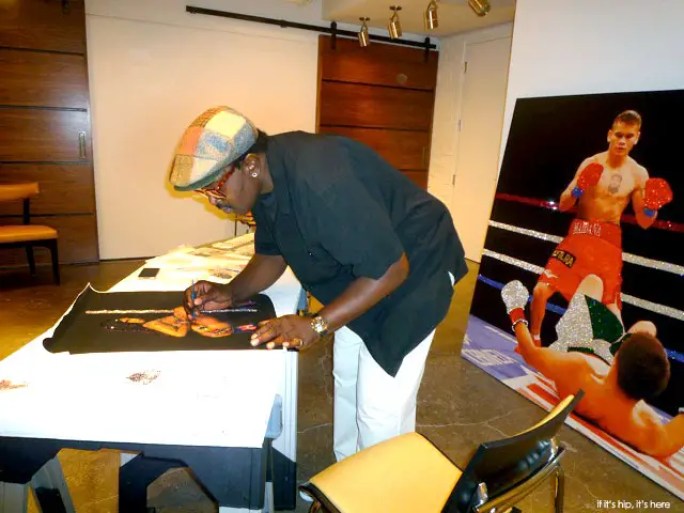 The Swarovski crystals he applies to the canvases: Bio (from his site):

Fab 5 Freddy is a pioneer, a cultural legend and one of the key architects who brought hip-hop culture world wide and mainstream.

His 1980 homage to Andy Warhol, a subway car covered in Campbell’s soup cans is considered one of the all-time classics of subway graffiti.

Fab then begins to exhibit his paintings on canvas in major galleries here and abroad. At that time he became the liaison between New York’s downtown film, music and art scenes and the new hip-hop scene developing in Harlem and the Bronx.

He was affiliated with close friends and art world titans Jean-Michel Basquiat and Keith Haring and appeared along with Basquiat in Blondie’s ground breaking 1981 music video, “Rapture”, in which lead singer Debbie Harry immortalized him in that song with the lyrics, “Fab 5 Freddy told me everybody’s fly…”

He’s also featured in Basquiat’s film, “Downtown 81?.
Fab soon brought his vision to the big screen and produced, composed all the original instrumental music, and starred in the 1981 cinematic classic, Wild Style. Wild Style is the first hip-hop feature film, recently recognized by Rolling Stone magazine as number 7 on their list of the top 25 Music DVDs of All Time. His 1982 single, “Change The Beat”, is a hip-hop classic that has been sampled and scratched (ahhh, this stuff is realllly, FRESH!) by producers and DJ’s countless times.

In 1988, MTV tapped Fab 5 Freddy to be the first host of Yo! MTV Raps, which quickly becomes the highest rated show on the channel. It was his idea to be the first VJ to take a show out of MTV’s studios onto the streets, across the country and then over seas. He brought MTV instant credibility along with his intelligent, engaging and insightful forays into the depths of hip hop culture and it’s major players.

In addition, Fab has published numerous articles and essays on pop cultural topics for publications like Vibe, XXL, Interview and The New York Times Magazine and he penned the first dictionary of Hip Hop slang titled, “Fresh Fly flavor”.

Beyond the page and the small screen, Fab 5 Freddy was an associate Producer of the classic New Jack City and a consultant on and appeared in 2007’s block buster hit, American Gangster. Fab also recently guest stared on Law And Order: Criminal Intent where he played the gunned down rapper, “Fulla-T”. And in 2007 Fab 5 Freddy, as well as being an executive producer for the show was awarded with a VH1 Hip-Hop Honor award for his involvement in Hip Hop’s first feature film, Wild Style.

He’s currently back making art and will be featured in a a huge Los Angles MoCa show that will examine the history of graffiti art into the current street art movement this coming spring.

Paintings of The Stahl House and Pool by Carrie Graber