` The Coolest Prize Ever Offered In An Online Competition: A Trip To Space - If It's Hip, It's Here
Skip to content Ordinarily, I’m not a fan of any online ‘competition’ and I have yet to ever enter one. That said, Land Rover’s Galactic Discovery competition has a prize so awesome, I had to give you all the opportunity to enter. It really doesn’t require much. All you have to do is produce a 30-second video, or a still image, that demonstrates your spirit of adventure, submit it and you could win a trip to space with three of your friends. Land Rover’s Galactic Discovery competition offered by Land Rover and Virgin Galactic is part of an advertising campaign to mark the reveal of the New Discovery Sport. The car was unveiled to the world on September 2nd in a film shot at Spaceport America, New Mexico, which will be the base for Virgin Galactic’s sub-orbital space flights. The film forms part of Land Rover’s biggest ever digitally-led campaign, debuting the New Discovery Sport exclusively to an online audience for the first time.

The global competition began yesterday, September 3rd, and runs through 31st October. Over the next four months, the brand will harness the power of social media, PR and digital marketing across 40 countries to launch the New Discovery Sport and seek out the world’s most adventurous spirits. The campaign will culminate with the announcement of the four winners in December 2014.

What You Need To Do:
In 30 seconds, show what the spirit of adventure means to you. Whether it’s climbing a mountain, trying something new for the first time, taking your family camping or a midnight drive. 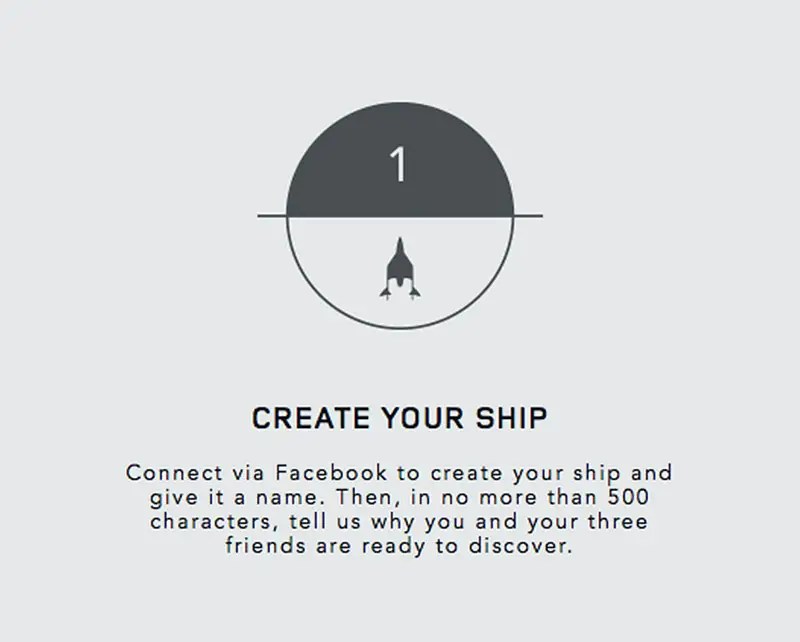 Once you finish, upload and tag the three friends or family you would take with you on this new adventure. Entries should be visual and imaginative, so get creative. Note: You’ll need to connect your Facebook account to create your ship. This makes it easy to choose who’s coming with you. 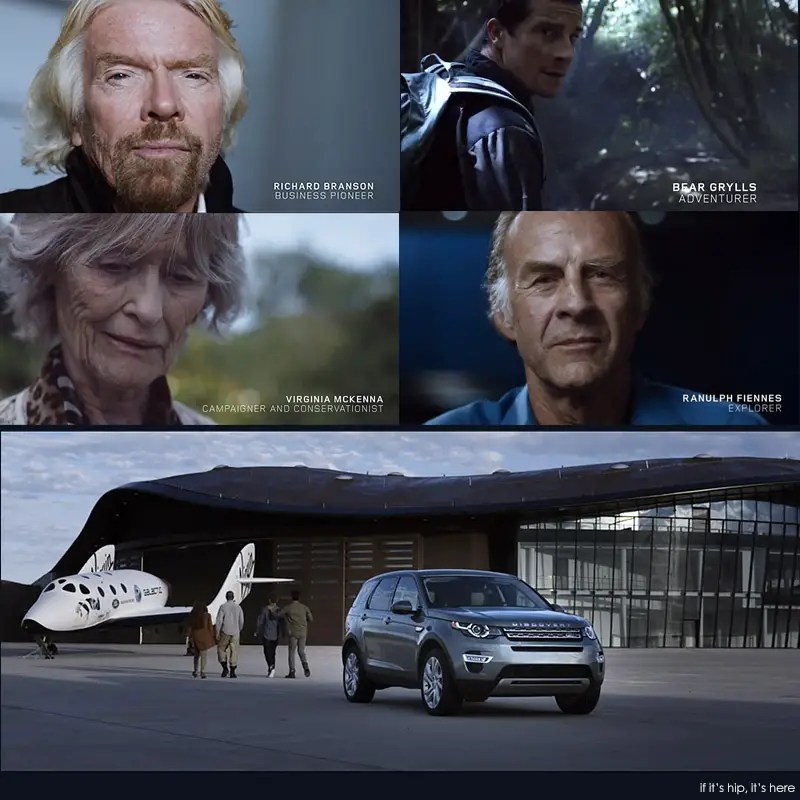 Check out the films below from Adventurers Sir Richard Branson, Bear Grylls, Sir Ranulph Fiennes and Virginia McKenna for inspiration and to help you get started.

Richard Branson explains the spirit of adventure as trying to make the impossible possible, despite the many challenges one might face:

For Bear Grylls, the opportunity to go to space is the ultimate adventure, and one he never dreamt to go on:

The press release below has the details and related info:
LAND ROVER LAUNCHES WORLD’S FIRST COMPETITION FOR GROUP OF ADVENTURERS TO WIN A TRIP TO SPACE

Whitley, UK, 00:01 BST, 3 September, 2014: Four friends are set to win a once-in-a-lifetime trip to space, in Land Rover’s Galactic Discovery competition, a ground-breaking online search for a group of aspiring astronauts to go on the ultimate adventure.

The incredible Virgin Galactic space flight prize was announced to audiences around the world through a film featuring a group of the world’s greatest-living adventurers and personalities, including Sir Richard Branson, Bear Grylls and Sir Ranulph Fiennes.

It will be the first time that a competition has offered the chance for a group of four friends to win a trip to space. The winners will be among the first pioneering travellers to view the earth from space and experience out-of-seat zero gravity.

The extraordinary opportunity is being offered by Land Rover and Virgin Galactic to mark the reveal of the New Discovery Sport, a compact and versatile SUV and first of a new Discovery family. The car was unveiled to the world in a film shot at Spaceport America, New Mexico, which will be the base for Virgin Galactic’s sub-orbital space flights. The film forms part of Land Rover’s biggest ever digitally-led campaign, debuting the New Discovery Sport exclusively to an online audience for the first time. Over the next four months, the brand will harness the power of social media, PR and digital marketing across 40 countries to launch the New Discovery Sport and seek out the world’s most adventurous spirits. The campaign will culminate with the announcement of the four winners in December 2014.

Phil Popham, Jaguar Land Rover Group Marketing Director, said: “Only Land Rover could offer this incredible opportunity: the chance to win the most spectacular group journey of a lifetime. Our heritage is rooted in adventure, exploration and a desire to go above and beyond, and nothing embodies this spirit of discovery more than a trip to space.”

British adventurer and Land Rover ambassador, Bear Grylls, will play a hands-on role in helping the winning group prepare for their voyage beyond the final frontier. He said: “This prize really is the ultimate adventure of a lifetime. I’ve stood on top of Mount Everest and looked up at the black above me, thinking ‘there’s only one place higher to go now’. As humans, it is in our DNA to go where people have never been before, and now four friends have the opportunity to do that.”

Land Rover has assembled a group of experienced adventurers and personalities to back the Galactic Discovery mission, including legendary British explorer Sir Ranulph Fiennes; entrepreneur and founder of Virgin Galactic, Sir Richard Branson; and former actress and wildlife campaigner Virginia McKenna. Each of the stars brings their adventurous spirit, gravitas and wisdom to the launch film, which can be viewed at: www.landrover.com/gotospace

To enter the competition, aspiring astronauts from across the globe are being asked to produce a 30-second video, or a still image, that demonstrates their spirit of adventure, choose three friends to join them on their space adventure and submit it via Land Rover’s website (www.landrover.com/gotospace). Land Rover expects to receive tens of thousands of entries from over 40 countries across the globe.

The Galactic Discovery collaboration signals the next phase of two pioneering companies – Land Rover and Virgin Galactic – working together to push the boundaries of travel and adventure for the next generation. A global partnership between the brands was announced in New York in April this year, and when flights begin, a fleet of Land Rovers will play a key role in Virgin Galactic’s space experience, with future astronauts driving in the vehicles from the spaceport in New Mexico to the spaceship to begin their trip across the final frontier.

George Whitesides, CEO of Virgin Galactic, said: “We share the same spirit of adventure and exploration as Land Rover and it inspires everything we do. Democratising space and giving individuals around the world from all walks of life an opportunity to see the Earth from above is at the heart of our mission as a spaceline.”

Land Rover and Virgin Galactic are now exploring potential collaborations, projects and the development of dual-brand immersive experiences for customers. They are also actively working together on joint STEM education programmes, which encourage young people to aspire to a future in science, technology, engineering and mathematics. Both brands see the huge potential to develop their partnership to inspire others and motivate more young people to pursue careers in these vitally important fields.

Land Rover Galactic Discovery has been launched in celebration of the unveiling of the New Discovery Sport, the world’s most versatile premium compact SUV, and the first member of the new Discovery family. LAND ROVER AND VIRGIN GALACTIC
Land Rover and Virgin Galactic announced a global partnership in April 2014 against the backdrop of SpaceShipTwo, the world’s first commercial passenger-carrying spacecraft, and Land Rover’s new Discovery Vision Concept vehicle. The partnership demonstrates a shared vision of pioneering spirit, technological innovation and sense of adventure, and illustrates a desire to push the boundaries of travel for the next generation.

Both brands see the huge potential to develop the partnership to inspire others and motivate more young people to pursue careers in the vitally important fields of science, technology, engineering and mathematics (STEM).

Similarly, Galactic Unite was formed by the Virgin Galactic Future Astronaut community to create STEM+ opportunities for young people around the world and to promote the necessary skills in students through education, entrepreneurship and the inspiration of space. The aim of Galactic Unite is to help inspire and skill up a generation of people who will power the emerging space industry, and use their skills and expertise to solve global challenges. Galactic Unite works toward this goal by using the energy around commercial space travel to inspire a whole new generation to get excited about STEM skills and entrepreneurialism, as well as creating and delivering innovative educational content and award-based programs around STEM and space-related activities.

Magic Leap Is Just That… Magic.

Balmain Ad Campaign Proves Why They Are Called Supermodels.