` Murals in New York Raise Awareness of Child Slavery - If It's Hip, It's Here
Skip to content 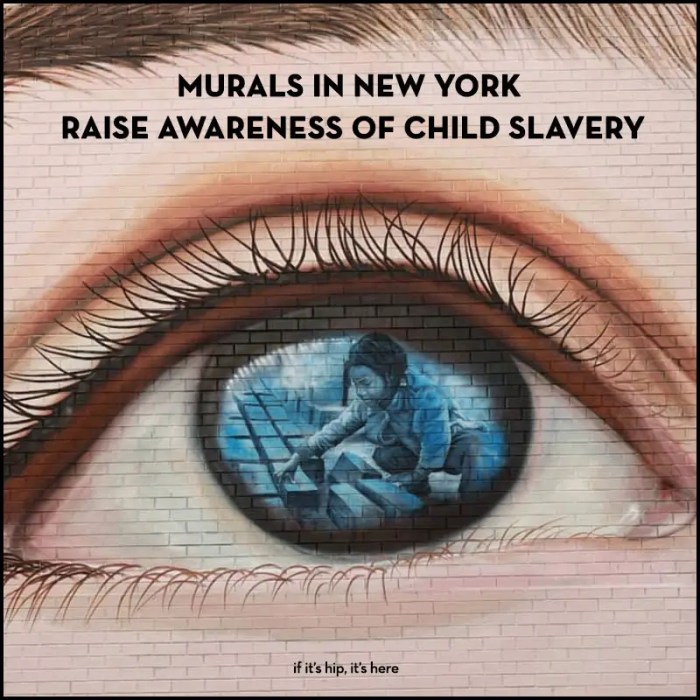 The project, which consists of graffiti murals painted on buildings between East 42nd and East 48th street, also features the largest to date from the organization, by Cuban-born artist Jorge Rodríguez-Gerada. Standing 13 stories high on the Westin Hotel Grand Central, the mural depicts the face of a small boy flanked by two flowers and a dove. The boy’s pupils reflect children rescued from labor camps. The campaign’s murals depict stories of survivors from 5 continents: sex trafficking in the US, domestic slavery in Europe, child soldiers in Africa, child labor in the fashion industry in Asia, in the fish industry in Latin America and in the chocolate industry in Africa. Victor Ash’s artwork tells the story of Melanie Thompson, a 12 year old kidnapped and forced into prostitution in New York. The images are not direct representations of the victims, but rather an “allegory of the issue,” said Audrey Decker, co-founder of SAM along with her husband Thibault Decker. “The point being that this child could be any child, including ours,” she added. French painter Lois Ercolessi’s mural (above) tells the story of 15 year old Ibraham who spent his childhood picking cocoa beans. Child labor in West African cocoa farming first became a cause célèbre around the turn of the century when a number of pieces of investigative journalism focused the world’s attention on the plight of children who had been trafficked to Ivory Coast to farm cocoa.

Another mural by Lois Ercolessi (below) depicts one of the worst forms of child labor… child soldiers. This mural tells the story of Michel, a 10 year old child soldier in Rwanda. 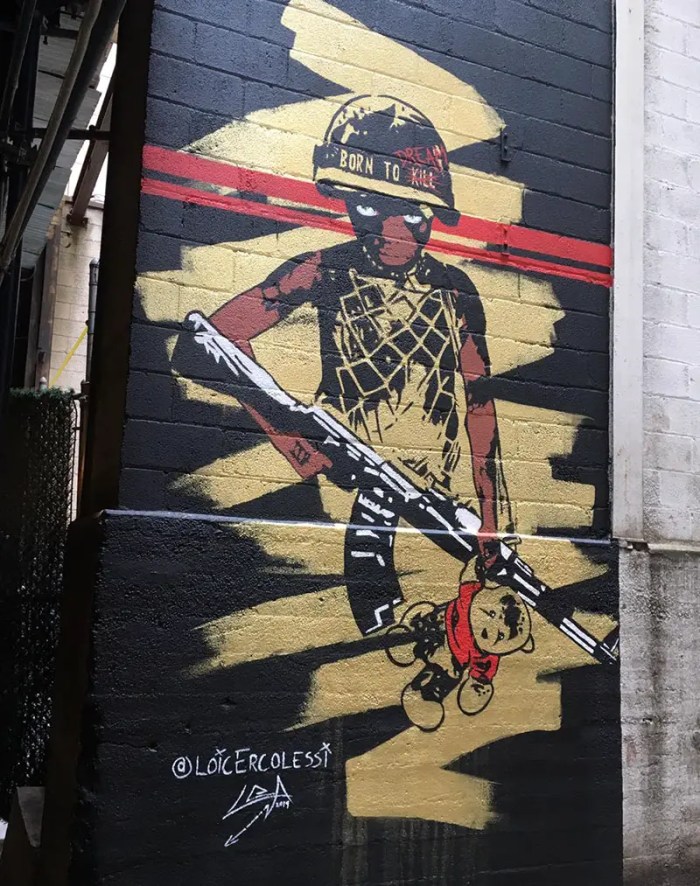 KinMx (aka Kathrina Rupit) comes from Mexico and now lives in Dublin, Ireland. Her mural tells the story of Bithi, a young girl who was sent to work in a garment factory at age 12 in Bangaldesh. 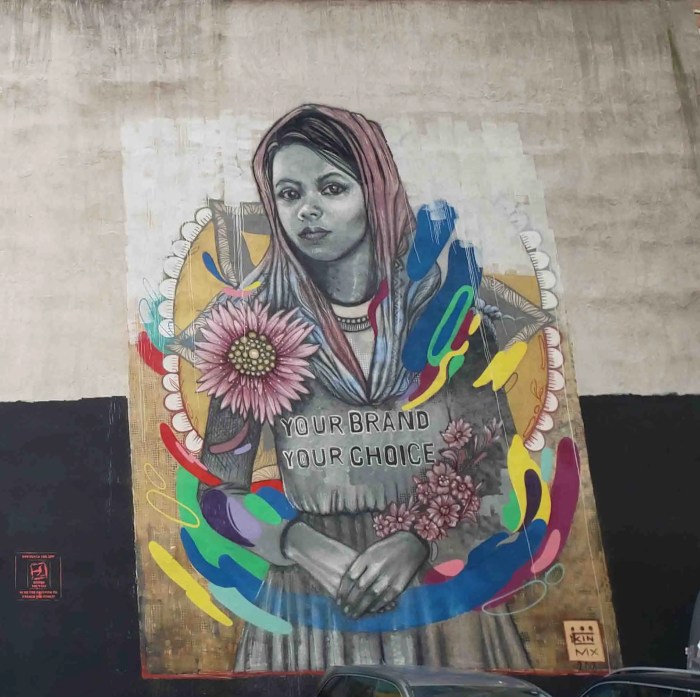 Spanish artist Btoy’s mural depicts the story of Ariel, a 14 year old made to dive for Seafood in Honduras. Mostly working at night, Ariel usually earned about six dollars – but must subtract his costs for boat rental and gasoline. There’s no time in his schedule for school. To get the full experience and enjoy a free self-guided art walk, download the Street Art for Mankind app “Behind the Wall” that gives you the ability to hear community members and artists talking to you about the challenges we are facing and the creative process behind the walls. You will also understand how you can help the eradication of child trafficking.

Street Art for Mankind is a non-profit 501(C)(3) organization uniting prominent street artists from all around the world to free children from forced labor and slavery. 100% of the funds we raise go to awareness campaigns and actions on the field to save children, especially the raid and rescue programs operated by the Nobel Peace Prize laureate Kailash Satyarthi and its KSCF Foundation.

Prints of these and more work by the artists are available at https://streetartmankind.org/paintings-gallery/

The Unusual Art of Christian Faur. Portraits Made With Crayons and More.