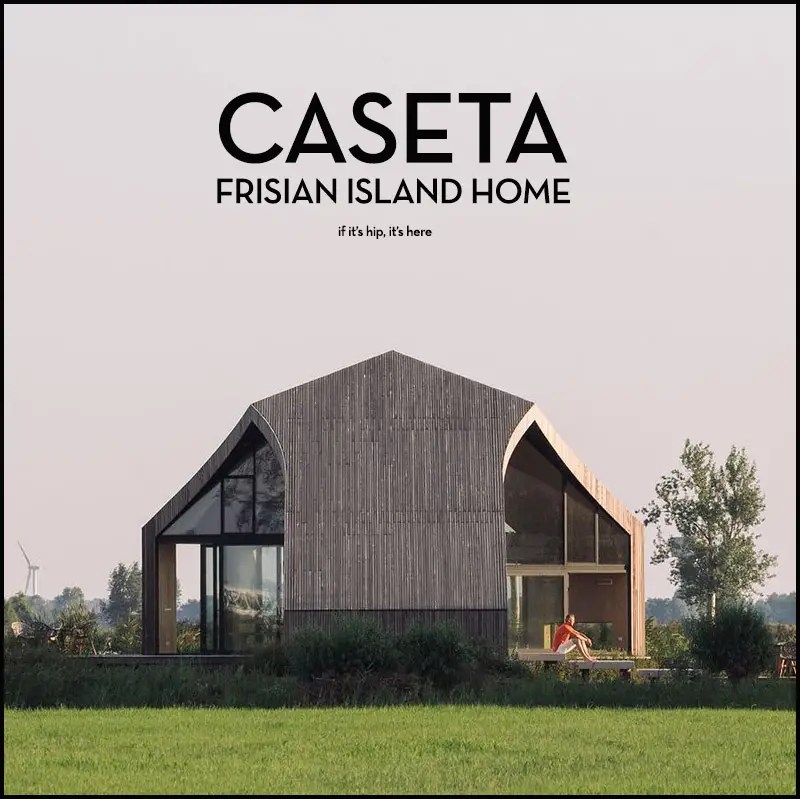 Located on an island in the Dutch Frisian lakes, this holiday home was designed to replace one that was in poor structural condition. Reachable only by boat, Caseta is a stunning piece of residential architecture, inside and out. The West Frisian Islands (known as The Dutch Wadden Islands) are a chain of five islands that lie at the northern side of the Netherlands. The largest of these is Texel, an all year round beach island whose central area is Den Burd.

With wide fields and water in all directions, Texel is a typical Frisian island in that it has its own distinct character and history. Lichtstad Architects was challenged to replace an old holiday home in Den Burd with a new design that maximized the space and environment.

Because the old home had to be demolished, the opportunity arose to reposition the home closer to the island’s edge, reducing the separation between land and water. 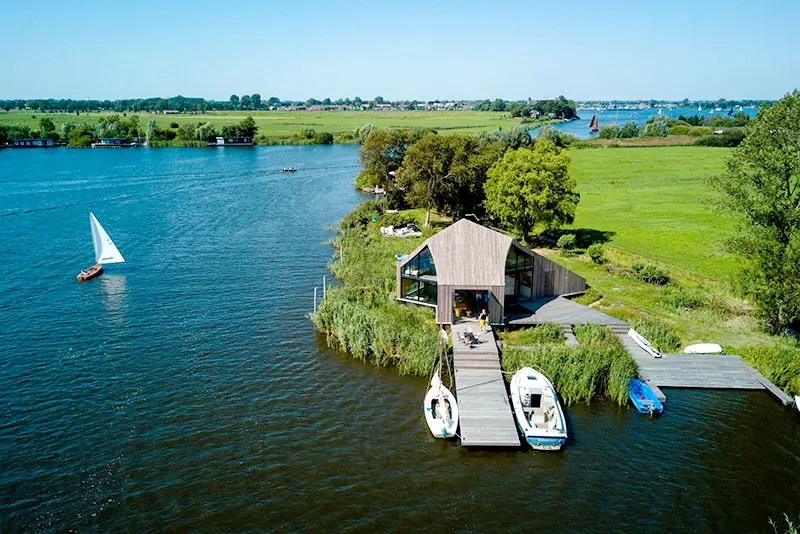 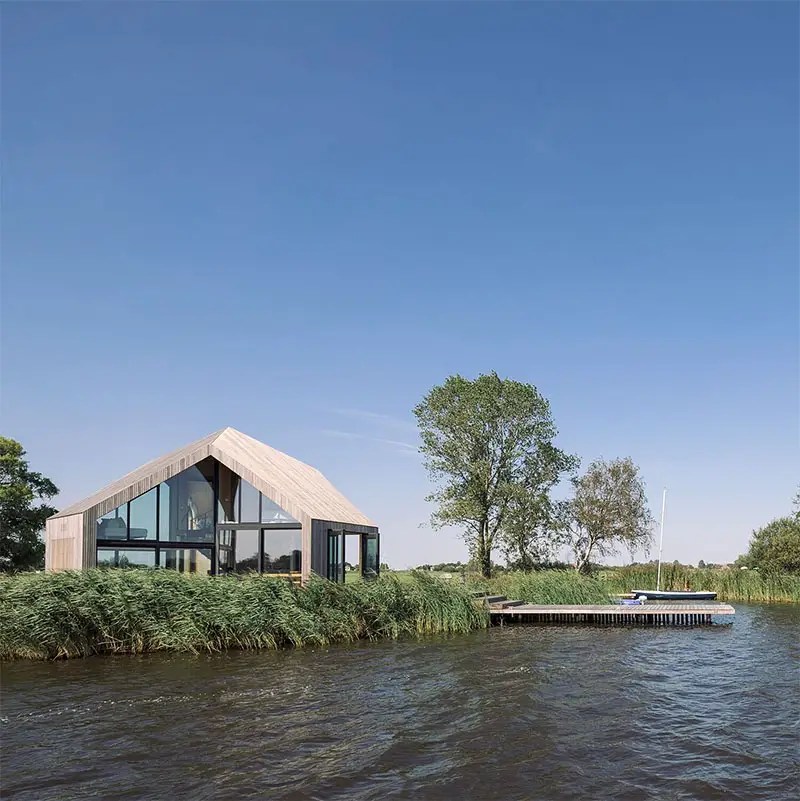 Now, closer to the shore, the new home’s large windows serve two purposes, to let in light and to embrace the surrounding views. 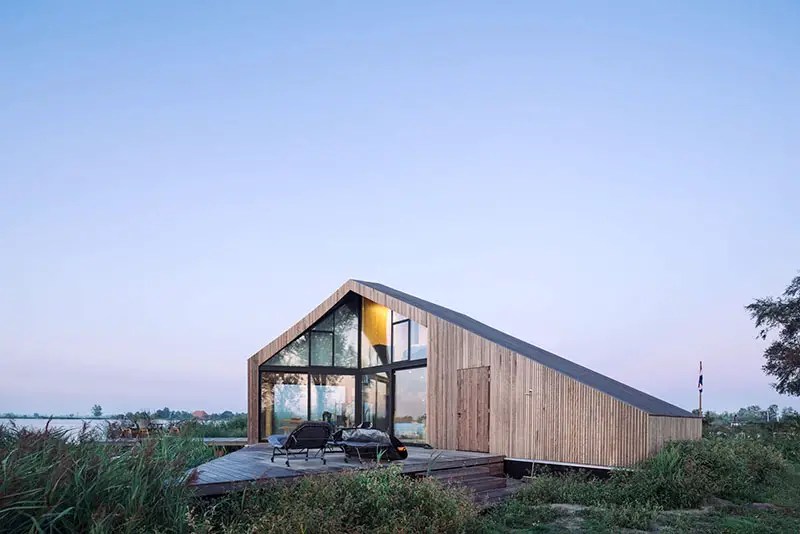 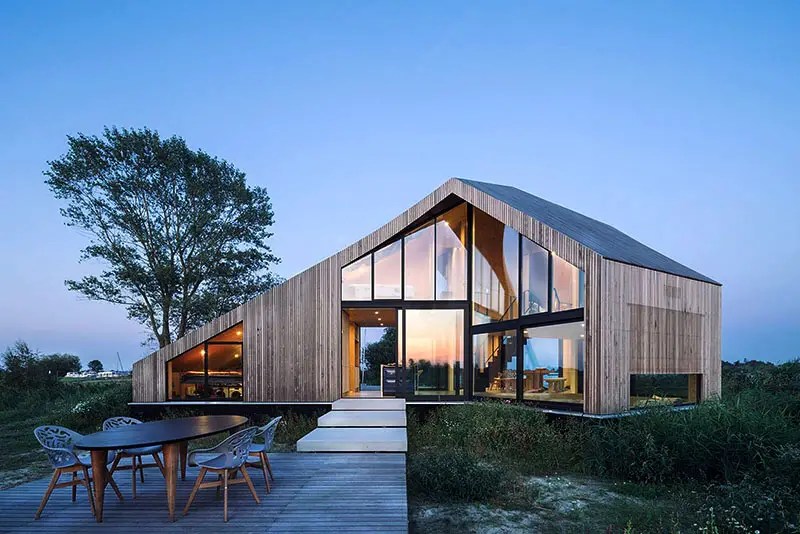 Skûtsjesilen, a popular annual summer regatta between old Frisian freight ships, was the inspiration for the Caseta’s design. 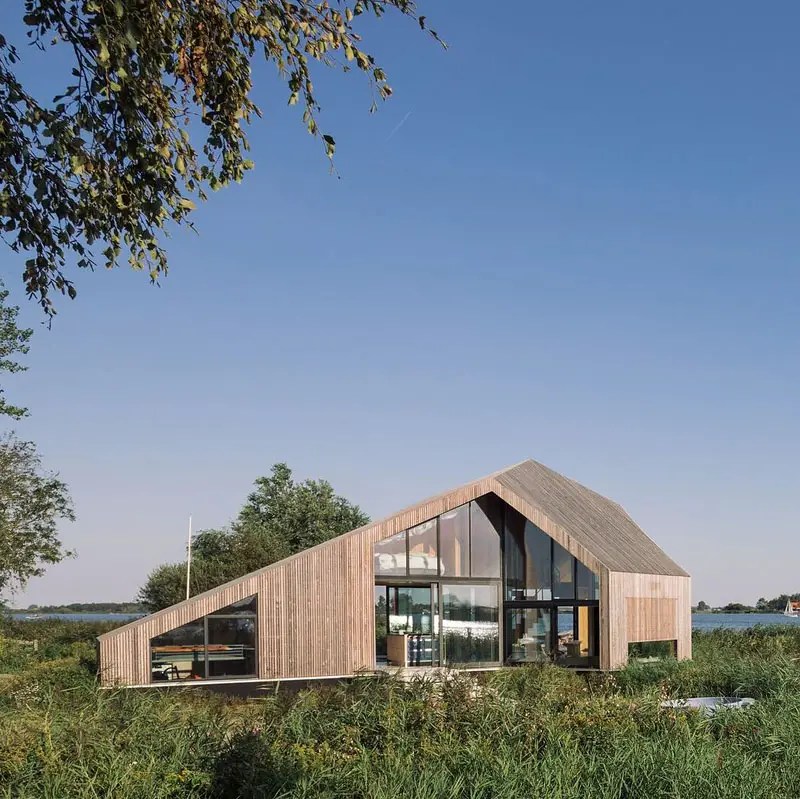 As you move around Caseta, its form and composition appear to change, turning design and landscape into one. Purpleheart wood was used to construct the wooden façades, terraces and the flagpole. The home’s steel frame, floor, wall and roof parts were pre-fabricated before being transported to the island, reducing onsite construction time.

The wooden interior of Caseta is made of an engineered wood for durability and insulation with window frames made of aluminum that have a slender profile. 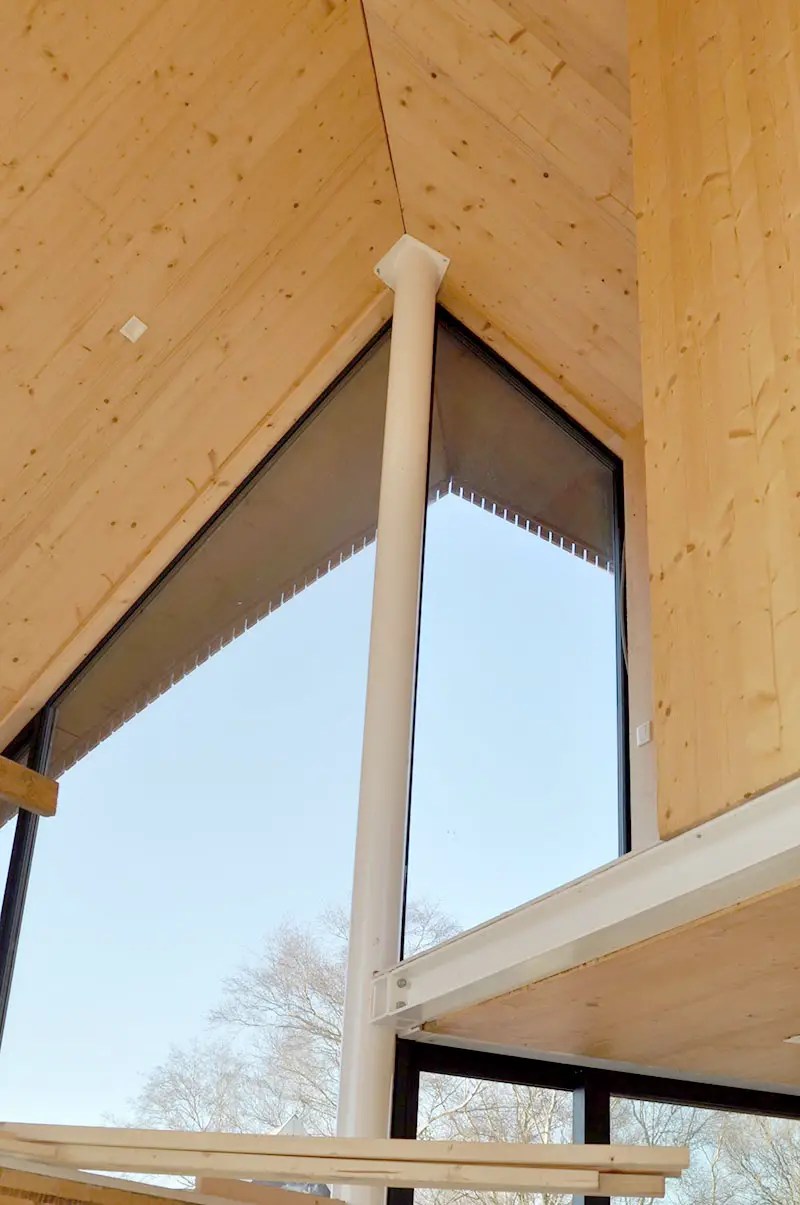 The dining table and benches were then made from the same engineered wood. It’s especially impressive that Caseta has its own water treatment plant. Water is pumped from the lake, filtered and used for the toilet, shower and washing machine. Fresh drinking water is available via a separate tap with an extra filter. 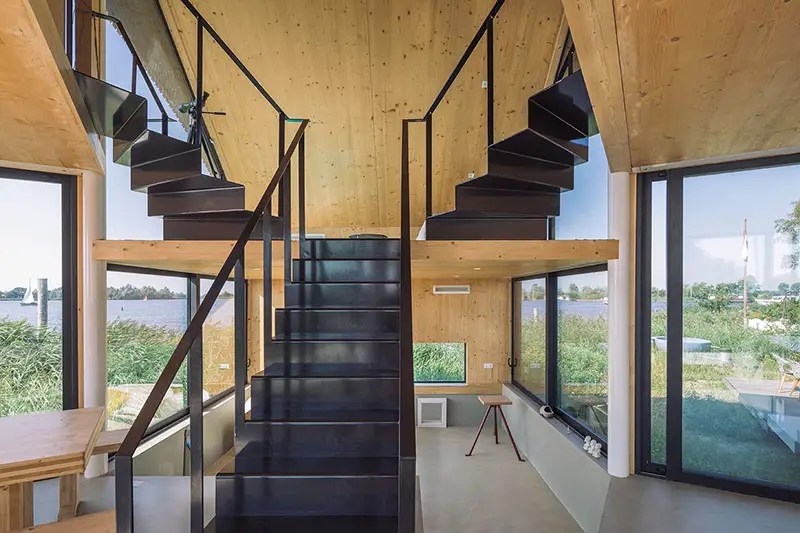 The home’s interior is designed to accommodate all central needs, each within their own space but centrally connected by an open split-level plan. 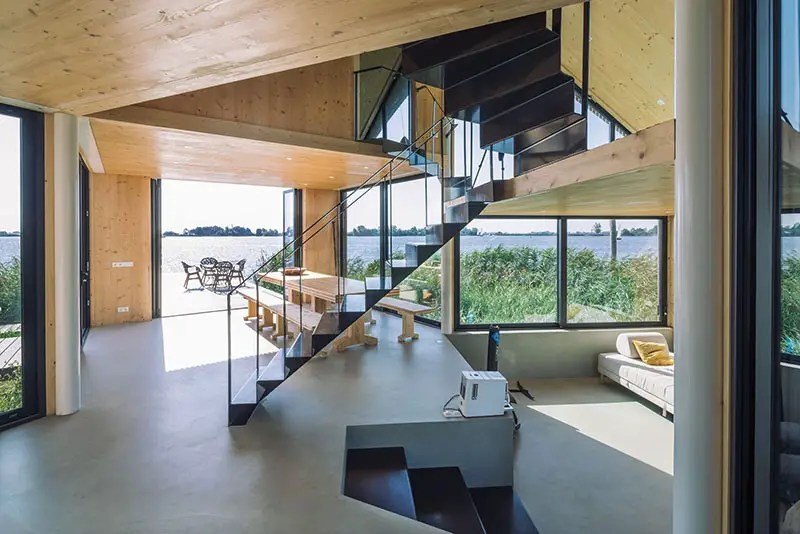 Inside, one is treated to a different view at each level. The lower seating area looks out upon the tops of the blowing reeds, dining is at eye-level with the jetty, and the kitchen overlooks the waterfront. 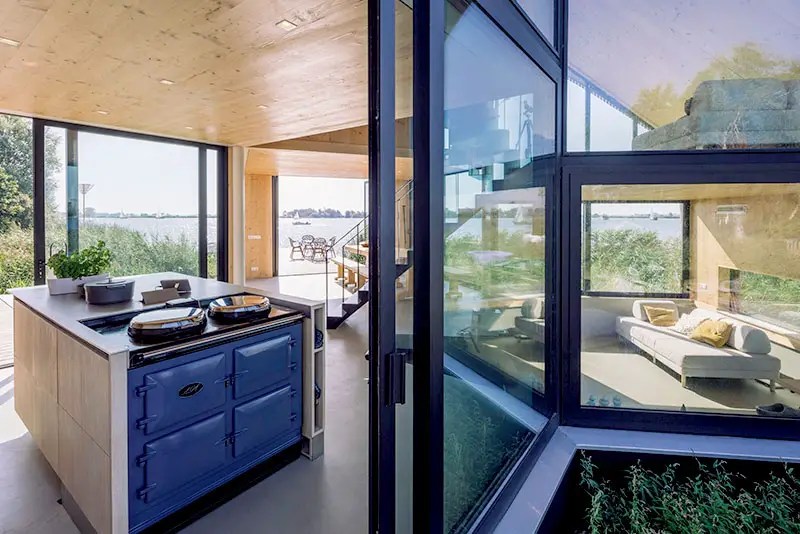 Treated to a different vista at every level, the feeling of being connected with the outside is ever present. In contrast to the floor to ceiling windows, sections of the home are covered by closed façades to provide the feeling of privacy. 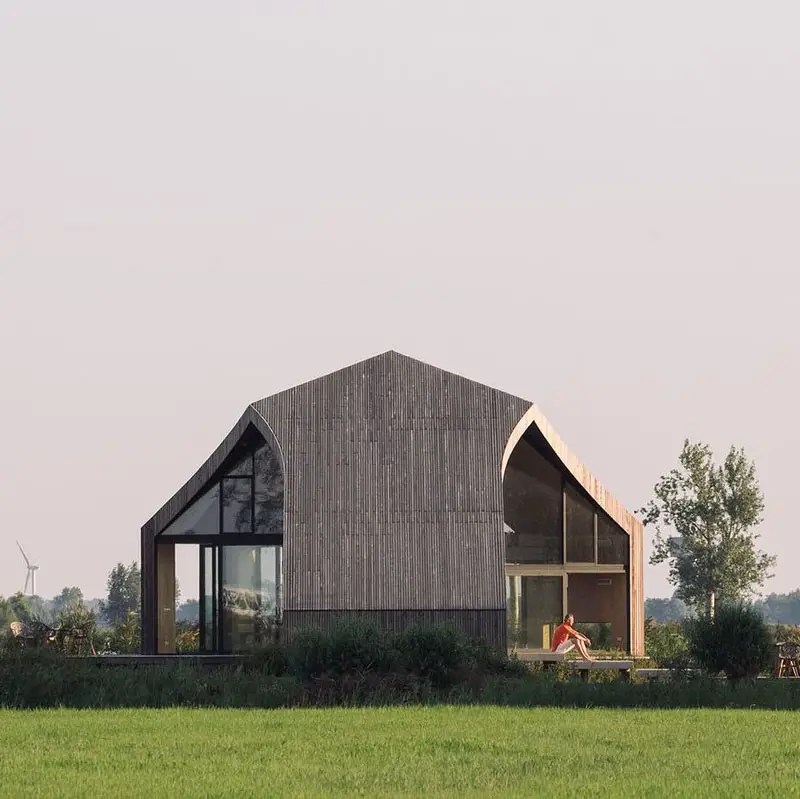 Tour The First Ever Apartment Inside The Eiffel Tower

House 2000м2 is a Huge Eclectic Modern Home In The Ukraine