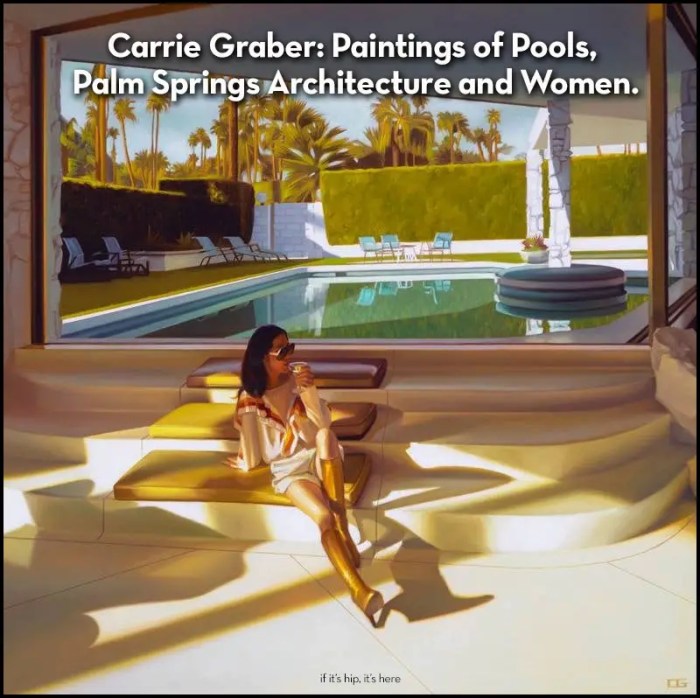 Should you ‘Google’ the name Carrie Graber, you’ll find a preponderance of work featuring slender white twenty somethings lounging around their homes in little black dresses, bathed in evening light. Of these, I am not an enormous fan.

However, she has recently been painting these same female archetypes poolside in Palm Springs. Lounging in and around swimming pools at such iconic mid-century modern homes as The Kaufmann House, Donald Wexler Homes, The Frey House, The Edris House and The Sinatra House. Long late afternoon shadows, palm springs mountains in the distance, the refracted light from swimming pools…and these, these are terrific. These paintings are what really appeal to me.

This month for 2017 Modernism Week in Palm Springs, several of these works are on view at the Haya Modern Art Gallery (formerly Smith Vargas Fine Art) . 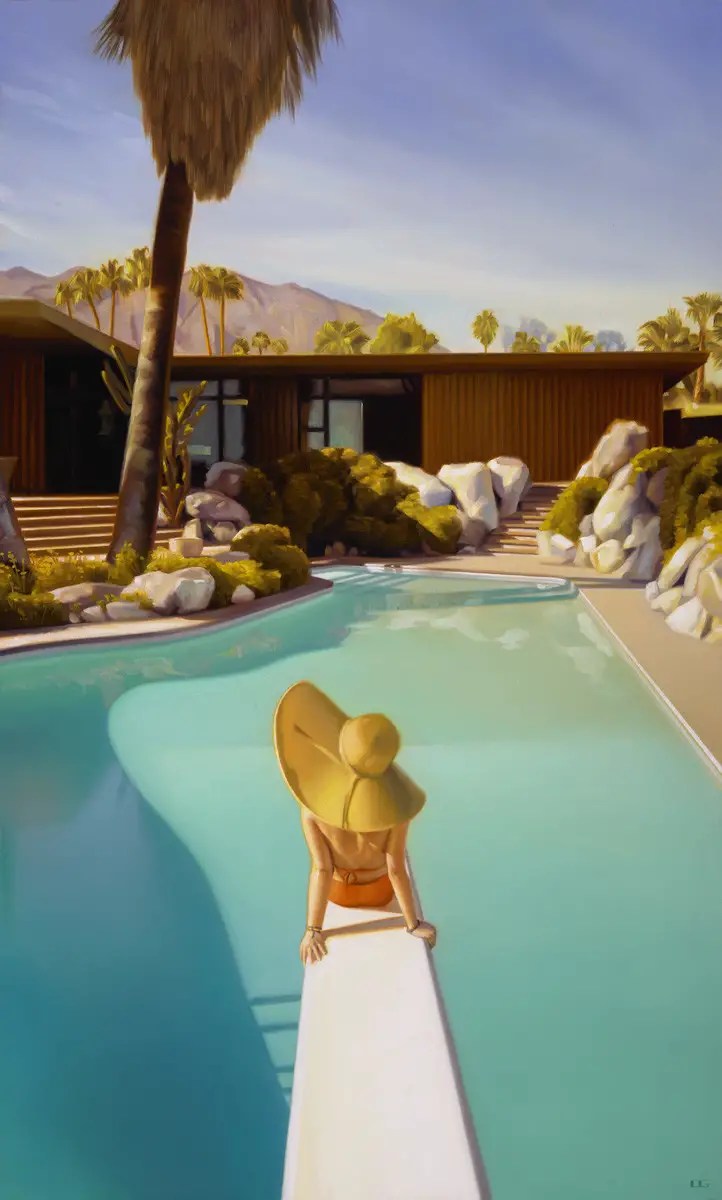 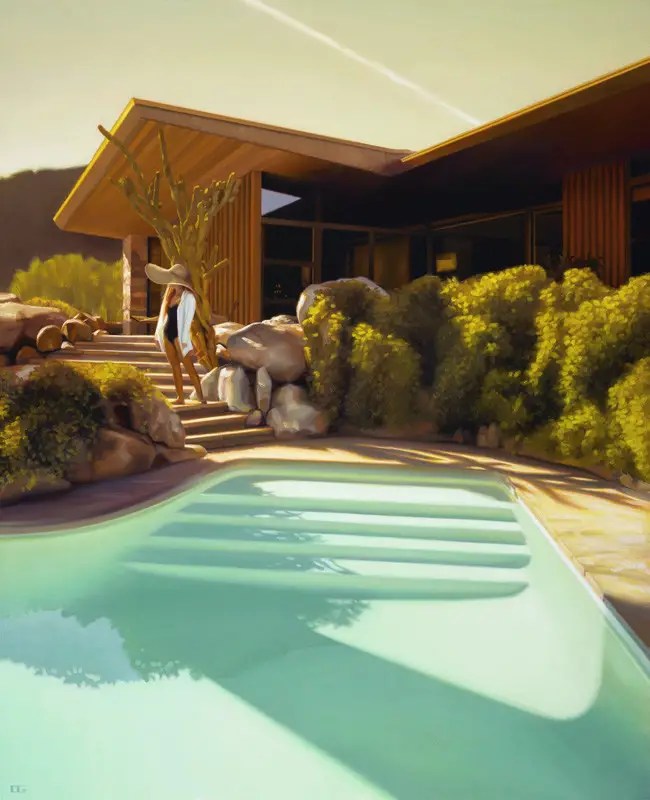 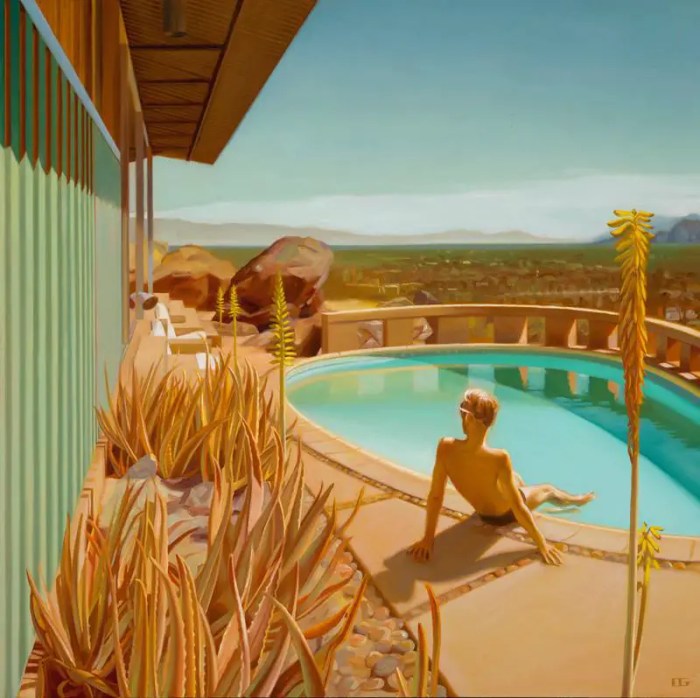 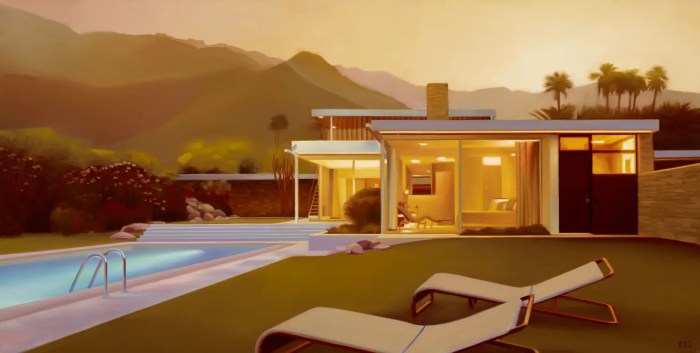 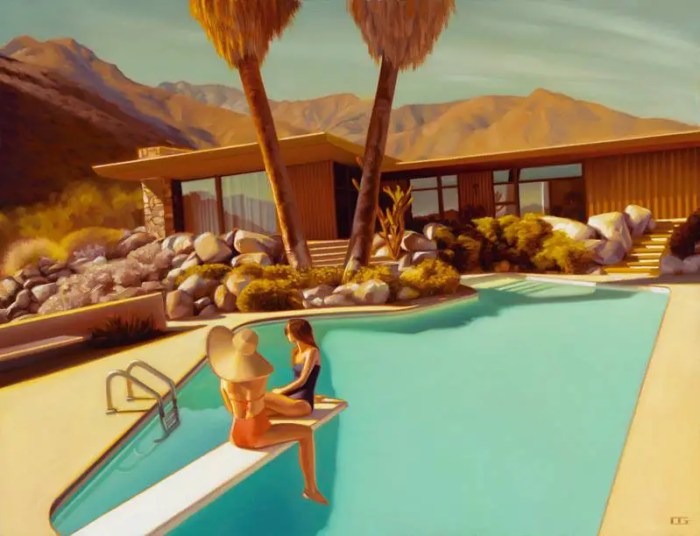 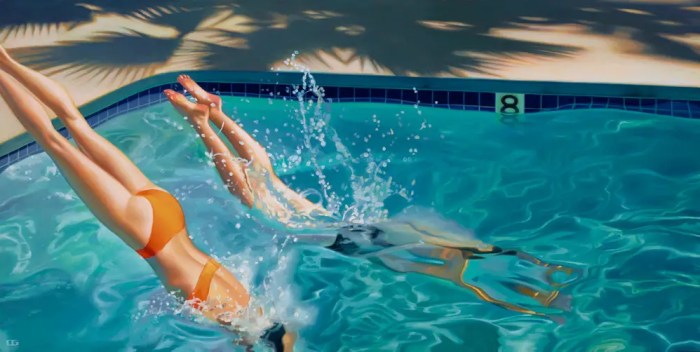 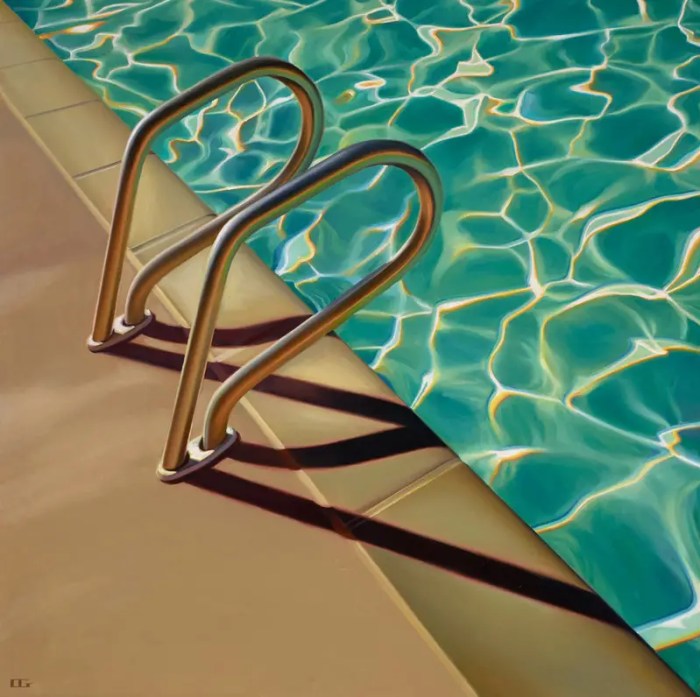 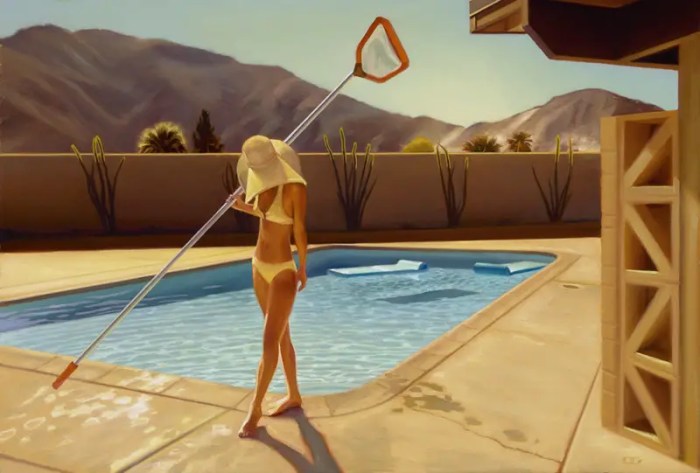 Several of these originals have already sold, but Signed and numbered glicees on stretched canvas of the above paintings are available here at Chloe Gallery. 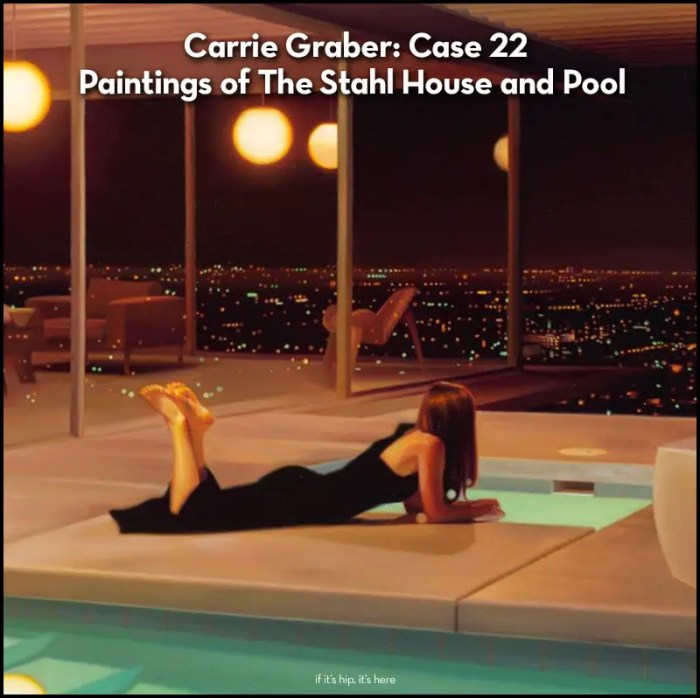 Carrie has so much work of which we are fans, we decided to feature them in another post. Her series “Case #22 -Paintings of The Stahl House and Pool” are fabulous. Be sure to see those here Carrie had the pleasure of growing up in Southern California, hot summers and warm glowing colors forever romanticized their way into her work. She is a master genre painter of the Southern California contemporary school, whose depictions of light place her in the line of the Luminists. Graber is also in the line of The Hudson River School – 19th-century and early 20th-century painters from the Northeast and Midwest, whose paintings are grounded in capturing the light effects of the sun and nature in dramatic landscapes. Though this movement specialized in anything but genre pictures, Graber mixes this 19th-century fascination with light with her own Pop iconography in the tradition of post-Modern hybridizing. Indeed, the light of SoCal is so different than that of other regions, Graber does a service to the Luminist and Hudson River traditions, with her golden-white light of the skies there, executed so faithfully and fluidly. To top it off, her renditions of the world-famous Southern California lifestyle, as Pop art, are gemlike, sexy, and exacting.

She graduated with distinction, in the fall of 1997 from Art Center College of Design where she studied with such luminaries as Burne Hogarth, Harry Carmean and Richard Bunkall. Shortly thereafter, she took a position as an artist apprentice with the famous Romantic Impressionist Aldo Luongo. A short year later, Aldo sponsored her to develop a body of her own work. Carrie’s first opening was in coastal Cambria, California in 1999, and a success. For the next decade, Carrie traveled the world, showing exquisitely developed oil paintings and charcoal drawings. Her admiration for figure and form, juxtaposed with observations of light and shadow and steeped in a fascination with composition materialized in hundreds of paintings.

She has become a collector of modern works, is now a furniture designer and builder and is an ardent advocate of architectural preservation. She volunteers at The Institute for Survival Through Design and works with American architect Dion Neutra on art projects, book readings and public relations.

“I think that it’s important for me to realize that things are coming together — skill, observation, and consideration. As an artist, I pursue what will give me the greatest satisfaction and joy, a communication filled with discovery and triumph. What’s in a medium? What’s in a subject matter, or style? I am currently studying the concept of beauty, and why we find something so. What is preconceived, and what can be edited? I always knew, and now fully realize that function always takes a form, not as a conquest but as a lover. I appreciate the opportunity to exhibit this intimate process itself as the art.”

Coming out of Southern California, Carrie Graber is considered to be among the most talented, exciting and well-collected artists in the market today. With her warm tones and exquisite control of illumination creating a perfect composition of light and contrast, Carrie captures the beauty and subtlety of familiar environments, which are often overlooked. Her soft, realistic but also bold approach warms the viewers’ senses and creates a feeling of intimacy. This is the link between Carrie and one of her main influences, Dutch master painter Vermeer. (courtesy of Chloe Gallery)