` Philippe Tournaire for S.T. Dupont - If It's Hip, It's Here
Skip to content 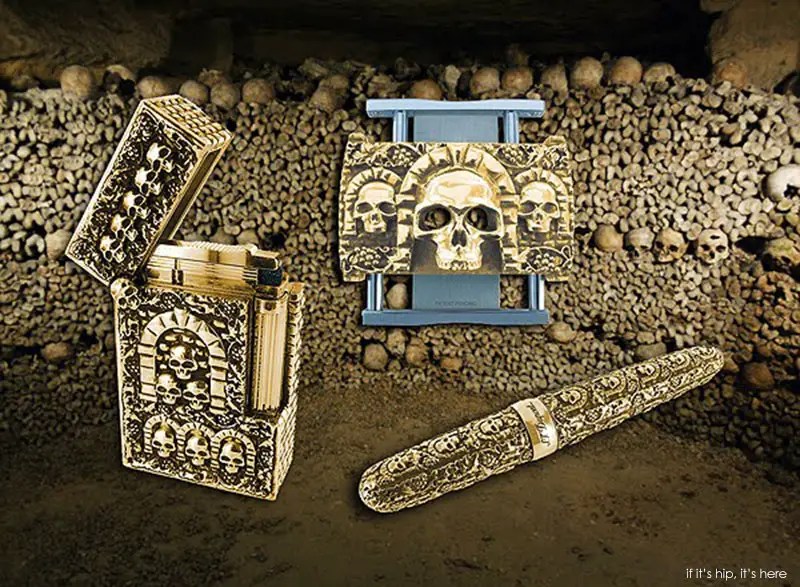 The Catacombs Limited Edition Collections by Philippe Tournaire for S.T. Dupont in bronze and the new 2012 Catacombs Black Diamond collection consist of fountain pens, lighters, cigar cutters, cuff links and ashtrays inspired by the Paris Catacombs and their dual symbolism. The french jeweller has designed these limited editions especially for S.T.Dupont, dedicated to this morbid underground side to architecture. A little history first: The Catacombs of Paris, created in the late 18th century, refer to an underground ossuary holding the remains of about 6 million people.

In the beginning of the 10th century, many parish cemeteries became overcrowded because of a rapidly growing population. During the 12th century, the city opened a central burial ground named Saints Innocents Cemetery. But a few centuries later the cemetery became saturated and sanitary conditions were absolutely unbearable.

The idea to use empty undergrounds on the outskirts of the city was launched in the late 18th century. All the dead were then transferred to the place named Denfert-Rochereau today. The Catacombes of Paris have been opened to the public since the 19th century. They attracts many visitors, curious to discover the obscure and narrow galleries decorated with bones. Following the success of the 2011 release of the Philippe Tournaire for S.T. Dupont Catacombs cast in bronze) shown later in this post); Philippe Tournaire will be releasing the series in Sterling Silver embellished with black diamonds. Only ten pieces of each item will be released this Fall 2012. All are cast in solid sterling silver and finished with black diamonds. Catacombes Collection (Bronze)
Shaping, engraving, finishing and patinating the Tournaire and St. Dupont collections required no less than 70 hours’ work. The bronze editions are limited to 66 copies per object, a divine, sacred number.

The beautiful cigar ashtray seems to be available only in the bronze: You can purchase the bronze Catacombes collection here.

Catacombes Guitar /Hard Rock version
The Hard Rock or Guitar version of the Catacombes lighter and fountain pen weremade exclusively for the US and is limited to 31 pieces. Sculpted in bronze and cast in silvertone: For nearly 140 years, S.T. Dupont has been successfully creating exceptional pieces that have won over the world’s most powerful people, as well as aesthetes and enthusiasts of fine craftsmanship.

For over 40 years, artist/jeweller Philippe Tournaire has been creating pieces that combine architecture and high end jewellery.