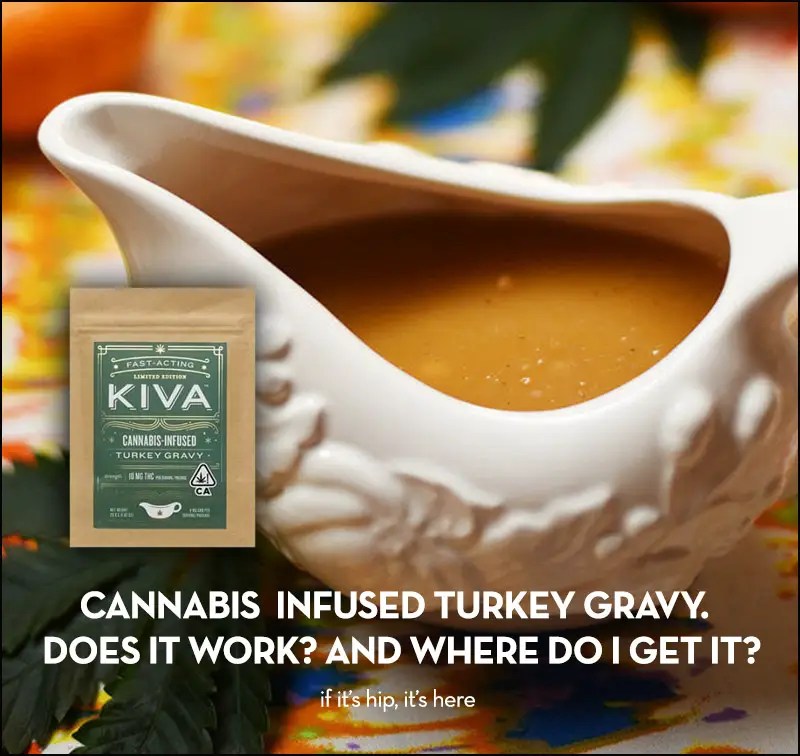 Sneak this cannabis-infused turkey gravy into your family’s Thanksgiving Dinner and watch the family dynamics change. Instead of being drilled as to whether or not you are gainfully employed, in a relationship or have gotten knocked up yet, all you’ll have to answer is “when are we cutting the pie?” One of the largest cannabis edibles brands, Kiva Confections, has introduced a new limited-edition, cannabis-infused Turkey Gravy just in time for Thanksgiving. And not just of the CBD-infused variety. This contains THC. The product is getting tons of buzz, pun intended. But how does it taste? Does it work? And most importantly, where can I get it?

You may not know this but the average THC-infused edible takes approximately 2 hours to feel the euphoric effects. Said to be “fast-acting” due to a technology that allows for faster THC absorption, Kiva claims you’ll feel the effects in just under 15 minutes.

The single-serve gravy comes in a a packet and is infused with 10mg of THC. It uses traditional Thanksgiving ingredients like turkey stock, salt, onion and garlic, for the familiar taste with an uncommon ingredient- cannabis. You make it like you would any other packaged gravy. Simply whisk the gravy powder with one cup of water in a saucepan, bring to a boil, and stir occasionally to achieve your desired level of thickness.

Gravy is made with cutting-edge technology that bypasses edibles’ normally lengthy trip through the liver, instead absorbing into the soft tissue and stomach. This allows the cannabinoids to take effect in a groundbreaking 2 to 15 minutes. Most other companies who have explored fast-acting technology have employed nanotechnology particles to speed up the process. While the nano molecules used in these edibles are small, they are massive compared to the individually-encapsulated molecules used in this approach. Not only are they isolated from other molecules they might interact with, they are small enough to be absorbed directly into the body’s endocannabinoid receptors- one molecule at a time. As a result, Kiva’s gravy offers one of the fastest-acting and most bioavailable cannabinoids available in edibles today.

The effect?
According to Lara Parker, the stuff works.

And, according to KIVA, they will be officially launching this fast-acting technology in December with a cannabis-infused premium hot cocoa for the holiday season.

Unable to find it? Make your own, there are a slew of recipes out there. Here’s one. https://www.cannadish.net/cannabis-infused-turkey-gravy/

If you’d like an entire Mary Jane Thanksgiving, check out the slew of recipes by Cannabis Cheri here.

Soup For Sluts and Other Rad Ramen Noodles

VapRwear: Hoodies And Jackets That Get You High.