` The Butterfly House in Singapore - If It's Hip, It's Here
Skip to content Given that it’s one of the most unusual modern homes in Singapore, it’s not easy to find images of 11 White House Park – also known as The Butterfly House. Designed by architect Peng Beng Khoo of Arc Studio Architecture + Urbanism, the home isn’t even on the company’s website. Situated along the affluent, palm-lined street of White House Park at Bukit Timah sits a gleaming, intriguing-looking puzzle of a house. Number 11 White House Park in Singapore’s District 10 was created to resemble a futuristic butterfly perched on a tower of lily pads. The insect’s body is the house’s spiralling, light-filled spine and its wings are the five crystalline pods that fan out over large terraces. Or, as the owner prefers to see it (he is chief executive of a large Singapore-based bank), “a spaceship that has landed in the neighbourhood, but with rectilinear rooms”. When the architect Peng Beng Khoo was commissioned to build the new spaceship-like residence – a two-year project completed in late 2012 – he was immediately fascinated by the contradiction the brief presented. “The husband loved more definite geometries and organization, while his wife was attracted to free and fluid lines and curves,” says Khoo, co-founder, with his wife Belinda Huang of ARC Studio. “We embarked on creating a house that was architecturally expressive and yet had clean and regular rooms.” Khoo describes the house’s “two geometries” – the triangulated crystal-like pods, the living areas for sleeping, eating, relaxing, etc, and the curvaceous expanses, such as the sweeping staircase and other “circulation spaces” – as blending together seamlessly. “One important idea we were expressing was that of unity,” he says. “It’s about two coming together to become one – to express through architecture how our clients, as a couple, are united even though as individuals they are so different.” To achieve this, another seamless partnership was required – between architect and engineer. 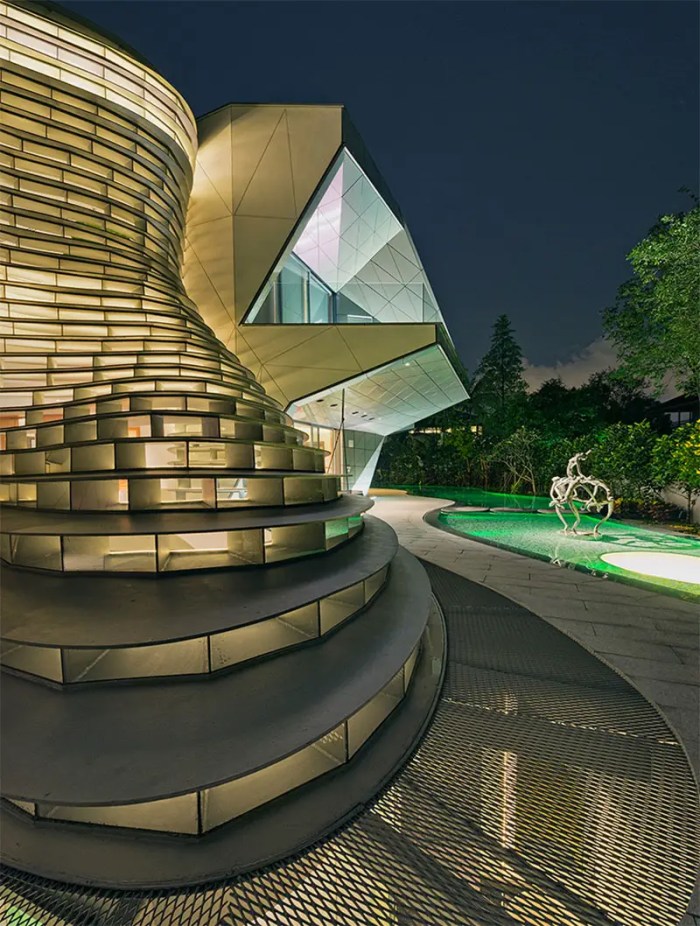 Khoo likes his designs to emerge organically, rather than starting a project with a fixed form in mind. So he teamed up with London-based structural engineering consultancy Web Structures. 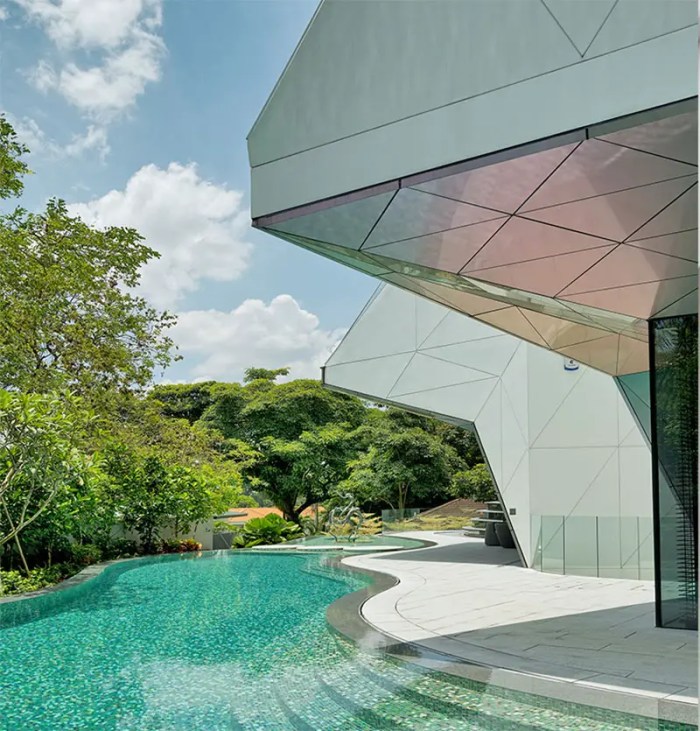 Rezai – who has a philosophy of “whatever the engineering textbook says don’t do, we do” – is the man Norman Foster and Richard Rogers sometimes turn to when they have a project with a sticky engineering problem.

“It’s about two coming together to become one – to express through architecture how our clients, as a couple, are united even though as individuals they are so different” – Peng Beng Khoo

The aim for the 12,000 sq ft property was to turn a series of unusual shapes into “a house that was ingenious, buildable and cost-effective. We saw how the two different geometries and architectural forms came together in a cohesive whole – just like how a couple would move together as they danced.” Rezai, who specializes in designing tall buildings in earthquake zones and extreme climate conditions, sees his role as melding two conflicting ends of the building spectrum – “design sensitivity and cost efficiency”. And he calls this process of finding the happy medium “fusion engineering”. 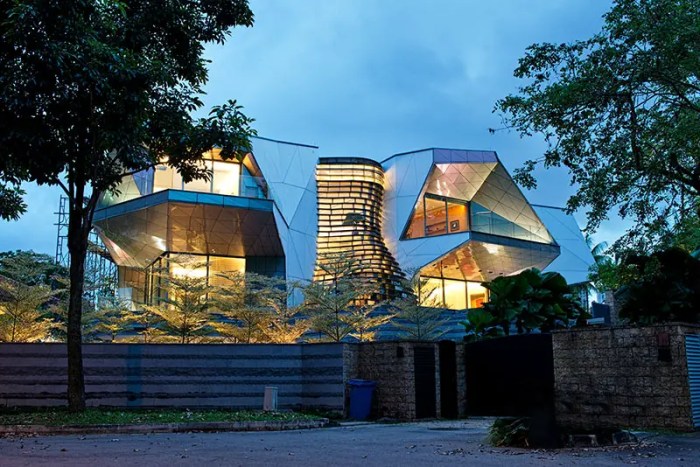 “There is a traditional belief that more design means more cost, and less money means less design,” he says. “We are showing, through a track record of real projects, that this doesn’t have to be the case. With 11 White House Park, the free and organic form of the architecture doesn’t lend itself to the ordinary orthogonal grids usually used in the industry to define the various spaces. We set out to develop a structure that is defined with its nodes in three dimensions.” The building’s unusual form demanded painstaking attention to detail. Every piece of granite, tile and glass needed a template before it could be cut. Every piece of aluminum cladding was custom-made and the curvilinear staircase laser-cut from thick pieces of steel, welded together and hand-polished. 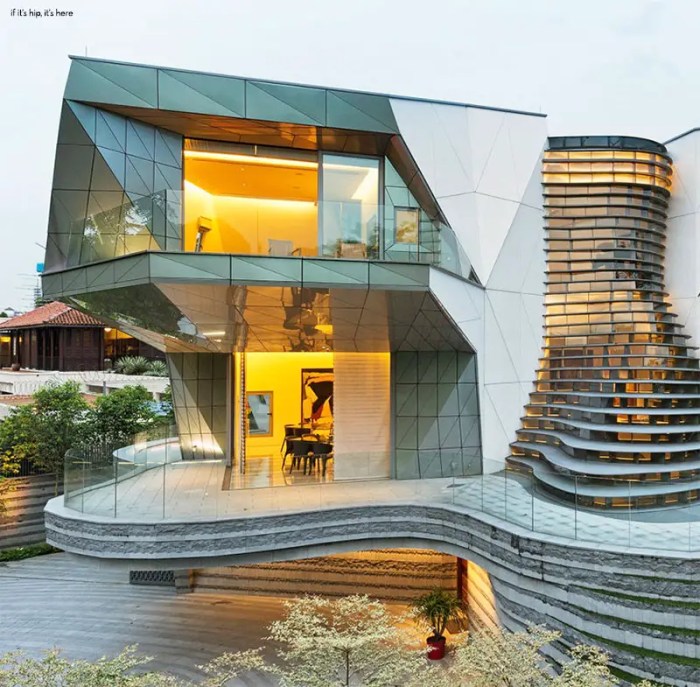 “Every component of the house was customized, down to the door handles,” says Khoo. “Landed houses”, such as this, are rare in Singapore, accounting for just five per cent of the housing stock, with the bulk dominated by affordable Housing Development Board apartments. As land is scarce, the few houses that do exist typically come on relatively small plots that afford little privacy – so the city’s high-end, contemporary homes are often designed as inward-looking open-plan spaces with sliding glass panels that open up to gardens or courtyards with pools. “The traditional Singaporean architectural style is a bit of traditional British, such as classic Palladian, with a bit of Chinese influence,” says Chan. “But once Singapore became independent, resources were so poor that it was dependent on importing services and ideas and encouraging foreign talent to come in. And that’s still the case. “For architects, it’s a very contemporary, international and progressive place to work. Many, like me, study or work overseas, then return to adapt the foreign influences they have acquired to the Asian culture, climate and how people live.”

The ingenuity of fusion engineering means couples with conflicting architectural tastes, such as the owners of 11 White House Park, can still build their ideal home together. And such projects are becoming more common. “Singapore is fast-becoming a choice destination for wealthy individuals to build evermore expensive homes as an opportunity to express themselves,” says Peng Beng Khoo. “For well-heeled homeowners here, the act of creating their own home is the highest form of luxury.”

images and information courtesy of the following:
Arc Studio

A Paragon Of Modern Organic Architecture, The Desert House by Ken Kellogg (60 Photos)