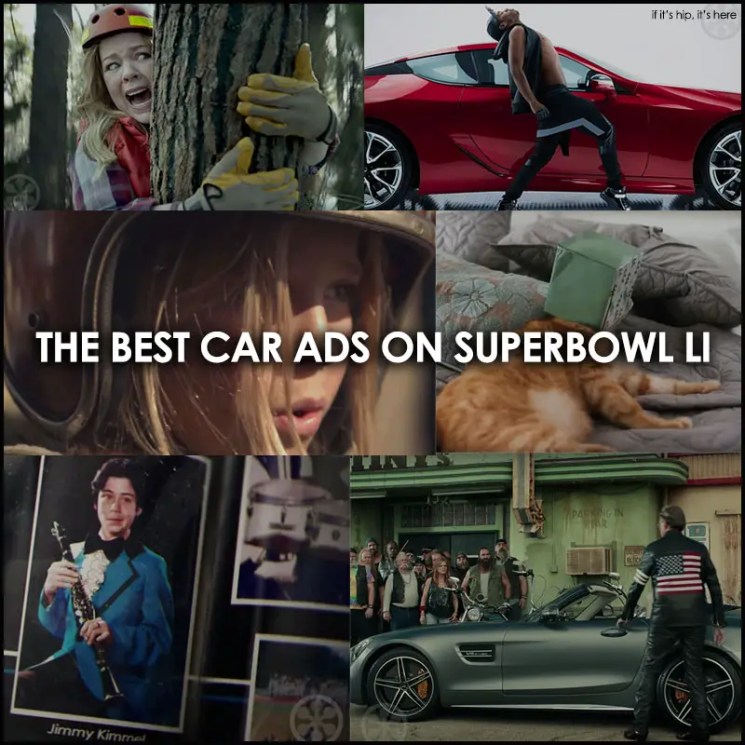 I wasn’t going to do a post on this year’s Superbowl ads, but after seeing so many good ones leaked for the automobile industry, I couldn’t stop myself. Several of this year’s car ads for the Championship game are well-directed, well-cast commercials that are too good to miss while taking a pee-break.

UPDATE: As is typical, the spots have been subsequently been removed from YouTube, but the names and the credits are still shown here to remind you of the advertising work on Superbowl 51 that excelled that year

1. Destined to be a fan favorite, the new campaign by agency David&Goliath for the 2017 Kia Niro starring Melissa McCarthy as an Eco-Warrior, is kicked off in the third quarter with the hilarious minute long “Hero’s Journey” :

The Kia campaign has several equally charming 10 second spots to point out the car’s features. Here’s one of my favorites:

2. Directed by The Coen brothers, the Mercedes-AMG GT Roadster Commercial “Easy Driver,” nails its target- the baby boomer. The minute long spot is beautifully shot with impeccable casting, set direction, an appearance by the still incredibly handsome Peter Fonda and is set to Steppenwolf’s “Born to Be Wild” (the only choice on the jukebox). And that car doesn’t suck either. From agency Merkley + Partners:

3. This minute long extended cut of the 2017 Lexus LC Commercial “Man and Machine” from agency Team One is a stylish music video that equally shows off gorgeous sheet metal and the jookin moves of Lil’ Buck. Directed by Swedish director Jonas Akerlund. The soundtrack is “Move Your Body” by Sia. Actress Minnie Driver provides the voiceover:

4. The Audi Big Game Commercial “Daughter” by agency Venables Bell & Partners, in which the father contemplates whether his daughter’s worth will be measured by her gender through a series of provocative questions, has proven to be very divisive eliciting much blowback from the Conservative Right.

Worth noting is Audi’s 3 minute “Toy Story Let’s Change The Game” from Venables Bell & Partners. The spot, released a month ago also refers to gender equality and has a Barbie-like doll choosing an Audi R8 after her carriage breaks down:

5. While the Honda CR-V 2017 Big Game Commercial “Yearbooks” from agency RPA is less about the car and more about chasing dreams, their use of a star-studded cast and special effects is sure to get it noticed:

6. Ford’s 90 second “Go Further” Superbowl ad from GTB is one of those spots that’s really great until you get to the ‘solution’ part, when it weakens a little. The first Ford Superbowl ad NOT to focus on cars, it was created to show off Ford’s development of “long-term mobility solutions”

The first minute is filled with beautifully shot funny and familiar scenes of everyday examples of getting “stuck.” Then, at minute one Ford comes in as the hero, showing you the multiple ways they help get you through life (ride sharing, bike sharing, self driving cars, electric vehicles and future technology). A little crammed at the back end, it’s still a nice spot.

Other car ads during the game include this one from Buick, by Publicis Groupe’s EngageM-1, which isn’t worth watching -even with the Miranda Kerr cameo at the end.

Hyundai will run a 90-second ad, which the automaker is calling a documentary. The ad is to be shot during the game and will air in the so-called “post-gun” slot – immediately after the game ends but before the trophy ceremony.

Cadillac, who recently released this “Series of Short Journeys” filmed by Sam De Jong, does not seem to be advertising during the Championship game this year.

Toyota, Chrysler/ Fiat, Dodge and Jeep also seem to be sitting out the game this year.

There. Now you can empty your bladder during the commercials like you’re supposed to.

The Hennessey Venom GT Nabs The Title Of The World’s Fastest Production Car – For Now.