` Inside Antti Lovag's Renovated Maison Bernard - If It's Hip, It's Here
Skip to content

Hungarian architect Antti Lovag (1920-2014), a self-defined “habitologist” is best known for the “Bubble Palace” (Palais Bulles) a 1,200 square meter compound with 10 bedroom suites, a 500-seat amphitheater and multiple gardens and swimming pools. Completed in 1989, and located in Cannes, the Bubble Palace is for sale and has been unable to find a buyer since it was listed on the market in 2015.

Antti Lovag’s Maison Bernard, an earlier Bubble House, was built prior to that and after undergoing a five year renovation, has a vibrantly color-coded interior and allows visitors to tour the space in small groups. Maison Bernard also offers an Artist in Residence program with equally unique architectural accommodations.

Lovag arrived in France in the late 1940s and gained his initial experience with Jean Prouvé. In the 1960s, he worked with Jacques Couëlle, one of the first architects to develop an organic architecture style in France.

In the early 1970s, he began the construction of the “Bubble House” for Pierre Bernard in the south of France, implementing his radical and innovative housing design.

Antti Lovag lived on-site during the building process. After studying the nature and characteristics of the terrain, he began with an iron re-bar network that enabled him to visualize the interior spaces and define the openings to the sky, the sea or landscapes. He then cast a layer of concrete over this metal template.

The Bernard House was practically completed at the end of the 1970s. Designed as a family home, it includes a set of shared living areas and private spaces dedicated to each of the four family members. This is one of three emblematic Antti Lovag architectural achievements and is generally considered the most perfectly completed. French architect Odile Decq was hired to renovate Maison Bernard. Working closely with Pierre’s daughter Isabelle, and the project took five years. At first she had to become acclimated to Antti Lovag’s architectural style and then decided to use color to structure her renovation of the house.

The concept of “too much is never enough” became the color leitmotif. The rooms are approriately titled Pink Room, Orange Room, Green Room, Colorful Room, and for some reason, the Guest Room. 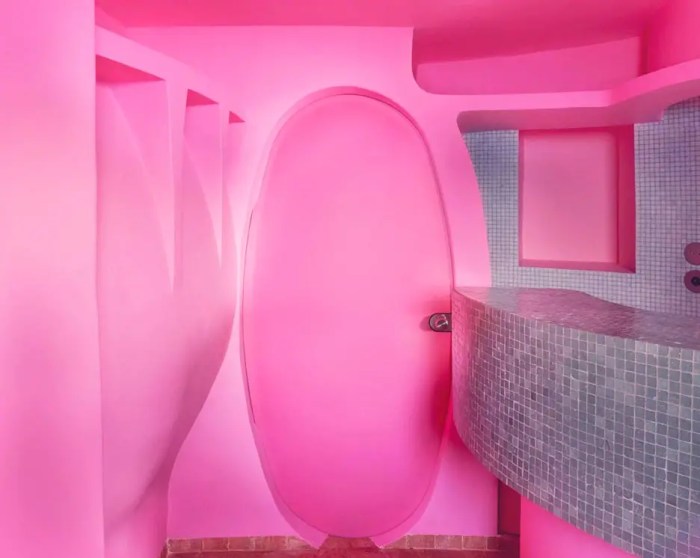 Decq’s approach to the renovation is a faithful continuation of Lovag’s original architecture. Her work spanned not only a careful use of her own colour palette, but also included the creation of new spaces at some specific places of the house, such as four new bathrooms and a laundry room. Following the house heritage of organic forms, these spaces were sculpted right into the rock and seamless merged to the curvaceous surfaces. Using the same principle, she also triggered the improvement and updating of the existing rooms thanks to the integration of fittings into the walls as well as some furniture adapted to the forms in the space. 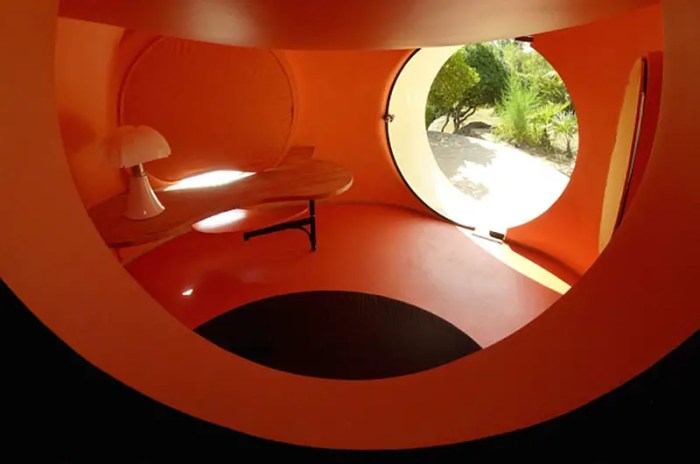 Starting with the exterior of the Maison Bernard, Decq designed some outdoor furniture and renewed the red-brown paint of the exterior, which echoes the tone of the rocky site. Once inside, work continued with the living room, a guest room and the entrance bathroom. A year later they renovated Pierre Bernard’s bedroom, an important step because of its iconic character. Decq default choices are black and scarlet, so she had a solid base on which to build, and she constantly asked her clients for their colour preferences. Isabelle chose pink and purple shades for her part of the residence, her brother orange, and a flashy and strong colour. Finally, for the last room, they synthesized with the use of all the other colors of the house. Like a rainbow from east to west, following the sun path through space. Most of the craftsmen who worked on the building site had already worked with Antti Lovag. Their expertise helped to resolve the many challenges which cropped up during the renovation. 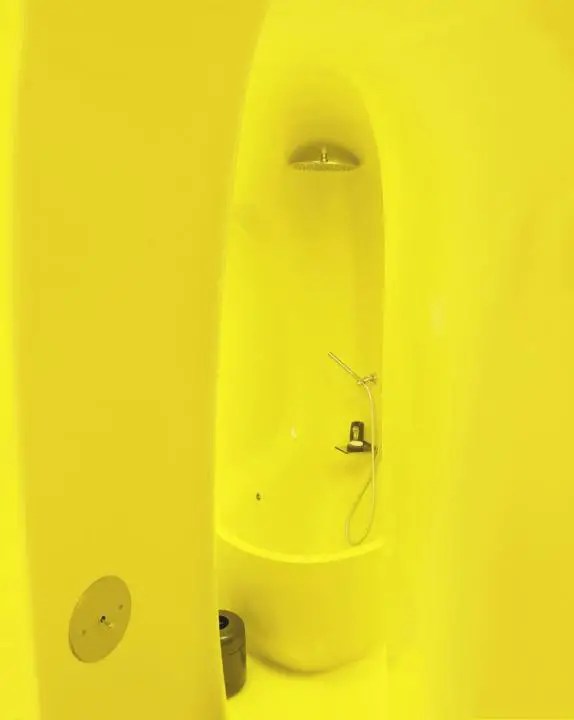 Other than the work on colour, Decq also designed round beds and other furniture that would make use of the hemispheric rooms and create an integrated whole. A hippy encampment was transformed into a stylish but casual beach house, and the housekeeper’s bubble is now occupied by an artist in residence.

The Artist in Residence Program To perpetuate its openness to creativity, each year the Maison Bernard endowment fund welcomes an artist in residence for a maximum six-month stay. The selected artist must create an original work in relation to the house architecture and its natural environment. The artists receive a scholarship and are housed in the independent living quarters and adjacent workshop created in the 1970s by Antti Lovag for his own use. These accommodations, renovated in the Spring of 2014, provide a space of about 90 square meters (970 square feet) overlooking the Mediterranean sea. Artists may also have access to additional space dedicated to the manufacture of their work. See some of the past projects by Artists in Residence here

Visiting Maison Bernard
The Maison Bernard is now open to public visits by appointment for groups of eight people maximum. The visits focus on the most representative areas of the House and aim to promote a better understanding of Antti Lovag’s architecture.

Bavarian HI-MACS House is A Vision In White, Indoors and Out.