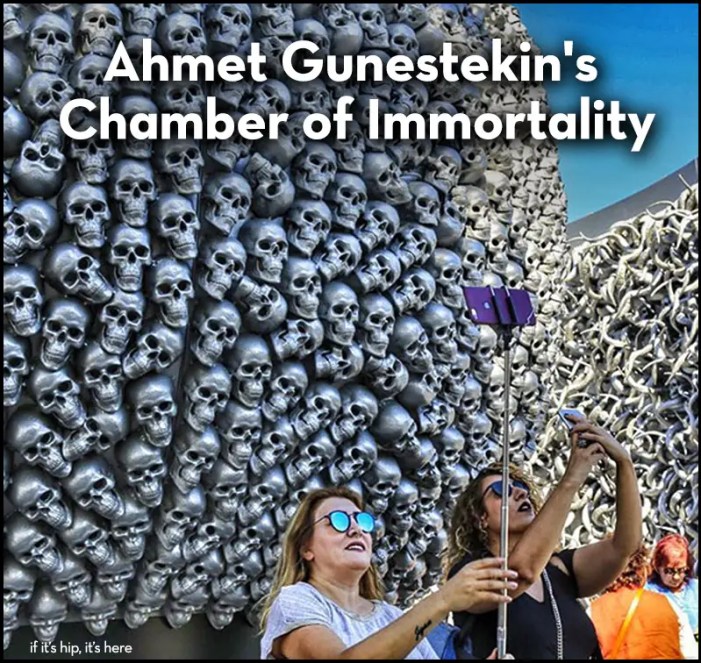 When it comes to taking selfies, Turkish artist Ahmet Gunestekin’s Chamber of Immortality, a large art installation inspired by historical poems and biblical stories, makes for one of the best and most popular backdrops for Instagram. One look at the installation and you’ll see why.

Inspired by a cluster of huge stone pillars decorated with strange carvings found in Gobekli Tepe (which also happens to be the archaeological site prominently featured in the Netflix series The Gift), Gunestekin’s Chamber of Immortality made its debut in 2018 at Contemporary Istanbul, an annual art fair. The installation then traveled to London, Berlin and New York. 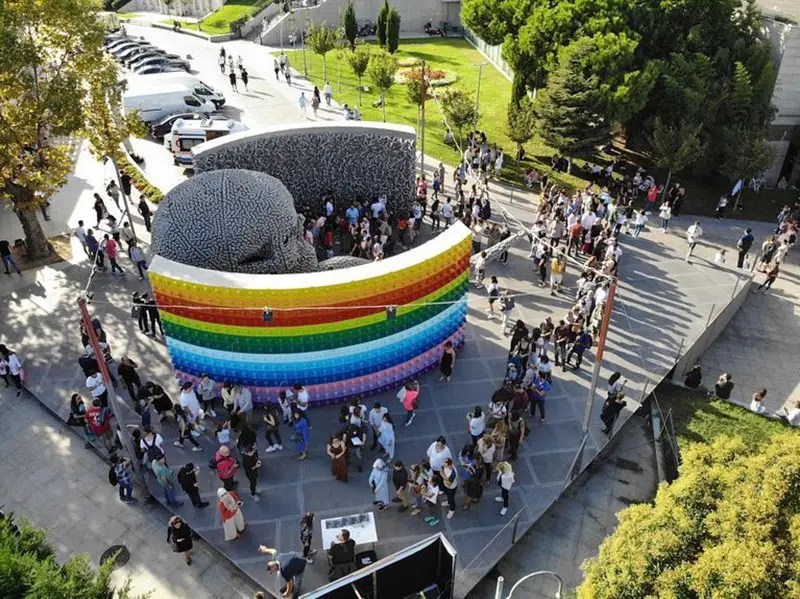 Gunestekin’s eye-popping piece draws on the myth of floods from both the ancient Mesopotamian poem as well as the biblical story. The artist says his work draws on the Epic of Gilgamesh – the Sumerian king who spent his life trying to find the secret of everlasting life, and on the closely related Biblical story of Noah, whose ark some believe landed on Mount Ararat, Turkey’s highest peak.

Gunestekin’s Chamber of Immortality took four and a half years to make and cost $4 million. 11,000 small hand-crafted skulls to make up the installation’s centerpiece, a single giant skull with a twisted animal horn protruding from its mouth. 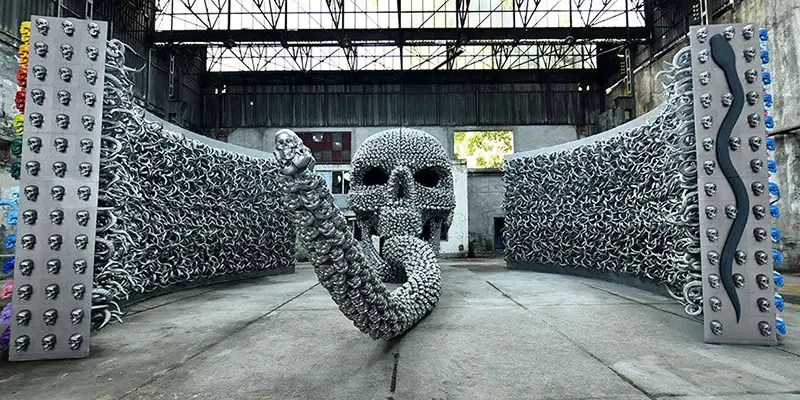 The large skull represents Noah, while the tongue-like horn that spills from its mouth represents animals, Gunestekin said. Around the giant skull sit two large curved walls. The exterior facing wall is brightly colored in contrast to the monochromatic interior side. The outside walls are embellished with small skulls, some of which sprout animal horns from their ears, temples and mouths. The inside-facing walls are a mass of twisted horns and skulls. 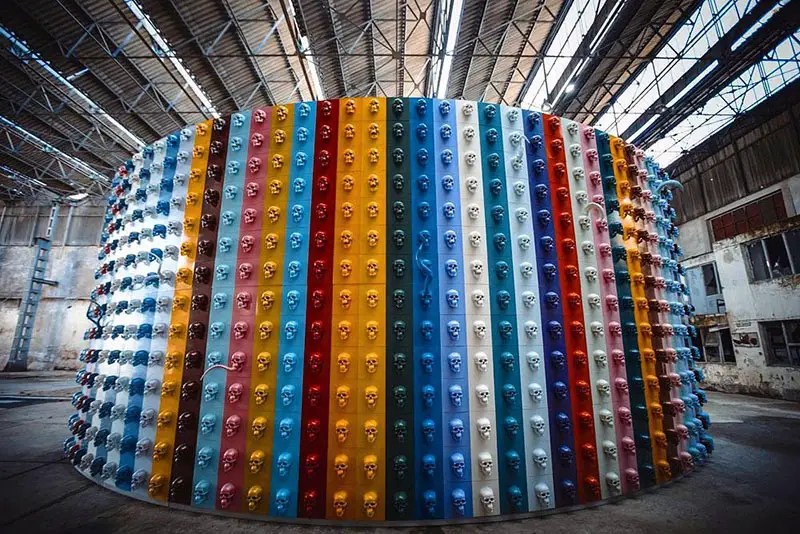 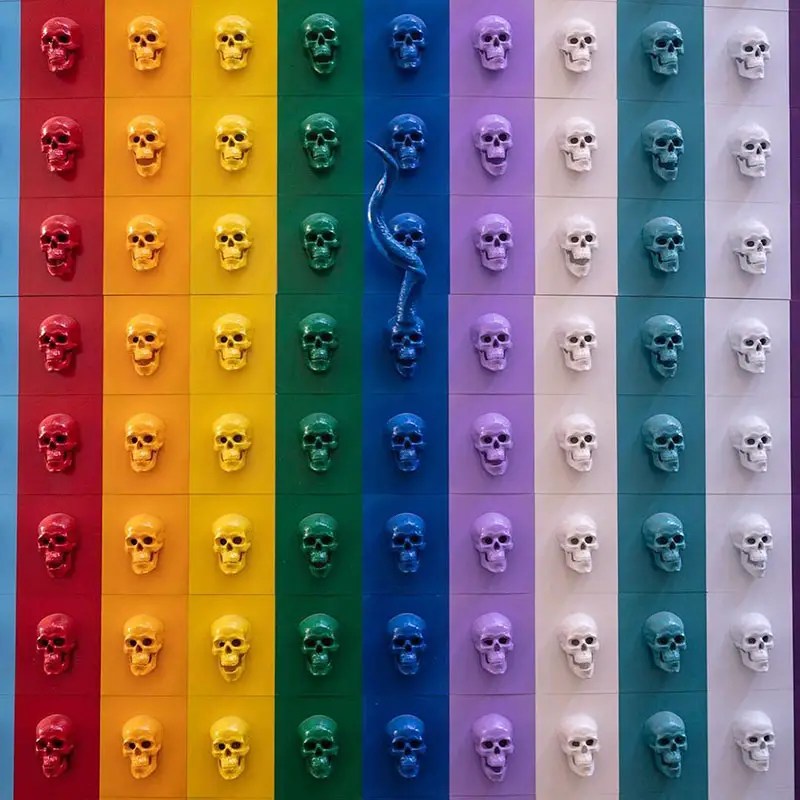 The original press release from Marlborough Gallery below goes into much greater detail regarding the artist’s inspiration and relativity to the Epic of Gilgamesh and Noah’s ark. 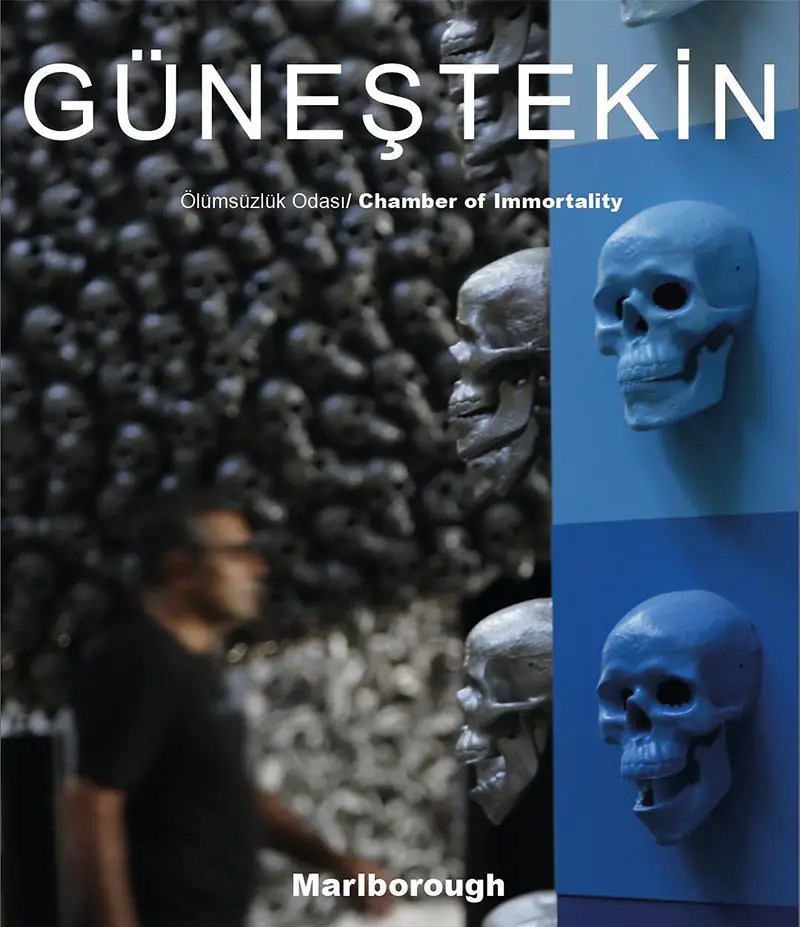 The original press release from Marlborough Gallery
Marlborough Gallery will present Chamber of Immortality by Güneştekin in the 13th edition of Contemporary Istanbul between 20-23 September, 2018. Chamber of Immortality, supported by Fettah Tamince and Tersane Istanbul, offers a creative poetic compendium of the artist’s universe. The work will be shown outdoors and the paints of the installation are provided by Jotun Turkey.

Güneştekin began conceptualizing the installation after a cluster of huge stone pillars decorated with strange carvings are founded in Gobekli Tepe. Since then he has been articulating his concepts and only a year ago he has begun installing Chamber of Immortality.

Güneştekin construes his own views exploring the semantic and the morphological space of the discoveries excavated in Göbekli Tepe. He interprets the imagery of these finds associating them to the mythos in his memories. Most richly adorned monoliths excavated feature scenes from founding myths. Güneştekin interprets these scenes and suggests that the animal engravings on the monoliths and the narrative structure overlap with the ancient flood story of Noah. He constructs his colossal installation on these arguments.

The narrative signifies the epic encounter of Gilgamesh with the immortal Utanapishti, who survives the great flood long ago in human history when the gods resolve to wipe out mankind. Gilgamesh makes a long journey to the ends of the earth in search of immortality and returns exhausted, not with the object of his quest but with the words of wisdom from a primeval time. It is a 4000 years old Babylonian narrative poem that today we call the Epic of Gilgamesh. Gilgamesh seeks the secret of immortality. The poem tells the human condition. Chamber of Immortality is Güneştekin’s way of showing how this universal theme of searching has profound influence on modern cultures.

The engravings on the monoliths signify the intricate forms and unearth an intriguing iconography. The archeologists suggest that these T-pillars, the monoliths excavated in the enclosures are the anthropomorphic creatures and might be the first evidence of the belief the archaic people embrace, that they are being created in the image of the gods. However, Güneştekin thinks that the engravings carved out on the monoliths represent a specific semantic world and this world is profoundly associated with the ancient mythologies. So he begins to form Chamber of Immortality by imagining these intricate forms.

Güneştekin suggests that the megalithic structure is the religious space of the archaic people in which they worship the sun. He imagines that each monolith represents a human because of their morphology, and the act of worship occurs around these pillars. For the artist who believes that the birth of religions is always related to the sun, these structures, designed in the form of sun, is potentially for religious purposes. All these finds articulate Güneştekin’s concept of immortality. The connotations between the morphology of these finds excavated in Gobekli Tepe and the installation of the artist, invite the viewer to become re-creative and reconstruct the historical and poetic universe of the artist. This act of viewing creates a dialogue and Güneştekin makes this dialogue possible by using diverse media in the making of the installation.

This sort of personal chamber condenses in itself an exhaustive compendium of artist’s overall universe and reflects certain aspects of his world. Chamber of Immortality develops itself in stages and through the theme of search of immortality and the journey. All the experiences of the artist’s journey find a starting and ending point in the impressive synthesis of the installation. This synthesis involves the following fragments: the long journey of Gilgamesh to the ends of the earth in search of immortality, his return exhausted not with the object of his quest but with the words of wisdom from a primeval time, having failed in his quest that Utnapishtim sends him on his way home. Another fragment of his synthesis is the people who live in the houses without doors and worship the sun to whom Dhul al-Qarnayn comes across on the journey to the ends of the earth in search of immortality. His journey evokes the one Gilgamesh has.

There is a moment during Dhul-Qarnayn’s journey, in which he lingers on a population that catch his attention for the peculiarity of its people. Güneştekin imagines that the people Dhul-Qarnayn comes across present striking similarities with the Yazidis, an indigenous ethnic group of north Mesopotamia. The Chamber of Immortality, in the form of chamber, opens with the representation of an engraving adorning the entrance pillar of the holy temple of Yazidis in Lalish today. It is the sacred black snake who saves Noah’s ark in their universe of thought. The ark is damaged because of the great flood by the gods who intend to wipe put humanity, all the animals start escaping, the snake covers the hole of the ark with his body, and saves the ark, thus humanity. The engravings of the animals on the t-pillars in Gobekli Tepe, evoke the animal pantheon in Noah’s ark and the snake is the one most carved out among them. It supports the interpretation of the artist that the story told on the monoliths by the archaic people of the late ice age in Göbekli Tepe is actually the flood story that we all know.

The installation consists of metal skulls and horns. A huge skull is located in the center and adorned with hundred small skulls. This huge cranium in the middle represents Noah, in other words Utanapishti. The installation, in the form of a chamber consists of two huge walls facing each other. The inner-facing of the walls adorn with horns, outer-facing with craniums. The horns refer to the story of Dhul-Qarnayn. The installation is constructed in the form of a chamber, though it has without a door and a roof. This is the way of life which astonishes Dhul-Qarnayn in his journey. The installation opens with the engraving of a snake which refers to the semantic world of Yazidis. It is the snake who saves the humanity by preventing the ark sunk when the Noah’s ark damaged and all other animals begin to escape. That’s why the snake is immortal and sacred for them. And all these fragments seem separate by definition in Chamber of Immortality, but the constructs by the artist make these fragments interwoven in an intriguing ways and make a dialogue possible.

Why this particular text, 4000 years old Babylonian poem has had this profound influence on modern culture. No other ancient near eastern text has been influential on the modern world as Gilgamesh has. This Babylonian narrative poem says something about the human condition to modern individuals. This is a story about a man who went on a long journey, did everything, found out everything and then stopped. The travails of Gilgamesh, all that he went through. After all this is not a poem anymore about a hero who is glorious, a great king who undertakes heroic deeds. This is a poem about a person who went through hardship. It was an epic career of pain. He wants to avoid death, death horrifies him. And he’s driven to go on a mad quest to the ends of the earth to seek the secret of immortality.

Gilgamesh travels to the ends of the earth in a vain quest to avoid death. His vain quest can be read symbolically as the story of human life. Modern readers easily identify with Gilgamesh as individual to individual and recognize his existentialist struggle as their own. In this sense Chamber of Immortality presents a special interpretation of this human condition by Güneştekin.

An Exhibit of the World’s Most Stunning Private Pools