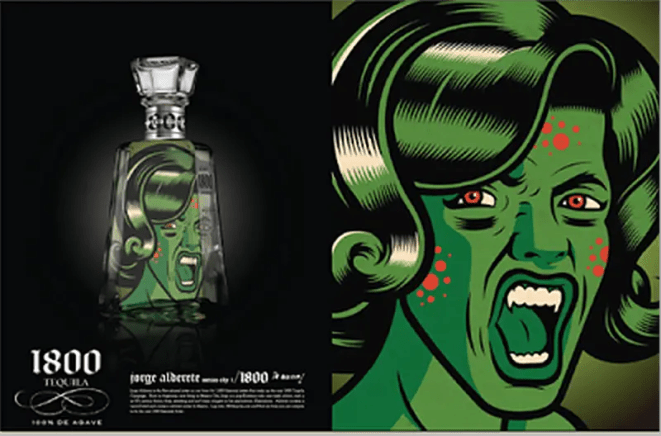 These artists and their artwork were featured as part of a national advertising campaign including print, billboards, internet, and radio, and now each piece of artwork is featured on 1800® limited edition tequila bottles, available nationwide in stores now (or online here ) 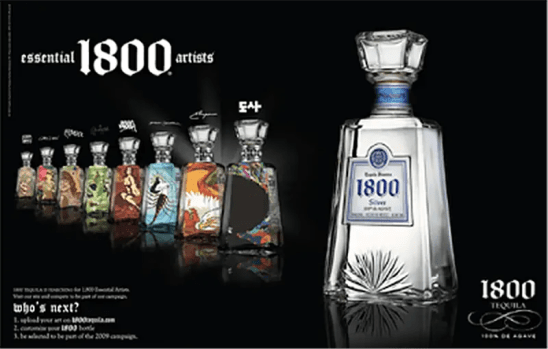 Below are the artists, their bios and their bottles from the Essential Artists collection. I have to tell you, the photos don’t do them justice. I was generously sent the Hannah Stouffer bottle shown below, and it’s just stunning! San Francisco-based illustrator and designer Hannah Stouffer constantly strives to define the term “classic” and explores how it relates to our modern attractions. She draws inspiration from traditional notions of luxury and elegance, and engages them as the basis for her work. Her self-taught design sense and style of illustration, combined with her themes of Victorian imagery, royalty and pop culture, distinguish her as a definition of classic contemporary.

Stouffer defines her illustration style as an exploration and embellishment of subcultures- and her work clearly presents that combination. The study of subcultures, their symbolism, and their unification with contrasting, unconventional imagery and decoration create the compositions in Hannah’s work. She draws inspiration from historical eras, lapsing all the way from Antiquity, through the Middle Ages, to Modern times- all the while maintaining an awareness of current attractions and tendencies. It is her skill at engaging these together that provides the basis of her work. Pop illustrator, who uses trash culture, 50’s science fiction films, wrestling and surf music imagery in his psychotronic illustrations, animations and comics. He graduated from the School of Fine Arts in the Universidad Nacional de La Plata, Argentina, as a Designer in Visual Communication.

As an independent animator, he has worked for MTV Latin America and Japan, Nickelodeon Latin America and Brazil. He has been coordinator of the animation section on the internet for MTV Latin America. Also he has been a jury of the MTV On-line Prizes 2001 (animation category) and One Show 2004 (design category) in New York. His work has been published in several specialized anthologies for example: Illustration Now (Taschen); Illusive, Pictoplasma, Los Logos, Dos Logos, Latino, Play Loud, (Die Gestalten Verlag); Place (Actar); Tatto Icon 3 (Victionary); Iconography II (idN) etc. etc.

He is the co-owner of the independent record label Isotonic Records, specialized in instrumental rock.

In 2006 he joins up with Clarisa Moura, Quique Ollervides y Cha! to open Kong, the first design store and gallery in Mexico speciailzed in international graphic design, illustration and street art. From 2006 he is the curator of the Terraza space in the Cultural Center of Spain in Mexico. In 2007, with Andres Amaya, he forms Plan B, the first Urban vinyl toy production company in Mexico. Currently he mostly works as an illustrator, for different publishing and media ventures in Argentina, Mexico, Spain, Italy, Germany, Portugal, USA, Switzerland, Finland, etc. He works in his lab at Mexico City. 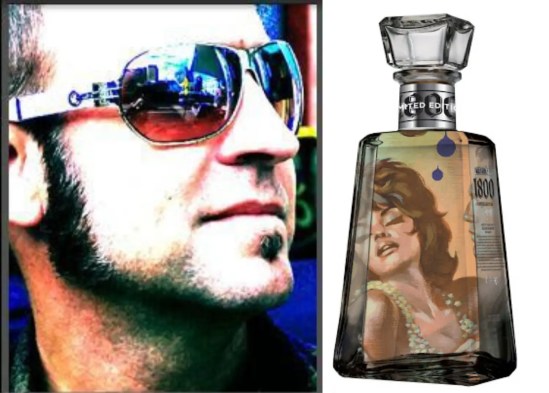 Barr is one of Detroit’s most celebrated and successful underground artists. His paintings have appeared in galleries from LA, Seattle and San Francisco to New York City, Germany and Italy. Barr’s work has been featured in a variety of comics and graphic novels from Mad, DC Comics and Paradox Press as well as in a successful series of self-published books called HEEP. Barr’s contributions to animation include background styling for The Ren and Stimpy Show, Bjork’s I Miss You video, and The New Woody Woodpecker Show to name a few. His paintings have been reproduced in the periodicals Big, Film Threat, Hi Fructose and NY Times.

The 2003 book, Lowlife Paradise: The Works of Glenn Barr, published by La Luz de Jesus Press & Last Gasp was met with great success. This book had a brother born at the same time entitled The Lowlife Companion: Selected Drawings from Glenn Barr. His latest book which is already in it’s second printing is a comprehensive collection of paintings, drawings and photographs entitled Glenn Barr’s “HAUNTED PARADISE”. This collection spans 4 years of work were the previous book left off and is also published by La Luz de Jesus & Last Gasp.

Glenn Barr’s surreal creatures, specters and tragic characters live in a seedy universe, drenched in the grit and haze of a post-apocalyptic urban dreamscape. His Detroit work has been labeled Pop Surrealism, Lowbrow, Regional, Outsider, Ashcan or as he coins the phrase “B Culture-ism”. Barr finds inspiration in the city streets as well as from pop and counter cultures that infuse a familiarity in his many parallel realities. With a nod to old master painting, pulp art, and cartooning, Barr’s paintings are mesmerizing in their narrative complexities and technical depth. Josh Ellingson relocated to the California from Flint, Michigan during the “dot com boom” of the late ’90s. Moving on from web production art, Josh found a niche in illustrating for various technology related magazines.

Today Josh Ellingson contributes to various international publications and participates in art exhibitions nation-wide. His work has been featured on everything from handheld games to custom vinyl toys. When not managing his studio in San Francisco, Josh likes to travel and sketch. He has participated in shows at Gallery1988 SF, KidRobot SF,Space Gallery, The Local 303, Studio Gallery, Super7, and The Artist X-Change.

Is UrbanMedium a one man outfit? A team of designers? Perhaps a corporate giant masquerading in an attempt to infiltrate the minds of urban youth? None of the above…

UrbanMedium is a husband and wife design duo (Derek and Heather) with a knack for creating sweet eye candy. Born out of a daydream back in 2000 and fueled by the frustration of the 9 to 5 grind, UrbanMedium creates the kind of art they want to hang on their walls, wear on their bodies, and plaster on their environments…and you’ll want to as well. Derek and Heather got their start in Los Angeles and now reside in the heart of the ‘dirty south’, Atlanta. 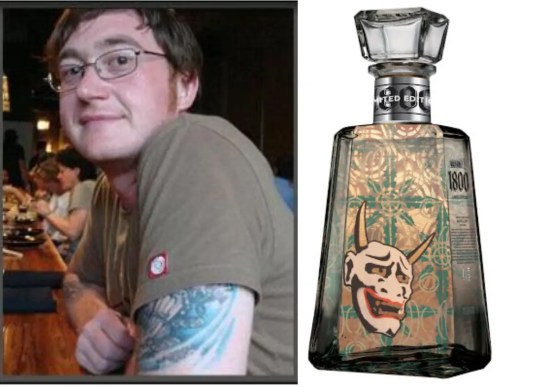 Artillery’s creativity is drawn from the aggressive energy of the drum and bass, dub step and metal constantly pouring through his headphones. Armed with some stolen X-acto blades, almost every color of Montana spray paint and his wry sense of humor, he has created an arsenal of hand-cut stencil designs featuring candy-coated colors and an almost Warhol-esque twist on banal imagery. He currently curates street art shows in Chicago’s eclectic Wicker Park neighborhood, giving an outlet to up-and-coming artists. Artillery’s latest works can also been seen on the street signs, buildings and bridges of Chicago—because even though he’s quickly becoming so much more than a “street artist,” that boy just can’t resist the urge to “get up.” Originally from Long Island, NY, Jeremy Bacharach moved to Chicago to attend The School of the Art Institute of Chicago. At SAIC he was Art Director of F News Magazine, winning several national design awards. By day, Jeremy works in interactive design for one of the largest agencies in the world, while also maintaining a small boutique practice designing for indie bands, cafes, and the like. By night, Jeremy creates in a variety of methods—painting, drawing, photography, and digital media. Inspiration often comes from vintage pop culture and from frequent trips to Mexico with his wife Ana, a writer. Many ideas are sparked by their creative collaboration, and an earlier version of Sirena del Desierto was made for her. Dosa moved to Atlanta during his freshman year in high school. He went on to study graphic design at the Art Institute of Atlanta. After working at a local design studio for a year, he continued his education at the University of Georgia, studying Digital Media and Computer Animation. Since then he has been exploring the content of his art rather than limiting his designs to the selling of products or services.

Commenting on current social issues, Dosa’s art can be best described as whimsical, dark and sometimes minimal. Although much of Dosa’s work has shadowy undertones, he emphasizes the notion of hope, the notion that outside forces will carry the subject matter and the viewer to his/her enlightened destination. This ideal is represented in numerous metaphorical ways and is carried out through his logo which bears the text: “Some of us will find our way home.”Dosa has shown at various galleries such as the High Museum of Art in Atlanta, and was a finalist in the NYC Cut and Paste Competition in 2007. 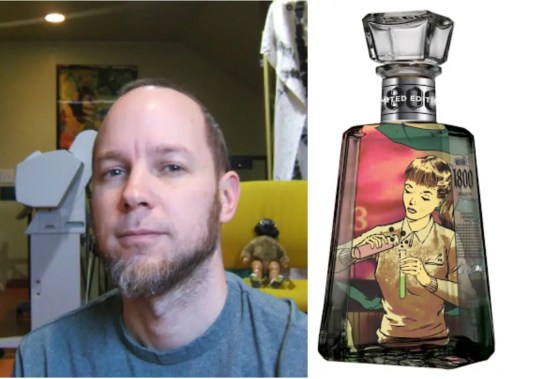 Chris Dean’s synthesis of offbeat imagery and stereoscopic process has brought the nostalgic of medium of lenticular pictures to a new level of artistry. The 40-year-old Detroit native began working with stereo images during his time at San Jose State University in the 1990s and sees a future of artistic opportunity for those working with related technologies.

Humor is seen as a force for good in Dean’s work, which often revels itself through the user interaction required by lenticular imagery. The odd historical context of lenticular work is embraced by Dean who often references popular culture himself. “While not underselling meaning, I consider fun to be a primary concern,” states Dean. Dean currently lives in the small community of Ferndale, north of Detroit, with his wife Heather and children Jasper and Otto.

Think you can do better? Well, now’s your chance to prove it.

Now 1800® is on the search for the next essential artists, via an innovative interactive project taking place on www.1800tequila.com . Any aspiring artist or fan can upload their art on a custom 1800® bottle and join the competition to win $10,000 and be featured in a national advertising campaign.

The site allows fans to log in and in 3 simple steps join the competition and also spread the word through a custom artwork widget to embed on their site. Connoisseurs can also view the gallery and vote on the thousands of submissions. Fans can upload up to 5 pieces of art until the contest ends in mid-December.

Below are screen grabs so you can see how easy the interface is designed for you to make and share your own bottle art (notice how soon they are going to let you design your own kicks too!) 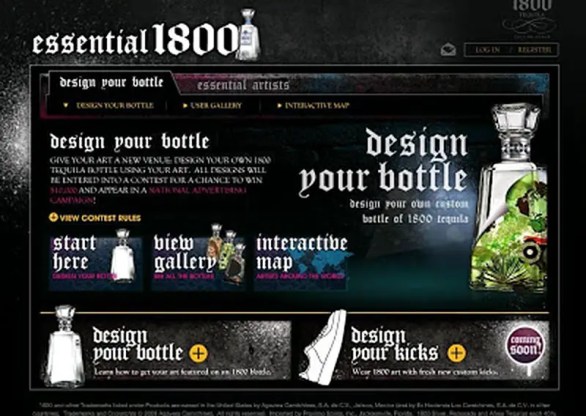 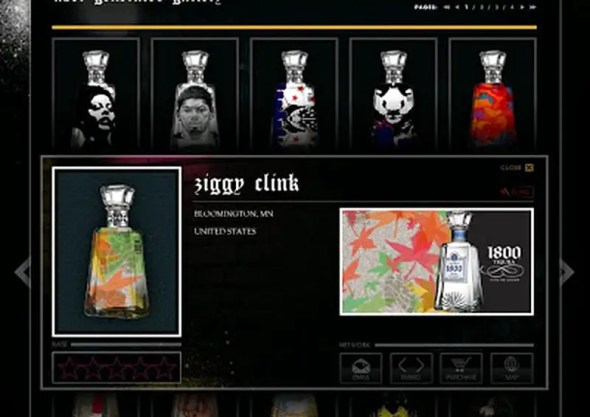 Some examples of your competition: Visit the site and design your bottle now!

A Look Inside The Moleskine Glass House Sketchbook