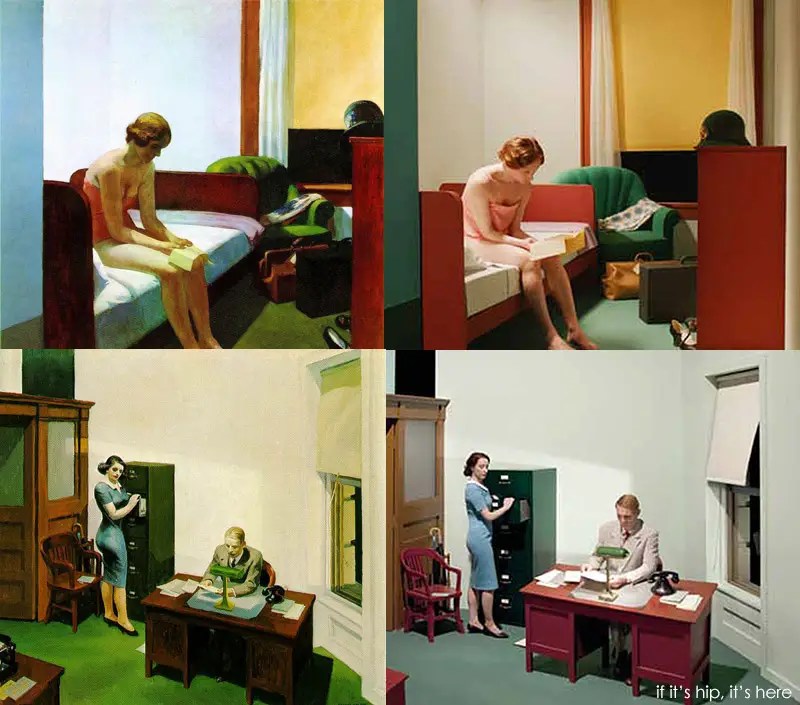 above left: original paintings by Edward Hopper and above right, the set designs for Shirley – Visions of Reality.

Director Gustav Deutsch brings 13 Hopper paintings to life in his film, Shirley – Visions of Reality, the story of a woman whose thoughts, emotions and contemplations lets us observe an era in American history. The set designs by Hanna Schimek are a fabulous reproduction of Hopper’s palette and light. above: an example of Hanna’s diligent research for the set designs

I have found 12 stills from the film and compared them Hopper’s original paintings for you below. The comparisons are followed by information about the film.

Comparisons of the Sets to the Actual Paintings: 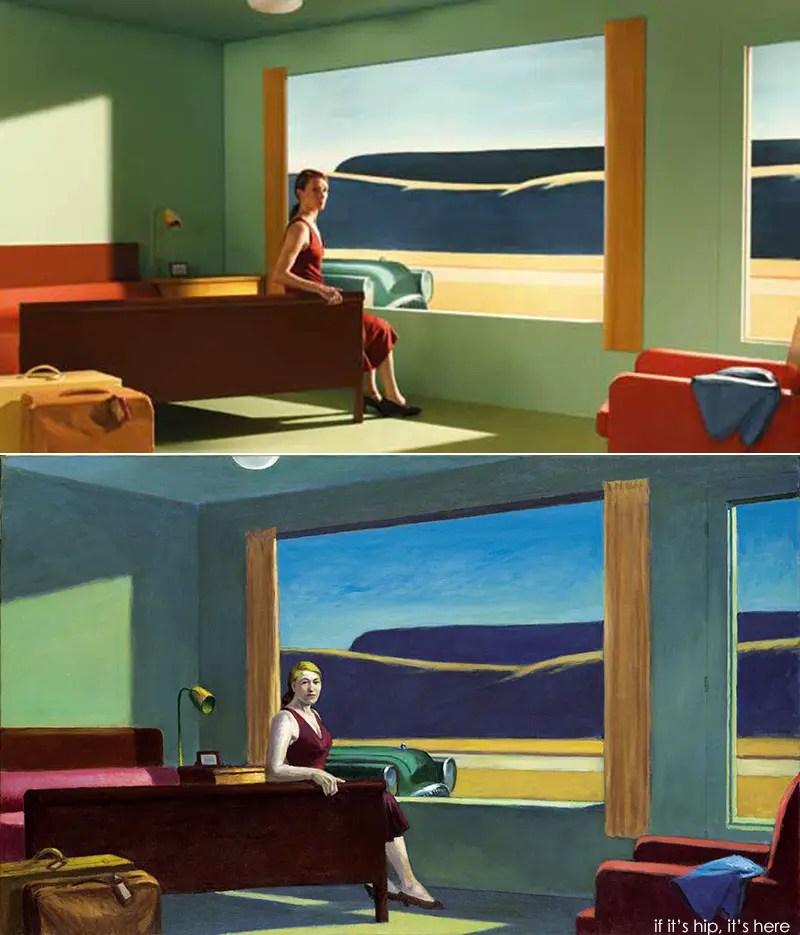 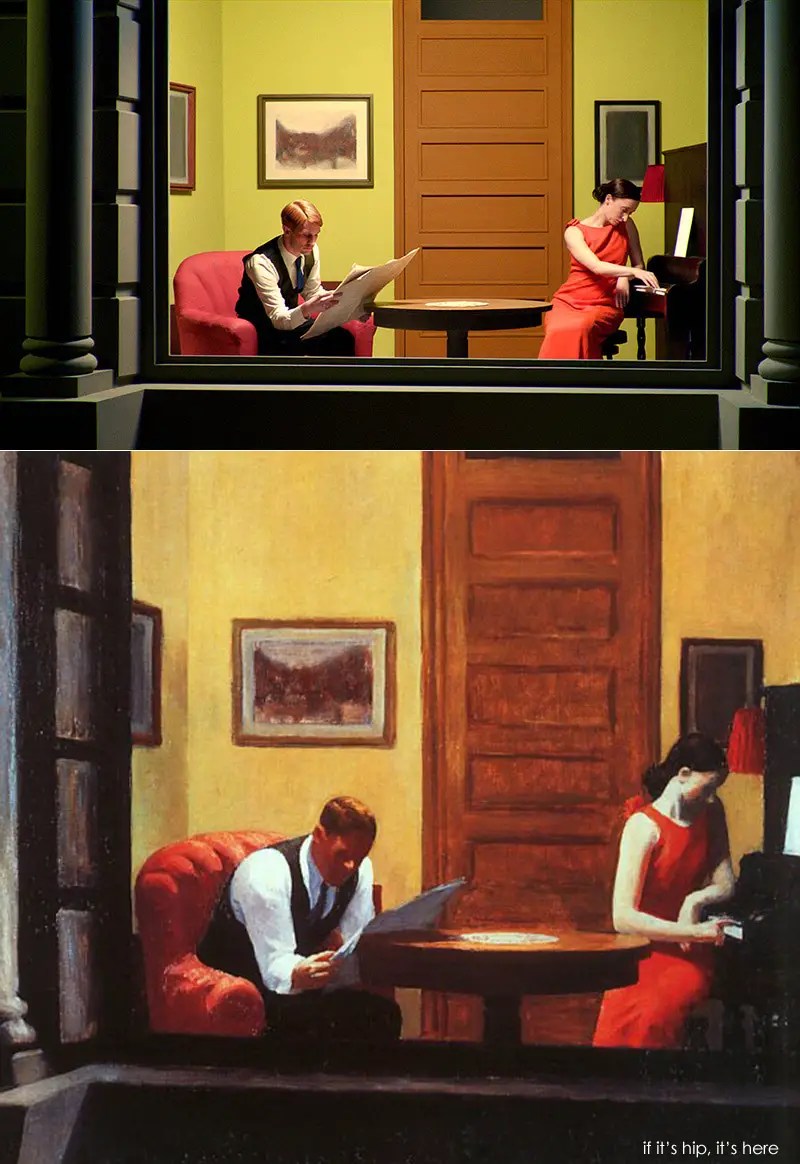 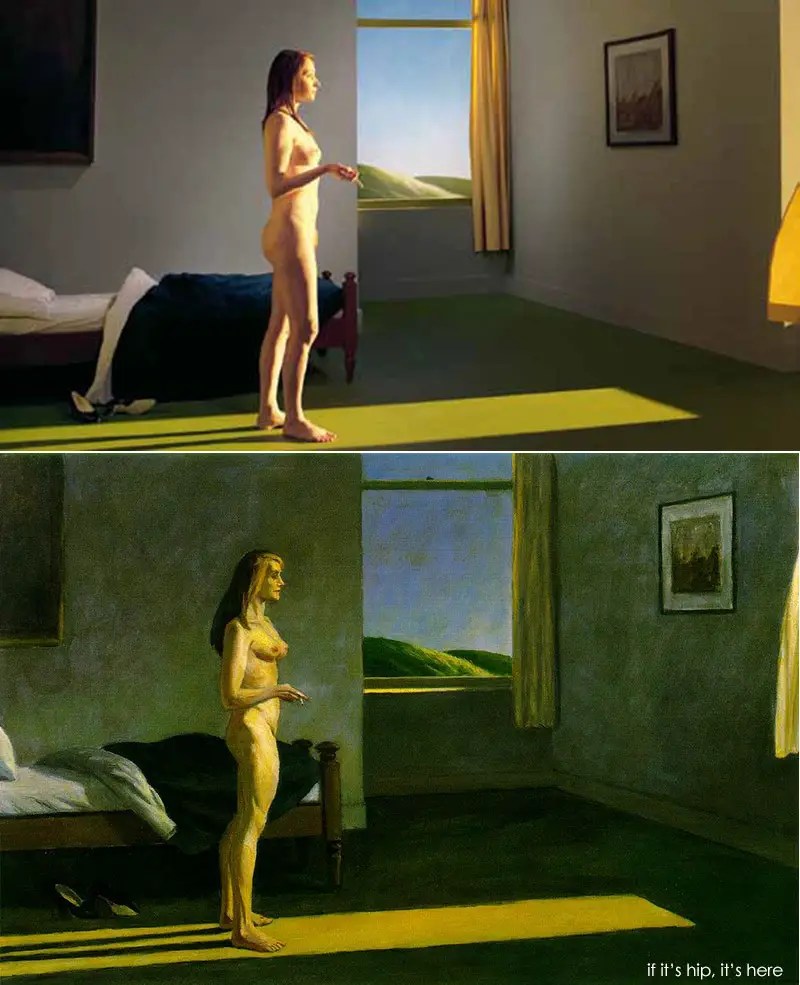 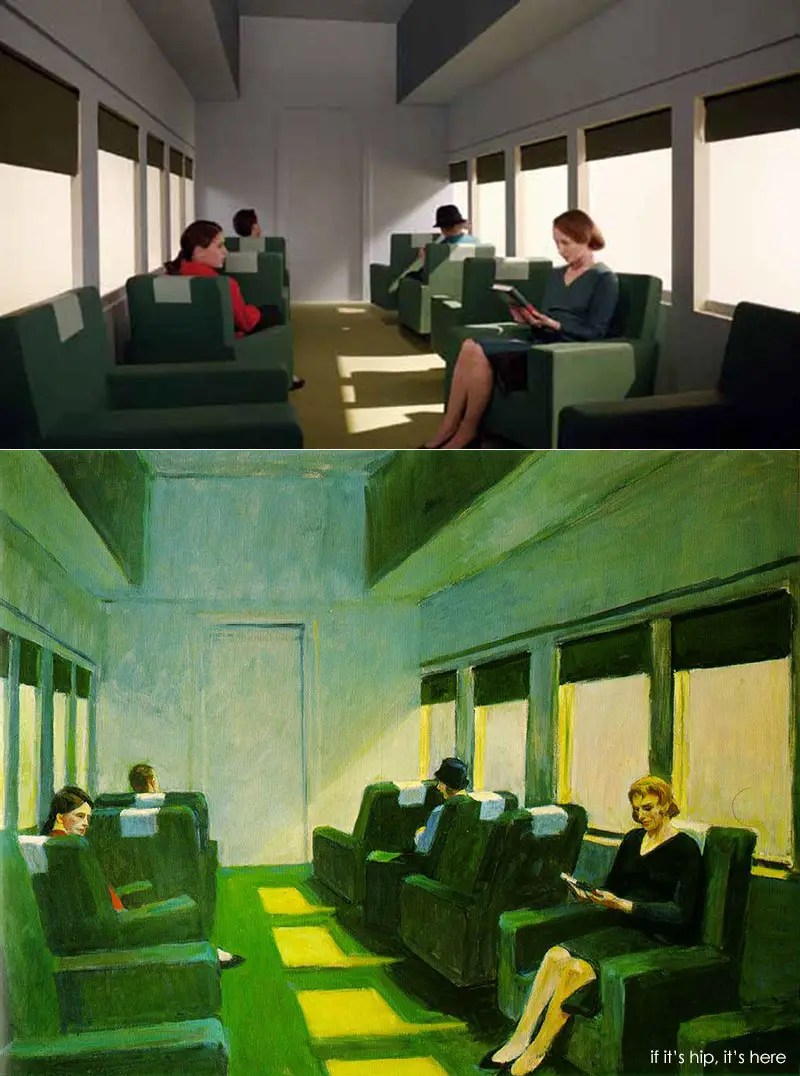 SHIRLEY – VISIONS OF REALITY – About the film The film synopsis:
Shirley is a woman in America in the 1930s, ‘40s, ‘50s, and early ‘60s. A woman who would like to influence the course of history with her professional and socio-political involvement. A woman who does not accept the reality of the Depression years, WWII, the McCarthy era, race conflicts and civil rights campaigns as given but rather as generated and adjustable. A woman whose work as an actress has familiarised her with the staging of reality, the questioning and shaping of it; an actress who doesn’t identify her purpose and future with that of solo success or stardom but who strives to give social potency to theatre as part of a collective. A woman who cannot identify with the traditional role model of a wife yet longs to have a life partner. A woman who does not compromise in moments of professional crisis and is not afraid to take on menial jobs to secure her livelihood. A woman who in a moment of private crisis decides to stick with her partner and puts her own professional interest on the back burner. A woman who is infuriated by political repression yet not driven to despair, and who has nothing but disdain for betrayal.

Directors statement:
As the starting point for this film, which has at its heart the staging of reality and the dialogue of painting and film, I selected Edward Hopper’s picturesque oeuvre, which on the one hand was influenced by film noir – in his choice of lighting, subject and framing as seen in paintings such as Night Windows (1938), Office at Night (1940), Room in New York (1932) and his direct references to cinema such as in New York Movie (1939) and Intermission (1963) – and on the other hand influenced filmmakers such as Alfred Hitchcock, Jim Jarmusch, Martin Scorsese and Wim Wenders. Based on my conviction that history is made up of personal stories and influenced by my reading of John Dos Pasos’ USA novel trilogy[1] in which the life stories and destinies of a few are representative of the wider public and social and cultural history of America, I have chosen an actress as the film’s protagonist – Shirley – through whose reflective and contemplative inner monologues we experience America from the beginning of the 1930’s through to the mid-1960’s. above: still from the set, photo by Michaela C Theurl

Here we have three decades, which have seen great upheavals at all levels – political, social and cultural – that have changed the country and its people forever: Pearl Harbour and WWII, the atomic bomb and the “conquest of space”, McCarthy and the Cold War, the assassination of John F. Kennedy and the start of the Vietnam War, Duke Ellington and the big band swing, Billie Holiday and the Southern blues, Elvis Presley and the rock n’ roll, Bob Dylan, Joan Baez and the protest song, The Group Theatre, The Living Theatre, Method Acting, The Actor’s Studio and its affiliated movie stars such as Anne Bancroft, Marlon Brando, James Dean, Marilyn Monroe, the Stock Market Crash, the Depression, Fordism and Interstate Highways, race riots and the Ku-Klux-Klan, the March on Washington and Martin Luther King. These events, names and legends, which are inscribed into our collective memory, evoke images and moods. Shirley experiences and reflects all this as a committed and emancipated actress with left-leaning politics. She enjoys jazz, listening to the radio and going out and loves film. She is a woman with strong opinions and both feet on the ground, even during times of personal or professional crisis. She is attractive, charismatic and likes to play outsider roles such as that of the prostitute Francie in Sydney Kingsley’s play Dead End. Besides art, she is also interested in socio-political issues. As an ensemble member of the Group Theatre and Living Theatre she combines art with her socio-political involvement. above: still from the set, photo by Jerzy Palacz

While Shirley and her partner Stephen, a photojournalist for the New York Post, share an apartment on only two occasions during these three decades, their private and professional lives are deeply connected: unemployment as a result of the Depression, disappointment after the betrayal of Group Theatre members in front of the McCarthy committee, repressions as a result of the politically-minded theatre, career retirement as a result of an ill partner, loss of the partner, retirement to the countryside and questioning of the effectiveness of art, emigration to Europe – personal destinies that are pursued in front of and influenced by world-changing events, cultural revolutions and socio-political upheavals.

History is made up of personal stories.

About the installation (Images after the text):

The point of departure of VISIONS OF REALITY is the world of visual arts.
The idea to explore the depiction of reality not only by means of film, but also with the aid of the exhibition medium, seems obvious.

The settings of VISIONS OF REALITY are created in co-operation with representatives from the fields of painting, architecture and music. The artist Hanna Schimek, for example, visualises the landscapes outside the windows in Hopper’s works and the pictures shown on the walls in the form of paintings corresponding to the real size. This once again focuses on the theme of the exhibition – staging reality, imagining reality – with the devices of painting.

Because the film sets were built for a specific camera position only – the camera always retains the angle of viewing of the paintings, i.e. with a skewed perspective and only true to detail from the viewing side – visitors will be able to move around in anamorphic three-dimensional reconstructions of Hopper’s paintings. Only then does it become clear that – contrary to the ostensible fidelity to reality – they actually often display false perspectives, unreal direction of light and shadows. The visitors perceive the barely noticeable distortions of perspective in the film and thus experience the tension between film reality and actual reality. On the one hand, the exhibition permits visitors to look “behind the scenes” of the cinema illusion machine while, on the other hand, giving them the opportunity to enter the film sets and thus putting them in the role of the actors in the film and the figures in Hopper’s paintings.

Images of the sets and installation from the exhibitions: A live video camera that is set up to record exactly the same detail of Hopper’s painting, also records the movements and activities of the public. The recordings are projected live in the rear part of the installation.

The Obama Presidential Portraits By Kehinde Wiley and Amy Sherald