` Art Made With Packaging Tape - If It's Hip, It's Here
Skip to content

Artist Mark Khaisman, originally from the Ukraine and now based in Philadelphia, uses packaging tape in a very different manner than you do. Applying layers of 2″ wide translucent and clear packing tape to backlit panels, he uses the play of shadow, depth, shape and color to create images of objects, portraits, patterns or motifs and the re-creation of movie and film noir stills. The results are reminiscent of digitized or pixelated photos, only with a depth and tactile quality that is unique to his work.

Art Made With Packaging Tape

The artwork with the lights off, compared to when it is illuminated from behind, is quite a transformation:

Here are some more wonderful examples of his work from various categories over the past few years. Images of his work on display: 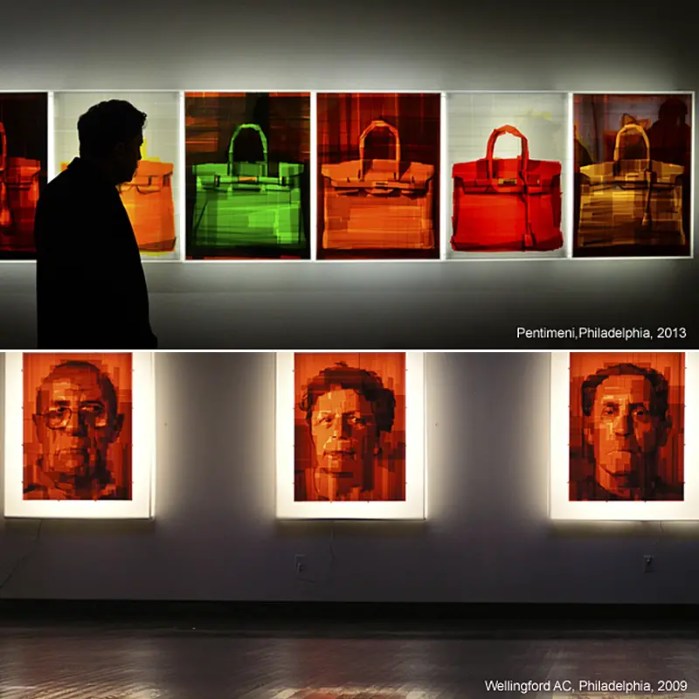 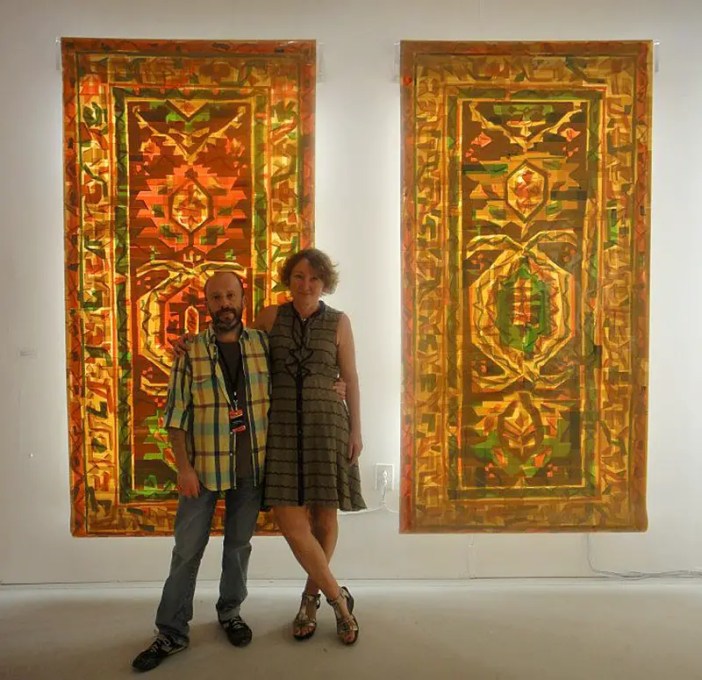 above: Mark and his wife Elena stand in front of His Antique Serapi Rugs made of packaging tape at Miami in 2012 (image courtesy of Facebook)

Mark explains his work as follows:

ON TAPE:
My works are pictorial illusions formed by light and shadow. Tape allows for images that communicate what I’m interested to do in a very direct way. My medium consists of three elements: translucent packing tape, clear acrylic or film panels, and light. By superimposing layers of translucent tape, I play on degrees of opacity that produces transparencies highlighted by the color, shading, and embossment (sic). There are some qualities of tape that make it unique for me as an art material: its banality, humbleness and its “throwaway” nature; its default settings of color and width; its unforgiving translucency; the cold and impersonal attitude that tape surface suggests.

ON PROCESS:
I apply a stripe of translucent tape on a clear backlit panel, and if I don’t like it, I peel it off. If I peel off less frequently than apply, a chance is that an image emerges. The whole process is reminiscent to the red room photo development in the pre-digital era, in a way, as my hands do the job, and my mind is witnessing the appearance of the image, then the only concern becomes to not under – or overdevelop it. Though I try not to lose control completely, I am not aware of every move I am taking, so by the time the piece is done, I don’t exactly know how it has happened, so I feel compelled to start a next image to make sure that I can do it again. ON LAYERS:
Layering tape, and even peeling it off, gives me a strange satisfaction. The only explanation for it I can offer comes from the Eastern cultural perception of the self as an onion, according to which if you peel off the outer layers of the onion you find more layers underneath. It makes you want to peel off more, and more, and more to find the pit, but when you finally peel it off to the very last layer you are left with nothing. I do it in reverse, but the feeling that it is only the different direction of the same process feels liberating.

ON PIXELATION:
I think that my art may be dabbed as post-digital, because although it has been inspired by the pre-digital movie media and developed in the context of digital pixels, it bypasses virtual reality finding itself in the blizzard combination of light, disposable plastic, and calculated rhythms of imaginable music all holding together with the stuck familiarity of random cultural references.

As soon as I pick up a 2-inch tape and start blocking the light streaming through the Plexiglas screen in attempt to render the image, the abstract field of intersections occurs. It consists of lighter and darker polygons with different lengths and angles of sides, which I refer to as pixels. To be immersed in the field of their vibrations and never loose photographical realism of an image woven into the fabric of rhythmic scores and luring into deception that image is all there is, is just too much fun. My goal can be roughly put into three subtasks, which are managing the scale, figuring out the ratios, and controlling intensity of light.

Light has a well-known affect of dispersing in geometrical cones, so that the greater the distance from the light opening the larger it seems. I play with the size of openings, placing the lighter and smaller ones next to the wider and darker to create contrast.

ON SUBJECTS:
The tape is the message. A parody on Marshall McLuhan’s famous quote could explain the superficial motives, which make up the work. Subjects are categorized into different groups: fragmented stills from classic cinema, iconic objects from art history, portraits. The works are exploring the familiar as our shared visual history; made of a familiar material formed into a familiar image, asking the viewer to recognize and complete the work, stimulating both memory and interpretation in the process.

But you can find several of his pieces at the following galleries:
In the USA, Mark is represented by Pentimenti Gallery
In CANADA, at Galerie LeRoyer
In KOREA, at Gallery YEH
In SPAIN at the Ampersand Foundation PF

images © and courtesy of Mark Khaisman and Pentimenti Gallery