` Wasabi and Salty Caramel Popcorn Vodka? Introducing Oddka, Crazy and Beautiful Flavored Vodkas From Wyborowa. - If It's Hip, It's Here
Skip to content 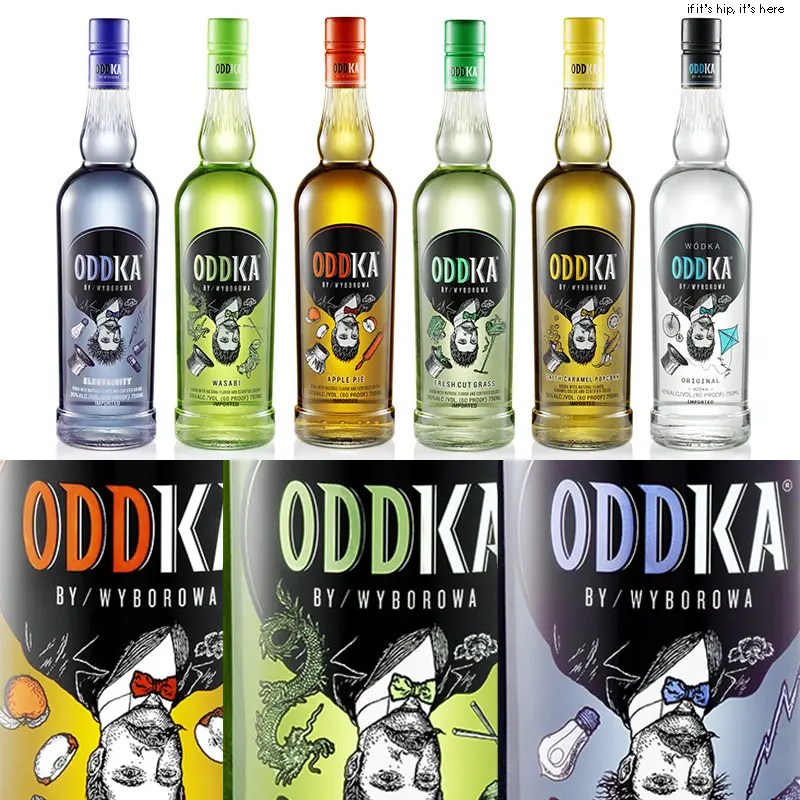 Oddka by Wyborowa, is a new line of creatively flavored vodkas by Pernod Ricard that will initially launch in select U.S. states including Alabama, Massachusetts, Pennsylvania and Rhode Island, prior to expanding its global distribution later this year.

The unusual beverages have an equally unusual spokesman, a 2-D illustrated gentleman named Wit (more on him later in the post). Oddka is available as an original, clear vodka and in five unconventional flavors, including Apple Pie, Electricity, Fresh Cut Grass, Salty Caramel Popcorn and Wasabi, each designed to inspire experimentation and self-expression. The flavors may be weird but bottles are beautiful. Take a look. The voice and inspiration of the Oddka brand is Wit Oddoski, a virtual character in the real world. He is a charismatic individualist and curious 2-D line drawing born in the age of invention and experimentation who marches to the beat of his own drum. He has made his social debut via Facebook  and Twitter (@WitOddoski), connecting with consumers and sharing imaginative “oddtail” cocktail recipes.

“ODDKA was created for the individual who seeks brands that are confident, expressive and challenge the norms, just like they do,” said Maxime Kouchnir, vice president, Pernod Ricard USA. “We are excited about the initial release of ODDKA in select states and sharing our curious approach with these individuals and provoking their senses.”

Here’s how Wit describes the unique flavors:
Original: I once meditated for a week. Afterwards I came up with the idea of a vodka-flavoured vodka. An idea so fresh, so elegant, so smooth, I couldn’t believe it hadn’t been thought of before. When I discovered it had, I thought I’d make it anyway.

Electricity: Ever wondered what a bolt of lightning tastes like? Me too. That’s why I created this shockingly good tongue-tickling vodka. Now lightning can strike as often as you like.

Salty Caramel Popcorn: I love the movies, though personally I’ve never seen the appeal of those 3D ones. If this flavour was a film it would be a caramel comedy with a sea salt subplot and a warm, feel-good ending.

Fresh Cut Grass: One day my llama distracted the janitor when he was mowing my factory lawn and there was an accident. A fortuitous accident with a crisp and citrusy outcome.

Wasabi: At Ninja school I was taught the saying, ‘The Wasabi-eating Ninja Laughs Last’. I’m still trying to figure out what it means, but in the meantime have created this fiery flavour to creep up on your taste buds. Enjoy.

Apple Pie: Inspired by Grandma Oddoski’s famous apple pies. I gave her my word I would never reveal her secret ingredient. This sweet tasting apple and cinnamon flavour vodka is a tribute to that promise. To connect fans with the brand’s experimental personality, ODDKA launched a free “ODDstache” mobile app, available on iTunes. Men and women alike can grow their very own ODDstache on a mobile photo of their choice. To mature, the mustaches need tending; growth can be accelerated with grooming, feeding and by sharing with friends on Facebook—the more “Likes” received, the more ODD it will grow.