UNICEF has launched three animated shorts to help frame positive perceptions towards the tens of millions of children on the move globally as a result of war, conflict, climate change and poverty.

Sixty-five million children around the world are on the move – running from conflict, poverty and extreme weather – looking for a place to call home and a better life. They are among the most vulnerable people on earth, children on the edge.

UNICEF enlisted ad agency 180LA to conceive and produce a series of short films from various animation houses* about the plights of these children, hoping to inspire acts of humanity.

Called Unfairy Tales, the three animations (all shown in this post) are true stories of the flight of children from conflict that explain the horror behind why they fled. They have been animated in the style of a fairy tale and will be supported by an interactive e-book experience also called Unfairy Tales.

The Unfairy Tales are part of an initiative, #actofhumanity, emphasising that children are children, no matter where they come from, and that every child has rights and deserves a fair chance.

“No matter where they are in the world, when refugee and migrant children reach their destination, it is the beginning of another journey, not the end of the road,” said Paloma Escudero, UNICEF’s head of communication.

“Ivine and the Pillow” The true story of 14-year-old Ivine and her pillow, Pillow. After a perilous escape from Syria, Ivine settles at a refugee camp in Germany only to face new challenges.

“Every day, everywhere, people are helping them out with small acts of humanity. These acts rarely make news but they are making all the difference in the world to individual refugee and migrant children. UNICEF wants to showcase these #actofhumanity to inspire others and show the way forward,” Escudero said.

“Malak and the Boat” The tale of a 7-year-old Syrian refugee’s voyage in a leaky boat.

”The stories of the three children are not unusual. At least 65 million children and young people globally are on the move – escaping conflict, poverty and extreme weather – looking for a more stable life and a place to call home,” Escudero said.

“Mustafa Goes for a Walk” 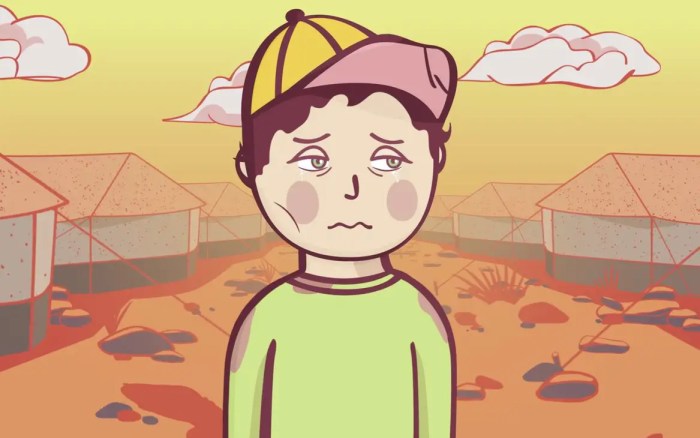 The third animation depicts the story of Mustafa, who after fleeing his home, wonders who is left to be his friend. Ever wonder how a child feels when forced to flee home? Leaving behind your loved ones and prized possessions is a traumatic separation. This is Mustafa’s story.

180LA Executive Creative Directors Rafael Rizuto and Eduardo Marques said, “The Unfairy Tales picture with heartbreaking detail what it’s really like to be a child in that situation, showing that some stories were never meant for children. We needed to tell these stories to make everyone think about it.”

UNICEF will engage audiences with social media messaging and intends to produce more animations. UNICEF’s ask is simple: Show an #actofhumanity towards refugee and migrant children and young people. Use #actofhumanity to share stories and inspire us and others.

Learn more about what you can do to help here

"The Developer", A Beautiful Samsung Gear Spot Celebrates A Real Project by The Messi Foundation.

Kate Moss Struts Her Stuff In Thigh High Boots For Stuart Weitzman. A Look At The Film, The Boots And Behind-The-Scenes.