` The Batumi Aquarium by Henning Larson - If It's Hip, It's Here
Skip to content 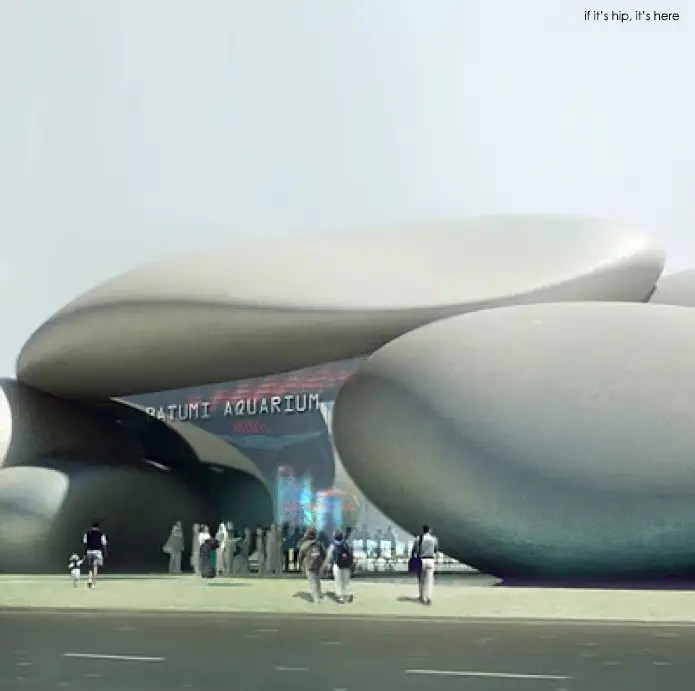 Henning Larsen Architects has won first prize for its significant design concept for a new aquarium in the Georgian seaport of Batumi.

The invited competition took place in spring 2010 with the German architecture company Drei Architekten and the two American companies PJA Architects and Pryor & Morrow Architects among the participants. The 2,000 m2 aquarium will replace the previous aquarium of the port and will be situated on the beach side of Rustaveli Str. adjacent to Batumi 6 May Park featuring a Dolphinarium and Zoo.

Inspired by the characteristic pebbles of the Batumi beach (above), continually shaped by the wash of the waves through millennia, the building (below) stands out as an iconic rock formation visible from both land and sea. The formation constitutes four self-supporting exhibition areas where each of the four stones represents a unique marine biotype – the Aegean Sea & the Mediterranean Sea, the Indian Ocean, the Black Sea & the Red Sea and finally the more interactive exhibition space for teaching and “edutainment”. The four dispersed aquarium exhibitions are connected by a central, multipurpose space including café, auditorium and retail functions with views of the black sea and Batumi beach as scenic backdrop. Visitors gather in the central space to convene, play, eat, shop and relax before continuing their adventures through the exhibitions. The central, multipurpose space in connection with the aquarium features a café and retail functions and its flexible layout makes it well-suited for presentations and workshops.

“It has been important for us to create a design that relates explicitly to local characteristics of Batumi while at the same time reaching out to the world”, says Anders Park, who is project manager for a number of Henning Larsen Architects’ projects in Georgia. “The aquarium interacts with its surroundings and becomes a manifestation of nature itself”.

Unfolding around the aquarium, a landscape of different sea archipelagos provides attractive opportunities for innovative outdoor research and learning, public space and meeting places along the beach. The building’s significant expression inspired by nature will not only make Batumi Aquarium a spectacular new landmark in Georgia but also a state-of-the-art contribution to exploring life underneath the sea surface.

Ccross sections and plans below: The City of Batumi

Batumi is the capital of the south-western province Adjara in Georgia. The city has approx. 120,000 citizens and is situated by the Black Sea, approx. 20 km from the border of Turkey. Batumi is a very active tourist city and commercial port. Unlike other cities in Georgia, the houses of Batumi are richly coloured and the city bears the mark of being a sailor city with a number of restaurants and cafés. Batumi also has wonderful beaches and many small hotels.